BMW i3 tuned by 3D Design and Studie Japan

Home » BMW i3 tuned by 3D Design and Studie Japan 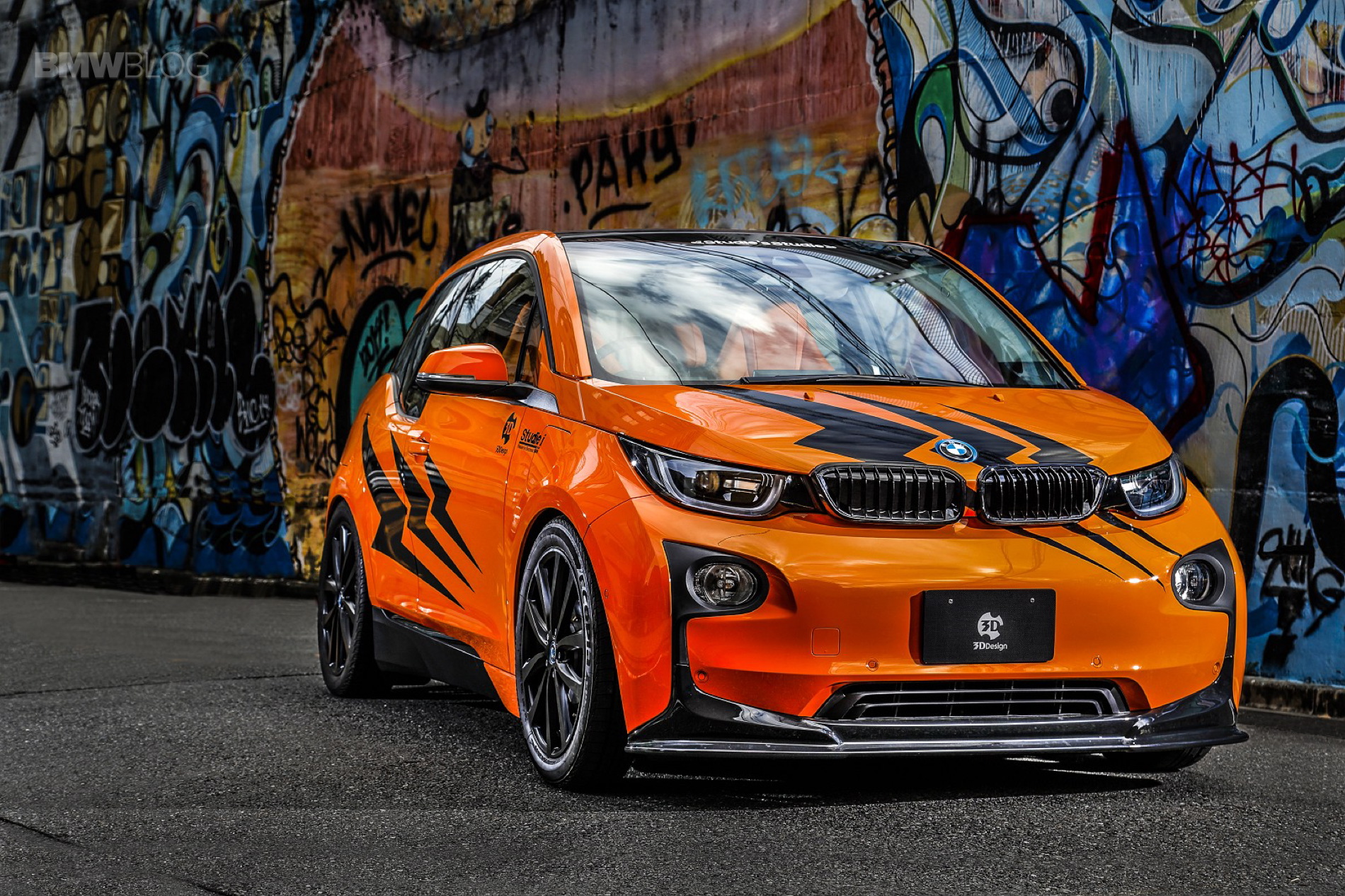 Over the past decade Studie Japan has become synonymous with the BMW tuning scene. Headquartered in Japan, Studie evolved from a single tuning shop into 6 distinctive locations, including their most recent project Studie Thailand. The partnership between Studie and 3D Design is one that has evolved in lock-step.

Their paralleled growth often leads to the misconception that they are one in the same, but instead have worked in perfect harmony since the late 90’s. Given the evolution of both Studie and 3D Design it is only natural that both worked together in individualizing the BMW i3. 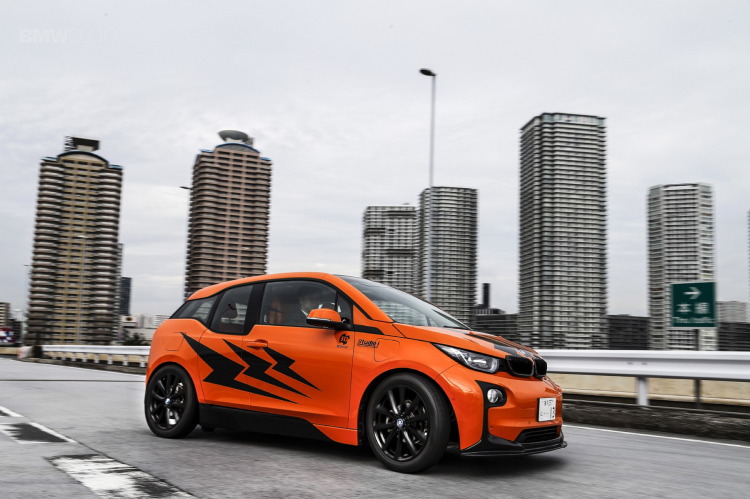 As BMW begins to usher in their new wave of electric vehicles, it is only natural that tuners and enthusiasts begin to tinker with the new efficient vehicles. The Studie/3D Design i3 project was created with two goals in mind, to push the boundaries of the chassis and more importantly for personal enjoyment.
In a effort to make the i3 stand out, Studie opted for a complete color transformation of the i3 in BMW’s Fire Orange. The Fire Orange is used on the infamous E92 M3 GTS and the North American E92 M3 Lime Rock Park Edition. The driver and passenger then  received a set of Recaro LX-F seats wrapped in a combination of orange leather and suede.  The dash trim was finished in the same BMW Fire Orange featured on the body of the car creating a cohesive theme for the vehicle. 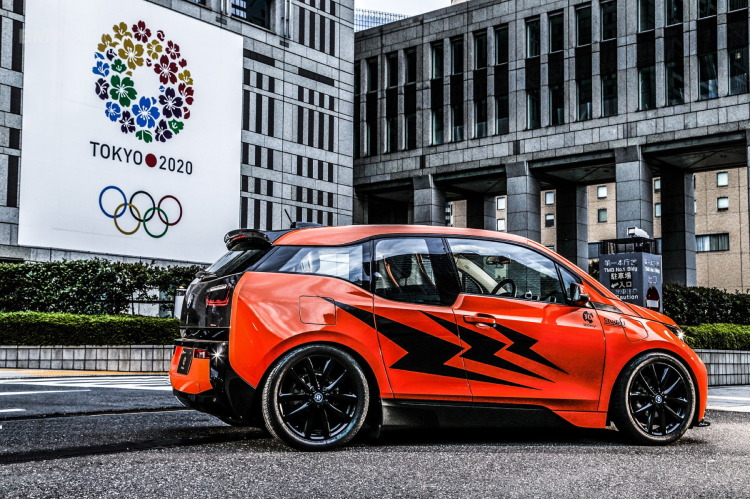 With the i3’s newly found sporty color transformation, the next area that needed attention was the ride height. The Japanese version of the i3 is already 20mm lower than worldwide i3’s, but for the aggressive color change an even lower vehicle stance must be achieved. As a solution, Studie is developing a suspension setup that brought the car down an additional 30mm. 3D Design built upon the flowing lines of the i3 with a more pronounced front lip spoiler and roof spoiler. The two components provide some much needed balance to the boisterous fire orange paint. Taking inspiration from the F chassis ///M cars, Studie built a custom front grill set with integrated blue LED’s. 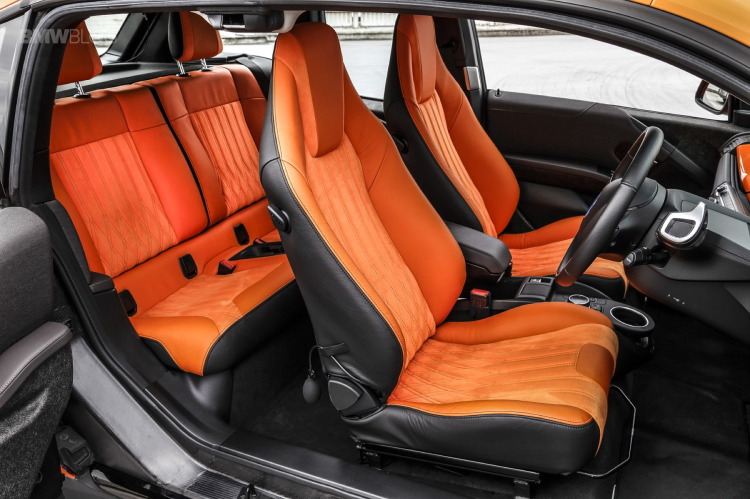 Driving the BMW i3, it is easy to see why people are falling in love with the BMW electric vehicle program. The vehicles are quick, sporty, and more importantly responsible. For the times that we desire a little more than the sound of music, Studie retrofitted the BMW active sound in the cabin. This sound is programmable to the tune of an inline 6, v8, v10, and v12. The car quietly cruises around on a set of MAK wheels, but Studie is currently working with other premium manufacturers to develop a wheel program for the i chassis cars. The Studie/3D Design i3 is a project that encompasses everything good about modifying a car, having fun and differentiating yourself from the crowd. 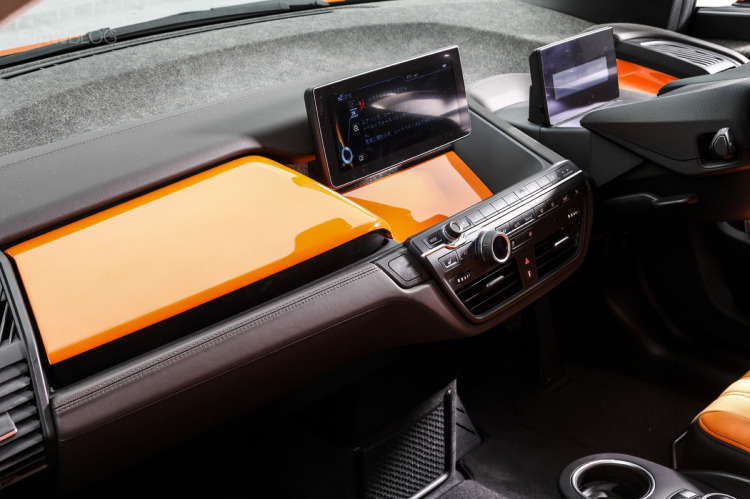 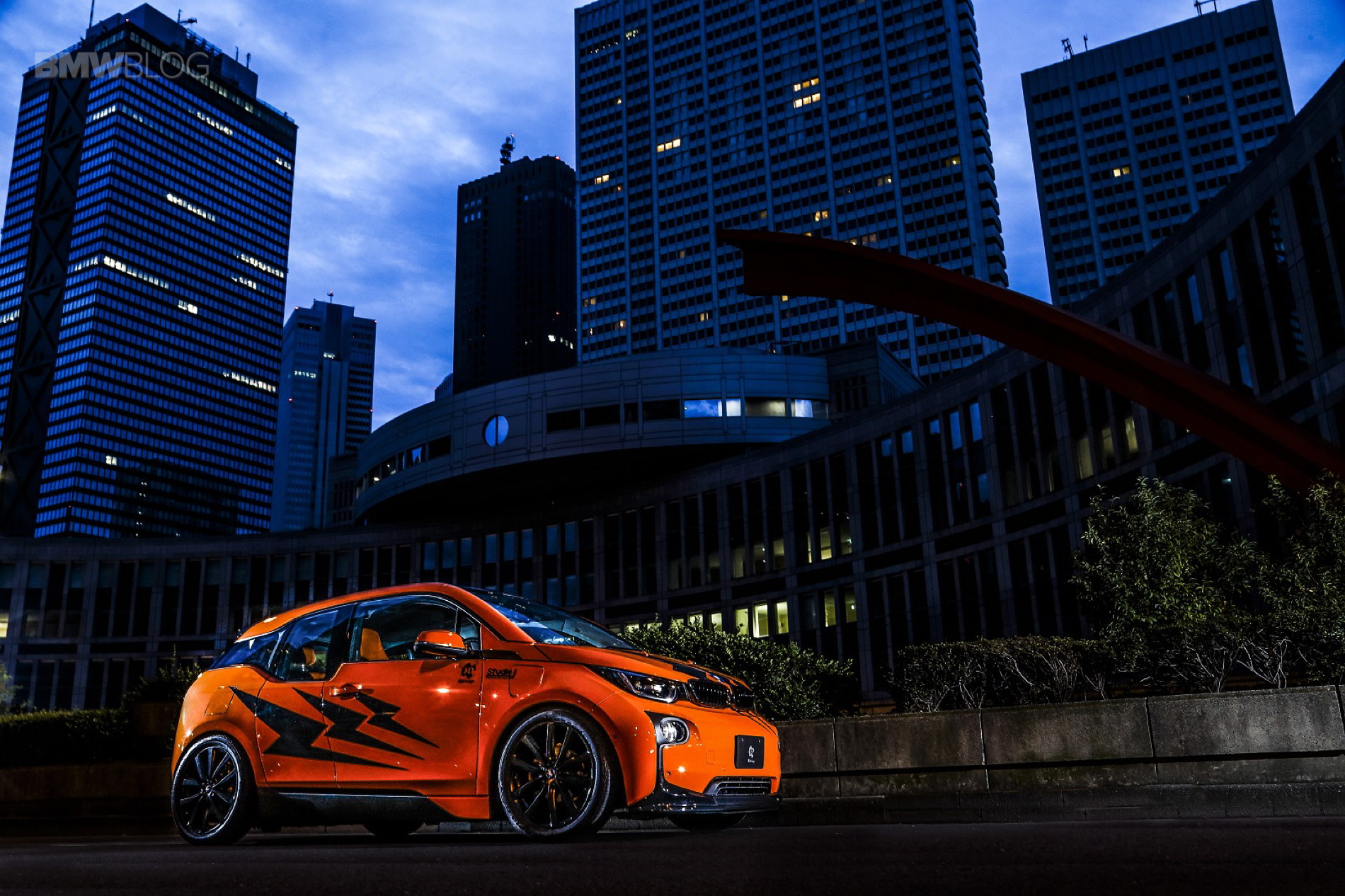 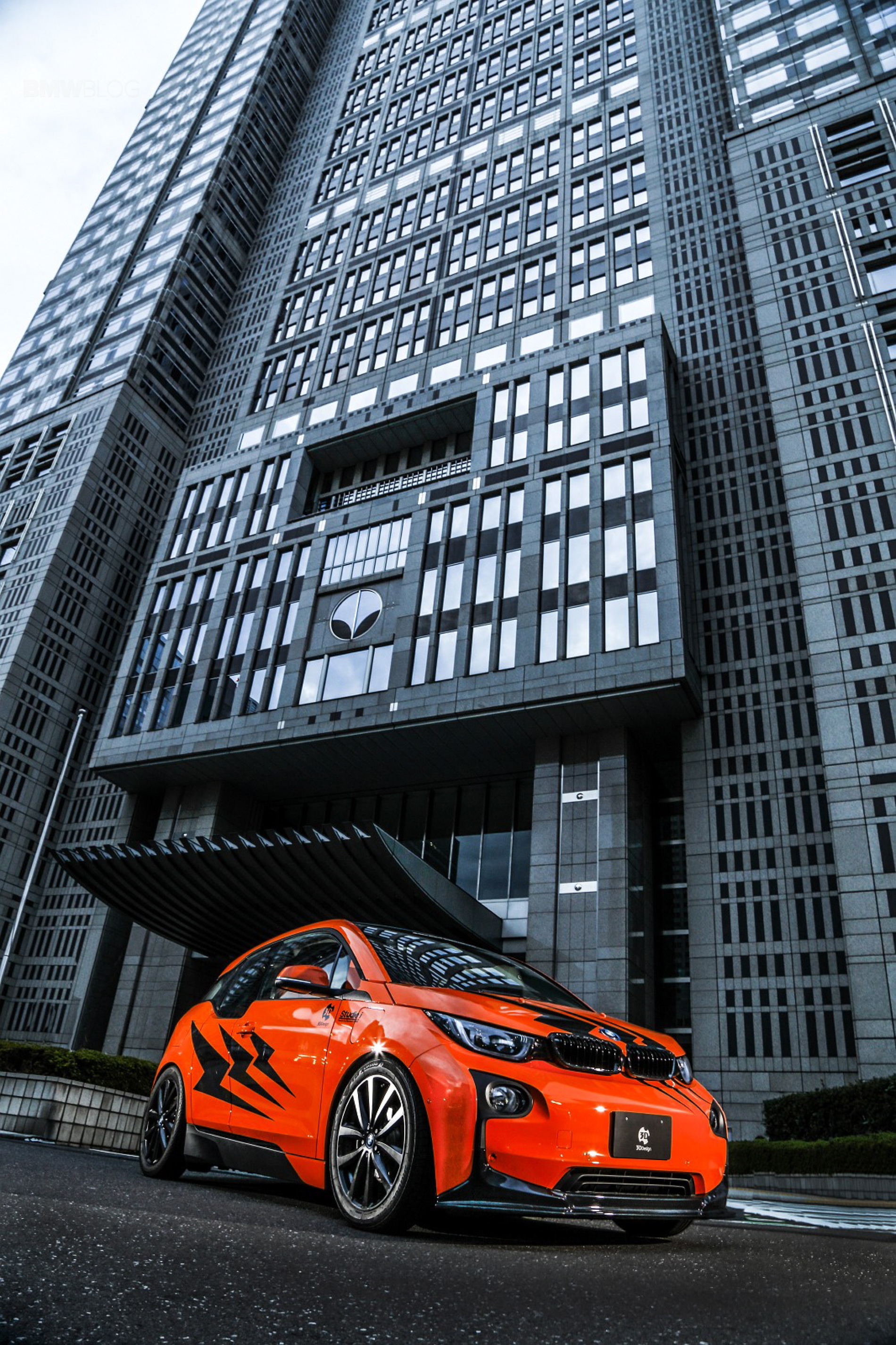 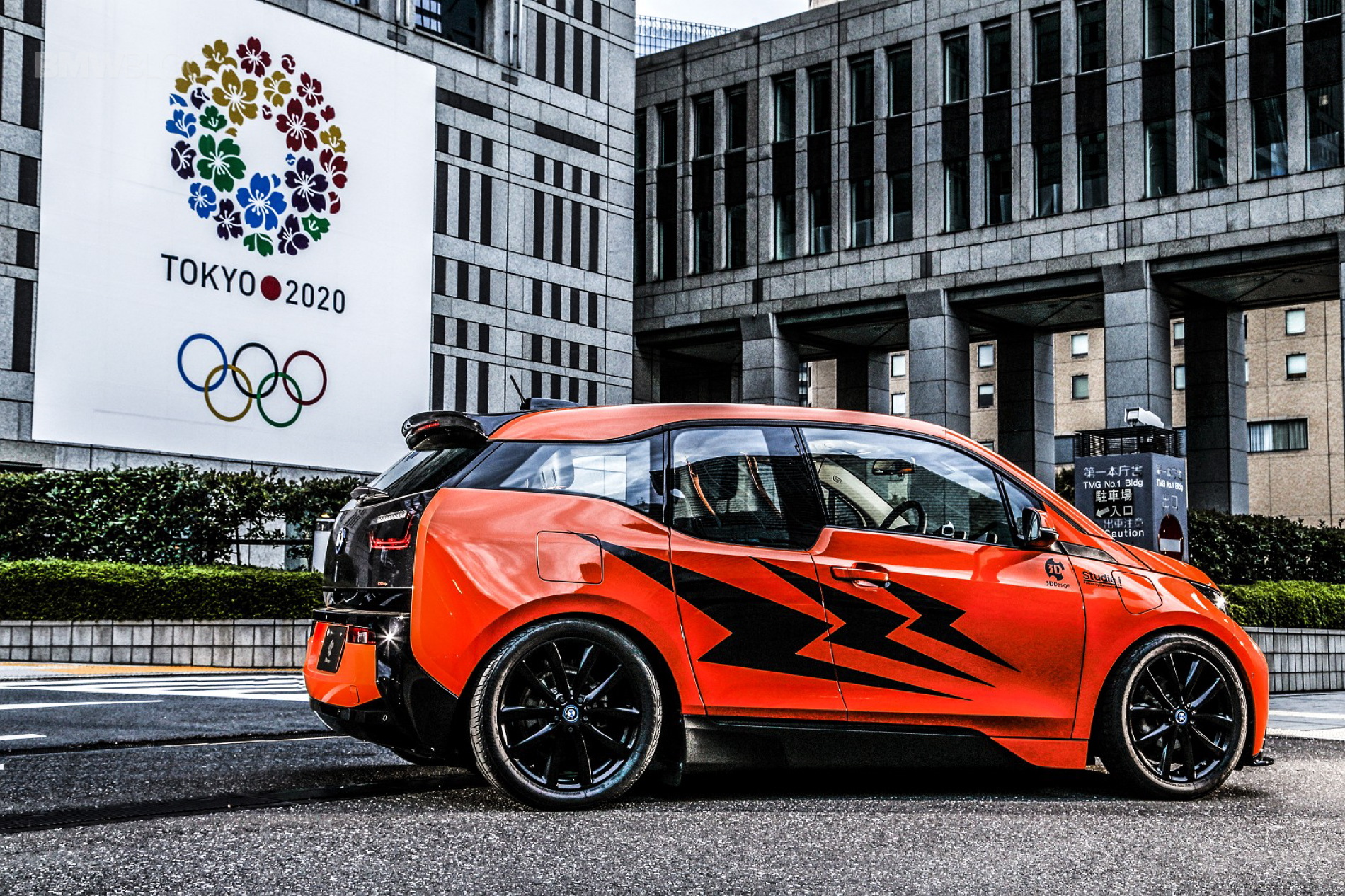 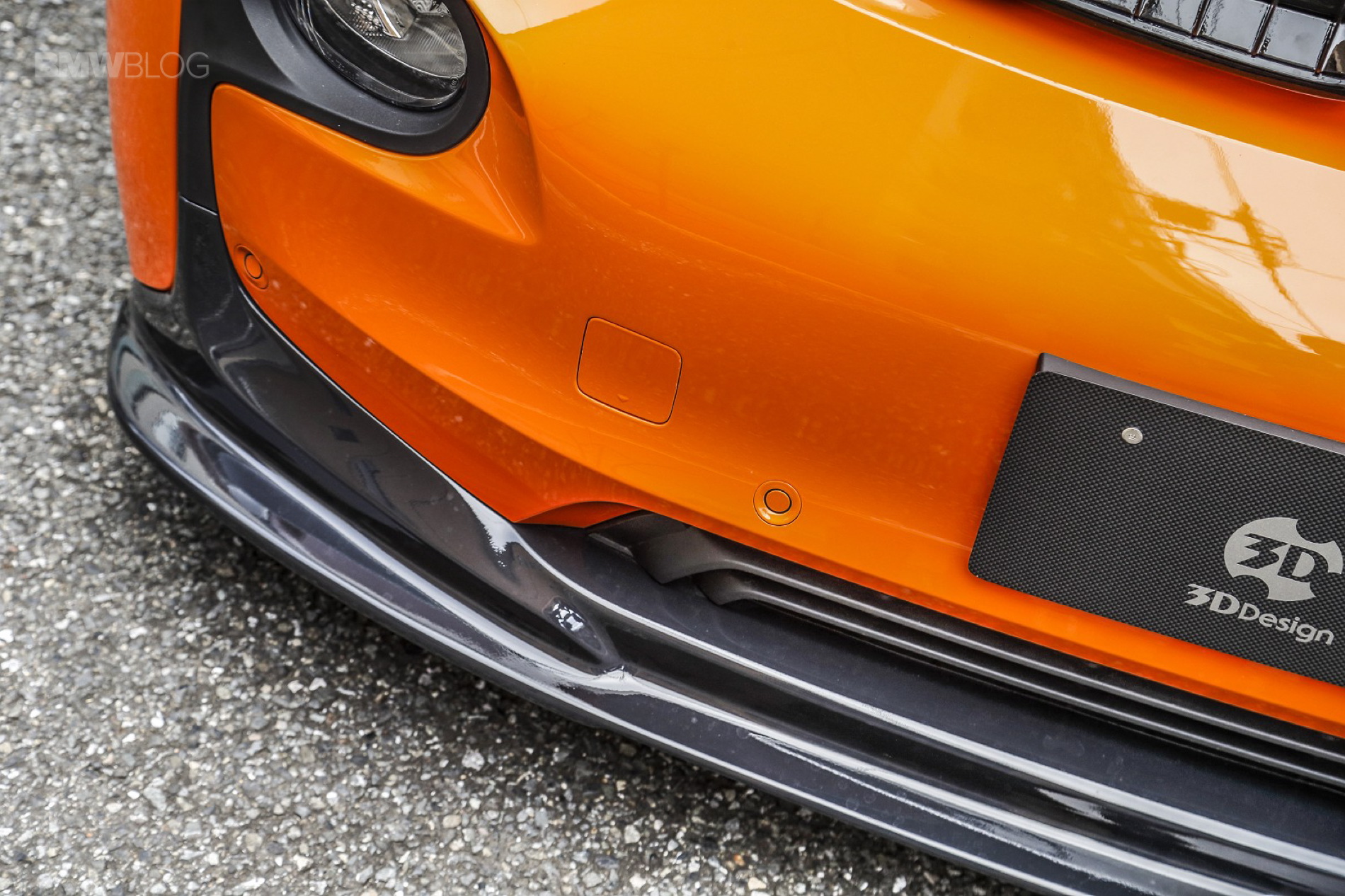 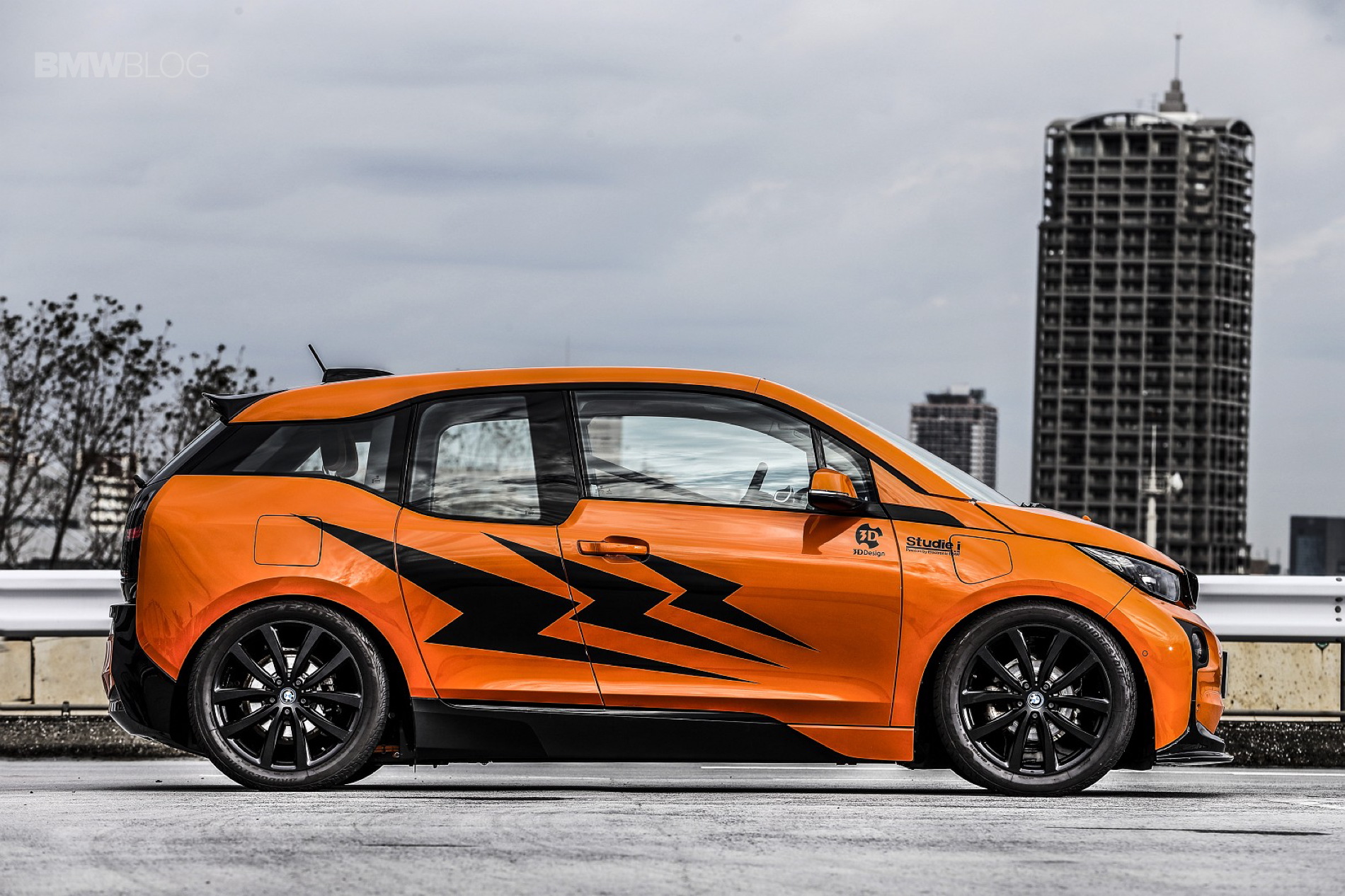 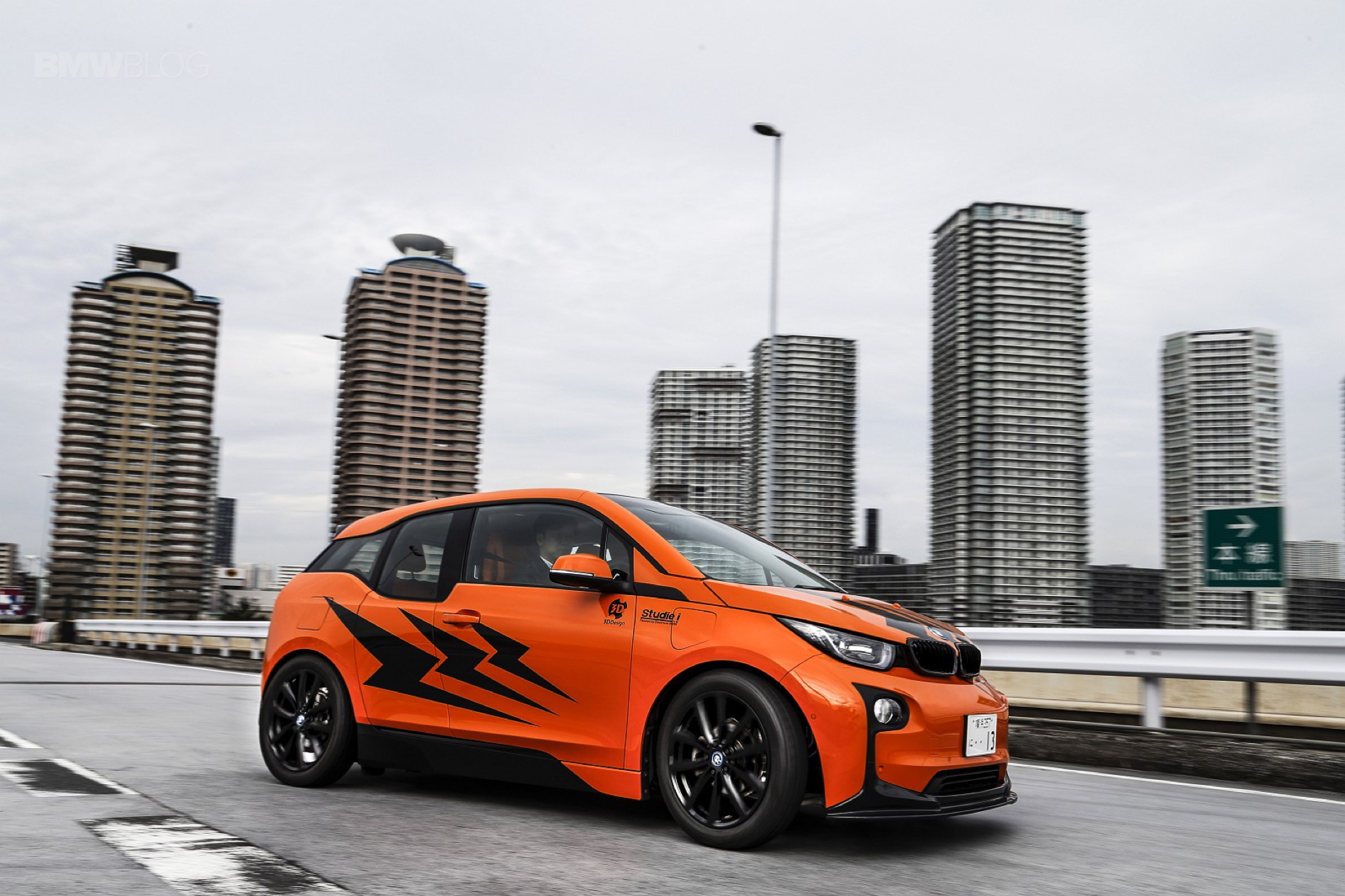 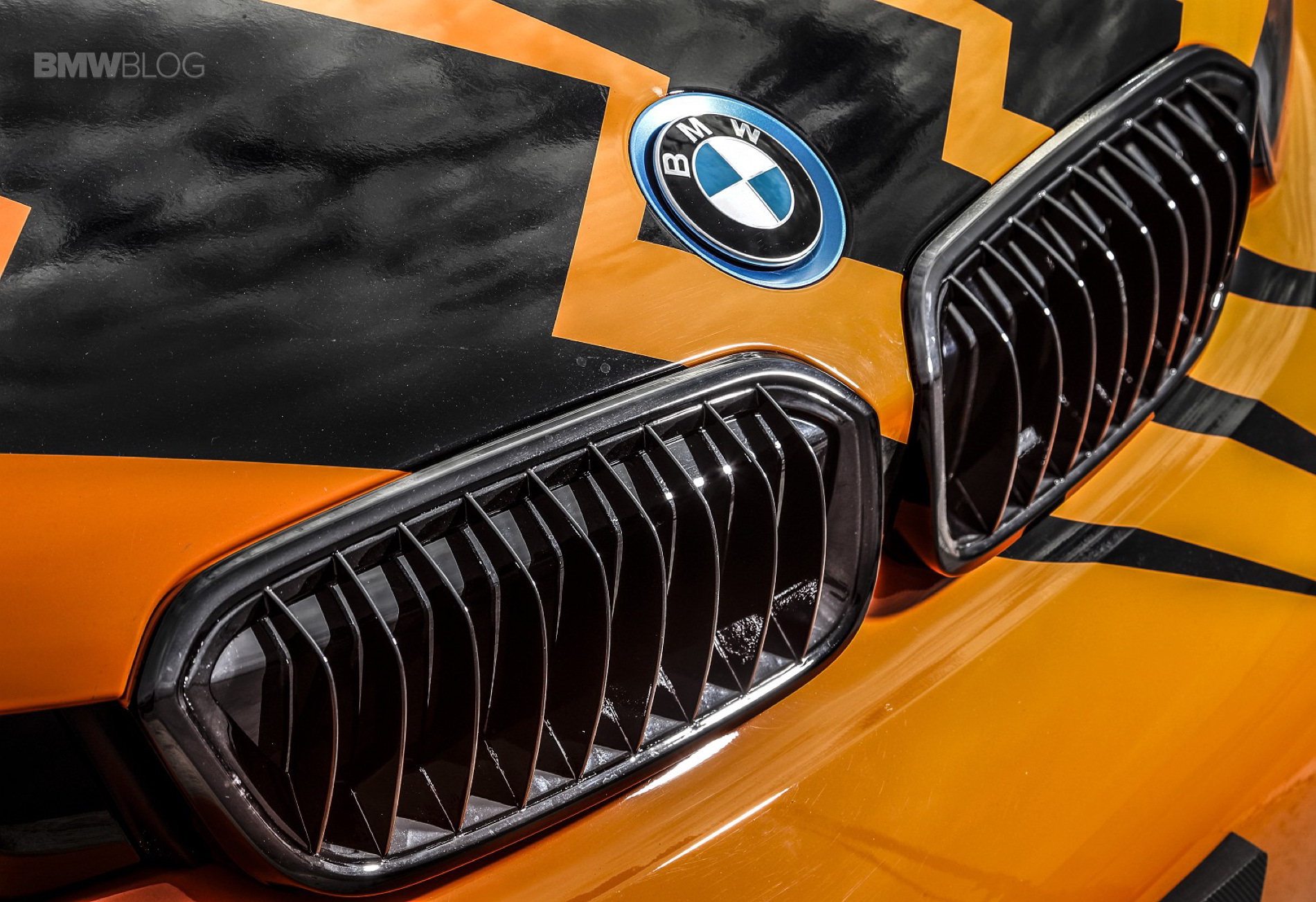 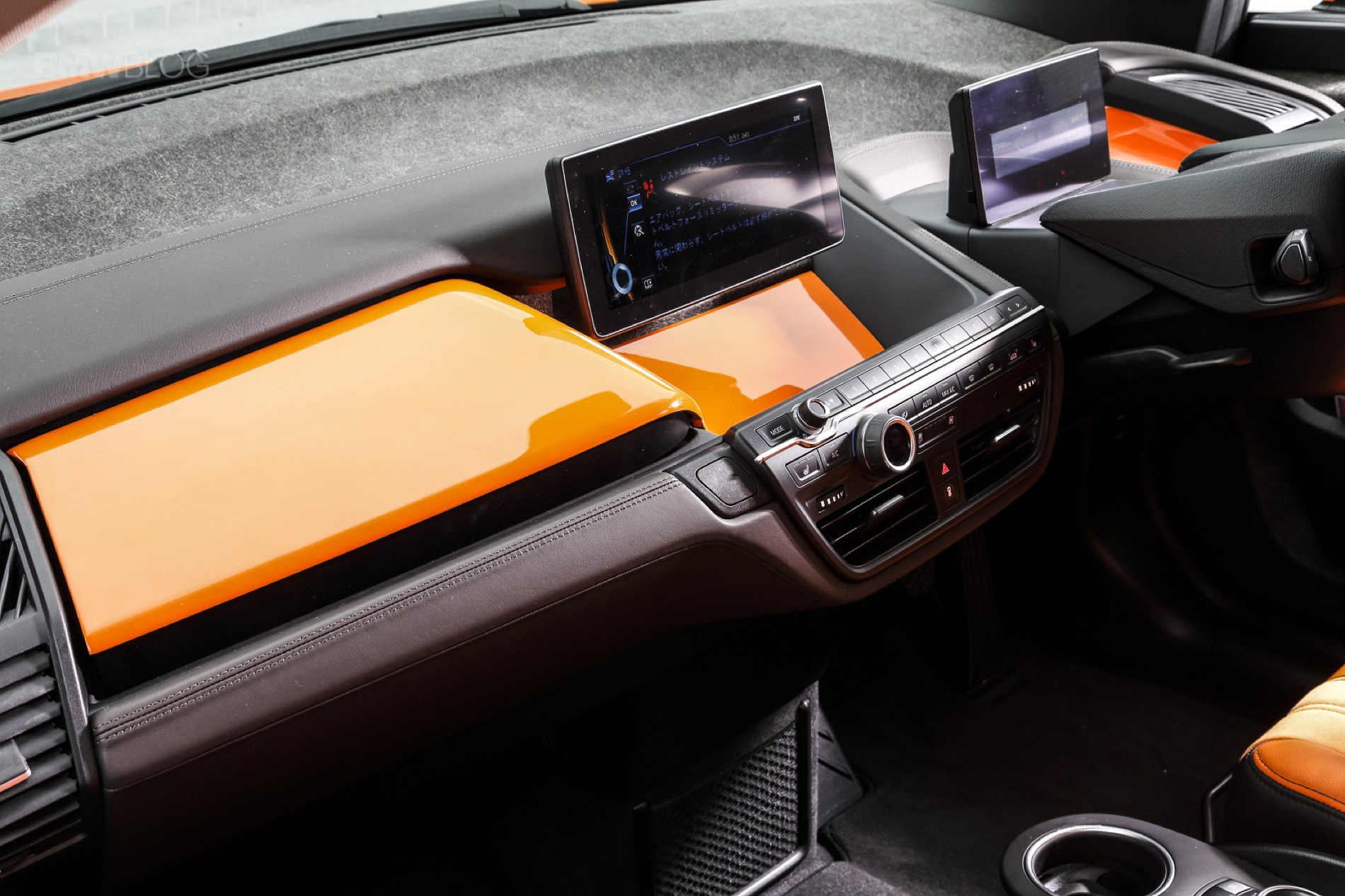 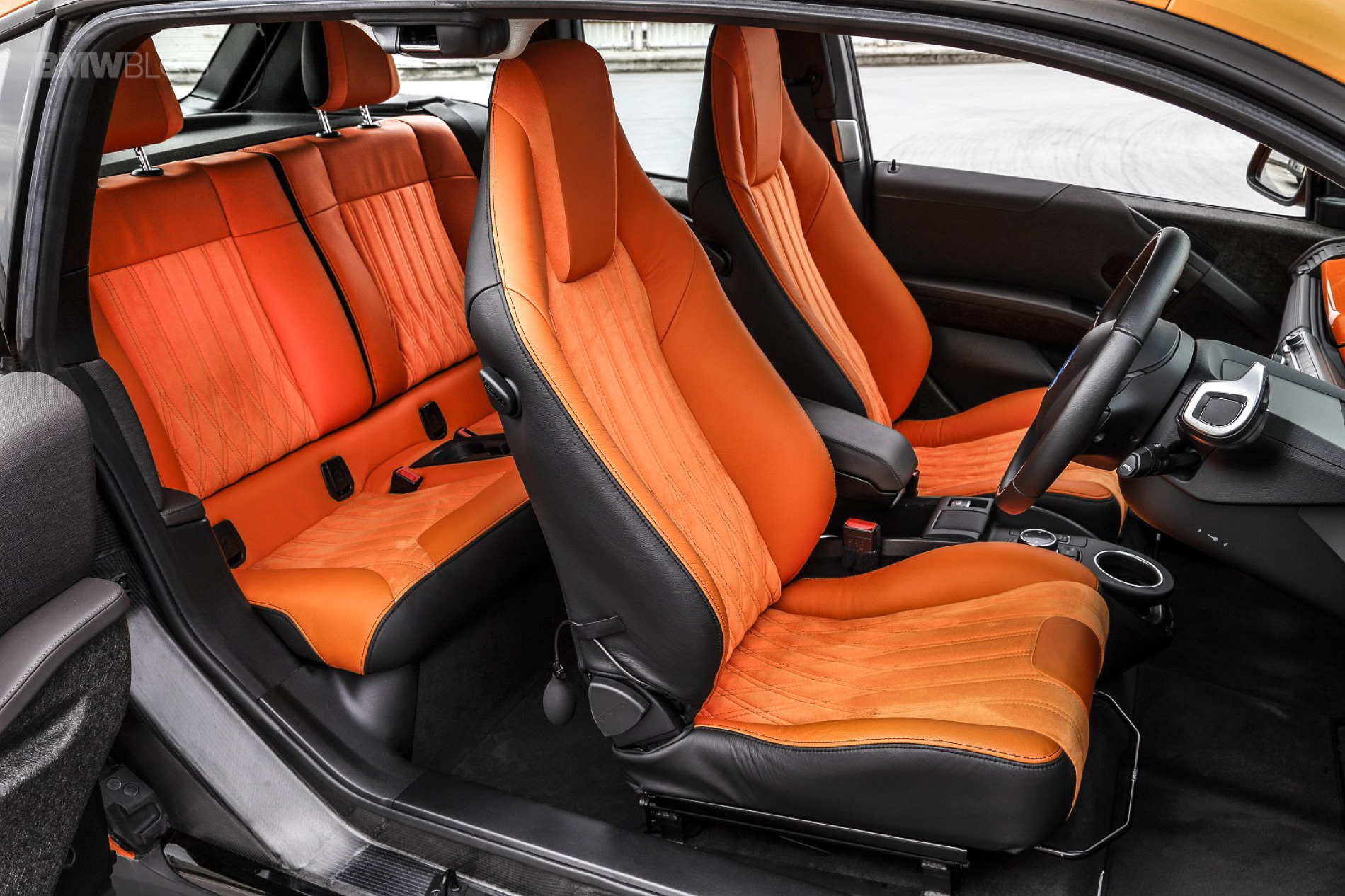