BMW i3: The Emperor of Efficiency

Home » BMW i3: The Emperor of Efficiency

When the EPA range and efficiency figures were announced couple months ago, the BMW i3 became the most efficient vehicle available in America. Here in the US, the EPA uses “MPGe” as its official efficiency metric to compare the energy consumption of alternative fuel vehicles. That stands for “miles per gallon equivalent”, and unfortunately most people don’t really understand what it means or how that really translates to what the vehicle will cost them to operate. The consumption rate, or how many miles the car will travel on one kilowatt of electricity, (mi/kWh) is a metric that I, and many other electric vehicle owners prefer to use. 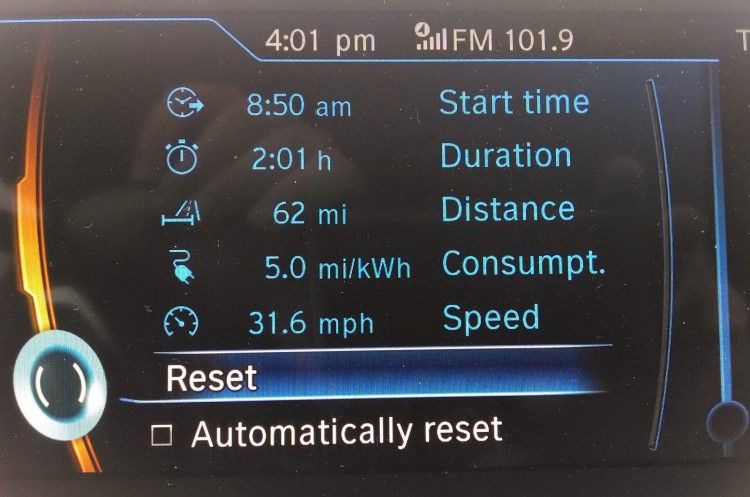 “The ratings are based on EPA’s formula, in which 33.7 kilowatt hours of electricity is equivalent to one gallon of gasoline, and the energy consumption of each vehicle during EPA’s five standard drive cycle tests simulating varying driving conditions.”

The BEV i3 received a combined (city and highway) MPGe rating of 124 miles and the i3 REx (like I have) achieved a combined score of  117 miles. I’m not a huge fan of this rating system because all it really does is compare the efficiency of my car to the energy in a gallon of gas. One of the problems with that though, is gasoline engines are very inefficient, and only around 25% of that energy is harnessed to propel the vehicle. The rest is simply wasted. The MPGe metric isn’t completely useless though. It does offer a standard rating system to compare all electric cars side by side, and it also calculates the energy use of the vehicle including the charging losses, meaning it is a true “wall to wheels” energy rating. So for a comparison tool, it has its merits. 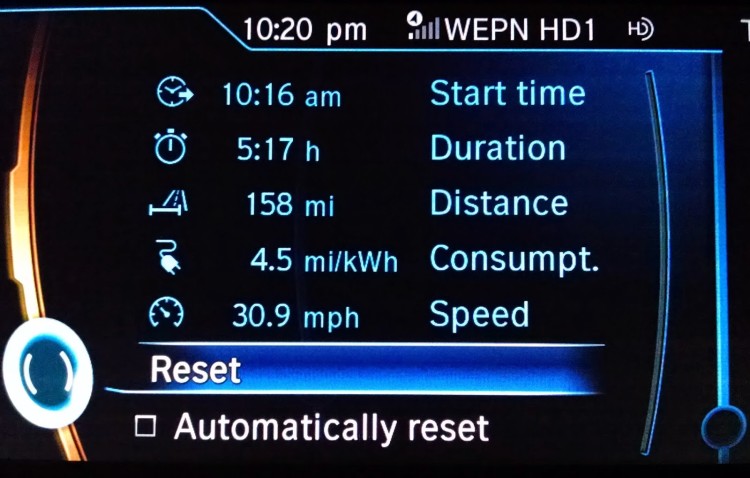 I’ve only driven about 1,500 miles so far, but I’m seeing energy consumption figures that I have never achieved on any other electric vehicle that I have driven (And I’ve pretty much driven them all by now!). Overall, I’m averaging about 4.5 miles per kWh and can easily attain 5 miles per kWh if I make an effort to. Five miles per kWh translates to an extremely low 200 Watt-hours per mile! For comparison, I averaged about 3.6 miles per kWh in my ActiveE under the same driving conditions and ambient temperatures under which I have been driving my i3. I had to really try hard to average 4 miles per kWh with the ActiveE, and with the i3 I would have to intentionally try hard not to do so. Based on the EPA figures I knew it was going to be a tremendously efficient car, but seeing it first hand has been an eye opening experience.

I’m sure I can push the consumption rate up to around 6 miles per kWh if I drive in Eco Pro+ mode, watch my speed and use the regenerative brakes to their full potential. But for now I’m having too much fun getting to know the car. Mashing the accelerator and feeling the instant torque every now and then is difficult to refrain from, but at some point I’ll do a real efficiency test and see how low I can go. Now that I’ve had the car for about a month, I’m starting to get some followers message me ask what I like and don’t like about it. I just want to say I have indeed been compiling a “likes and dislikes” list and I have just about enough info for a comprehensive initial review. That will most likely be the next post here so stay tuned.