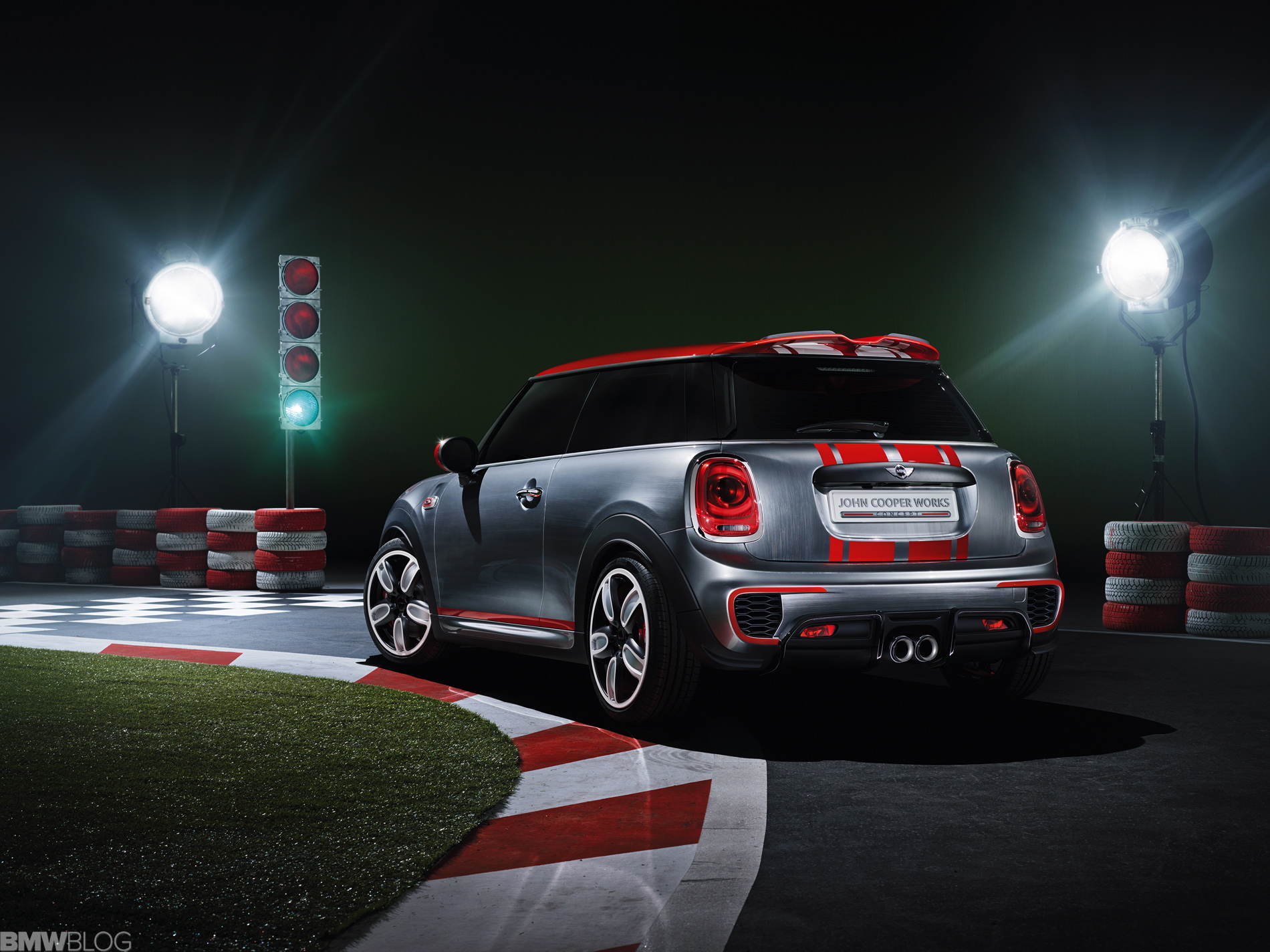 Hallmark MINI style and technology lifted straight from the race track come together to mould the inimitable character of a John Cooper Works model, rendering the MINI sub-brand a byword for irresistible go-kart feeling and genuine everyday usability. And now a new contender for pole position has emerged to take this successful concept to the next stage and bring the promise of maximum driving fun to the small car segment.

The MINI John Cooper Works Concept offers a look ahead to the next generation of the elite sports model. The study car will be presented for the first time at the North American International Auto Show (NAIAS) 2014 and flies the flag for innovative sportiness in time-honoured John Cooper Works style, with features including exclusive body paintwork in Bright Highways Grey, familiar MINI red colour accents, bespoke aerodynamic features and 18-inch John Cooper Works light-alloy wheels in a newly developed design. 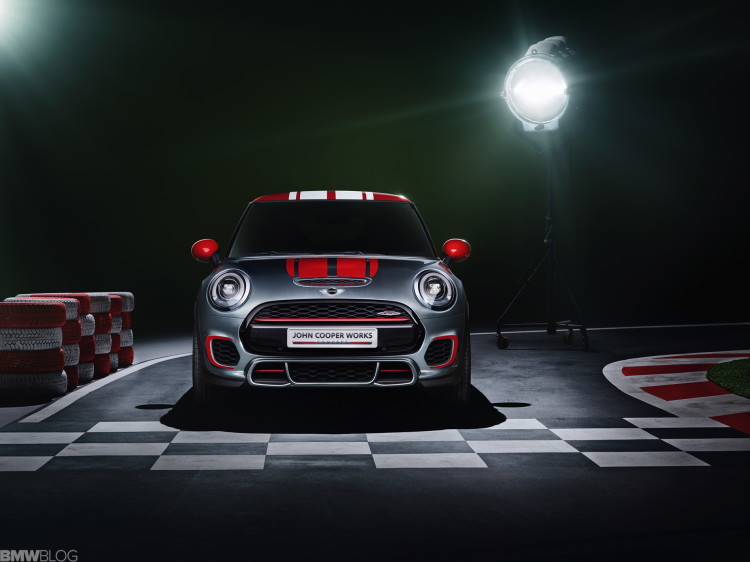 The thrillingly sporty driving experience on board a John Cooper Works model is the result of an overall concept developed on the back of the brand’s many years of motor sport experience. The precise interplay of the ultra-high-performance powertrain and chassis technology with the car’s aerodynamically optimised exterior features ensures that the agile and surefooted handling we have come to know as the MINI go-kart feeling shines brightly in extremely sporty driving situations as well. The result is hardcore driving fun, taken into a new dimension by the MINI John Cooper Works Concept. 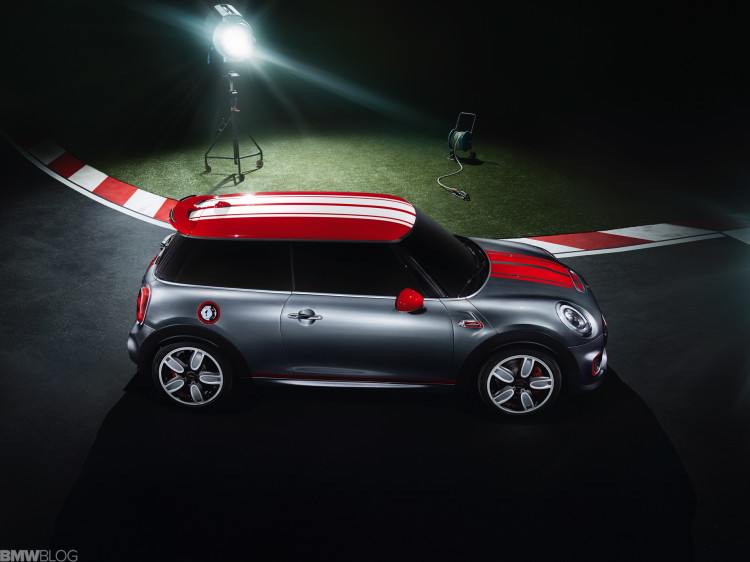 The John Cooper Works Concept is based on the latest-generation MINI. Its origins are clearly recognisable in the longer wheelbase and wider track over the outgoing model, which has a direct effect on the car’s driving characteristics. The model variants of the new MINI available from launch have already shown themselves to be more powerful, punchy and agile than their predecessors. Weight savings and improved aerodynamic properties have also contributed significantly to the new car’s driving talents – and these developments likewise have a positive influence on the MINI John Cooper Works Concept.

Large air intakes – filling the space reserved for fog lights in the series-produced MINI models – and precisely formed air-channelling elements mark out the front apron of the MINI John Cooper Works Concept, which also features LED headlights and a black surround for the front grille. The model-specific John Cooper Works aerodynamic kit also comprises specially contoured side skirts and a rear apron with flaps and a diffuser element. The study car further features a roof spoiler and additional body components designed to channel air efficiently around the C-pillars for optimised aerodynamic balance at high speeds. 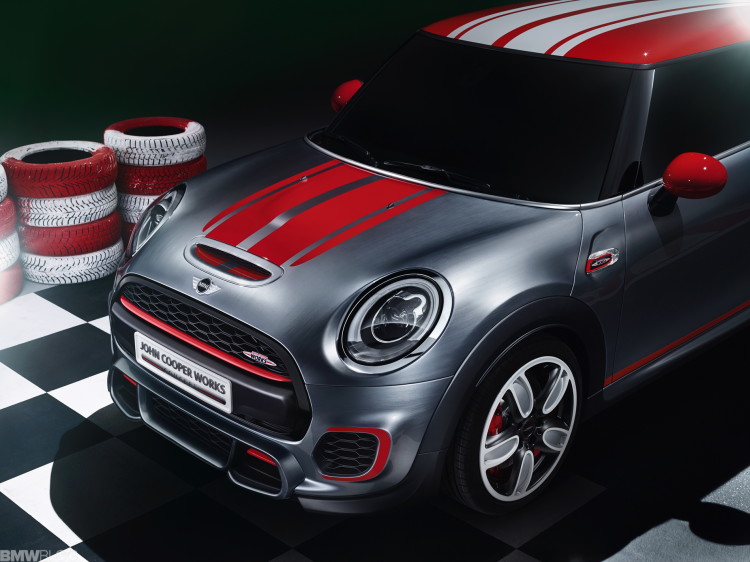 The Bright Highways Grey exterior paint shade owes its expressive character to a special manufacturing process. The hand-polished surface layer is finished with a clear coat and the resulting lustrous sheen of the paintwork further accentuates the eye-catching structures of its pigment layer. Exuding purity and solidity, this paint finish is complemented by John Cooper Works hallmarks such as contrasting red for the roof, roof spoiler and exterior mirror caps. Also included are Sport Stripes – in Chili Red for the bonnet and boot lid, and in white for the roof. Additional red accents adorn the rim wells of the John Cooper Works light-alloy wheels, the callipers of the sports brakes, the side indicator surrounds and the contour lines of the front and rear apron. A red accent line also lends particular emphasis to the John Cooper Works logo on the radiator grille. 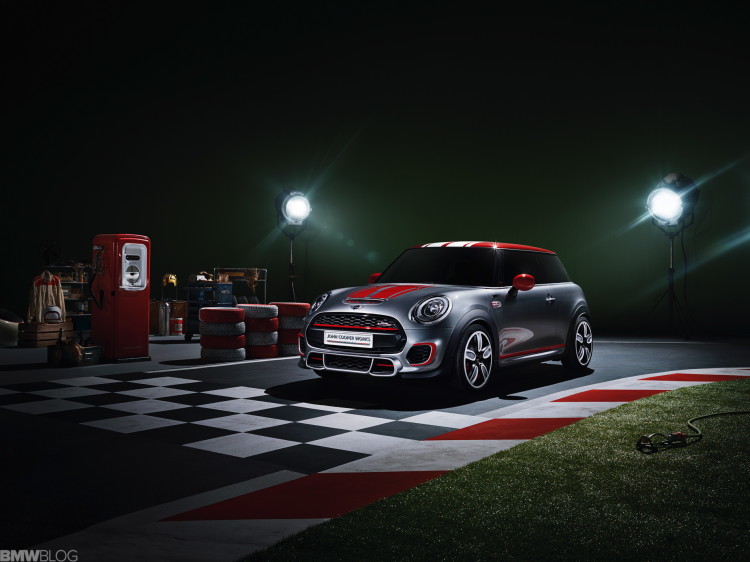 A further nod to the concept car’s impressive sporting focus can be found in the centre of the rear apron. The MINI John Cooper Works Concept is fitted with a sports exhaust system including John Cooper Works silencer system, and the striking twin tailpipes with chrome finish also carry the John Cooper Works logo. With the new elite sports model destined to benefit from further development, these features suggest its enticingly sporting aura will not be restricted to visual features: an unmistakable engine soundtrack promises to share centre stage. 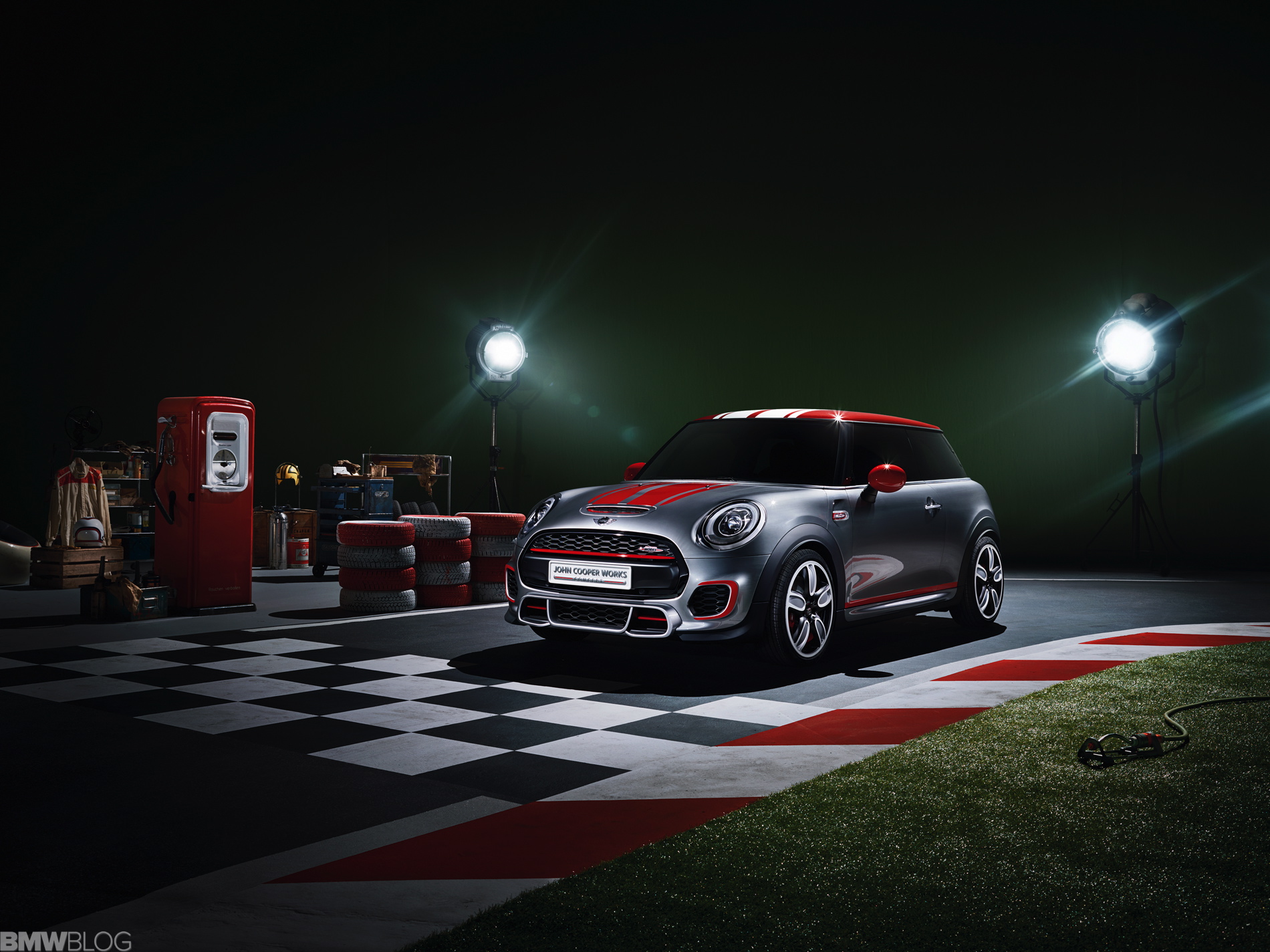 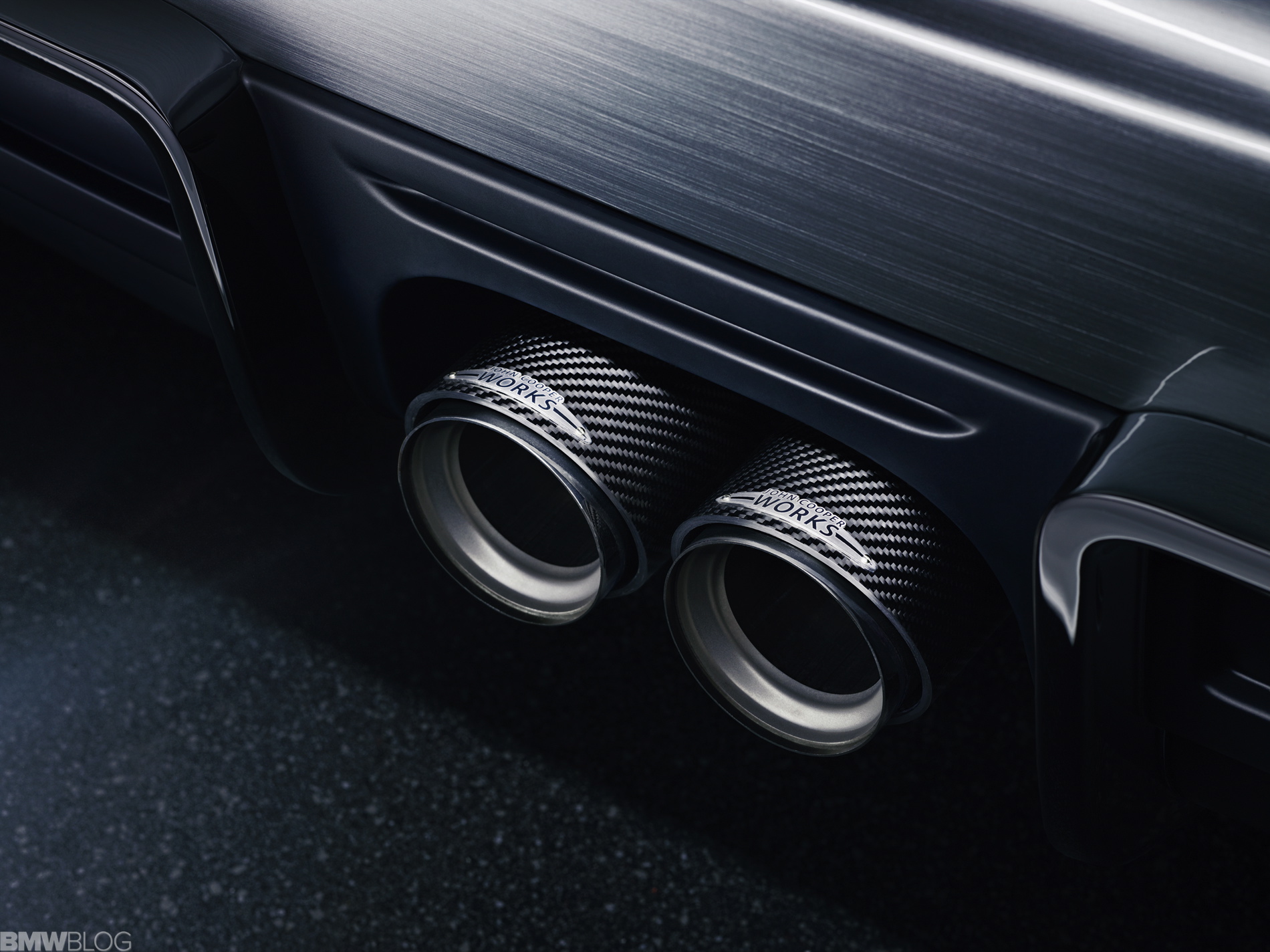 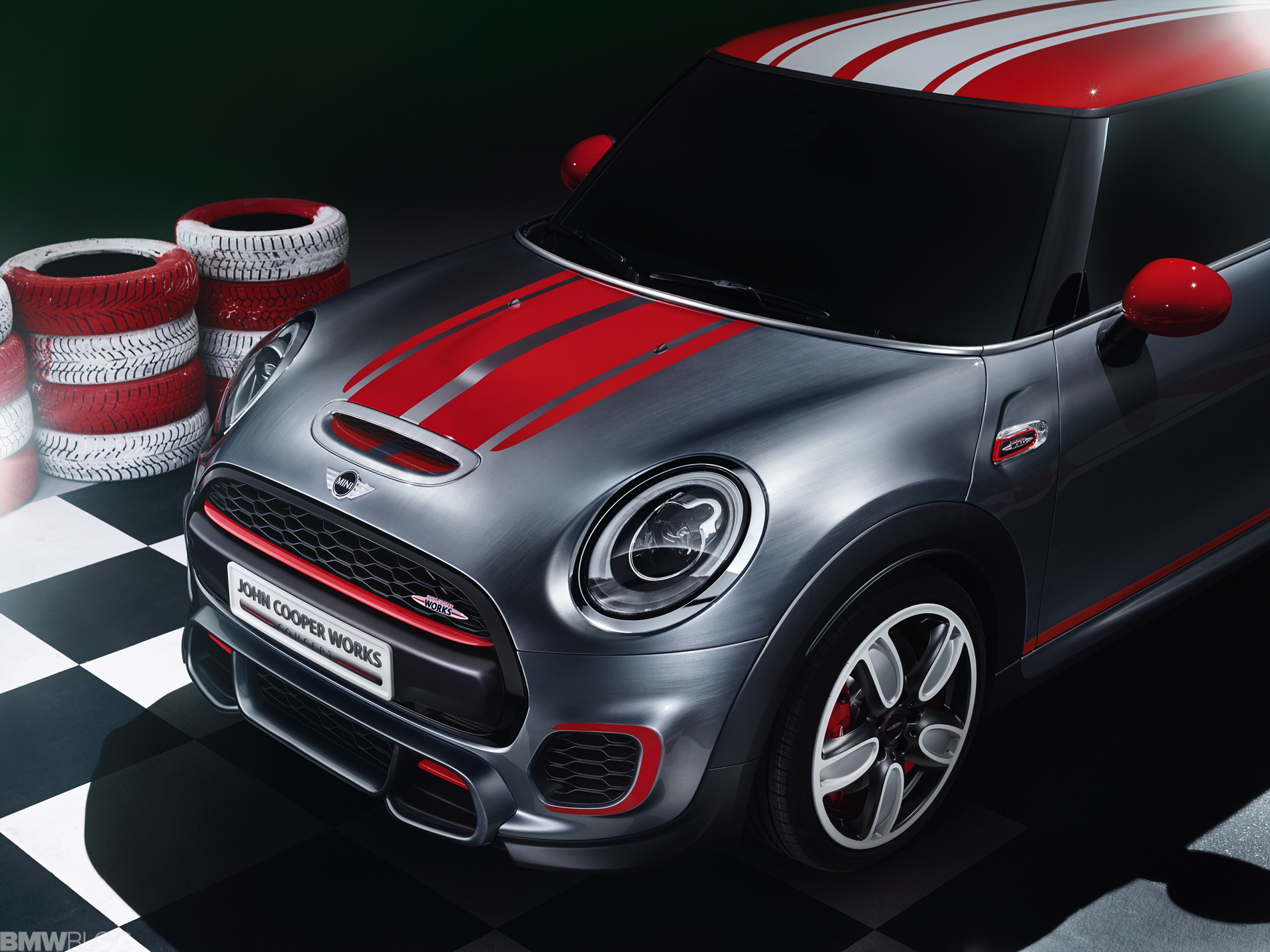 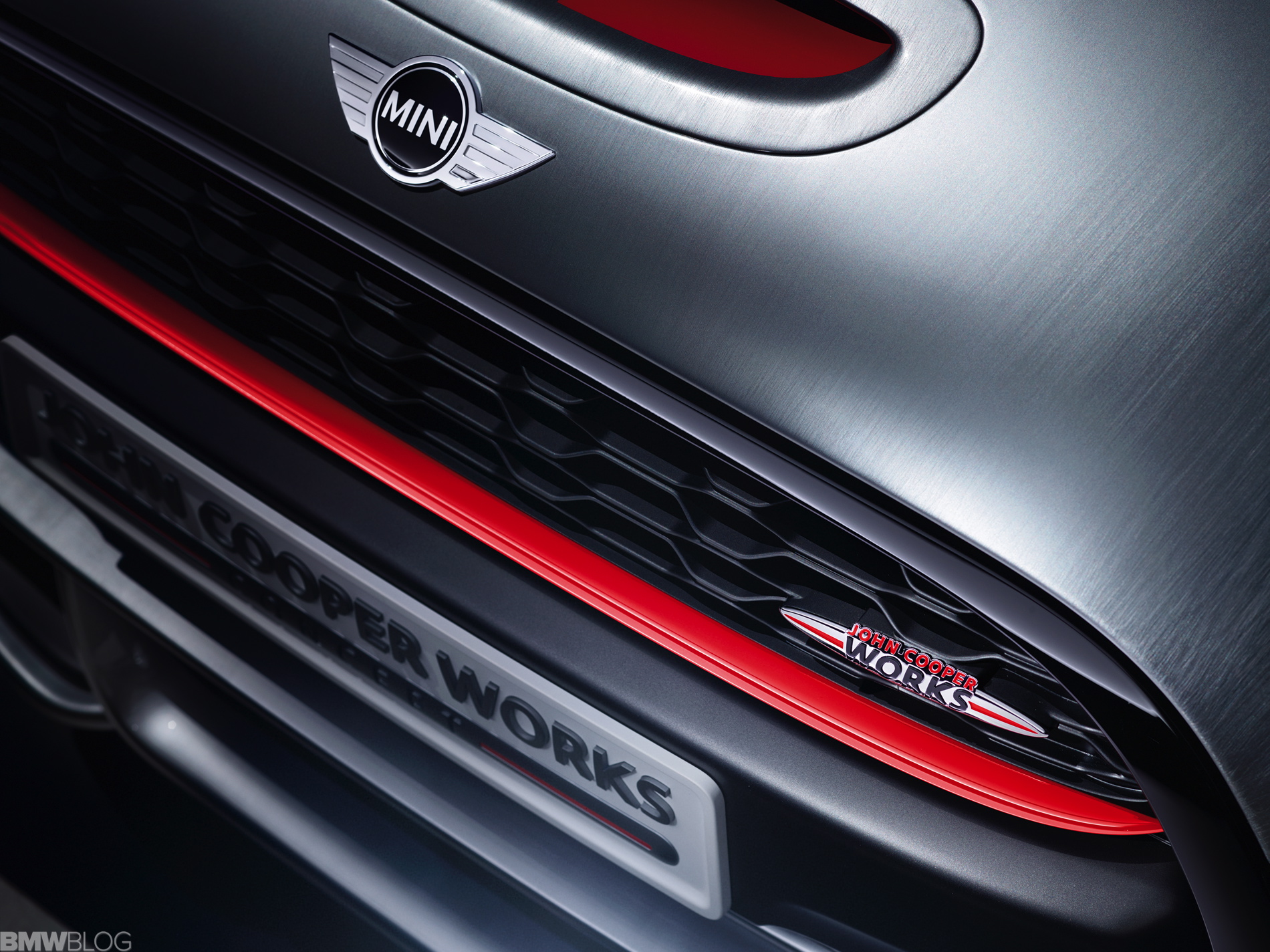 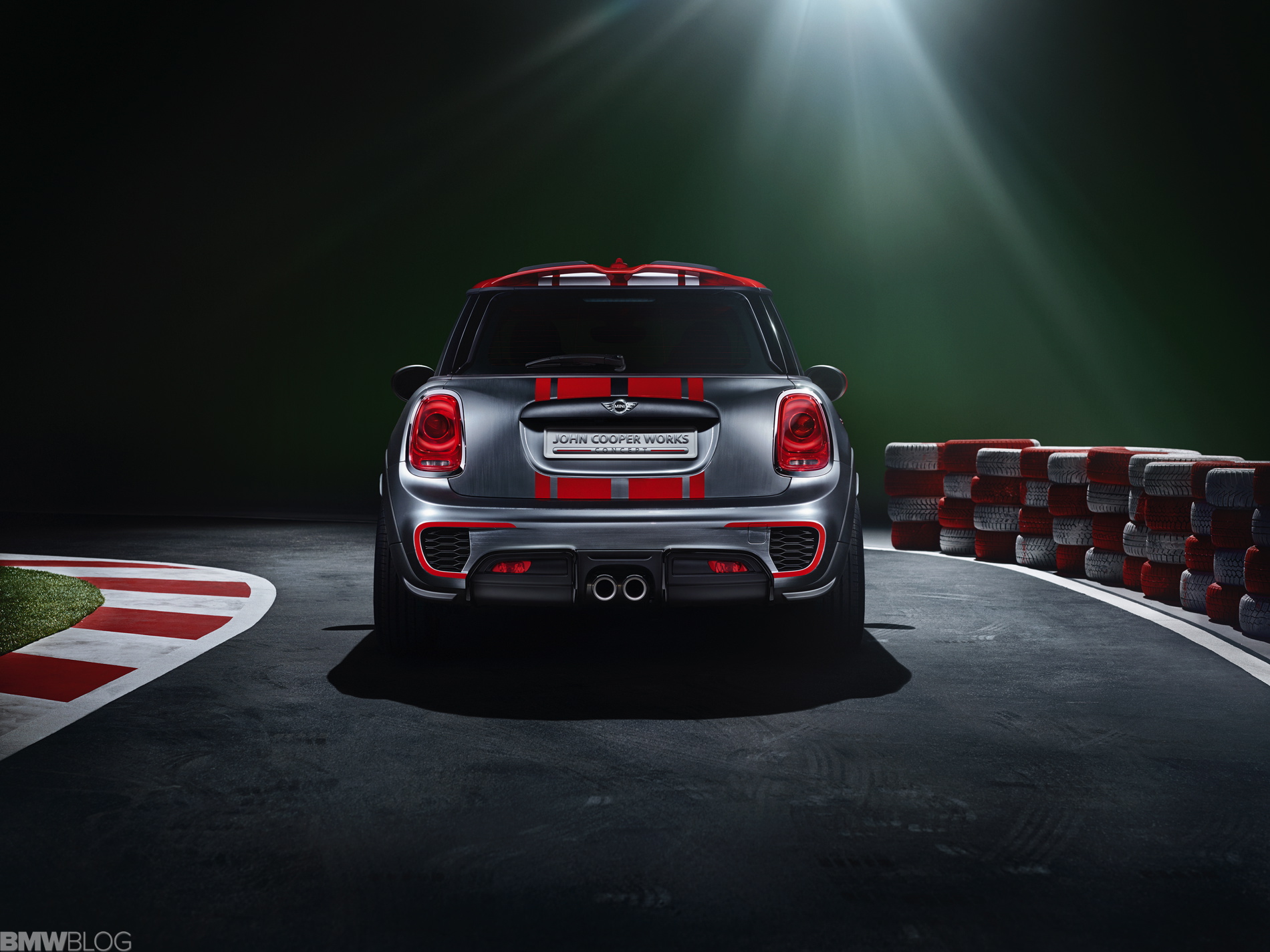 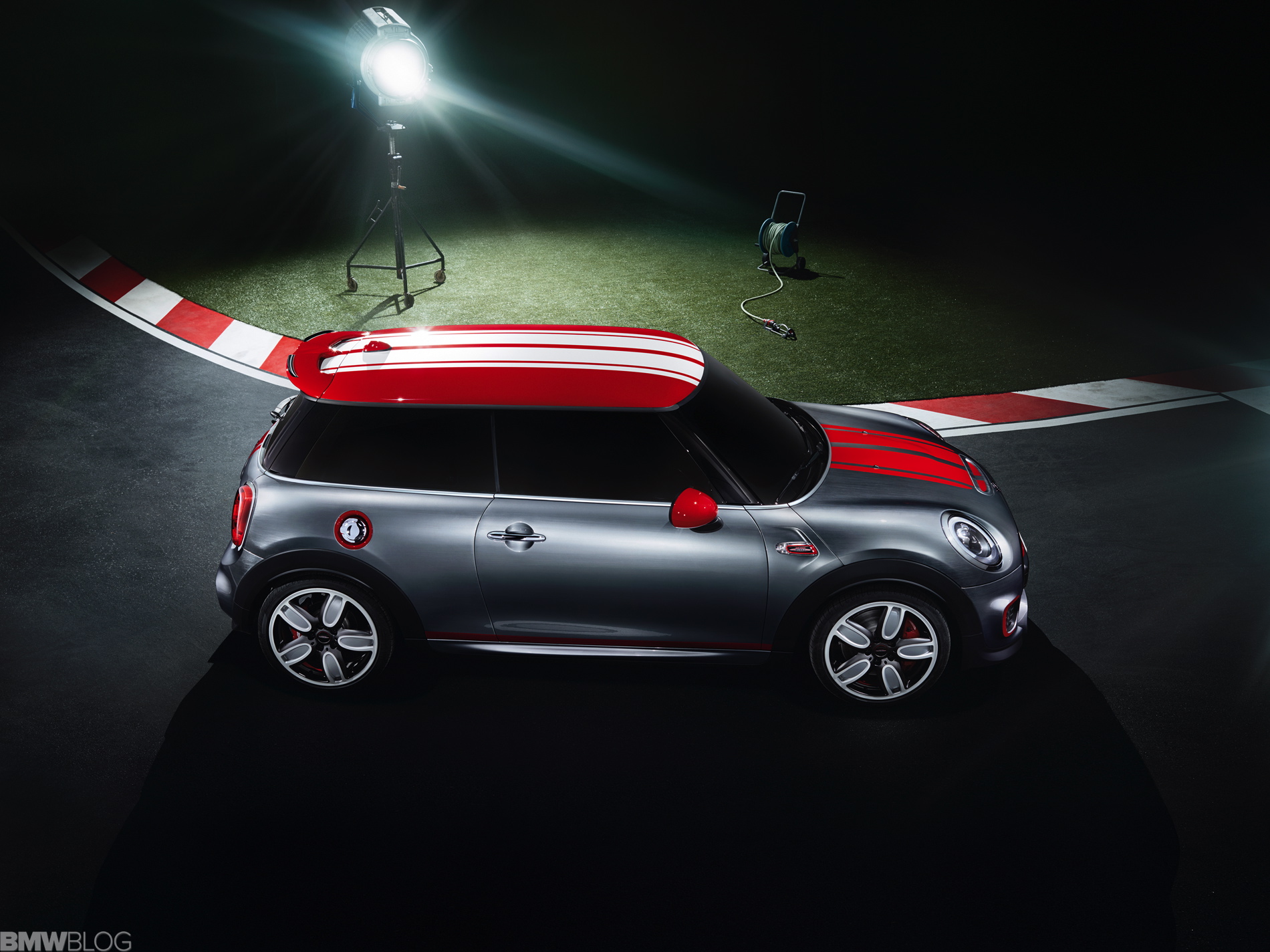 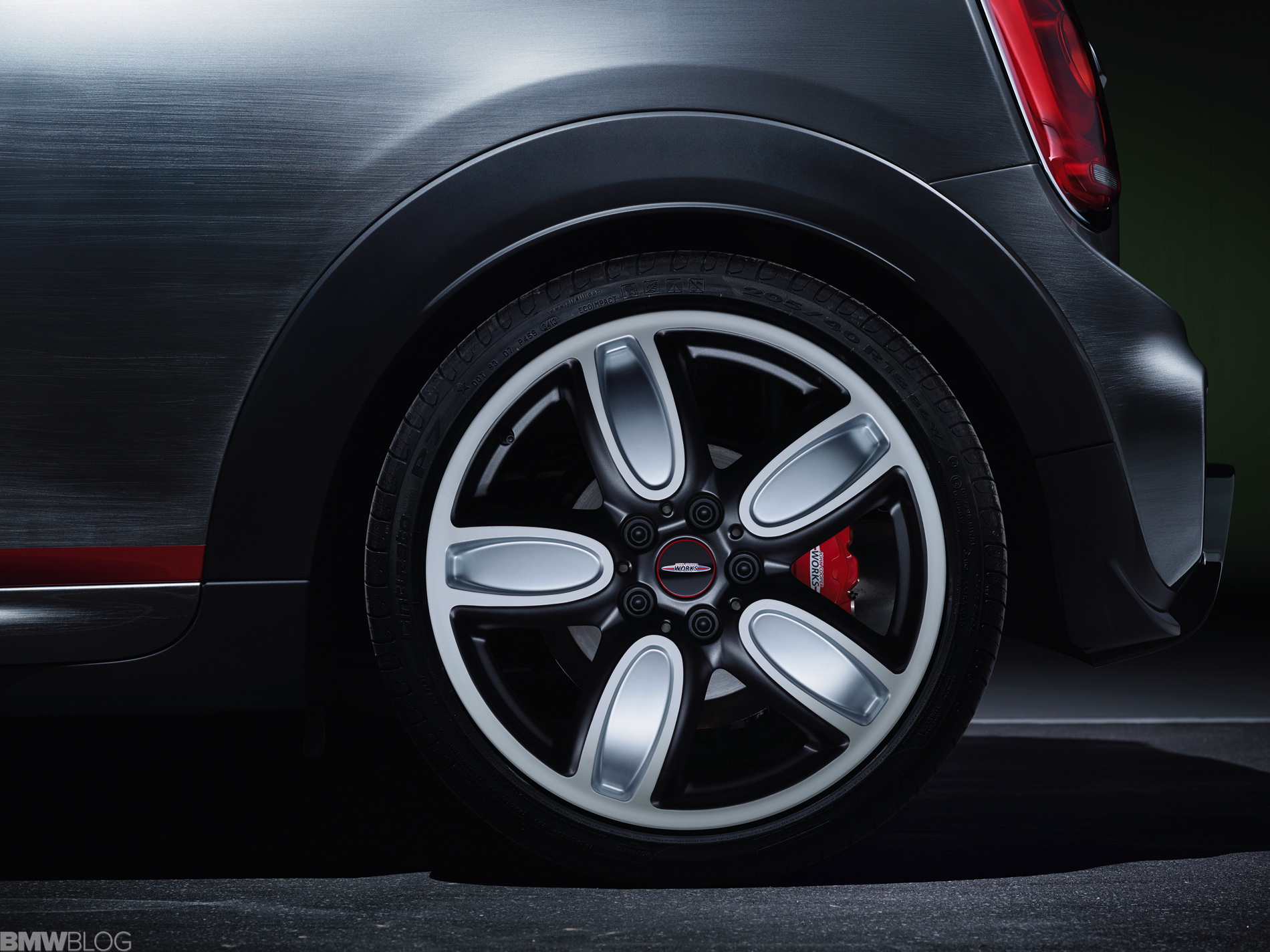 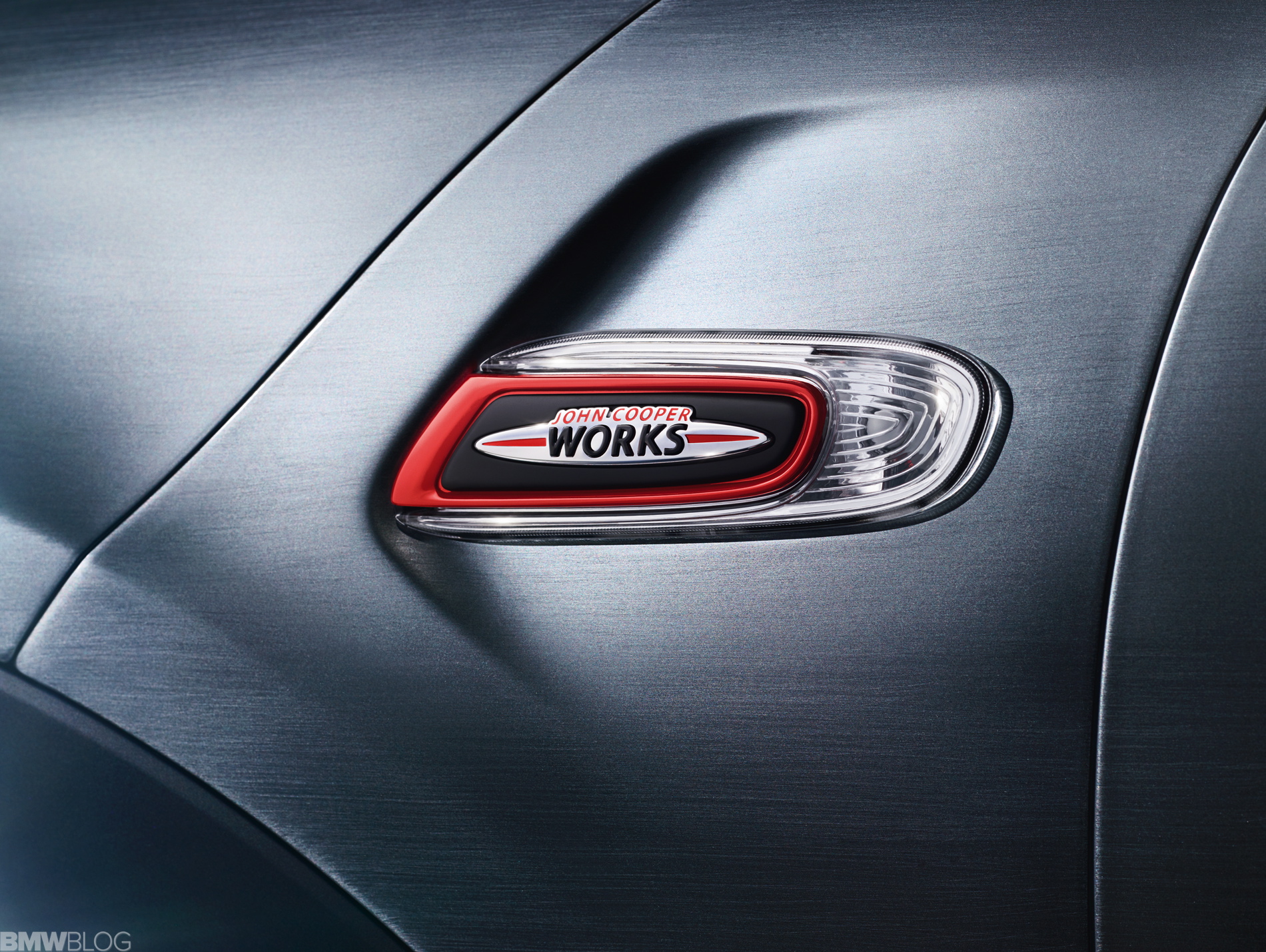 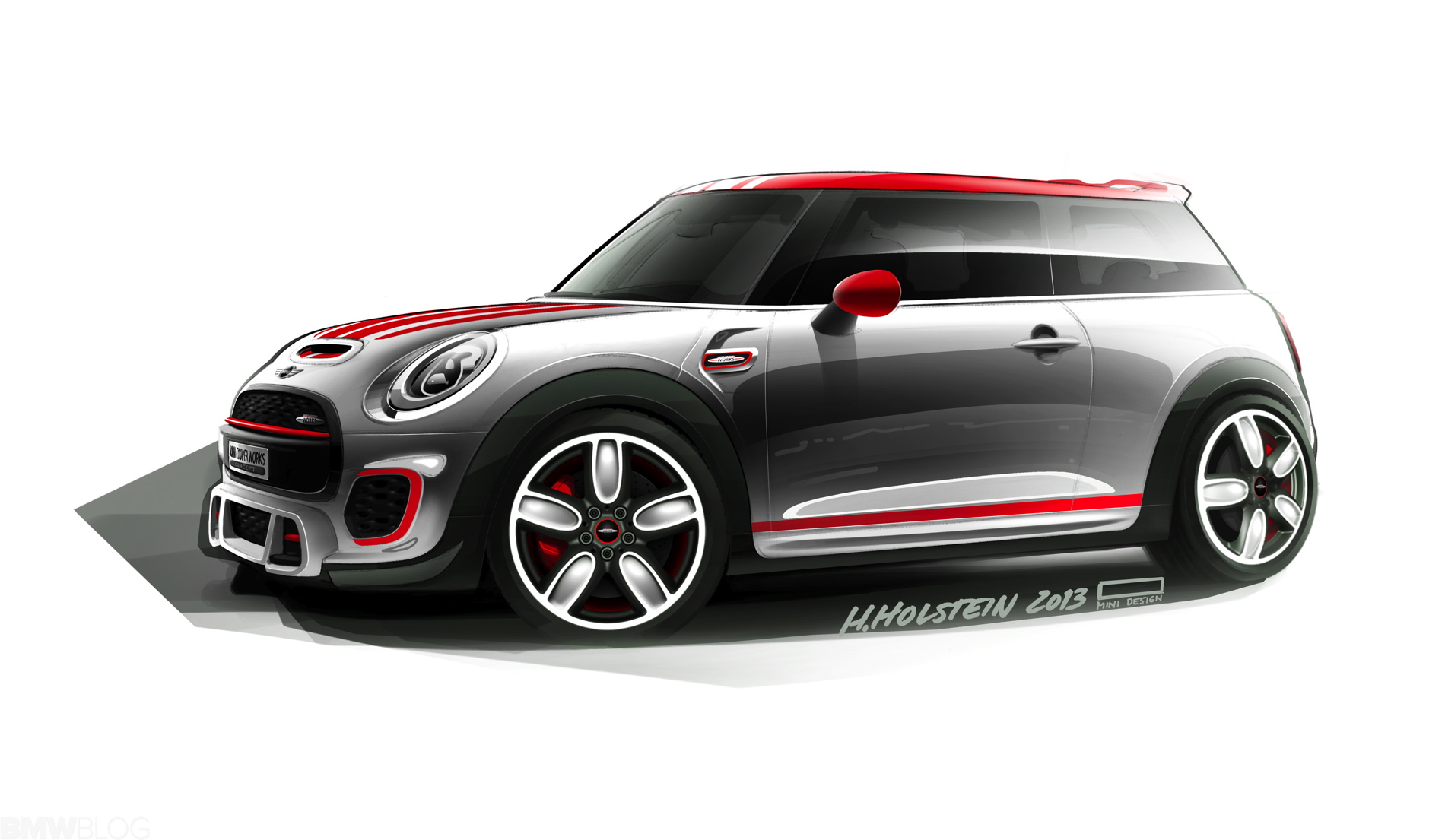