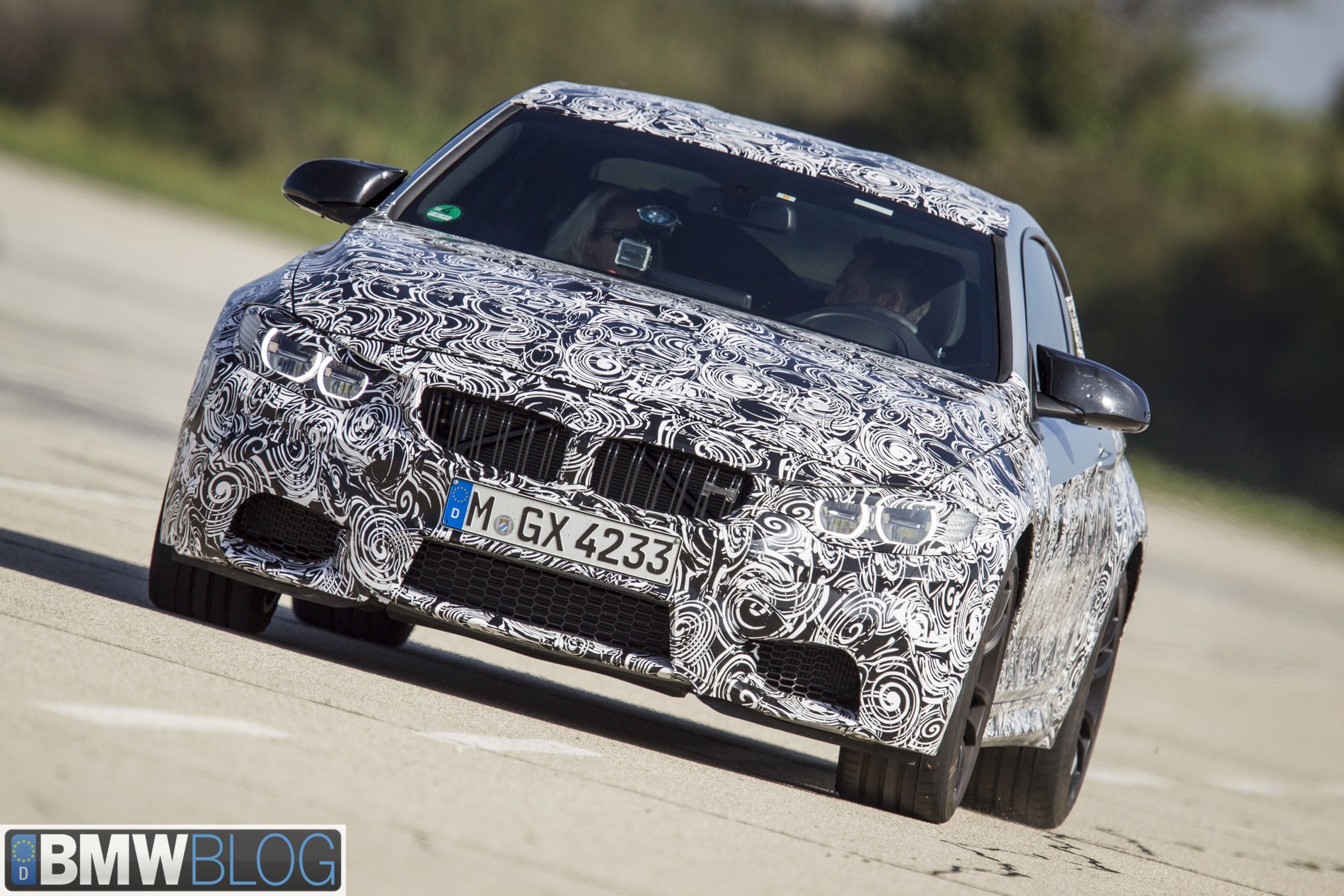 Where is M taking its two chief ambassadors this time?

Yes, I intend by “chief ambassador” the M3…and the (now) M4. BMW brought me to the heart of BMW vibrations and set all its latest tech info loose on my brain at their new Driving Academy Center at the old airfield at Maisach outside of Munich. Cones were everywhere mapping out forced obstacle courses, the F80 M3 and F82 M4 just snickering at what was about to happen. Even the Pebble Beach F82 painted Aurum Dust green/yellow was present to join in the sinister proceedings. 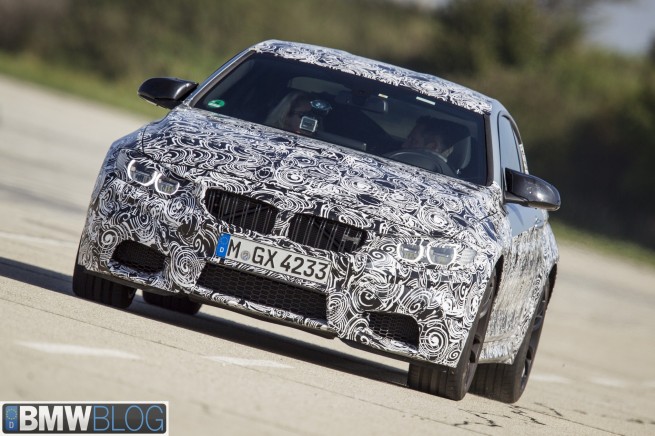 I was going to get as close as anyone yet to steering these cars around a circuit myself. My DTM driver for the few allowed laps was Dirk Werner and he made certain to put all onboard functions on Sport Plus alert mode. But first, I had to be ushered around a few lengthy workshops on tech wizardry in naked white spaces. Very German, very clinical, all meant to starkly juxtapose with the emotions of the great German premium Bimmer bombing run that awaited me outside in the perfect sunshine.

Both Norbert Siegl – M3/M4 Program Manager, Engine – and Albert Biermann – VP, Engineering M – told me first that the weight-loss regimen had been in place for the development from the start, the goal being to meet or beat the weight figure for the E46 M3, i.e. sub-1,500 kg or 3,300-ish pounds. The other point they were eager to press is that these new-gen cars took more inspiration from the racing GT2/4 and GTS street model of the E90/E92/E93 fourth generation. Big boast and I awaited convincing. 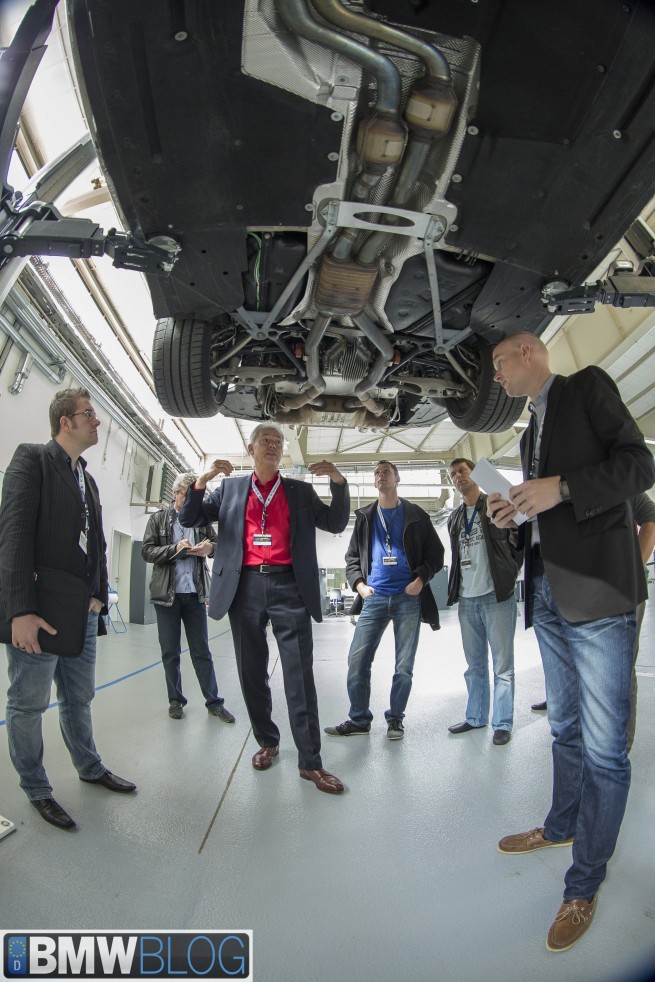 The new i division and M have essentially been working together a bit on CFRP innovations, and all admit that M actually led the way on much of what i engineers eventually started to think possible. The roof, roof center bow support, front fascia, rear fascia, trunk liner pieces, and sexy front strut brace are all in CFRP to save weight and add rigidity to the whole. Then bits like the new oil sump to the “S55B30 Variant” (current placeholder name) inline TwinPower Turbo six is in magnesium. I’m already impressed and sort of want to get to it out there with my fast friend Dirk, but there’s a bunch more. 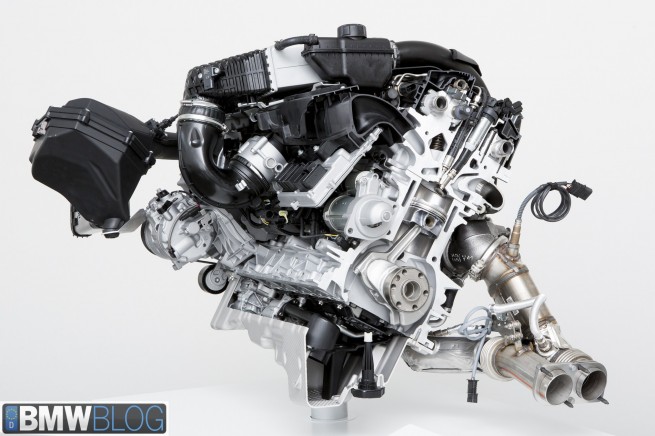 Herr Siegl recounts that the inline-six BiTurbo setup in place of the naturally-aspirated V8 saves nearly 25 pounds right off the bat over the front axle, plus that the new smaller unit can be placed physically further back in the bay. You’ll note that that newly developed TPT assembly (18.1-psi max boost and supplied reportedly by Honeywell) is right down at the bottom and rearward of the S55B30, mated like twins to the exhaust manifold. This just screams efficiency as the exhaust gases that get recirculated have just about an inch to travel before getting sucked and spun on their way to power and torque freakdom. The large intercooler now sits atop the engine, not only making the power bulge on the hood actually a necessity, but again screaming efficiency as the air to the intakes stays nice and cool as possible, versus traveling all the way from the formerly front-mounted intercooler and heating up along the way. 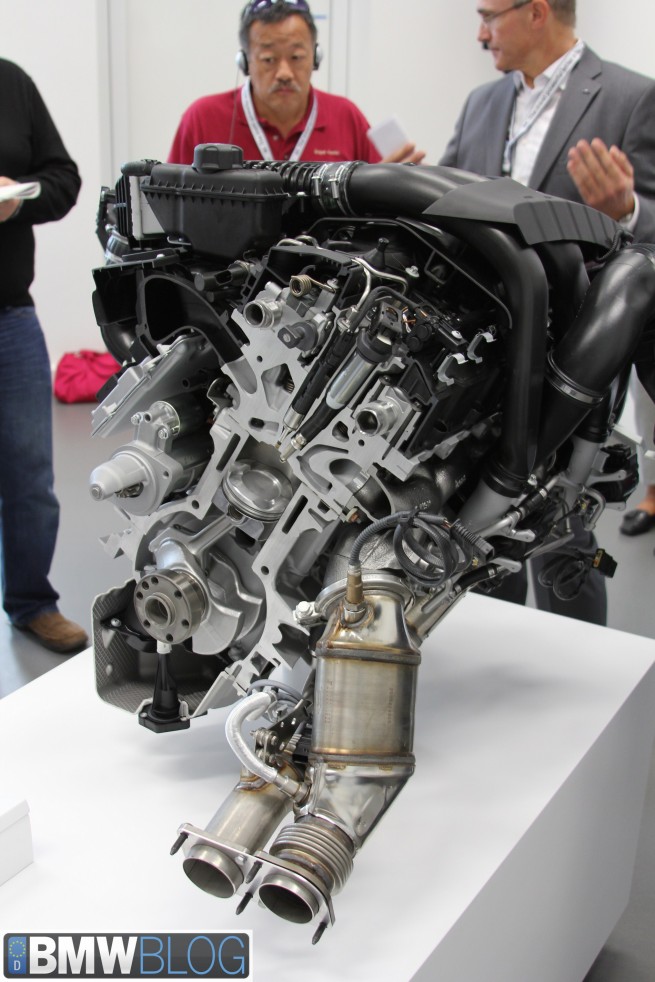 How can this BiTurbo setup hang on to a redline at 7,500 rpm (7,600 rpm absolute limit), create 424 SAE horsepower and what is likely to be also about 420 pound-feet of torque? And that power maxes at around 7,300 rpm, the torque lasting from about 1,800 rpm through to 5,200 revs. Well, you take the S55 and make it nearly friction-free for one thing. The crankcase is a number of degrees more stable under pressure, the crankshaft is of beefed-up forged steel, an additional return-flow oil pump is installed and a turbocharger suction system also that makes certain all circulated oil gets back to the sump instead of lingering in the turbo. A chief goal here has been to minimize the dethrottling characteristics of the engine by creating as few possible obstacles to the intakes. 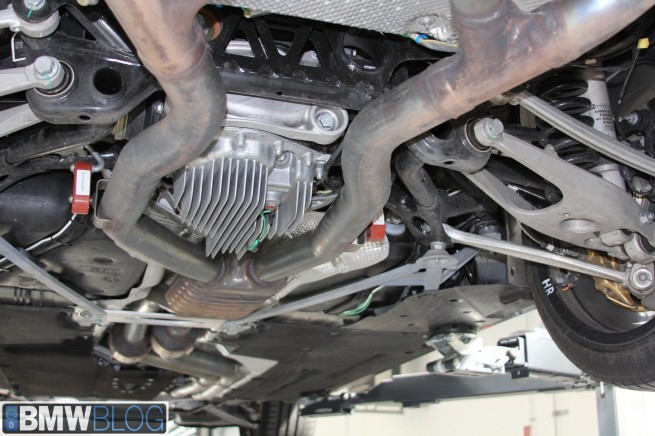 Check out a photo or two of the underbody action. The aero downforce and cooling traits of the underbelly have both been enhanced. I noticed particularly the standard locking rear differential and its enormous cooling vanes. This differential needs to work harder than ever as there is now a drift sensor which senses drift and immediately locks things up. This in theory should make constructive controlled oversteer particularly satisfying.

The other key issue under here with Herr Biermann was that now the front and rear (especially rear) axle carriers are now bolted directly to the chassis and not via dense rubber bushings anymore. Hence the added ties to the motorsports world, among other details of course. 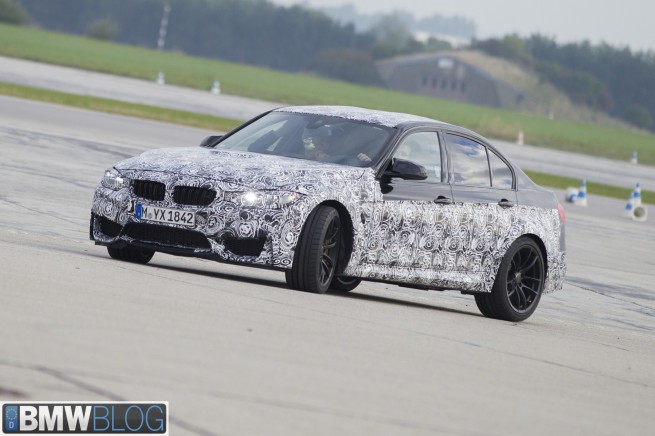 I was ready for the outdoors and Dirk now.

I’d already been out here on a similar obstacle course with the little i3, but this day with the M3 and M4 was going to be a little different I assumed. Everything on the cars was set by the racer boys to full Sport Plus and no DSC/DTC etc. Standard wheels are lighter 19-inch forged alloys and the tire set was Michelin Pilot Super Sport – 255/35 ZR19 92Y and 275/35 ZR19 100Y. Brakes on all prototype mules were the optional carbon ceramic set at 15.7 inches front with four-pots and undisclosed diameter rear discs with two-pots. In an interesting sign of something, I figured, every tester was set up with the all-new ZF six-speed manual shifter with twin-plate clutch. If the seat of my pants is to tell anything, this new box is even better for playtime than the outgoing Getrag six. 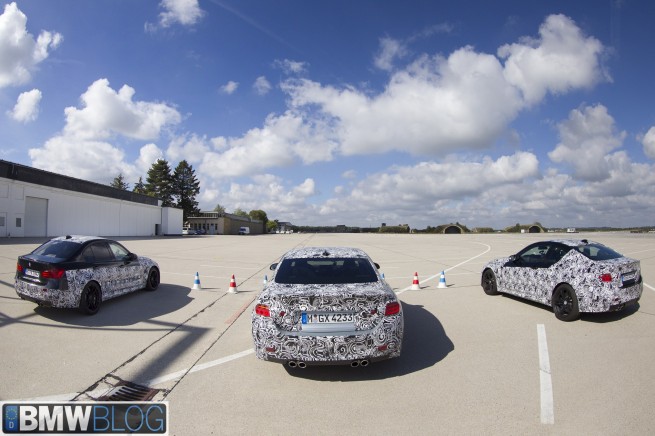 With widened tracks and lowered chassis hunkering down for the run, we smoked the launch right away and were tearing it up through innocent families of cones. In short order, I felt what the difference was essentially. The rear quarters are simply sensational now and you can absolutely shove this mother around without getting things too easily floaty as they have been up to now. It’s almost eerie in that the power and torque pile on, you should be gracefully dancing in weight transfers, but you’re more ripping and tearing at the tarmac and not budging much from your line. My only worry in all of this as a tad of a purist is that now anyone can drive the M3 or M4 like a DTM racer and pretty much get away with it. It seems like there’s so much more to be stuffed into those tires at every corner thrust. And the absolute new sturdiness at the wider front is also clear thanks to the new strut brace keeping side-to-side wag to a minimum.

And, of course, the exhaust – neither Boysen nor Faurecia this time around – is art. All four pipes are open always, so again there is no inefficient Jekyll-Hyde on/off switch happening, just as there is no typical cylinder deactivation going on in the engine thanks to Double Vanos and Valvetronic acting as a better rheostat-like valve monitoring system instead. So, all remains as smooth as I was hoping in these new cars, but they are striking me as kickass as the V10-powered M5 did when I first drove it. Sincerely. 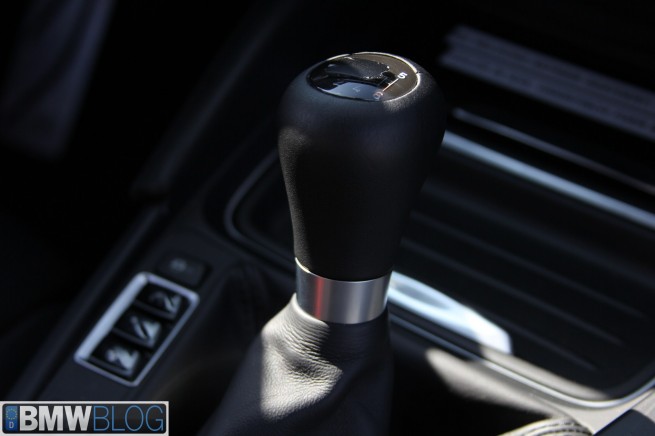 Would have been really nice to try a ride with the M-DCT seven-speed automated, but no such luck. And the guys wouldn’t confirm or deny yet whether North America might get the manual.

Deliveries start at the beginning of spring 2014 after the world debut for the production versions of the M3 and M4 at the Detroit show in January. Pricing ought to be around $60k for the M3 sedan and around $65k-plus for the M4 coupe.

Will these be the best mid-size Ms ever? That sort of declaration is always up to the owners and aficionados to decide on their own. This is a passionate pair, though.