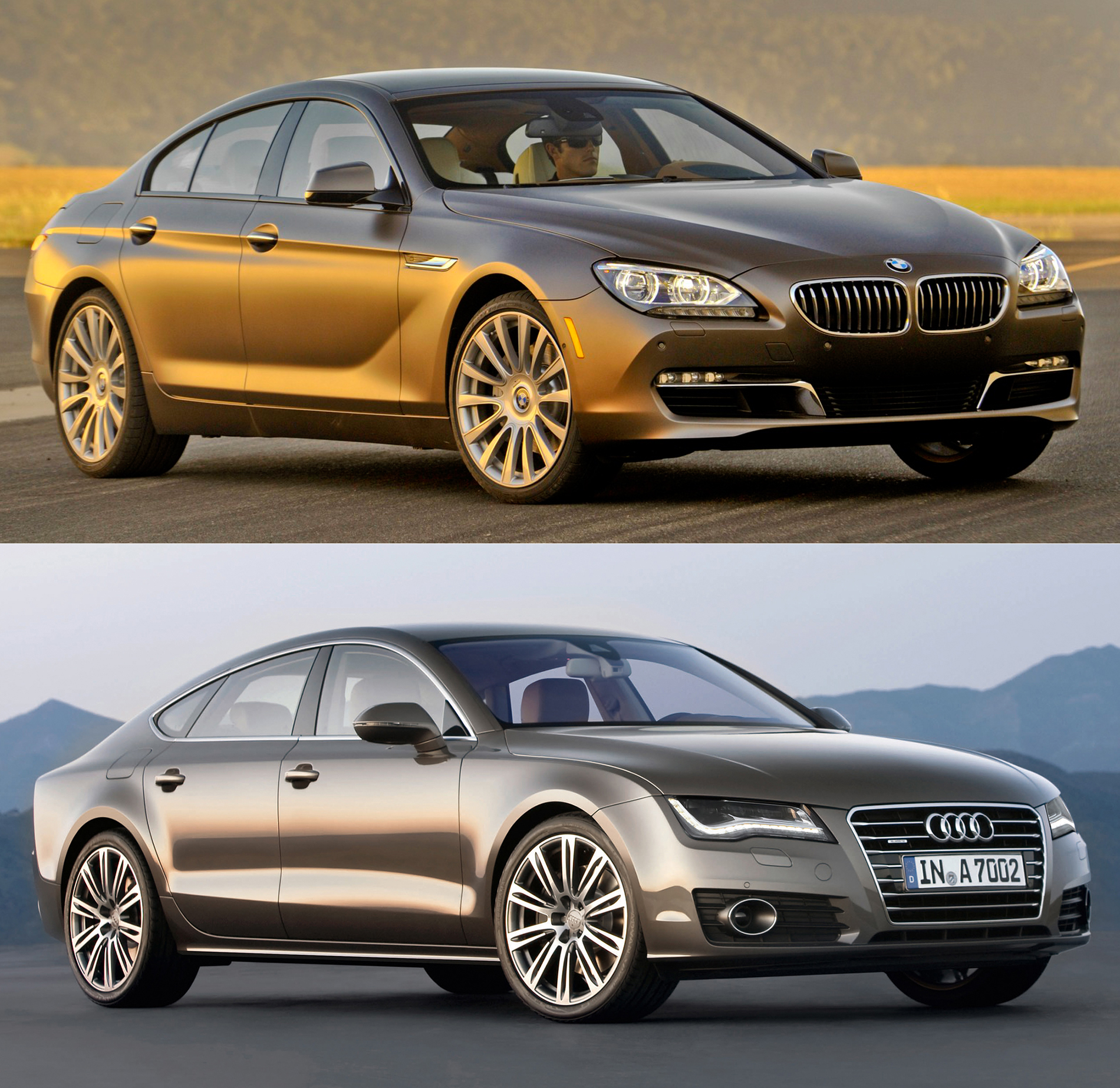 BMW attempts to lure in new customers across the United States with a drive and compare event they call the BMW Ultimate Driving Experience. They trot out representative examples of their model line (with the glaring exception of M product this year) and select competitors product.

Given my druthers, I selected to compare the Audi A7 to the BMW 640i xDrive Gran Coupe. The other comparison involved the 750Li and equivalent Mercedes S Class – both cars catering to a segment beyond sporting, executive expresses. But both the 640 Gran Coupe and A7 occupy a new niche segment of four door, four place coupes showcasing sophisticated styling and performance pedigrees. And with Audi adapting the additional utility of a rear hatch on the A7. 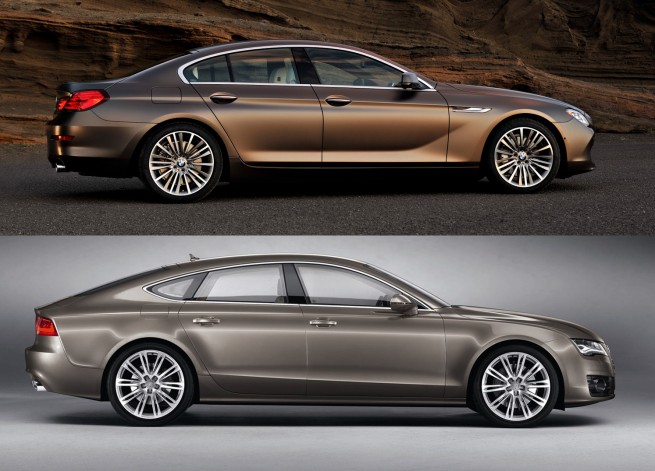 The compact V6 Audi utilizes isn’t an optimum configuration for vibration and aural pleasantness, but a balance shaft and aggressive mufflers damp the negative aspects of the 90 degree V angle in its six. The inline six BMW employs is the familiar N55 – a smooth powerful and highly efficient engine.

Both of these engines have won awards and they’re fairly evenly matched for power output – though one oddity is that the turbocharged BMW N55 delivers peak torque at a lower RPM than Audi’s supercharged six. And both engines were coupled to eight speed automatic gearboxes.

Both cars were well equipped with impeccable interiors, great seats and the Audi sporting a clever stowaway nav/infotainment display. The BMW was equipped with lane departure warning, which I found entertaining if not all that useful. But the BMW starts out with a higher base price than the equivalent Audi. So that has to be factored into the comparison.

The 640i had a wonderful exhaust note enhanced when the gearbox was put in manual mode and with sport mode selected. Seats were what you expect from BMW and interior styling and materials were typical of the Munich based Bavarians.

The car accelerated well – shifts in automatic mode being smooth (and often given the eight forward speeds) – in manual mode the shifts were crisp and accompanied by that fabulous mellifluous soundtrack the inline six makes. The 640i is a joy to drive and a bit more pure if ordered without xDrive. There’s a connectedness of the driving experience of the 640i to the other models in the BMW lineup. 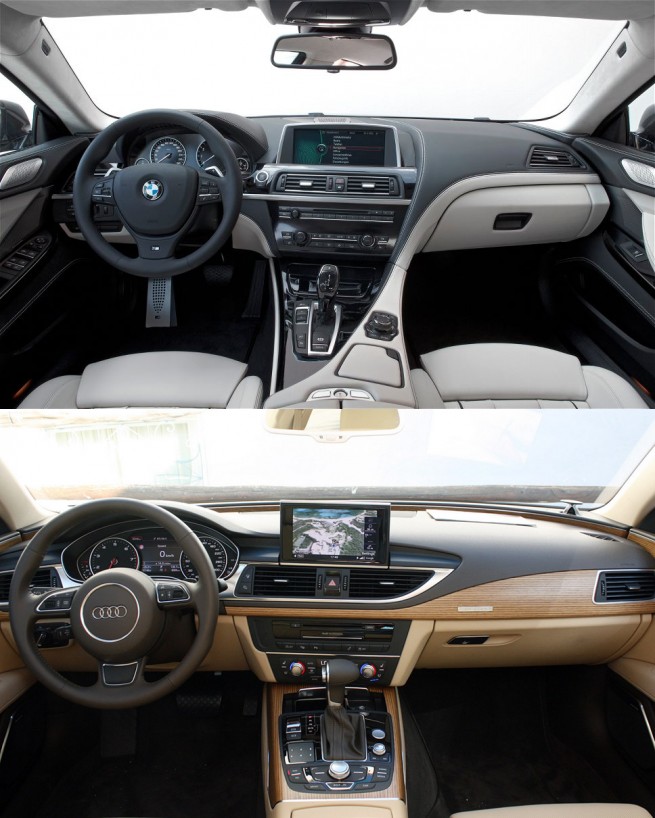 The Audi A7’s interior was in keeping with the northern Bavarians traditions, a technical exercise with a great, easily learned MMI interface to the nav/infotainment functionality. The seats were great (though given a choice I’ll take BMW sports seats other most others). There is a lot of value in the cabin of the A7.

The A7 accelerated well – and it was largely quiet under acceleration, more of a turbine-like smoothness and swoosh than old-school exhaust note. Taming the odd aural experience of a 90 degree V6 may be a part of the rationale for the quiet.

The brakes of the A7 felt really good. In some Japanese cars you can brush the brake pedal and get an immediate sharp bite of brakes, The Audi allowed a bit of pedal movement, biting progressively rather than suddenly – they felt perfectly controllable and well balanced. Beyond good – these are nigh on perfect for street use.

Audi also seemed to leave the transmission in gear on lift throttle and the driver becomes aware of engine braking. Could have been a setting or drive mode that I wasn’t aware of. Not disconcerting, but noticeable.

However, the steering on the Audi left a lot to be desired. It is, as is the BMW, electromechanical, but with less feel than the BMW (in sport mode). And the kicker, confirmed by other drivers of the A7, is that it has a momentary odd feel when taken off center, a bit of a ‘twitch’. Not a safety issue by any stretch of the imagination but just not smooth.

The Audi A7 has a lot going for it, good engine, great brakes, excellent interior and a significantly lower price than the BMW 640i xDrive Gran Coupe (does BMW charge for its cars by the length of their names?). But given the steering feel of the Audi A7, and how that would annoy me every time I drove it, I’d pony up the extra bucks for the BMW.