The BMW Welt “ensemble” – formed by the BMW Welt, Museum and Plant – has quickly become one of Bavaria’s top attractions. The success of all three realms of discovery lies in their diverse range of regularly changing exhibitions and focus topics, as well as their exciting programme of events. The BMW Welt combines technology, design and innovation with lifestyle, dynamism and culture to create a public space for meeting and discussion.

The BMW Welt. The heart of the brand – the beat of the city.
Since it opened in 2007, the BMW Welt has provided its roughly two million visitors a year with a wide range of unforgettable experiences – and, today, is one of Bavaria’s most popular attractions. Visitors from all over the world come to admire the latest trends and exhibitions, technology and design, or even experience the excitement of collecting their new car at the BMW Welt. Both as a building and an institution, the BMW Welt serves as an important interface between the company, the brand, its products and the visitor. This is the only place where it is possible to experience the company’s past, present and future as a whole. 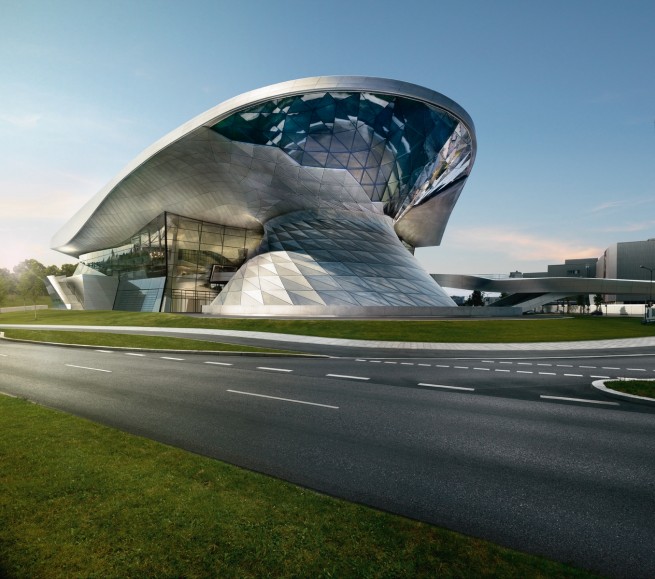 Besides personal delivery of up to 100 cars a day to their new owners from all over the world, exclusive presentations of the latest vehicle model series and motorcycles, combined with interactive exhibits, offer insights into BMW research, development, design and production – and allow the visitor to experience the BMW brand and the company from virtually every perspective. The BMW Welt’s Junior Campus for children and teenagers is a comprehensive and exciting programme designed especially for younger visitors. It allows them to explore the world of mobility in a highly creative way and implement it in many different scenarios. The BMW Welt also has its own Events Forum, equipped with state-of-the-art technology for all kinds of company and other events. This makes it an ideal venue for concerts, exhibitions, conferences, live broadcasts, receptions and seminars as well as for the sparkling array of events the BMW Welt hosts itself: From readings by best-selling authors to jazz contests, parties and improvisational theatre, through to New Year’s Eve parties – this is a place where guests can truly feel the beat of the city.

BMW Museum. History up close.
The BMW Museum was built right next door to the BMW Group Headquarters – which Munich residents soon dubbed the “Four-Cylinder” – in 1973. The concept behind the BMW Museum, which reopened on 21 June 2008 following an extensive expansion, focuses on the fascination of the BMW brand. Around 120 original exhibits showcase more than 90 years of BMW brand history along a central route, or “road” that guides 400,000 visitors a year through 25 separate exhibition areas. Special junior programmes for children and teenagers round off the Museum’s offering.

BMW Plant. A passion for technology.

The BMW Plant Munich is the original BMW Group Plant. As part of the BMW Group’s global production network, the plant builds up to 1,000 BMW 3 Series (Touring and Sedan models) and more than 1,000 power units a day, including four, eight and twelve-cylinder petrol engines and high-performance engines for the M3, M5 and M6. The Munich plant employs a workforce of around 9,000 people from more than 50 countries and accommodates all automobile production technologies. It belongs to the Group’s global production network of 24 plants in 13 countries and, as part of the BMW Welt, also serves as a “window on the world of BMW production”. Individual tours provide a unique and authentic insight into automobile production.

The BMW Welt hosts more than 50 different events a year, from Brazilian carnival, to improvisational theatre and poetry slams, through to Sunday matinees and the finale of the renowned BMW Welt Jazz Awards. Since the vehicle collection process is such an integral part of the BMW Welt, visitors who are taking one of the fascinating tours or viewing the changing vehicle exhibitions, can also share in the new car-owners’ joy as they receive their BMW fresh off the production line.

The BMW Welt’s Junior Campus Portal invites younger visitors to enter a fascinating universe for them to discover. The BMW Welt’s wide range of educational programmes allows young guests to try their hand at being an engineer or a car designer, for example. All of the content is closely tied in with the Bavarian school curriculum and designed to appeal to youngsters’ curiosity. Specially trained staff assist with the individual programmes.

Besides the diverse programme of events and regularly changing exhibitions on BMW technology, design and innovation, visitors are also fascinated by the building’s extraordinary architecture. Professor Wolf D. Prix’s award-winning design makes the BMW Welt one of Munich’s most exciting locations – both inside and out. The Viennese architect and his team, COOP HIMMELB(L)AU, consider themselves part of the deconstructivist tradition – together with famous international figures, such as Zaha Hadid, Daniel Libeskind and Rem Kohlhaas. The roof of the BMW Welt could easily fit over Saint Mark’s Square in Venice. But the entire roof construction is supported by just eleven pillars, so that it almost appears to be floating. Some 3,600 solar cells were installed on this same roof, over a total area of 6,300 square metres, creating the impression of a single entity. Photographers and camera teams have also discovered its exciting architecture for themselves: The BMW Welt is regularly used as a location for TV productions and photo shoots.

The BMW Welt also offers an exceptional fine-dining experience. A large team of expert staff takes care of visitors’ well-being, serving everything from light meals to three-course dinners, and making a visit to the BMW Welt a real culinary highlight.

At its opening in 2007, Christian Ude, Lord Mayor of Munich, the Bavarian state capital, commented that: “In this day and age of growing competition among industrial locations, it is by no means a given for such a large, dynamic and, in particular, global company to put down deeper roots in the city. The BMW Welt not only benefits Munich in visual and architectural terms – it is also a highly significant project through which BMW is once again pledging its commitment to its home city.”

The latest information on opening hours, events and guided tours can be found in the internet at www.bmw-welt.com/en.

3. The BMW Museum. History up close

Munich is where BMW’s history all began. The Museum also reflects the ongoing history of the company in the city. Visitors are able to experience and learn about the brand’s technological horizons and design history: from the very beginnings early last century all the way into the new millennium. The Museum’s collection of historical cars, motorcycles, racing and aircraft engines, combined with a glimpse of the technology and designs of the future, have been the foundation of its success since 1973. With its unique range of original exhibits, the BMW Museum appeals to visitors from all over the world and has established itself as one of Munich’s most popular attractions.

Since it reopened in 2008, the BMW Museum has continued not only its own success story, but also that of the company – in a new space, with new content: With its new approach, and five times the exhibition space, the BMW Museum highlights BMW’s competence and innovative strength.

Over an area of 5,000 square metres, vehicles, themes, architecture, design and media concepts combine to provide an unmistakable brand experience and form a unique composition of exhibits from past, present and future. The range of topics comprises the history of the BMW Company, its brand and products, and combines all of these with a broad range of developments in design, technology and motor sports. Strolling through 25 focus topics, visitors from all over the world walk along “Museum roads” and submit to an intense brand experience.

The concept of the museum of the future.

The museum concept focuses on the fascination of the BMW brand. Special emphasis has been placed on using the latest presentation techniques to showcase the more than 120 original exhibits and present information on BMW vehicles, their sporting successes and the design development process in an interesting way. A central “road” leading through the Museum creates an urban setting and guides the visitor through space and time. The “Bowl” is an ideal new venue for any kind of temporary exhibition as well as a wide range of cultural events.

The latest information on opening hours and admission prices can be found in the internet at www.bmw-museum.com.

4.  The BMW Plant. A passion for technology

The same high standards of quality, safety and careful use of resources apply at all plants within BMW’s international production network. Innovative production technologies and highly skilled employees at all locations assure the production of premium cars “Made by BMW” comprising more than 10,000 individual parts and components.

The BMW Plant Munich is the BMW Group’s original plant. It is located in the north of the city, directly next to the BMW Group Headquarters, the BMW Museum and the BMW Welt. The Plant employs a workforce of around 9,000 people from more than 50 countries around the world, including around 700 apprentices. As a part of the BMW Group’s global production network, the BMW Munich Plant builds more than 1,000 engines and up to 1,000 cars a day. Representing all of the BMW Group’s international production facilities, the BMW Munich Plant, next to the BMW Welt, offers visitors a direct insight into state-of-the-art automobile manufacture.

The origins of BMW production go all the way back to the year 1917. Since 1922, the plant has stood in Munich’s Milbertshofen district in the north of the city. Originally, the Munich Plant built only aircraft engines and motorcycles: In fact, BMW’s 100,000th motorcycle rolled off the production line here in 1938. Automobile production in Munich did not begin until 1951, with the launch of the BMW 501. The first BMW Isetta was built just four years later, securing additional jobs. The BMW 1500, the brand’s first sporty four-door midrange sedan, entered production in 1962, laying the foundation for BMW’s success in the market. The company transferred some stages of production from Milbertshofen to the town of Dingolfing some 110 kilometres north-east of Munich in the late ’60s, with motorcycle production moving to Berlin in 1969 to relieve the BMW Plant Munich.
The BMW 3 Series, to this day the BMW brand’s most successful model series, entered production at the Munich Plant in 1975. Numerous innovations in control and production technology were introduced at the Milbertshofen Plant for the first time – such as the world’s first fully-automated production of the under-body assembly in the body shop. The 1980s were characterised by ongoing expansion of BMW’s production network, with new plants in Steyr, Regensburg and Wackersdorf all going on stream. After the foundry was moved to Landshut and the BMW’s Research and Innovation Centre completed in the north of Munich, the Munich Plant concentrated on the production of automobiles and engines from the mid-80s on. One of the key decisions taken in the ’90s was to build all of the BMW Group’s large, high-performance M engines at the Munich Plant.

BMW attaches great importance to the environmental-friendliness of its production in the heart of the city. It established a neighbourhood forum in 1994 and won the City of Munich’s Environmental Award in 2003.

All automobile production technologies are accommodated at the Munich Plant over an area of 500,000 square metres: the Press Shop, Body Shop, Paint Shop and Assembly, as well as Engine Production and the Production of Interior Fittings. The modifications necessary for production of current and future models of the BMW 3 Series, as well as future engine generations, required almost the same investment as a brand-new production plant. All five generations of the BMW 3 Series were built at this BMW Plant rich in tradition.