In the early days of Bavarian Motor Works, the four-cylinder engine was the basis for many of the cars. The combination of the small, two-door BMW sedans and the M10 four banger was successful in a big way. By the early 1970’s the diminutive New Klasse was able to step out from the shadow of the bigger E3 and E9 sedans and coupes powered by 3.0 liter inline-sixes and establish its own identity. Namely, the 2002tii and 2002 Turbo placed BMW’s turbocharged four cylinder engines on the map as both reliable and powerful during an energy crisis. Yes, the M10 engine was a force to be reckoned with.

Fast forward a decade and Formula One’s Turbo Era is in full swing. A modified version of the BMW M12 (a slightly revised version of the original M10), turbocharged, put out 1,500 horsepower in qualifying trim and brought Nelson Piquet another world championship. The four cylinder concept found further success in the naturally-aspirated iteration called the S14 in a little known car named the E30 M3. 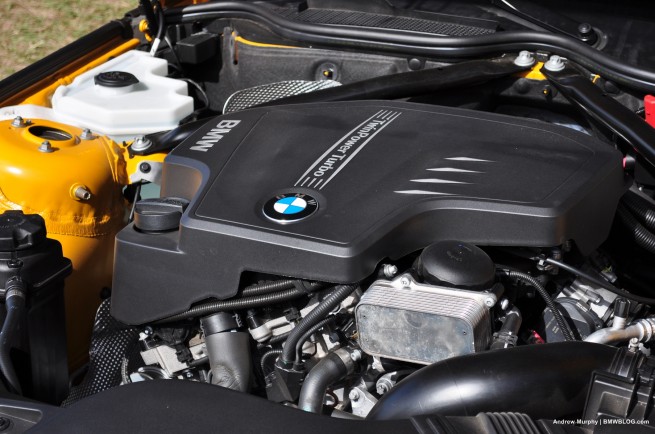 Three decades on and the four cylinder engine has all but left the North American market. Due in large part to the mentality of Americans that a four cylinder simply isn’t a premium engine and therefore doesn’t belong in the likes of a BMW – despite Audi having successfully applied this formula to the A4 for over a decade. Apparently the adage a gentleman never drives anywhere with less than six cylinders in front of him rings true?

Well, for 2012, BMW have brought back its newest four cylinder, the N20, a single turbo four-cylinder engine producing 240 horsepower with a tasty 260 lb-ft of torque. Many of the hardcore fan base have criticized BMW for substituting the smaller 2.0 liter N20 for the outgoing naturally-aspirated 3.0 liter inline-six. While I will miss the N52, an intelligent, lightweight big 6, the N20 represents the new direction many car manufacturers must go with the impending CAFÉ regulations. The N20 will reportedly return 20% better economy over the N52 – going a long way towards BMW hitting the required fleet average with the forthcoming regulatory changes. Whether enthusiasts like it or not, this is the way forward – that or would you rather BMW stop selling cars in North America?

While the N52 was a great engine – the best of the naturally-aspirated sixes with its forward-thinking magnesium block – it will disappear in 2012 and in its place, something down a liter of displacement and short two cylinders. The good news is the N20 is actually a solid follow-up to the N52/N53 as BMW’s base engine in the 1,3,5, X3 and Z ranges. 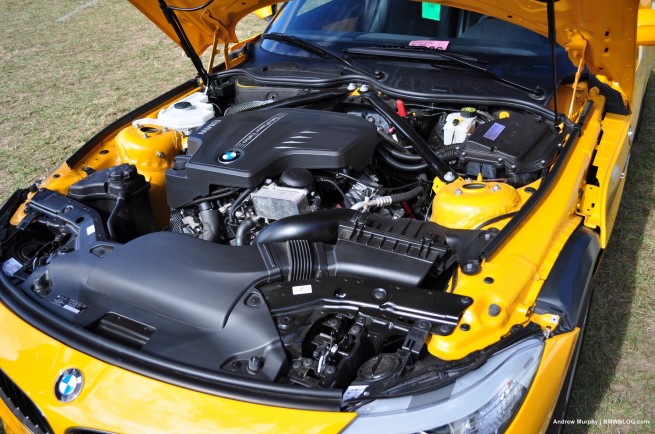 I was able to test the N20 recently in the first two guises in which it will appear in North America: the 2012 528i and 2012 Z4 sDrive28i. Interestingly, the N20 initially finds itself in two cars directed toward radically opposing buyers. Ironically, with the outgoing N52 it was an engine that felt the same no matter the chassis in which it sat – an E90 328i or an X3 xDrive28i, the character of the big six was always there. This is where the N20 deviates and shows a much more Jekyll & Hyde personality.

My first experience with the N20 came with the F10 528i. After a quick shot up the always lovely, construction-ridden Interstate 95 from Jacksonville to gorgeous Hilton Head Island, I caught up with BMW of North America at the 10th annual Hilton Head Island Concours d’Elegance. Upon arriving at the concours, where BMW was the featured marque, I hopped into a 2012 Alpine White BMW 528i powered by the TwinScroll 2.0 liter turbo. 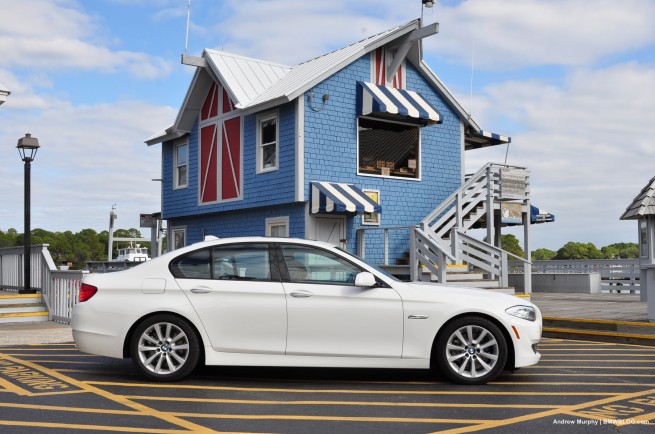 Upon starting the 528i, there was no perceivable difference from the old six cylinder and new turbo four. Mated to the 8-speed ZF gearbox, the N20 is a buttery smooth proposition and the two seem well-paired when executing gear changes. Surprisingly, for being a single turbo engine, there is never a sensation of turbo lag – the engine felt spritely when letting the gearbox shift for you. While cruising, and with the Adaptive Drive system in either Comfort or ECO modes, you’re left with a feeling that you sometimes get from a Rolls Royce Phantom – a nearly silent engine in a massive car as you’re serenely wafted along down country roads.

In all honesty, the average 528i buyer will likely never tell a difference from the 2011 528i to the 2012 528i – and that’s not a bad thing. The consumers interested in a 528i will never feel as though they’ve somehow been robbed of the BMWness by having a turbocharged four cylinder in place of the iconic big six in the engine bay.

The Z4 with the N20 is a wholly different car all together – and not just because the car weighs about 500 lbs less, loses two doors and its roof. This is where enthusiasts will want to check back in to this article. 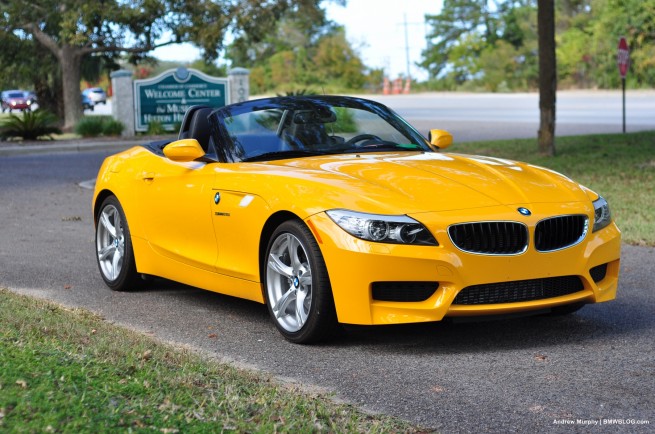 The N20 as the power plant for the 2012 Z4 convertible is where the engine truly shines as an enthusiast’s motor and comes into its own. On the second day of the Hilton Head Island Concours, I was able to hop into our Z4 equipped with the M Sport/Citrus Yellow Package and the always-eye-catching Atacama Yellow – certainly a color that will catch the attention of your local smokeys on the back roads leading to Hilton Head.

Mercifully and juxtaposed to the 5 Series, the Z4 came with the wonderful , short-throw six speed manual. This was the drive I’d been waiting for all weekend, a transmission that would give me more direct access to the 260 lb-ft of torque the N20 touts, a full 60 lb-ft more than the N52 – and a good 1,500 RPM’s sooner too!

Thumbing the Start/Stop button, the little N20 burbled to life with a bit of a growl from the exhaust. With heavy traffic surrounding the Concours, I engaged in a bit of around town driving to warm up the engine.  One very quick “feature” of the engine I was found was a wonderfully angry, snorting overrun whenever I lifted off the throttle. It felt reminiscent of a MINI Cooper JCW-equipped coupe and it’s overrun with the 1.6L turbocharged engine. With an additional .4L of displacement, the N20-equipped Z4 sounds just that much better, though! BMW have done their homework when it comes to outfitting N20-powered cars with the appropriate exhaust system and the respective target market of the car. The 2012 Z4 sDrive28i growls and blats out a wonderful exhaust note that harkens back to old Triumph TR6’s and MG roadsters – less of a raspy four banger note ala a Honda S2000. In 528i application, the engine is relatively quiet much more sedate with a noticeably scaled demeanor.

Upon finding myself back on the William Hilton Parkway I was able to open up the full tap on the littlest BMW engine in North America. The N20 did not disappoint on torque – it rewarded a heavy right foot with a punch of torque and a seat-of-your-pants feeling of speed.  Where the N52 felt a bit sluggish down low in the rev range, the N20 rewarded with instant acceleration – in Sport+ mode, the car feels downright racey though with a somewhat  sensitive throttle response.  The engine feels like Mr. Hyde, a monster in a small frame but always up to go rampaging across the countryside. Another interesting feature of the N20 (in Z4 guise) is the noticeable sound of the turbo as it spools up and hurls further power into the engine – an interesting touch that adds to the sporty sound to the engine and is a bit surprising as BMW embraces the turbocharger versus trying to disguise the whoosh. It makes you want to push the tachometer closer and closer toward the 7,000 RPM.  However, therein lies a problem with the nature of the N20. 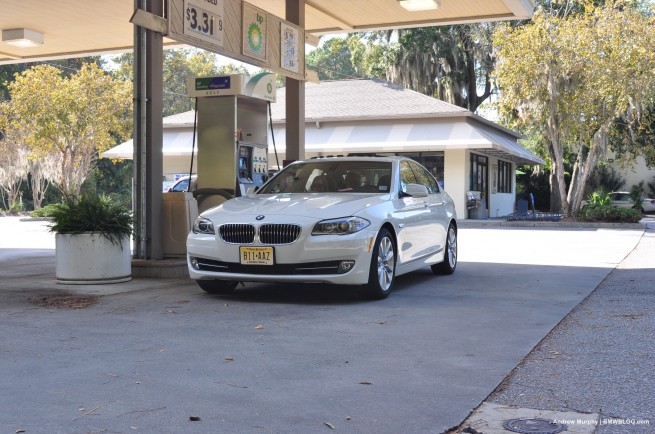 With the previous naturally aspirated inline-sixes, the engines required the driver to work through the gears to extract the most of the power plant – keeping the gears low and the revs high. Typically, the big sixes come into their own at 3,500 revs and up, the N52/N53 plants did provide more torque at lower revs that earlier inline sixes. The N20 turbo four, however, gives nearly instant access to power and throws all of its torque to the wheels with calculating German precision from 1,250 to 5,000 RPM. Above 5,000 RPM, there is distinct drop off in the power curve leaving you with a feeling that perhaps the N20 could have been better off with either a lower redline or perhaps a higher revving second turbo. With this in mind, the best way to approach the N20 is to treat it as an inverted inline-six.

Whereas a driver would row the gears to keep the revs above 4,000 RPMs in the six cylinder, the N20 requires the driver to hold the revs under 5,000 to 5,500 RPM to stay in the meat of the power band.  With a manual transmission, both platforms require a lot of driver involvement in the overall experience but, just like the manner in which each feed the engine, the sixes and the N20 go about it in a very different manner.  This isn’t necessarily a criticism of the N20; the forceful little engine more than makes up for the shortcomings of awkward power delivery, but definitely a feeling that takes a bit of getting used to.

At the end of the day, I came away from the turbocharged Z4 sDrive28i with a sense of satisfaction in terms of a performance power plant. Less so in the 528i but that’s to be expected with the F10 as its clearly aimed at a different demographic. Regardless, the N20 is well-executed in both models. The way in which BMW has made the N20 adjustable based on the chassis and needs of the market is impressive and feels like an entirely different engine in the Z4 compared to the 5 Series. This hints at potentially cautious optimism that a turbocharged four cylinder pushing BMW toward increased fleet efficiency isn’t going to cripple the performance on which BMW has built a reputation over the last few decades.

While the N20 is focused towards improved fuel efficiency, other journalists noted low 30’s MPG figures driving the 528i from Spartanburg to Hilton Head Island on a mix of highway and back roads, I decided to forego what everyone already knows: the N20 is efficient and improves fuel economy as much as  a claimed 20% over the outgoing N52/N53 – but how does it drive? Well, we’re happy to report is drives quite well. While I didn’t come away feeling like Nelson Piquet in his turbocharged 1983 BT52  – I do feel confident that 99.9% of buyers will not be regretting the additional 60 lb-ft of torque when the punch the throttle on the new N20 and leave the big sixes in the dust. 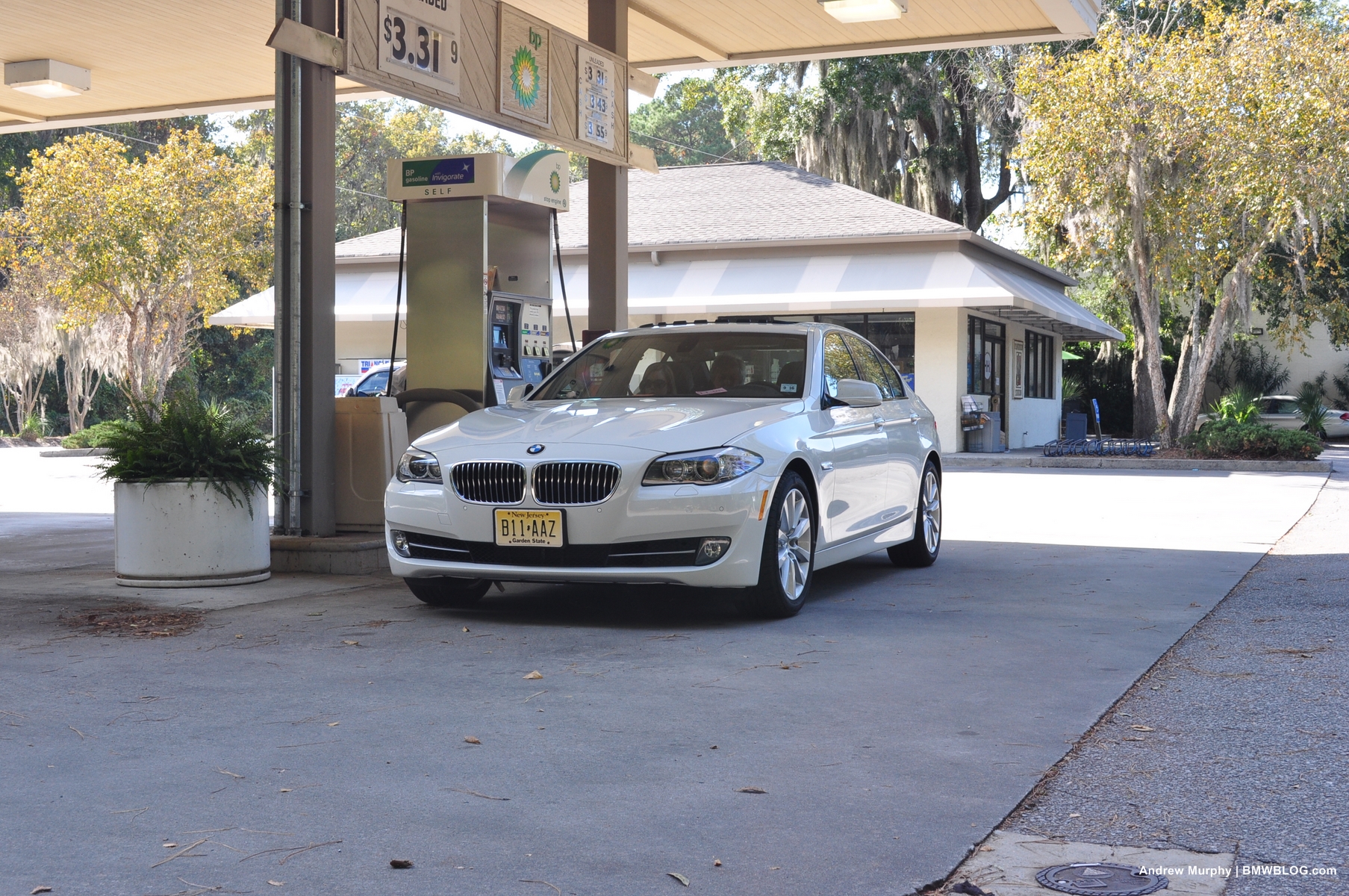 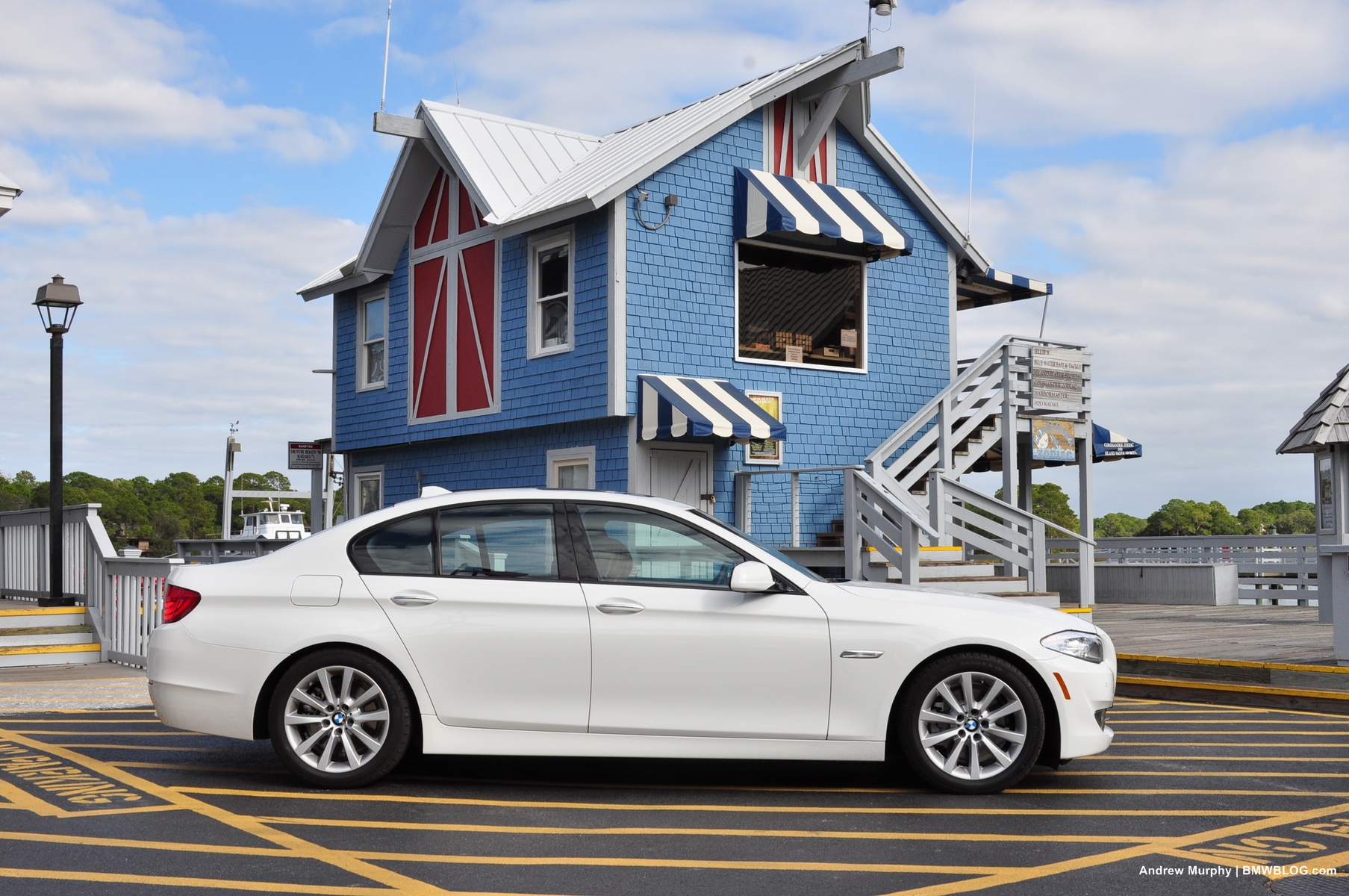 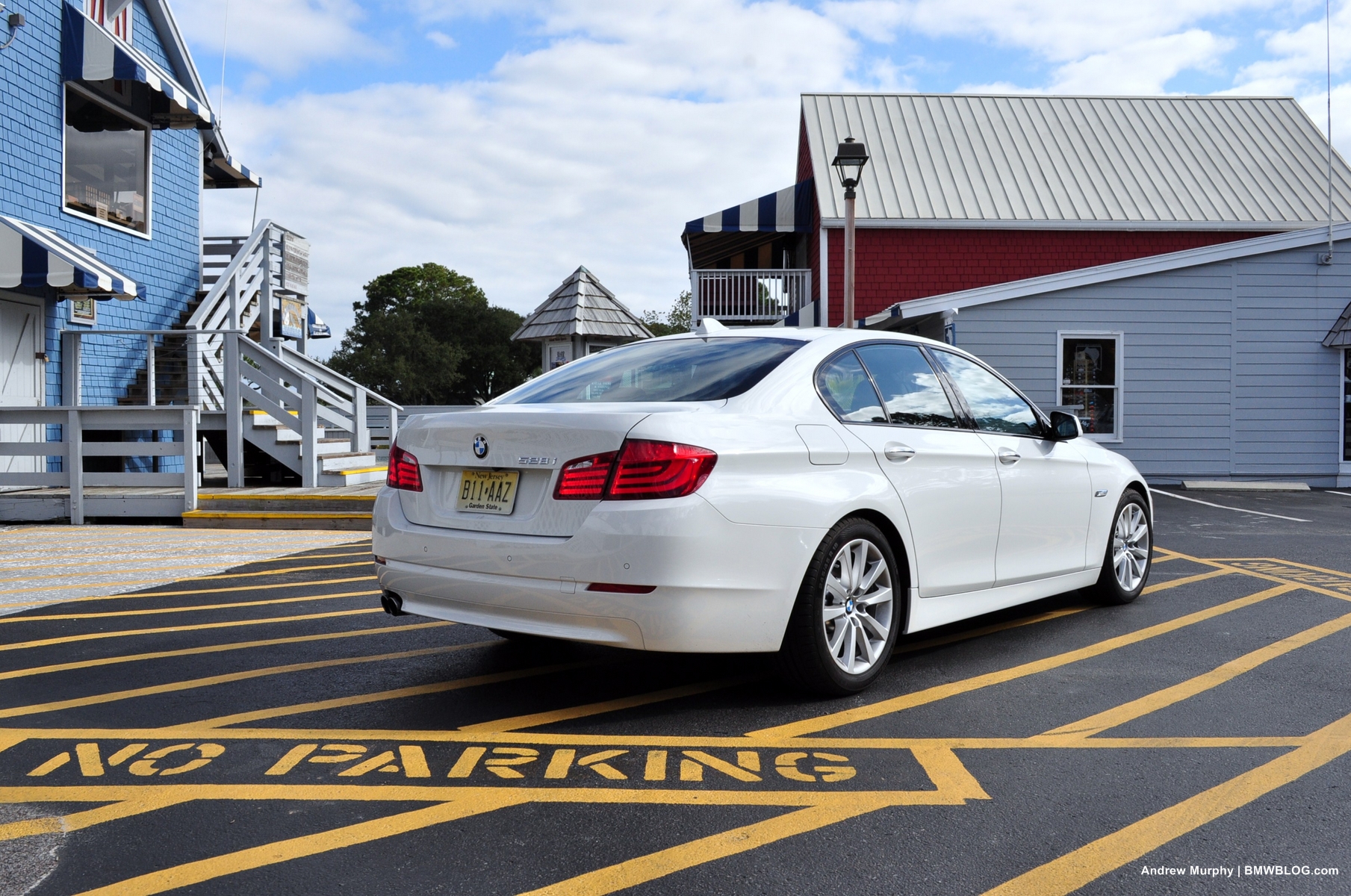 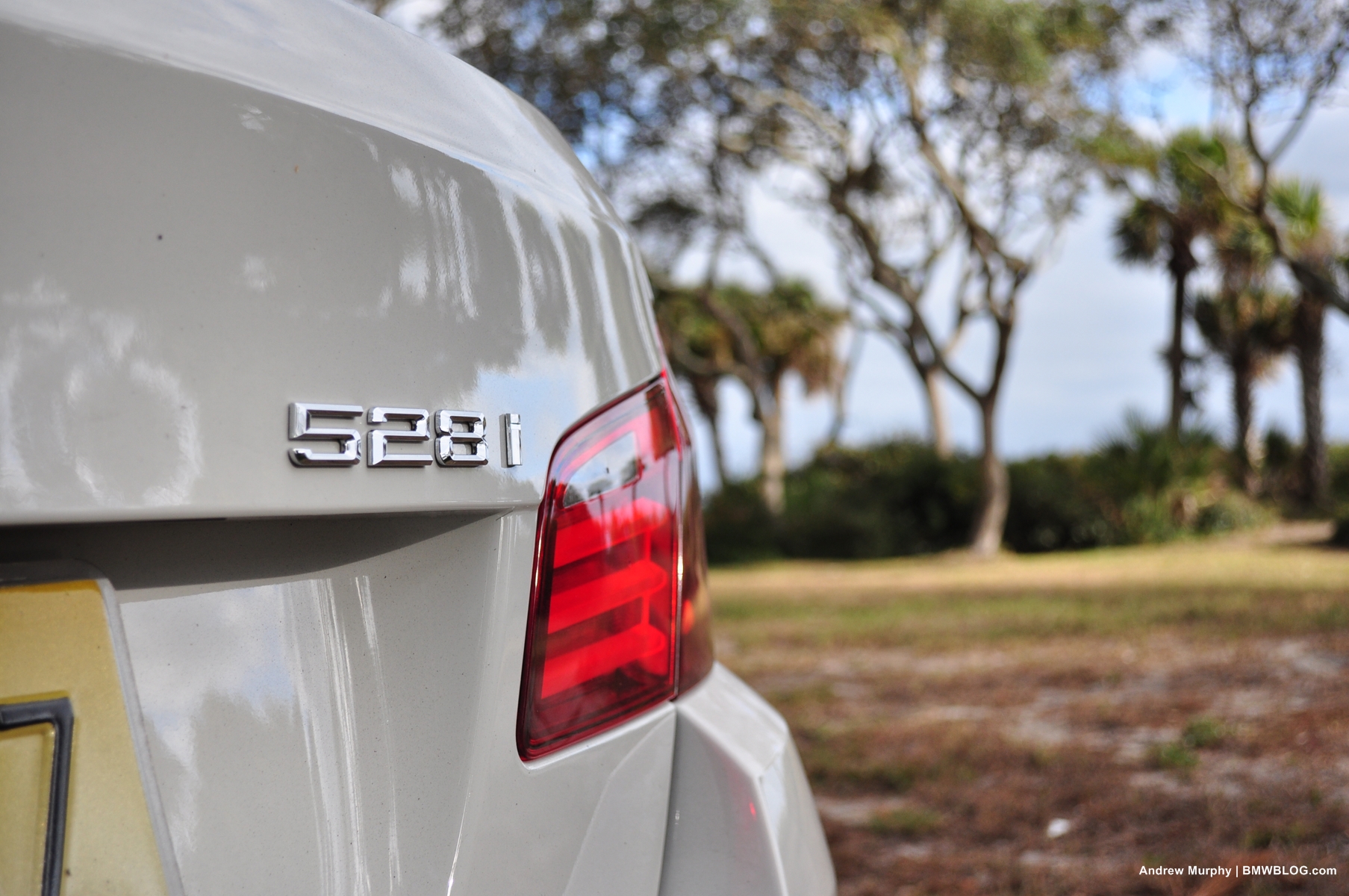 Disclaimer: BMW hosted and dined us at Hilton Head Island Concourse, as well as putting us up in a beautiful hotel. No apple strudel or bratwurst were included.