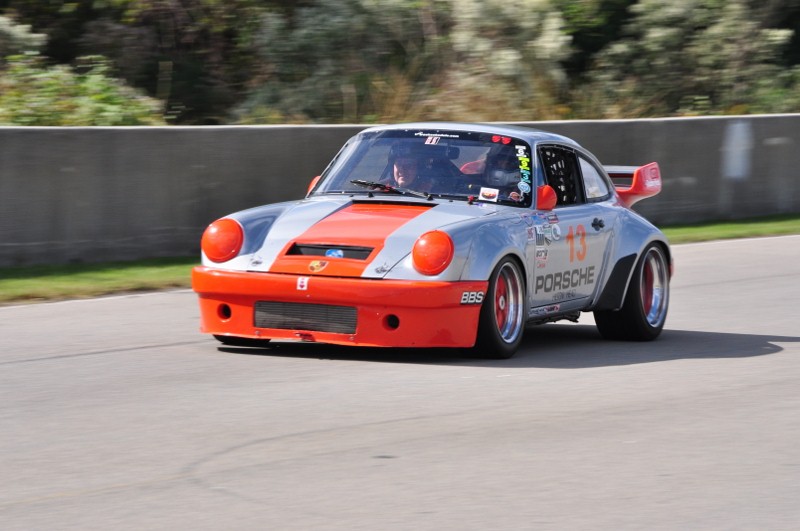 The objects ahead are quick-moving blurs of white with streaks of red, blue and purple sliding against a dark green background. Two corners later and I’m still death-gripping the the door but I’ve finally been able to lock eyes back on the two blurs streaking ahead: a 1975 BMW CSL being chased by a BMW 2002 racer of similar livery. About the time I’m able to gather my senses of the speed at which I’m late-braking for a corner an Alpine White E90 M3 shoots by and power slides in a wide, arching angle thru the corner and begins an attack on its older siblings. The gentleman in the driver’s seat next to me quips “Denny is a pretty good drifter” in a very nonchalant manner. The guy next to me should know after all, because the pilot of this particular Performance Center E92 M3 is none other than Joey Hand, 2-time ALMS GT champion and winner of the 2011 24 Hours of Daytona.

Our frenzied pace continued for three laps as Borris Said led our group in the CSL while the rest of us attempted to keep up – though those of us in the modern BMW’s were enjoying the sure-footed power slides around the Grand Prize of America track at the beautiful Hutchinson Island located on the Savannah River in Savnnah, Georgia.

This is my introduction and first hour at the Savannah Speed Classic and I’m disappointed to realize I missed such a great event over the previous nine years its taken place. The rides in BMWs of old and new is only a very small piece of the much bigger event that is the Savannah Speed Classic – though the rides were part of an auction with proceeds going to charity.  As we’ve mentioned, the Speed Classic is part of the week-long lead-in to the Hilton Head Island Concours d’Elegance – held the weekend following the Speed Classic. More on that later. The Speed Classic portion was held in conjunction with the reknowned group Historic Sportscar Racing(HSR) who are responsible for many fantastic vintage racing events throughout the country and their event at the Grand Prize of America track on Hutchinson Island does not disappoint.

The Speed Classic is the ying to the Hilton Head Island Concours’ yang. With the concours’ focus on classic and immaculate cars of all shapes and sizes, the Speed Classic focuses on one thing: race cars.  Throughout the weekend visitors can watch an incredible array of classic racing iron pound around the 1.9 mile road course and see cars from across 6 decades and dozens of series compete. I was only able to attend the Saturday portion of the races but saw classic BMW’s to Caterhams, open-wheel former Indy cars to a variety of racing motorcycles. This event literally has something for every racing fan.

However, if you do decide to step away from the track for a moment, you’re privy to a number of hospitality tents from high-end manufacturers offering up test drives in their latest and greatest. BMW, Porsche and Jaguar were on-hand offering eager fans test drives in a variety of cars. BMW had on hand a 335is convertible, X5, and X3 just to name a few. The infield also carries with it all of the hidden treasures that can be found at a typical car corral at a race with vintage Bavarians, old school Porsches and classic Ferraris.

Even more fun are the accomplished drivers on-hand to both compete and help host the event each year. Most notable was the presence of Boris Said, the 2011 Grand Marshal of the Speed Classic, Hurley Haywood of Porsche racing fame and the dynamic driving duo that is BMW’s own Bill Auberlen and Joey Hand. Each took a few minutes to discuss their favorite moments in their respective racing careers which was as hilarious as much as it was interesting. If you ever meet Boris Said, be sure to ask him about the story with a peanut butter and jelly sandwich and Dale Earnhardt Senior!

The Savannah Speed Classic is only in its third year at the Hutchinson Island track (previously at the Roebling Road course) but it is something any car fan must attend. With events like Porsche’s Rennsport and BMW’s Oktoberfest on the rise in terms of mixing classic cars and racing, be sure not to miss the Savannah Speed Classic next year as it continues to grow and attract more and more cars.

This coming weekend, BMW will continue its role as the honored marque for the 2011 Hilton Head Island Concours d’Elegance with a large contingent of vehicles on-hand to represent the BMW brand. BMW will be represented in the concours in both its road car and Motorrad collection with a BMW R7, a rare 1934 one-of-a-kind prototype, a 1982 BMW 320i Turbo race car, and the defacto pre-WWII BMW: the 328 Roadster. BMW of North America is expected to display a handful of their private collect with a BMW 2002tii, an M1 and the achingly beautiful 507 Roadster. For judging purposes, BMW’s will be broken into their own distinct categories: BMW Pre WWII; BMW Post WWII; BMW Race Cars and BMW Motorcycles.

The events for this coming week and weekend start as early as Wednesday with the culmination of the week with a Car Club Jamboree on Saturday and the full Concours kicking off Sunday morning. We will be on Hilton Head Island for the full weekend providing live coverage. Additionally, we’ll have our first shot at a handful of U.S. spec N20-powered BMW’s!

9 responses to “BMW the Centerpiece of Savannah Speed Classic”