The weekend opened with the 55 M3 GT of Dirk Werner and Bill Auberlen landing a solid P2 in qualifying with the 56 M3 GT of Joey Hand and Dirk Muller qualifying in P3. A AF Corse Ferrari 458GT managed pole position after Dirk Muller was inexplicably given two black flags during qualifying – which have yet to be explained. 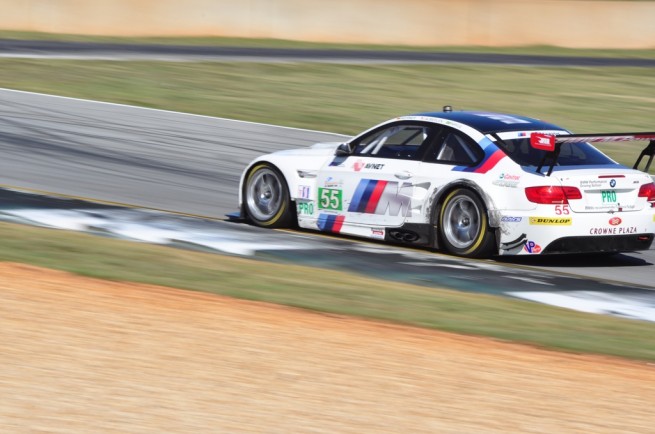 However, on race day, the 55 M3 GT quickly dispatched the Ferrari in the opening laps with Dirk Werner posting up an impressive double-stint. By race end – the pair of BMW’s found themselves in 3rd and 9th, with the 55 car just missing second place to the Long/Bergmeister Flying Lizard GT3 RSR. Dirk Muller brought home the 56 car in the final stint for P9. The result? BMW won the manufacturer’s championship in GTE-Pro in addition to victory in the Green X Challenge – a tip of the hat to the Efficient Dynamics program as proof it gives tangible results.

Unfortunately, the last minute pass by Bergmeister on Werner ultimately meant that Michellin would have enough points to lay claim to the 2011 tire manufacturer championship. Regardless, Bill Auberlen and Dirk Werner were able to secure 3rd place in the drivers’ points standings for the 2011 season – a very lucrative season for BMW Team RLL!

Congratulations to BMW Team RLL for pulling off an amazing series of victories and locking up the championship prior to the final race. Watch this space as tomorrow we will have a more in-depth review of the race and the season along with a mega-gallery of photos from Road Atlanta.