Editorial: What I Learned at the Frankfurt Auto Show

Home » Editorial: What I Learned at the Frankfurt Auto Show

Frankfurt am Main – I brought the extra stout umbrella along knowing that Frankfurt am Main is the financial capitol of Europe and, given the uncertainty of the European economic union, it might be raining bankers in the financial district. Fortunately, I didn’t need the umbrella. And surprisingly, though financial doom and gloom dominated the headlines in the papers, it didn’t appear to be an undercurrent at the IAA.

I suspect that German industry understands that if the Germans bolt from the Euro, or if their profligate partners do, it would spell a much stronger currency that the Germans would be tied to. That would increase the price of German goods and make them more difficult to sell, putting a great deal of pressure on the social fabric that has benefited from a strong manufacturing sector. So the Germans are in a tough spot.

No one likes continually bailing out their spendthrift relatives, but the alternative may be tough to bear also. Expect a lot of grumbling from the German public – but behind the scenes, the politicians will work for a solution that makes economic sense. The Germans want to be good neighbors.

But, again, in the 11 halls and miles of corridors of the Frankfurt Messe, not a discouraging word was heard by this journalist. Grumbling about the expanse of the fair grounds yes, but an upbeat mood was put forward by the automobile industry.

The automobile is 125 years old, and there was a wonderful display of some very old cars in one of the halls. The Lohner-Porsche on display stands out as a harbinger from the past into the present. A massive electric vehicle, it was a highlight for students of automotive history.

BMW’s past was represented by a 328 coupe and roadster. Often seen circulating the indoor track in Hall 11, the 328 was the car that cemented BMW’s reputation as an auto maker. The 328 was tied to the present by the new 6er, a stunning Grand Touring car in coupe and convertible trim.

There was a 6er coupe sitting in the BMW Individual display. A sleek white exterior was matched to a dark tan and charcoal interior that utilized contrasting stitching in the leather, it was quite luxurious. And it appeared to have every available option. With the rest of the journalists otherwise occupied, I decided to spend a few minutes in the interior of the 6er, and lo and behold it had power. So I fired up the ‘stereo’.

The Bang & Olufson audio system in the 6er coupe is worth every penny of its $3,700 US price tag. (See more here: http://www.bang-olufsen.com/bmw) I  listened to a cover of the old jazz standard, ‘What a Difference a
Day Made’, and was pretty well blown away by the system’s coherence and cleanliness. Marvelous sound.

The present for BMW was also represented by the new 1er and the soon to be released M5. The new 1er’s interior is much better than the previous iteration. Much more sculpting of the surfaces going on and it gives it a much more upscale feeling subsequently. The iDrive display is huge and is very detailed. I still have reservations about the front fascia though, even after seeing it in person. But in discussing the styling of the eventual 1er (or is it possibly a 2er) coupe with Karim Habib, I was told that I would be happy with its styling.

The 1er (in it’s five door form) has a wide range of 4 cylinder gas and diesel engines available, the 116d occupies the entry level rung of the ladder, and the 118i the top rung. I would expect more engine options, including an entry level 3 cylinder at some point and a higher powered four cylinder gas engine. It will be interesting to see if the coupe will offer a 6 cylinder or just an up-rated version of the N20 four gas engine.

We’ll have to wait and see, the coupe for the first gen 1er debuted four years after the original model. I suspect they’ll speed up that schedule for this generation of the 1er.

The new M5 is about to be presented to the press for driving evaluation. It utilizes a 4.4L turbo-charged V8 with TwinPower and turbo-charging. It utilizes the old ‘bundle of snakes’ concept of routing exhaust gas to the twin scroll turbo-chargers to optimize turbine operation. The new M5 smashes the outgoing V10s torque numbers (and from a very low RPM), it has ore horsepower, and significantly better fuel economy.

The M division gets involved early and often in the engineering design phase of new models. This has positive benefits for the eventual M offering, but also for the standard version of the vehicle. For instance if M recommends more torsionally rigidity to cope with the dynamics they can generate, the base car benefits too.

In the case of torsional rigidity, the stiffer the body shell, the less the suspension has to compensate for body flex allowing to concentrate more on its primary job keeping the car ‘glued to road’ with minimal disruption to the occupants of the car.

M did trial the V10 along with the V8 in the new M5 but the V8 had the performance and EffecientDynamics that made it a no brainer. And it was pointed out, emphatically, that the engine in the M5 is not the same as the one in the X5 M or X6 M.

As for the future, BMW has, as anyone who has been paying attention to the interwebs knows, been looking at front wheel drive. However as BMWBLOG predicted it will be limited to small vehicles (think A & B class) and will be designed around more frugal engine offerings. (In other words don’t look for a M version of whatever BMW decides to do regarding a front drive car.) This won’t happen soon, but thanks to the flexible firewall location of BMW’s L7 platform, they can make an offering in the A & B class markets.

The stars of BMW’s show were the future, of course. The i3 and i8 were kept front and center throughout the press days. The i3 is the volume proposition, the car that will be known by buyers. The i8’s role is as the halo for the sub-brand. It will be carefully metered out once in production and undoubtedly command a premium price. It should represent the pinnacle of hybrid technology. The idea of bringing together a separate set of front and rear drivetrains without a mechanical transfer case is novel. The amount of software required to make that happen is also a bold move. 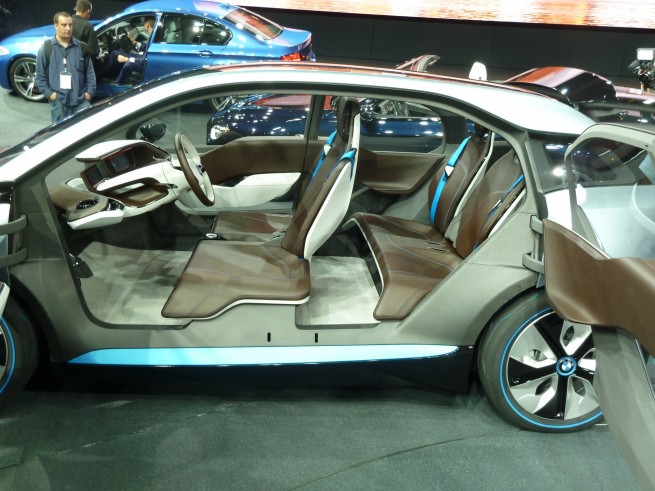 The i3 though is the first of the models that will available for purchase and it will utilize the aluminum power module and carbon fiber reinforced plastic passenger cell. Discussing the weight savings program with the BMW team was refreshing. It was good to hear the old idea of adding lightness in discussing the i3. They repeated the wise old lines, “Once we saved weight in this component, we could save weight in another”, and so the virtuous cycle continues.

The Mini coupe was on display with its controversial roof line. But it has a big boot (which you’d except for a vehicle without back seats). The Mini Paceman has gotten a green light for production and we’ll see it in the future. So the Mini line continues to expand. The Mini is a bit more restricted in its styling idioms than BMW, and it will be interesting to see how far the brand can be expanded before there’s a Mini that no longer looks like a Mini.

Rolls Royce had a very interesting display with a great looking two door coupe revealed. The pess of journalists at the unveil was amazing. Was it the anticipation of seeing the car or the star brought in to help unveil it? Suspect as much the latter as the former, Rowan Atkinson being the star in question. [The press pressed for Atkinson. – ed] The Rolls Royce display also had a ‘back room’ where, away from the ‘lookie lous’, potential clients could be treated to fine British hospitality along with a refined sales pitch.

Above the whole hall is the BMW lounge, the entrance to which is monitored even during press days. It is in the lounge that a lot of interviews took place during press days and where business will be conducted during the public days. The lounge has been styled carefully – a functional modernism to the furnishings and decorations. But behind a solid door on the far side from the entrance to the lounge is a separate area where BMW Security Vehicles can conduct business with potential clients. The room has no windows to the lounge which protects the client’s identity. In the room is the armored X5 and several displays of the materials used in the process of forging a vehicle capable of withstanding considerable mayhem. This one room represents a seldom discussed aspect of BMW’s premium image and services.

BMW had a lot to show this year, even with a tumultuous economy. They introduced the new 1er, a staggeringly powerful new M5, a Rolls Royce Phantom Coupe, and the Mini Coupe. But the stars of the show are illuminating BMW’s way towards the future, the BMW i3 and i8.

14 responses to “Editorial: What I Learned at the Frankfurt Auto Show”