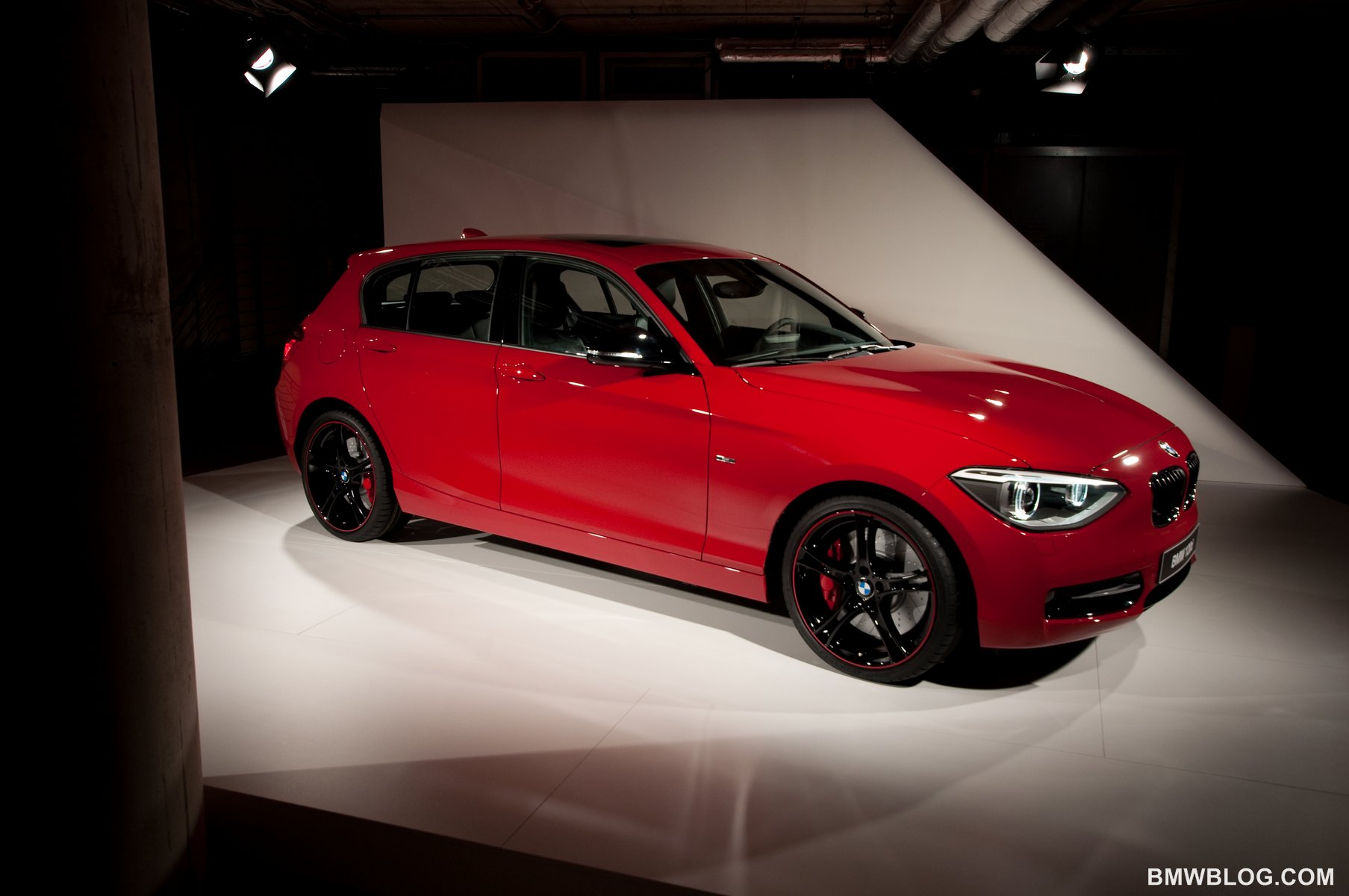 “Beauty is in the eye of the beholder,” so the saying goes. And while opinions varied wildly on the web upon seeing the first official photos of BMW’s new 1 series, a general consensus surfaced that its styling was polarizing at best, and downright unattractive at worst – a botch job, a misstep for the brand.

What a difference a day can make. Fast forward to BMW’s launch presentation for the new 2012 BMW 1 Series in Berlin and we found a sight for our sore eyes; the very hatch-back sedan that made them sore in photos. My first moments with the car went something like this: walk out of airport following arduous 11 hour flight toting gear and suitcase en-route to the BMW pavilion, a stone’s throw from the terminal. Finally, rubbing eyes, and enjoying a big yawn, lift head from asphalt to assess line of red cars to my left. Holly jumping schnitzels. It’s beautiful. 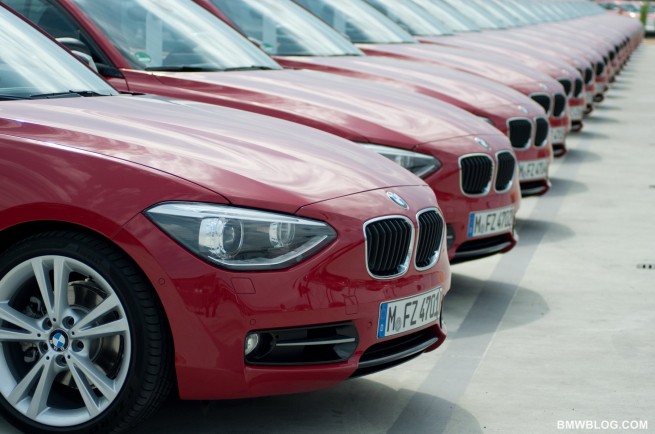 Did they put something in the Kool-aid? No, in-fact they didn’t serve any Kool-aid and Germans are far too cultured to spike wheat beer. The truth is, and we’ll cut to the chase: BMW’s F20 1 series is a handsome car from most angles, gorgeous from some, and at the very least ‘clean’ from one other.

In all honesty, this was a big surprise, even after becoming acquainted in recent years to a line of BMW cars that appear far better in 3D than 2D. Initial complaints from the early photos were as follows: too much dead space to the lower medial area beside the head lights, a rather boring and uninteresting rear end, and according to some readers, “saggy head light fixtures,” “kidney grills too small in size,” and “overall poor proportions.” Well that pretty much wraps it up, no? But before you drag ‘Ol Yeller out to the back-yard shed and put him out of his misery, we urge you to lay your eyes upon this one in person. You will be surprised or our name is MERCEDESBLOG.

Styling, by definition, is a subjective topic, so of course personal opinion reigns supreme – but general consensus still holds its clout and at the end of the day, this largely determines which cars sell. Considering the importance of BMW’s 1 series for the brand in an ever-increasingly compact automotive world, the looks of this car are worth a few words of consideration. 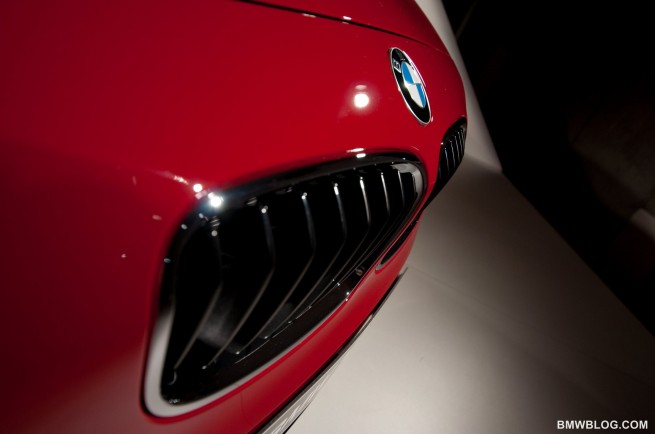 Let’s start at the front end. BMW has installed its aggressive and bold “shark nose,” which has a pronounced negative angle dropping down to the bumper. The grill at first jaunts out from the top, then folding each slat in on it-self, reclines into the bumper along a horizontal line. This horizontal line continues into the body work on both sides of the grill where it goes on to meet up with a diagonal line dropping down parallel to the lower aspect of the head lights. Another prominence in the sheet metal rises diagonally off the top edge of the kidney grill and runs closely parallel to the top aspect of the head light. This sculpturing in its entirety creates a folding “Z” design which splashes paint into your eyes no matter what angle you are viewing the car from. It’s bold, it’s aggressive, and we like it. The headlights look menacing in person and we can’t heap enough praise upon their edgy, aggressive look. We can picture a very intimidating M car based upon this front end’s look.

The horizontal elements housed in the lower fascia air-intakes add symmetry and balance to the car, and we like how they intersect the fog lights. In a stroke of homage to BMW classic design, the bonnet features stamped lines spreading like a bow wave from the hood roundel to meet the windshield at roughly the noses of driver and passenger. This long power dome is a tribute to the longitudinally mounted engines of BMWs since the brand’s inception. 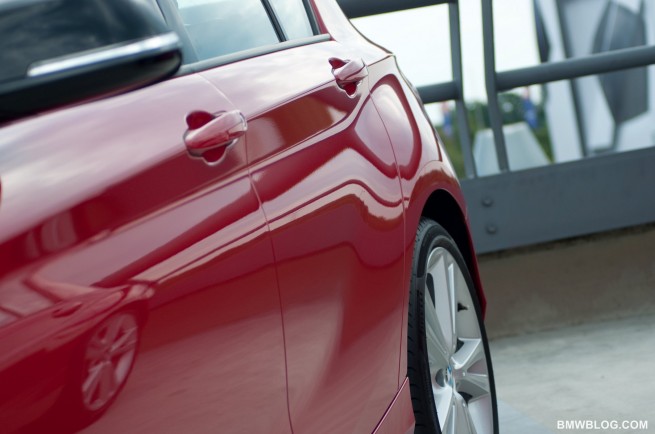 Moving to the front three-quarter aspect, we note a sharp, short sideways “V” crease sitting low in front of the front wheel. This crease picks up behind the front wheel, runs parallel to the rocker panel along the bottom edge of the car and then swoops upward diagonally before reaching the rear wheel. As BMW designers on-hand explained, this accentuates the rear-wheel-drive layout and lends to bragging rights as the only power-drifter in the hotly competitive segment. We fell in love with this bulging-muscle rear fender flare which borders on M car proportions. The side mirrors now feature integrated turn signals for the first time on the 1 series thanks to European safety standards.

From the side, BMW’s new 1 series features the now common convex shoulder line running the length of the car below the window line, this time incorporating the door handles within its shape. This shoulder line continues on to tuck neatly into the rear tail light housing, cleanly closing the long, drawn-out surface. When viewed from the side, the proportions of BMW’s latest car appear sporty and more roadster than hatch-back. The hood appears very long, leading to a raked back windshield. The rear of the green house stops just in front of the rear wheel, with the apex of the Hofmeister kink pointing just behind the rear wheel’s roundel. It all lends to a rakish design that looks polished yet sharp, and very sporty for a 5-door. If you look quickly (and this is a bit of a stretch), the overall proportions almost lend themselves to the Z3 based M roadster of yesteryear, again, the long hood being the key factor here.

Our biggest gripe is found at the rear. It looks almost identical to the VW Polo. I noticed this while driving along the autobahn following another 1 series, which happened upon a Polo. As fate had generously prepared for this visual comparison, the Polo happened to be sporting nearly the same shade of orange paint, and it made for a double-take, head-shake moment. They really are nearly identical when viewed squarely from behind. Move a few degrees left or right and the broad rear wheel fenders of the 1er will immediately differentiate it – but nonetheless, when you’re paying a premium price for a premium car, you expect it not to look like a Polo from any angle. 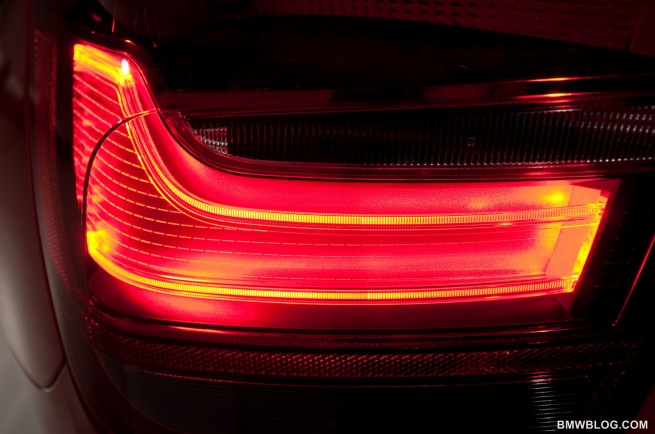 With tail lights on, the LED “L” shape design goes some way to compensate, the narrow and wide rear window looks imposing like a bunker gun slot, and the deeply concave horizontal sculpting of the rear hatch looks clean – but that’s the furthest we can go to compliment the rear end design. For our North American readers, this is not of much concern as BMW is not expected to bring this model State-side, but our European and Asian readers may find the rear styling more vexing. Or perhaps not – it’s your opinion that matters at the end of the day, before you sign the paperwork.

Two trim lines are optional when ordering BMW’s new 1 series. The sport line looks understated and focused with a blacked out grill and mirrors, larger 17″ wheels, and a 10 mm lower ride height. It is more to our sporting tastes, while the urban line models feature white mirrors, grill, lower front and rear central fascia lips, and bold, look-at-me white wheels.

When it comes to the interior, we can only offer praise. The 1 series’ inner confines are more reminiscent of the 6 series than any compact car’s interior has business being, and surrounds you in luxurious, upscale comfort. Thanks to increases in the 1 series’ dimensions to the tune of 85 mm in additional length and 17 mm of increased width, the F20 feels spacious for a car in this segment and now offers 21 mm more rear legroom. The luggage compartment has been expanded from 330 to 360 liters. With the rear seats folded down completely flat, luggage capacity is now expandable to 1,200 liters. The 40/20/40 rear seats lending to this added space are available as an option. 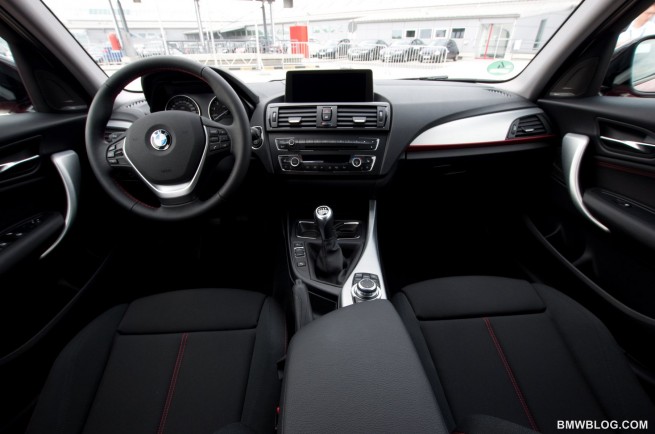 For us, the highlight of the interior design would have to be the striking blade-like front door handles. We learned from BMW’s interior designer that Asian calligraphy was of key inspiration for his design, and we can see the cutting edges of a samurai sword frequently throughout the interior and across the layered dash.

Thanks to its playful dynamics, our favorite angle to view BMW’s new 1 series is from behind the driver’s seat – and with turbos spooled we suspect most fellow road goers will view it from the rear. Truth be told, we enjoy viewing the new 1er from most angles – and the upcoming coupe and cabrio models will no doubt lend a kinder brush-stroke to the rear. But before you make your final pronouncements, see it in the flesh! We would hate to say, “I told you so.” 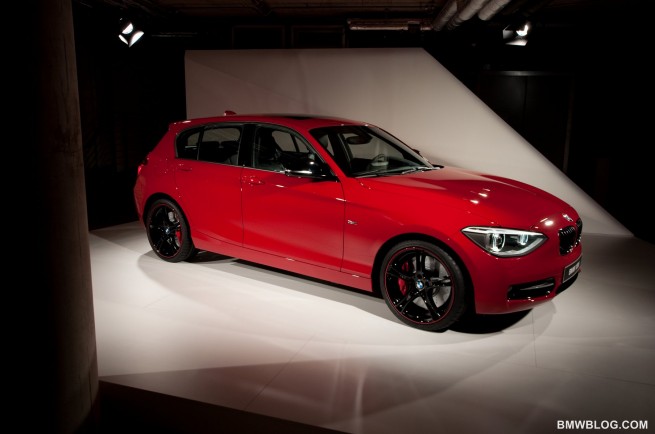 Stay tuned to BMWBLOG for our comprehensive coverage of the new 1 series coupe and cabrio versions upon their release.