Last year, BMW’s marketing agency began a worldwide search for siblings to feature in the BMW campaign ONE ORIGIN. TWO ORIGINALS. The agency was looking for a pair of brothers or sister pairs with different characters to star in photo shoots, film shoots, interviews, appearances in TV commercials and all that goes with it, but the product being advertised when not disclosed at the time.

Six siblings prevailed and the website 2originals.com takes us backstage to see their video portraits.

But which vehicles will they advertise? 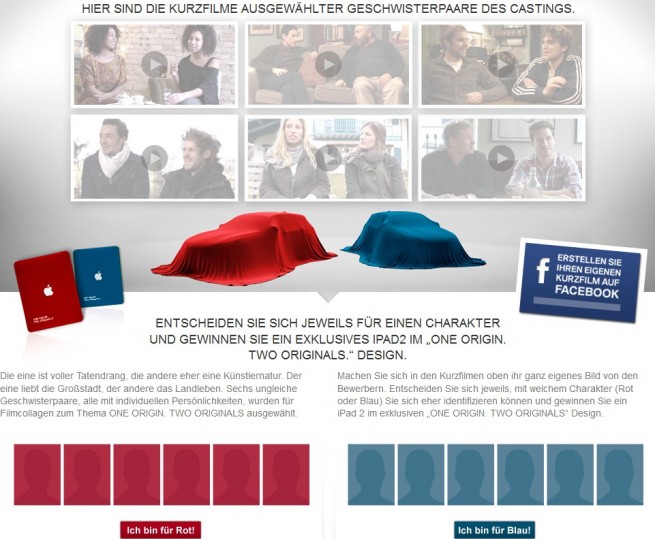 It is clear that BMW is thinking about two cars with similar backgrounds, but very different characters that appeal to different demographics. On the homepage of 2originals.com, the two BMW vehicles are being under wrap.

We believe that hidden underneath the veil is the new F20 BMW 1 Series. But the question remains, why two vehicles? We believe the two cars will differentiate themselves through the options offered, more of a Urban Line vs . Sports Line, with different exclusive exterior colors, wheels or interior trim.

Based on the videos seen, it is clear that the “Red” portrays the Sports Line while the “Blue” showcased the Urban Line.

The new F20 BMW 1 Series will be revealed in June and the car will make its official debut at the Frankfurt Motor Show.