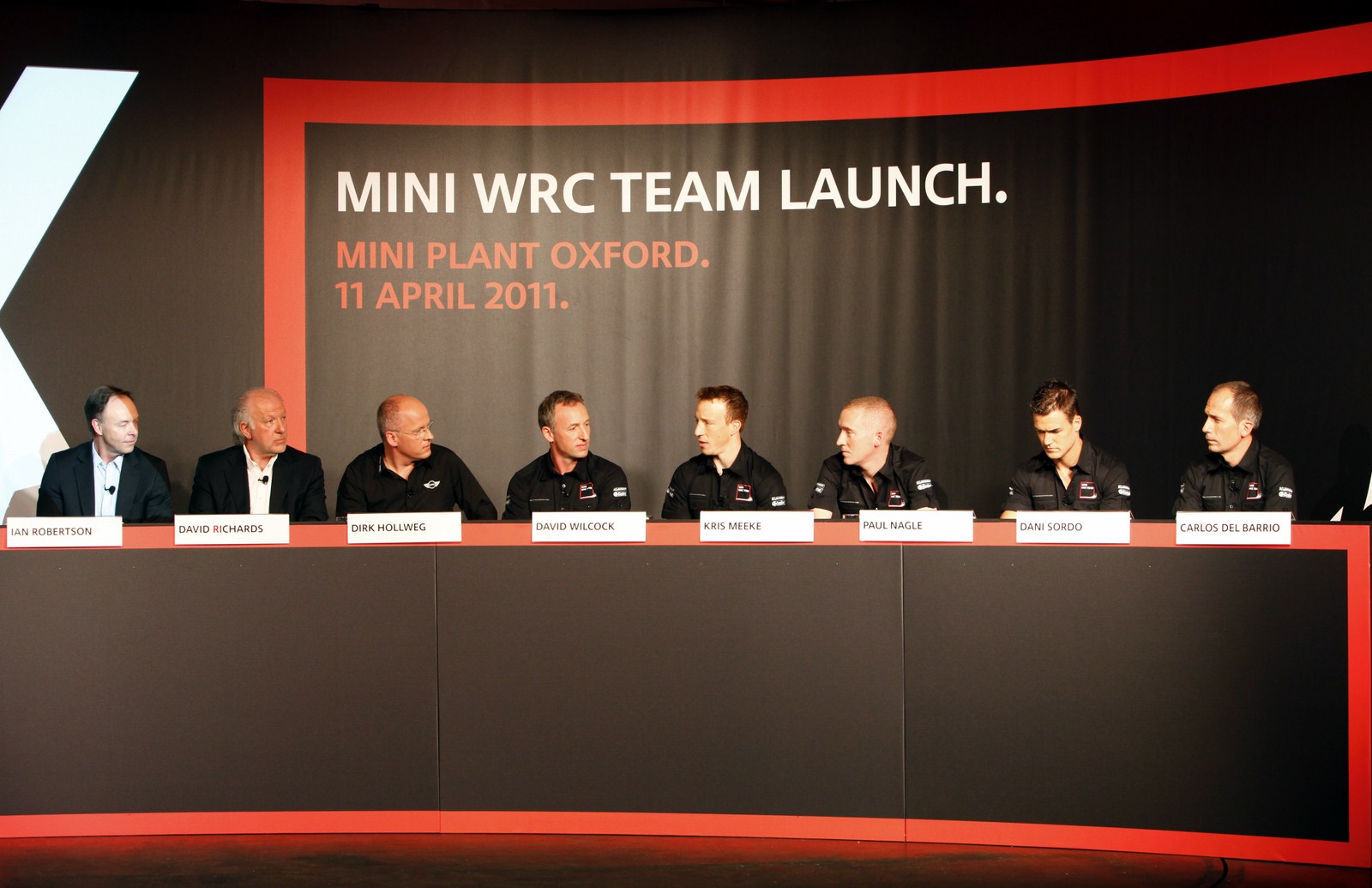 The return of MINI to one of the biggest stages in motorsport is approaching ever closer. On Monday, the MINI WRC Team was officially presented to the public at the Team Launch, which took place at the MINI Plant in Oxford (GB). This season, the team will contest six rounds of the FIA World Rally Championship (WRC) with the MINI John Cooper Works WRC. The car will be tested against its rivals for the first time at the Rally d’Italia Sardegna from 5th to 8th May 2011. The goal in the debut season is to gain valuable experience to be perfectly prepared to take on the entire 2012 World Rally Championship.

MINI can look back on a long history of success in rallying. Paddy Hopkirk (GB), Timo Mäkinen (FI) and Rauno Aaltonen (FI) won the Rallye Monte Carlo in the Classic Mini Cooper S in 1964, 1965 and 1967. Today’s driving teams of Kris Meeke (GB)/Paul Nagle (IR) and Dani Sordo (ES)/Carlos del Barrio (ES) are keen to follow in the footsteps of the “Three Musketeers”. 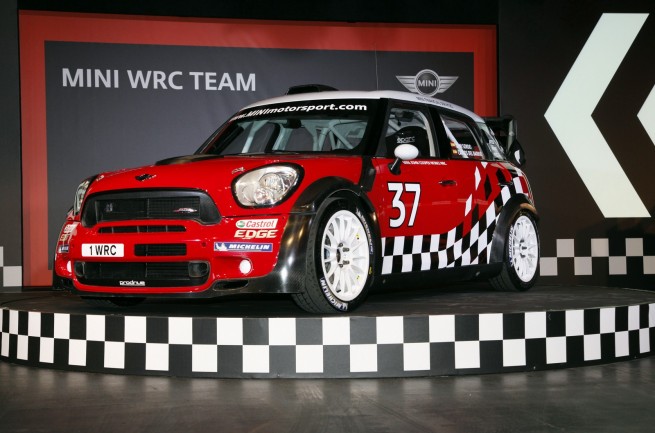 At the launch in the “T Building” of the MINI Plant in Oxford, the spotlight was initially on Hopkirk and Aaltonen as they drove onto the stage behind the wheel of the legendary Classic Mini Cooper S. The guests and media representatives were then treated to their first look at the MINI John Cooper Works WRC in its final World Championship design. The car was developed by Prodrive, based on the MINI Countryman production model.

“On the one hand, MINI can look back on a unique success story,” said Ian Robertson, Member of the Board of Management of the BMW AG for Sales and Marketing. “On the other hand, MINI is the epitome of excitement for millions of fans around the world and thrills them with its energy. This is precisely what we are able to authentically represent through our motorsport involvement in the World Rally Championship. Thrilling rally events, ultimate performances by man and machine, and as much success as possible, of course: motorsport is pure emotion – just as MINI is for its fans.” 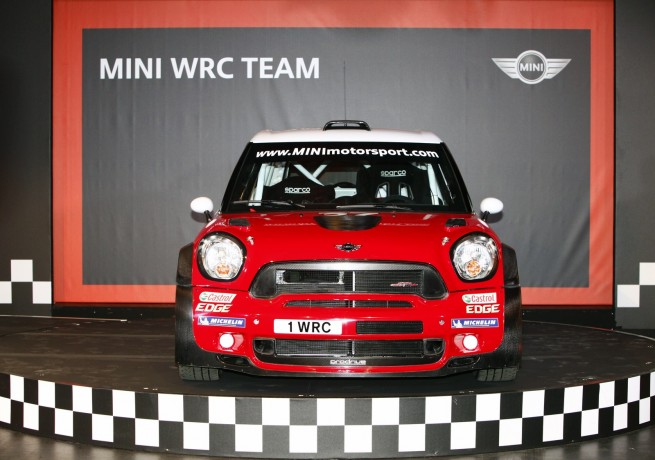 David Richards, Chairman and Chief Executive, Prodrive Group, is also looking forward to the first rally for the new MINI John Cooper Works WRC. He said: “We have been working towards this moment for more than two years and it is truly exciting to be launching the MINI WRC Team and what I believe is the most stunning car in World Rallying, the MINI John Cooper Works WRC. We have an experienced team, a talented driver pairing and, most importantly of all, a strong partnership with MINI. We are now eagerly looking forward to demonstrating the performance of the car on its debut in Sardinia in just a few weeks.”

“The excitement of everyone involved in the comeback of MINI to the rally stage is building with every day we get closer to our maiden rally appearance,” added Dirk Hollweg, Head of MINI Motorsport. “With the MINI WRC Team we not only want to please the loyal fans of the MINI brand, but also aim to address new motorsport enthusiasts. We want to thrill them with fascinating pictures, technical know-how and pure performance. In addition, the special MINI lifestyle is always part of the equation. For us, it’s always about a bit more than just motorsport. I think the rally fans will love it.” 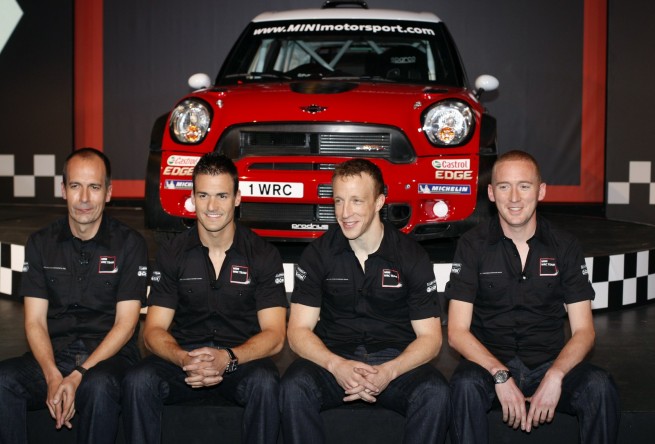 David Wilcock, Technical Director of the MINI WRC Team, presented the guests with the most important details of the MINI John Cooper Works WRC and said: “This Team Launch is really perfectly timed for us. We look back at some extremely demanding and busy months. Now we are entering the crucial phase of our preparation programme for the first rally. We started the development of the MINI John Cooper Works WRC early. It was important to make sure the ratio between development and actual building of the car was right. Our goal was to maximise every area of performance we could get from the technical regulations. Our first rally appearances will show how well we achieved this. In any case I can say that the partnership between MINI, Prodrive and BMW Motorsport on the engine side is running exceptionally well, everyone is contributing to the project with a lot of enthusiasm.”

Having already completed several thousand kilometres of tests behind the wheel of the MINI John Cooper Works WRC, drivers Kris Meeke and Dani Sordo can hardly wait to finally compete in the first rally for the MINI WRC Team. “This launch is the next milestone on the long way to our first rally,” said Meeke following the presentation of the car. “I cannot wait to get the season started. It’s nice for everyone in the team to see the result of their work presented in such a spectacular way. The heritage of MINI in motorsport is fantastic. Now we want to make sure we play our part in adding some more chapters to the success story.” 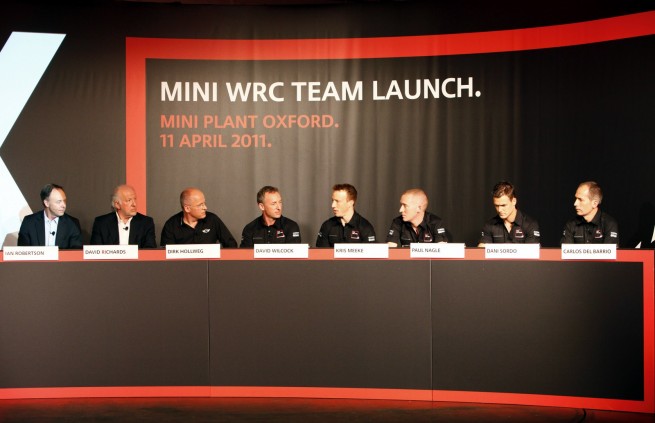 Sordo is also highly motivated ahead of his sixth season in the World Rally Championship. “It’s about time we get the ball rolling,” said the 2005 Junior World Rally Champion. “The break since my last rally has been long enough, now we want to show how good we are. Everything is new for me this year. Bearing this in mind, the additional time to get accustomed to my new environment has definitely been helpful. Now I’m really looking forward to the new challenge and to fight for strong results with the MINI John Cooper Works WRC.”

The MINI John Cooper Works WRC is powered by a 1.6-litre turbo engine also used in MINI production cars, which was developed by BMW Motorsport for use in series complying with FIA Super 2000 regulations, including the World Touring Car Championship. As well as being responsible for the works team’s MINI John Cooper Works WRC cars, Prodrive also supplies customer cars to teams lining up in the World Rally Championship. This applies to the WRC and S2000 versions of the new rally MINI.

Over the course of the afternoon, Meeke and Sordo will complete a number of demonstration runs on a specially set out track at the MINI Plant in Oxford. The MINI WRC Team will then close the event with a party under the motto “The Comeback”.