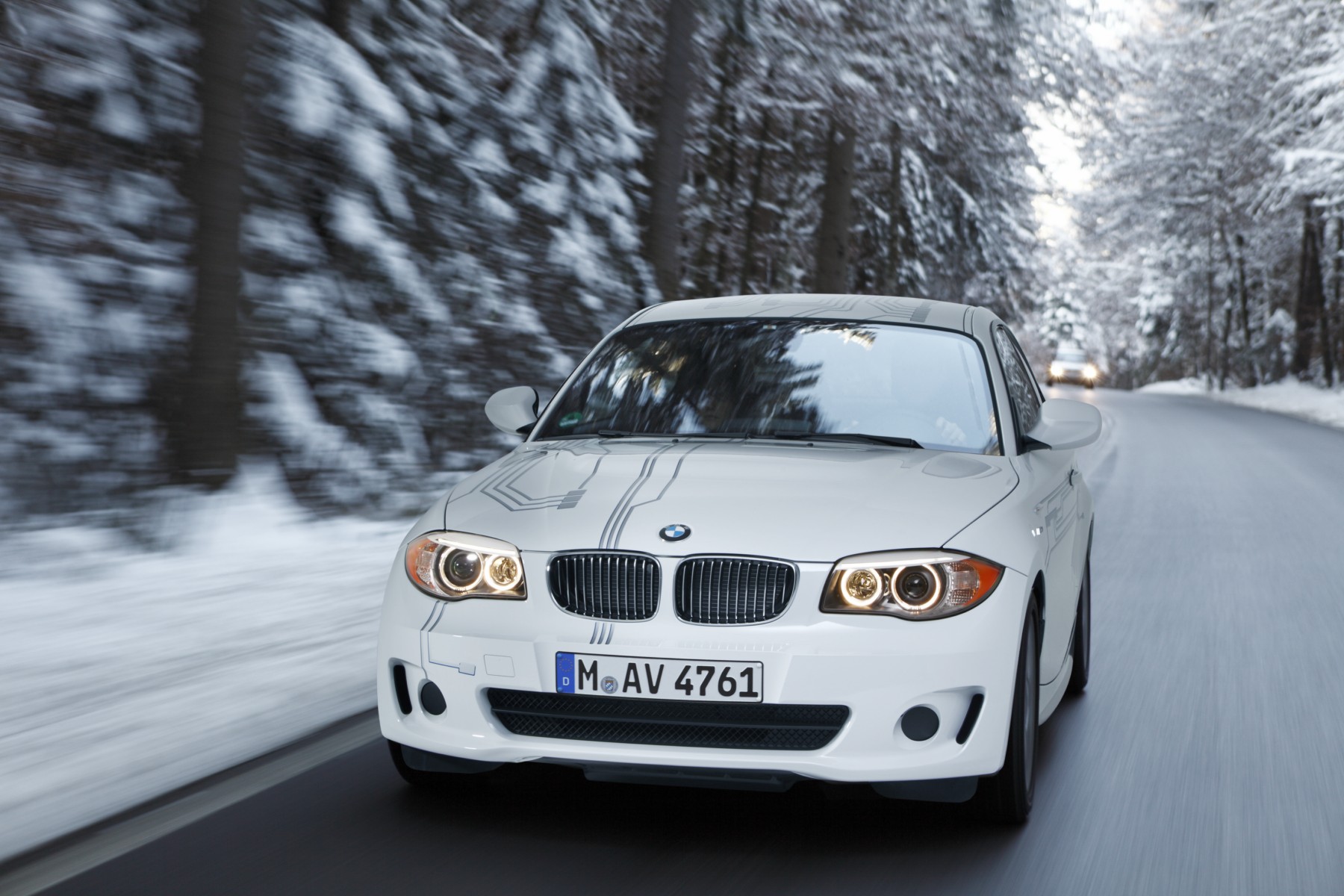 With the world premiere of the BMW Concept ActiveE at the beginning of 2010, just a year after presenting the MINI E, the BMW Group underscored the rapid and consistent continuation of its intensive research and
development activities in the field of electric mobility. This concept has now become perceptible and tangible reality in the form of the BMW ActiveE.

project i – research and development of tomorrow’s mobility.

The BMW ActiveE is the BMW Group’s next systematic step towards an emission-free, mass-produced electric vehicle. Within the framework of project i, the BMW Group is carrying out research and development work on
the realisation of electrically powered vehicles. The main focus is on the concept of a Megacity Vehicle (MCV) that meets the demands of a sustainable mobility solution for congested urban areas. For this purpose, the
BMW Group is conducting field tests on an internationally unparalleled scale for the use of purely electrically driven vehicles in everyday road traffic. 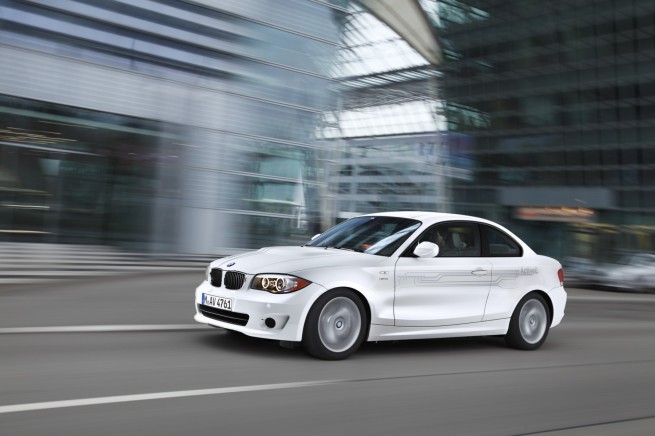 Ongoing field tests in the USA and Europe involving more than 600 MINI E cars are already providing vital knowledge about the demands on future electrically powered production vehicles. Starting in 2011 in the USA, Europe and China, a test fleet of over 1000 BMW ActiveE vehicles, produced at the Leipzig plant, will provide further valuable insights into the everyday use of the vehicle. The findings will serve to deepen the knowledge already gained on the everyday use of electric vehicles and to learn more about customer requirements. The feedback from customers testing the MINI E and the BMW ActiveE will be fed directly into series production of the MCV, which the BMW Group will be launching under a new sub-brand in 2013.

With the BMW ActiveE, the BMW Group is extending field tests on electric mobility with a clear perspective of series-production capability and is intensifying research into electric mobility in everyday road traffic. For this
reason, the drive components and energy storage units that will be used in the MCV are being tested on the BMW ActiveE at a pre-production stage. 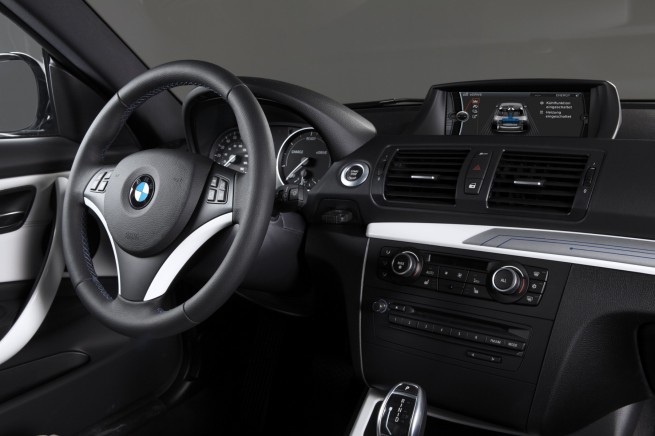 The knowledge gained will be fed directly into series development of the MCV. With the BMW ActiveE, the future of individual mobility combining driving pleasure with CO2-free driving is one step closer.

On the way to sustainable, CO2-free mobility, the BMW Group now presents the next major milestone – the BMW ActiveE. Following the MINI E, the BMW ActiveE is the BMW Group’s second electric prototype. With a power output of 125 kW/170 bhp and maximum torque of 250 Nm, the car accelerates from 0 to 100 km/h in 9 seconds, demonstrating the dynamic and agile characteristics of a BMW, and as is typical of electric vehicles, straight from a standstill. At the same time, newly conceived lithium-ion energy storage units facilitate a vehicle range of around 160 kilometres (100 miles) in everyday operation.

Just like the MINI E, the BMW ActiveE is a conversion car, an electric vehicle based on the body shell of a vehicle with a combustion engine. The BMW ActiveE integrates all electric drive components such as energy storage unit, electric motor and power electronics in a vehicle body that was not originally intended for this purpose – and without compromising on space or comfort in the interior. Therefore, the BMW ActiveE is the BMW Group’s first electric vehicle to offer four fully-fledged seats and a 200-litre luggage compartment. This achievement by BMW developers is even more impressive in terms of the vehicle’s role during the initial testing phase.

The BMW ActiveE incorporates a pilot series version of the drive train and energy storage unit from the MCV with a partly identical, partly similar geometry in a vehicle from a different concept so that these components may undergo preliminary testing. However, except for a small scoop in the bonnet and a smaller boot, the exterior and the interior design is virtually the same as that of the series production vehicle.

The BMW ActiveE is equipped with three large energy storage units that are positioned in the area where the engine block, power transmission to the rear wheels and the tank are to be found in a vehicle with a combustion engine.

The drive train of the BMW ActiveE – i.e. the electric motor with gear and power electronics – directly on the rear axle in order to save space. Thanks to this measure, the BMW ActiveE corresponds to a conventional
BMW 1 Series Coupe with regard to available interior space. Driver and front-seat passenger as well as passengers at the rear have the same amount of space at their disposal as in the BMW 1 Series Coupe and do not have to suffer any disadvantages at all with regard to headroom, legroom or shoulder room. This is due to the ideal positioning of the power electronics, which are located for functional reasons above the rear-axle mounted electric motor.

With a volume of 200 litres, the boot offers sufficient space for bottle crates or two 46-inch golf bags. 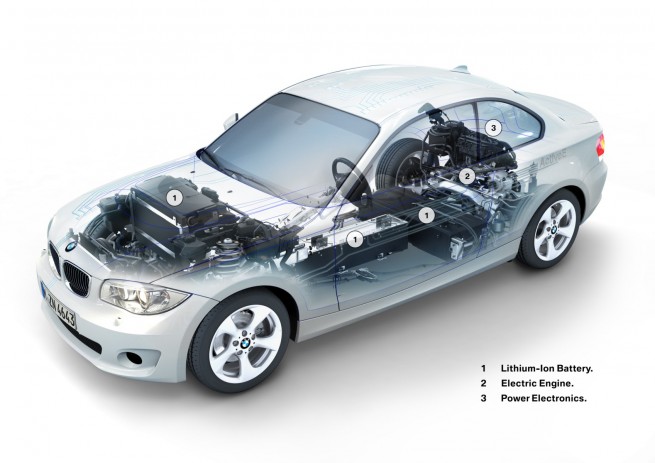 Within the framework of the conversion of the BMW 1 Series Coupe into the BMW ActiveE, 350 newly developed body components, which are invisible to the observer, ensure that the car fulfils the same high standards with regard to crash safety, construction space and comfort as the original vehicle with a combustion engine. One of the major challenges in this respect was the intelligent integration of the energy storage units and drive components into the space made available due to the omission of combustion engine
components. At the same time, it was necessary to ensure that the three arge energy storage units located at the front end as well as the tunnel and tank could not be damaged or destroyed.

The front end: crash structure and energy storage units instead of a
combustion engine.

In order to achieve the best possible range, the BMW ActiveE is the first limited production electric vehicle in which part of the high voltage storage units is integrated into the front end of the vehicle at the cowl. There, one of the three energy storage units of the BMW ActiveE takes up around half of the construction space normally occupied by the combustion engine.

Extensive measures implemented in this area guarantee optimal passenger safety in the event of a crash and also ensure that the high-voltage storage unit, ancillary components and battery fluid containers remain undamaged.

Hence the BMW ActiveE meets the same high safety standards as a BMW 1 Series with combustion engine, fulfilling not only crash safety requirements stipulated by the government, but also the stringent BMW
corporate demands on passive safety, some of which are even higher than those required by law. 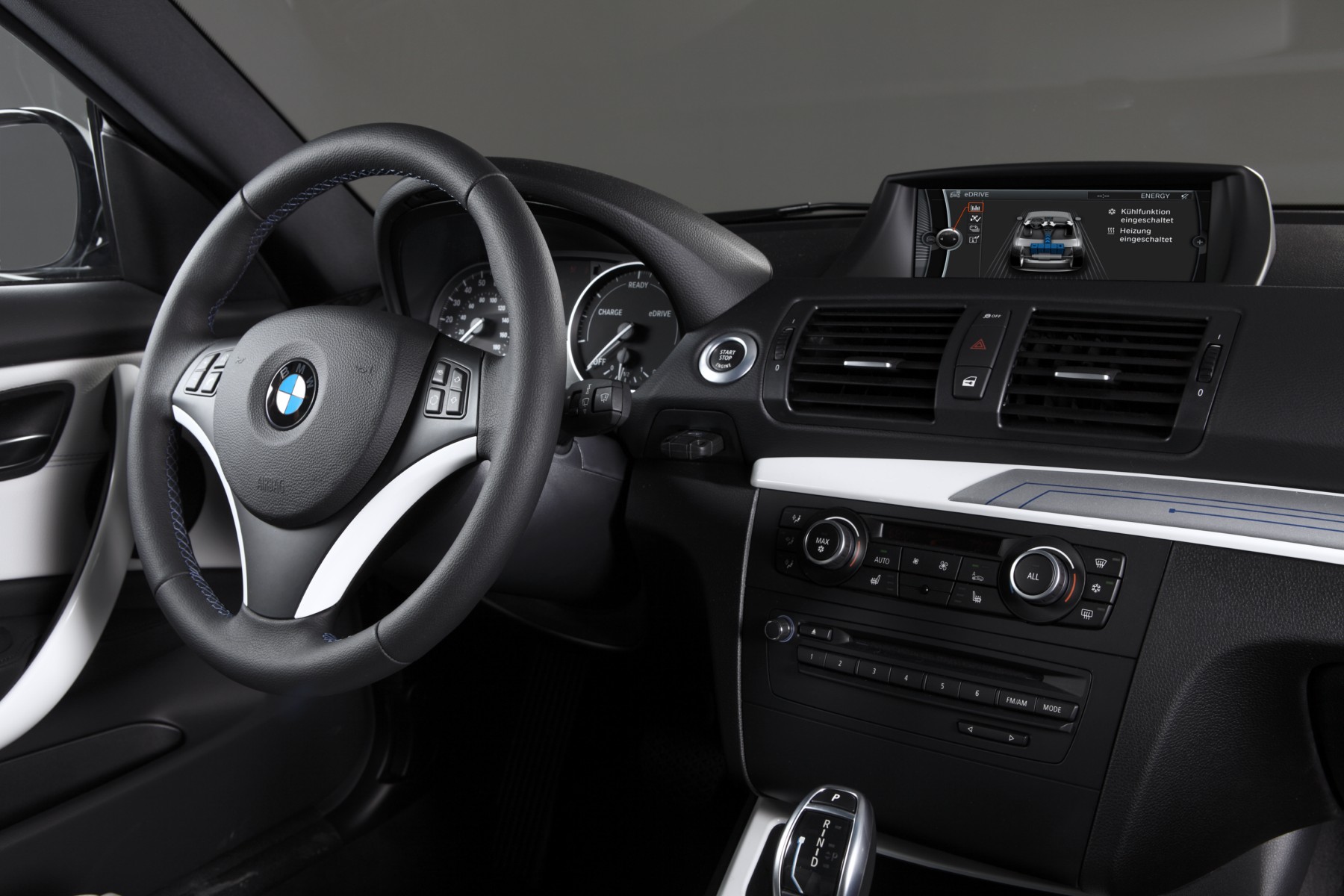 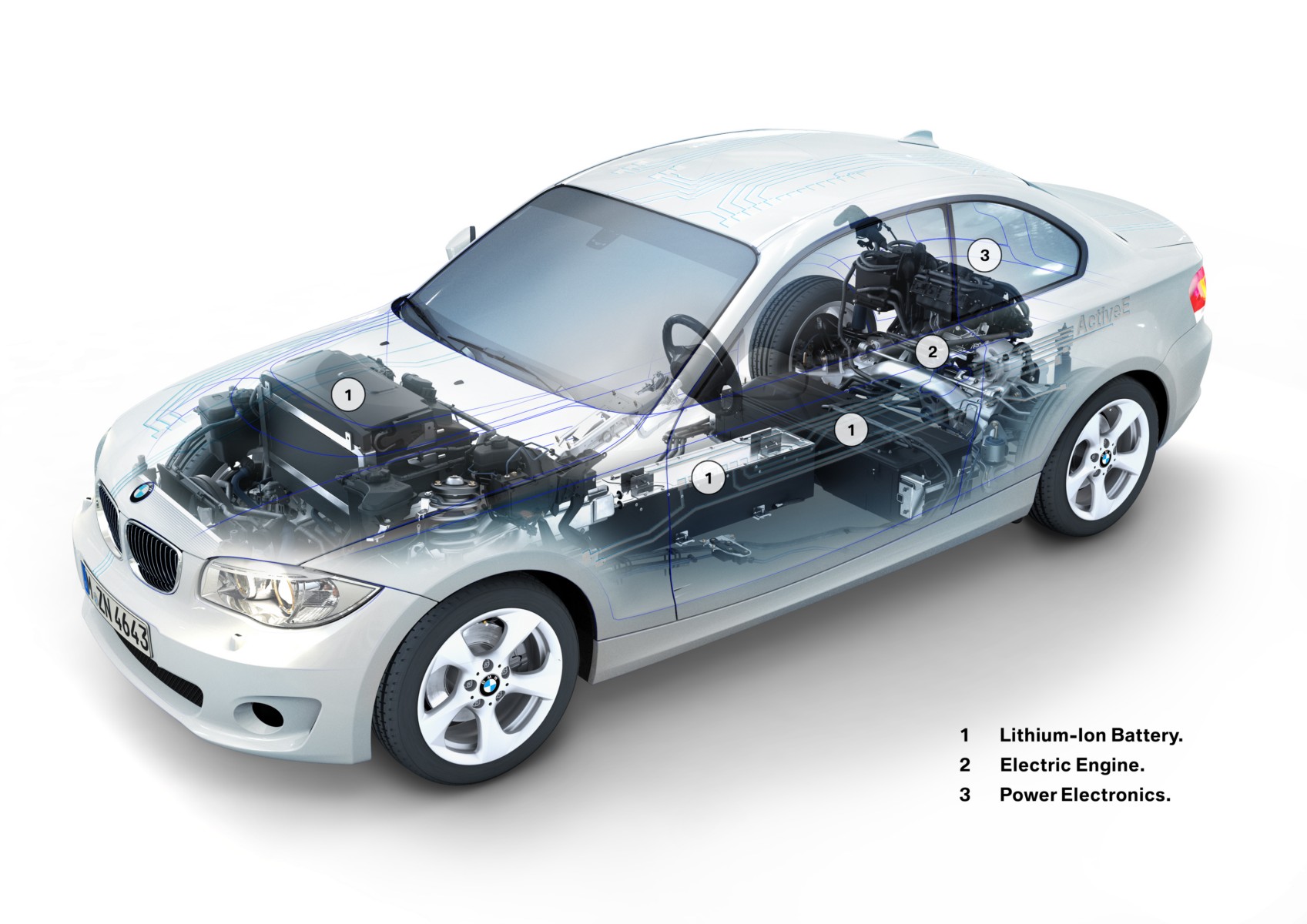 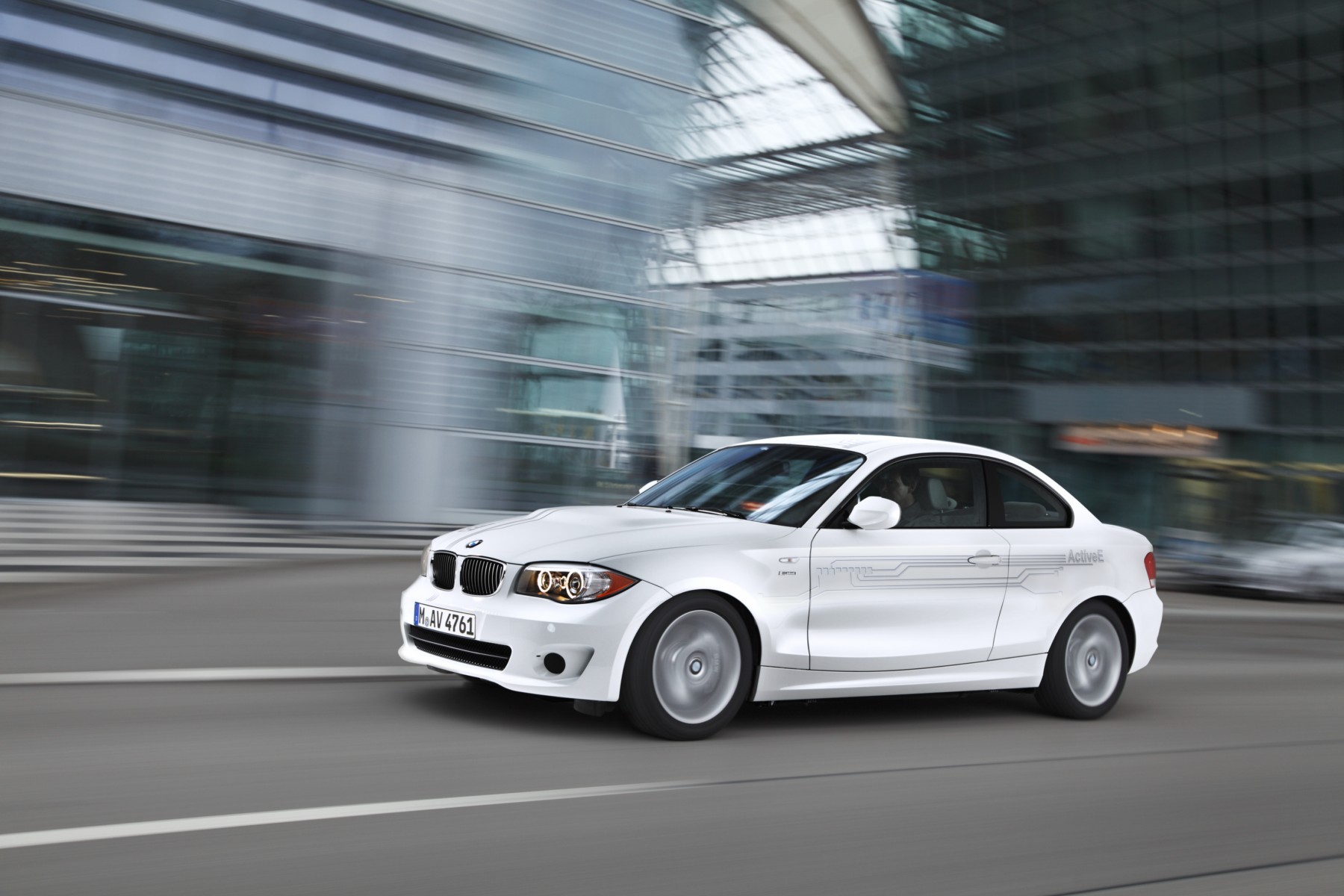 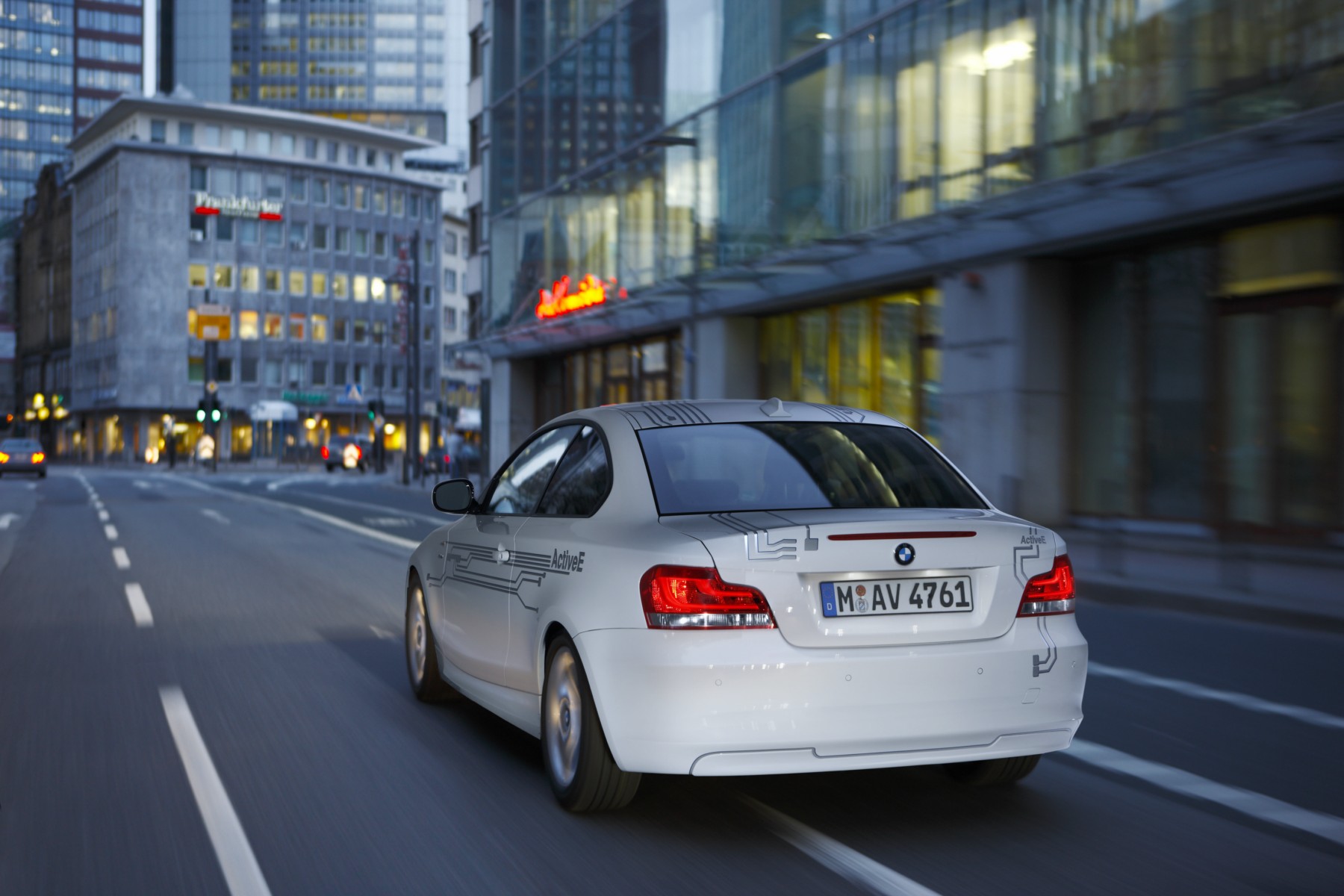 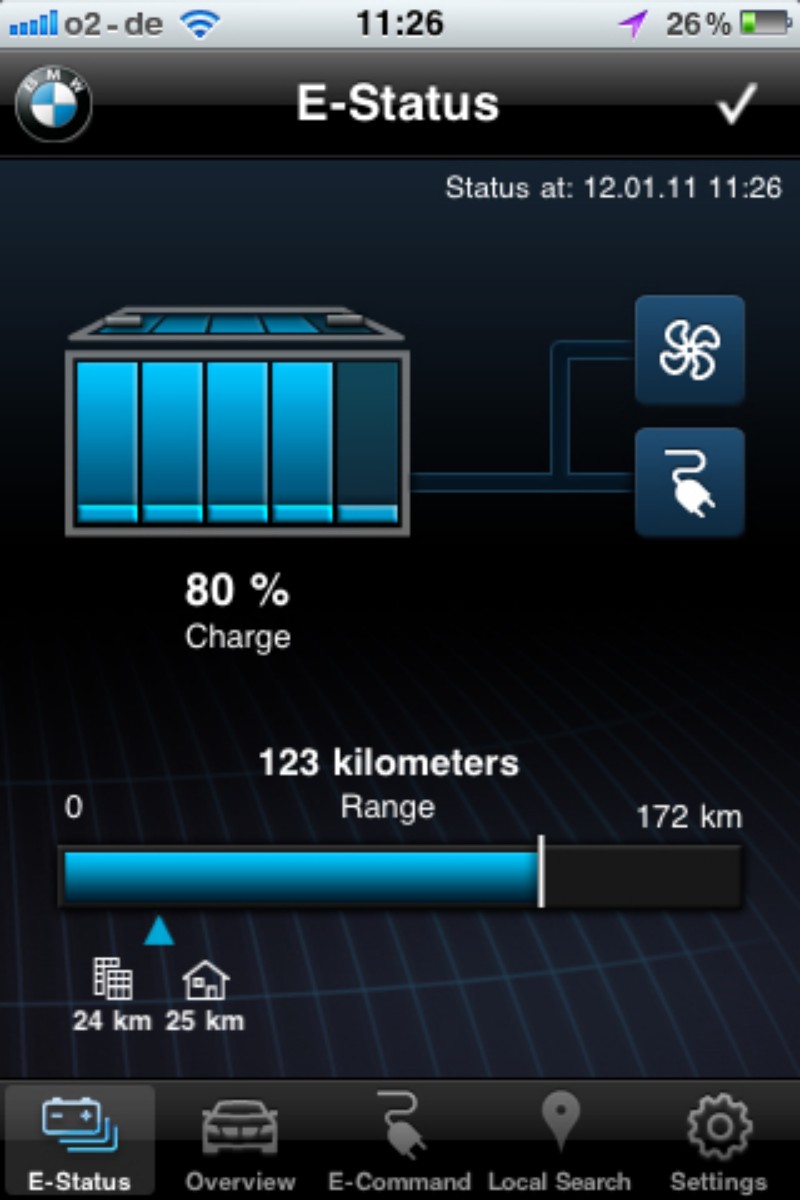 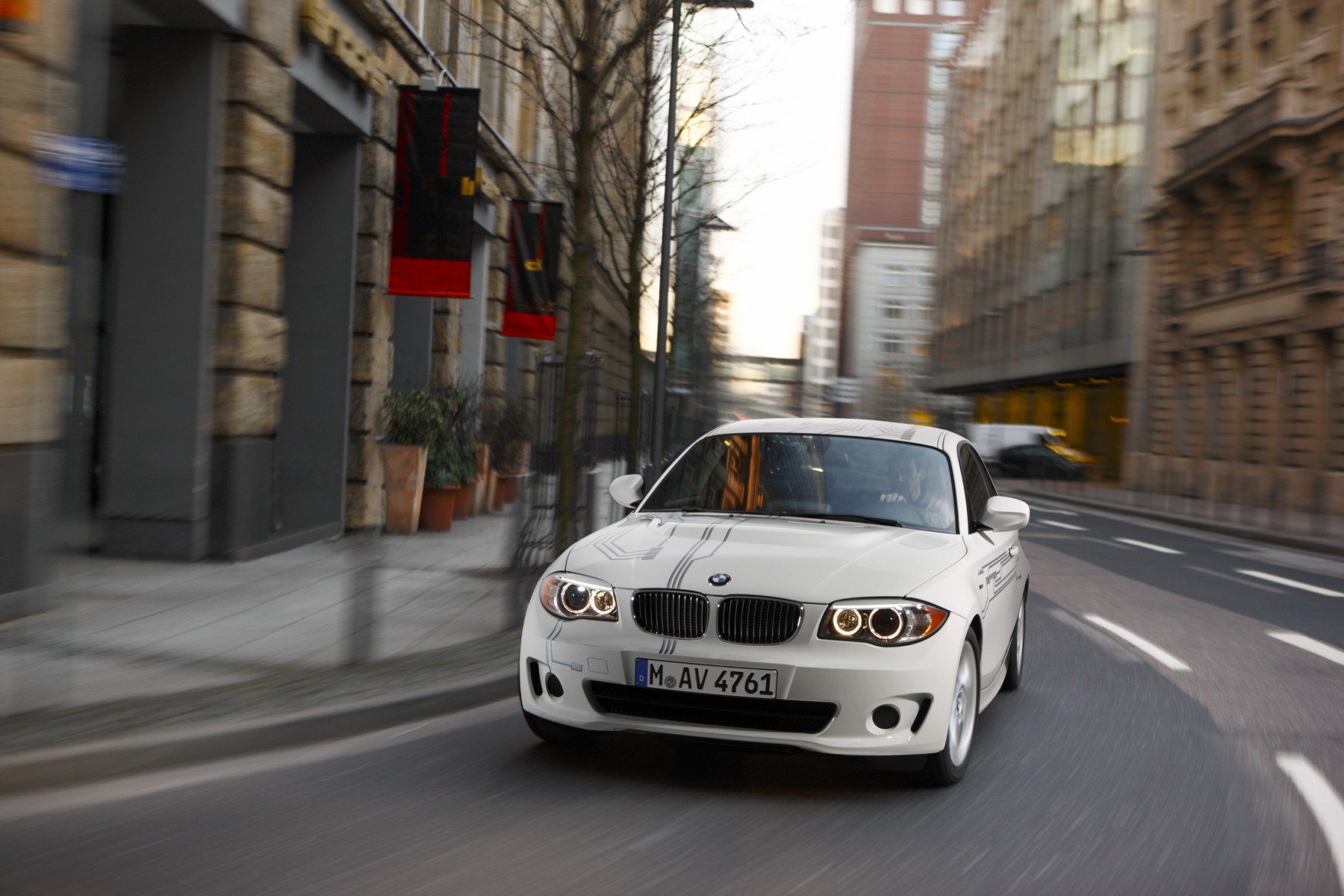 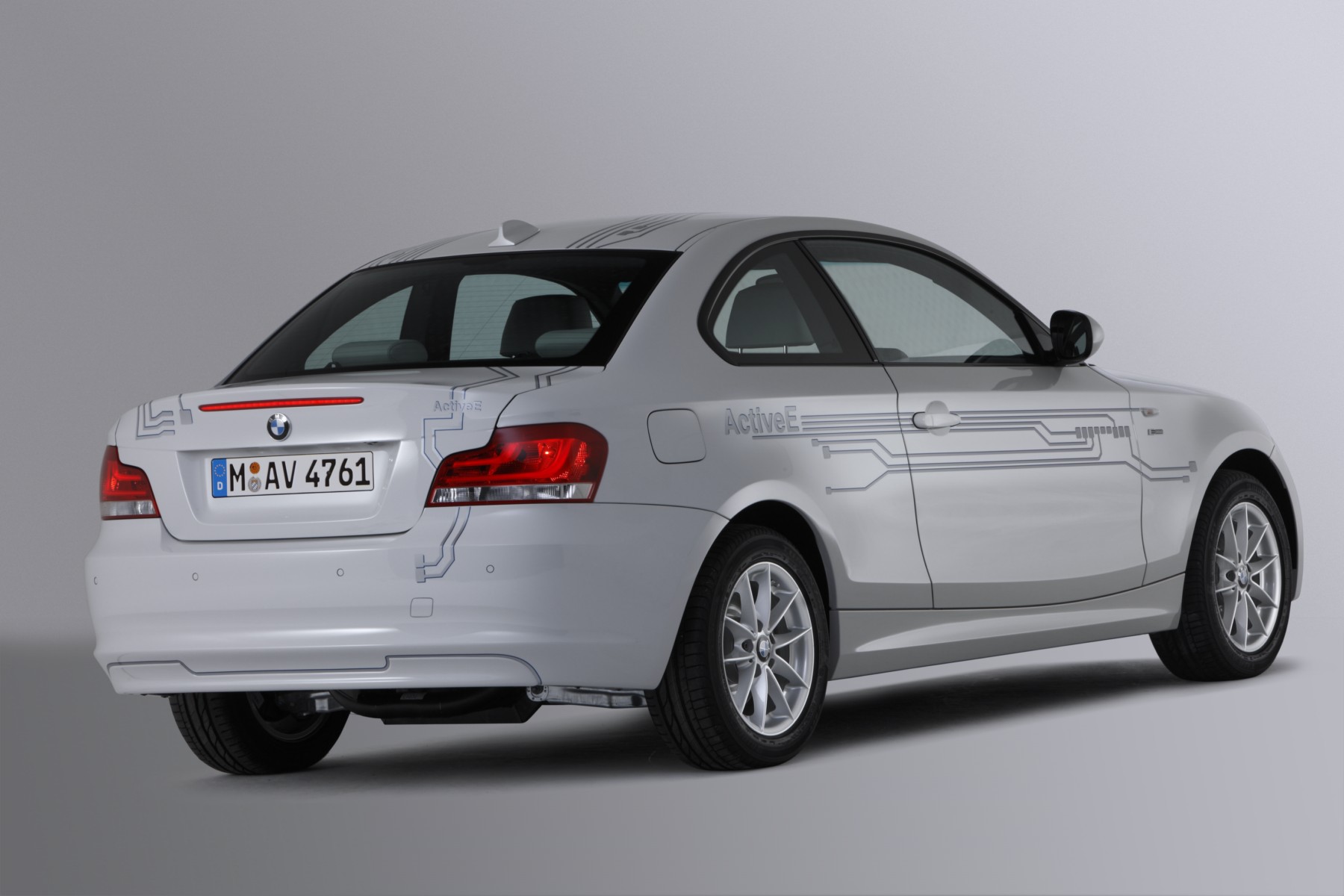 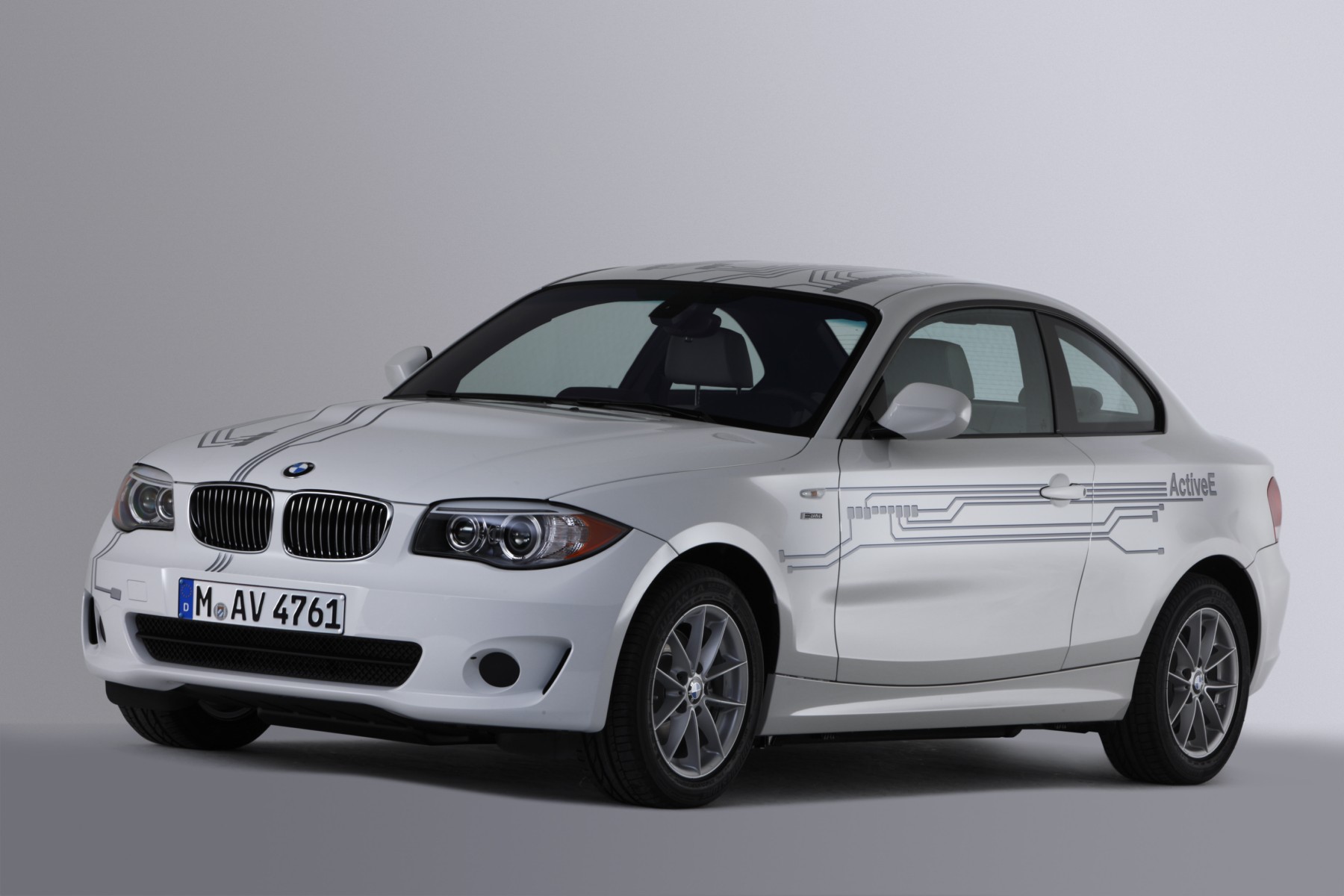