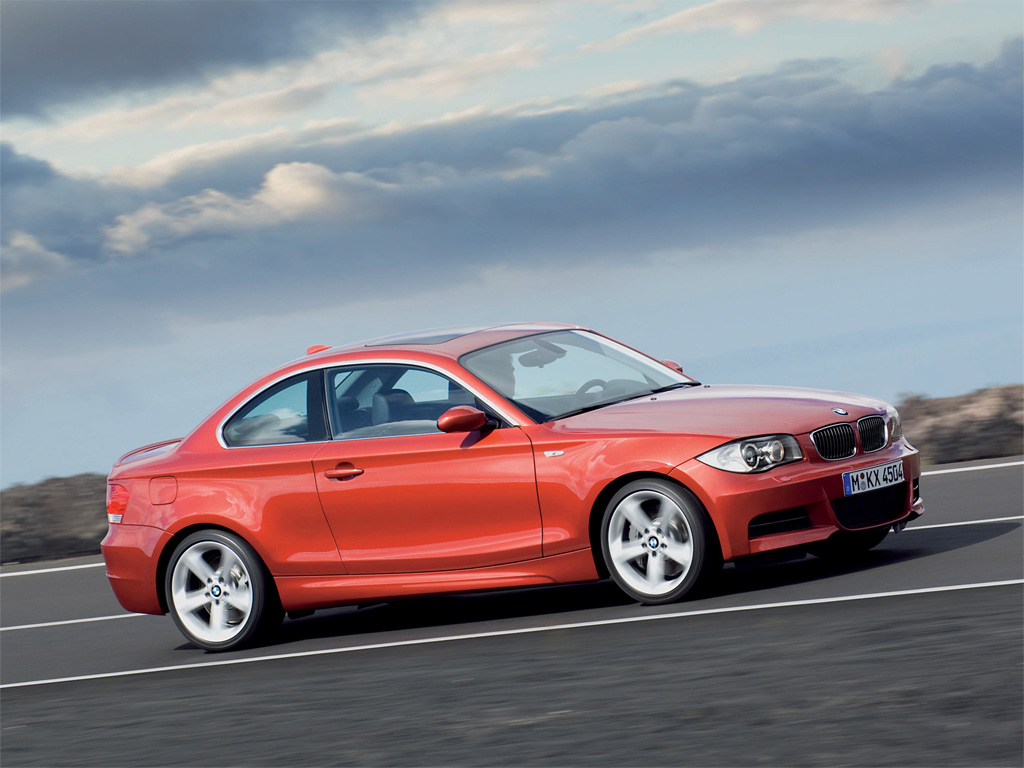 As luck would have it, a member of the gang I belong to phoned me late Thursday afternoon asking for a favor. He’d recently been in a bike accident and he needed to move his DeTomaso Pantera from a downtown Kansas City facility to his home. With one arm out of commission, he couldn’t do it himself and his wife didn’t want to (more on why later).

I tried to curb my enthusiasm. The Pantera is a car that most men my age lusted over in high school. (In fact DeTomaso built Panteras from 1971 through 1991.) While not at the status level of a Ferrari, us mid-westerners with our Detroit iron bias really loved the notion of this sleek, sexy Italian job with a 351 Cleveland thrumming away behind your head.

And if you don’t know why a 351 Cleveland is significant, you’ll need a little Ford history lesson. The 351 was available in two guises, one engine was manufactured in the Cleveland, Ohio plant, the other was manufactured in Windsor, Ontario. Besides the short blocks being completely different, the 351W had asthmatic cylinder heads, the 351C didn’t.

One quick way to tell if you had a Cleveland block was the spark plugs, if they were the odd-sized 14mm plugs you had the good stuff under your hood. And that was the engine DeTomaso stuffed in the boot of the Pantera.

In 1971 the 351C in the Pantera was producing roughly 330 HP in a car that weighed approximately 3,100 pounds. Hmmm, those numbers seem to be familiar. The 135i is conservatively rated at 306 HP and weighs around 3,400 pounds. So how far off is the performance of these two cars? Well, number wise they’re pretty close. The ’71 Pantera was advertised as being able to do 0-60 in about 5.5 seconds, the 135i in a couple of tenths quicker. Braking is pretty much equal too, though the Pantera
suffers from small wheels.

But there are 36 years of innovation separating the Pantera and the 135i. And that is telling as soon as you put in a few miles behind the wheel of the Pantera.

Exiting the downtown garage, I pulled to the far right on a side street and put on the emergency flashers waiting for my friend’s wife to lead the way in the 135i. Getting it out of the garage driveway required a couple of boards to drive over to keep the nose from scraping on the curbing. 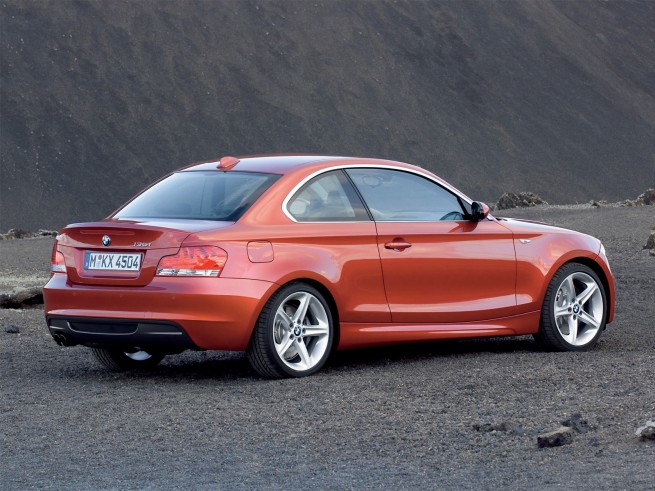 The Pantera uses rack and pinion steering, but without power assist. At low speeds you reach over, grab a hunk of the steering wheel, and muscle it in the direction you want to go. It helps if there’s a little motion to ease the effort. But the Pantera’s clutch is a bit stiff and to keep from stalling you have to use a deft right foot to input throttle. The big V8 has a good gob of torque right off idle, not unlike the N54B30 BMW motor. It could get away from you, expensively, if you’re not paying close attention.

And that’s when I noticed the other important aspect of the Pantera. It is a head turner, still. A couple of dudes in a late model Impala moved around me while waiting to get underway. They pulled diagonally in front of the car and the passenger rolled the window down and took a few pix. If you crave attention . . .

A few blocks later and we hit the freeway. This particular Pantera has a five speed manual with the second gear synchros missing in action. Up
shifts are from first to third, or double clutch up from first to second. I’ve been double de-clutching forever, so that wasn’t an issue (I owned a Fiat 128 and the synchros for its transmission disintegrated on the boat coming over). The Pantera uses a gated shifter with first being in the racing pattern, down and to the left. The second to third and fourth to fifth shifts are straight back. The gear lever is connected to the rear mounted gearbox (behind the engine and differential) using rods instead of cables, and the linkage was good and tight in this example. It was a pleasant shifter to use, it felt very good in hand.

Once at highway speeds, the steering was quite livable, though it was a bit vague on-center. The steering ratio is fairly quick. It reminded me of the 135i’s at speed. Where the Pantera felt very different was when accelerating. The 135i undergoes a pretty dramatic weight shift front to rear in initial acceleration. The Pantera already has all it’s weight on the rear axle (or a very large chunk of it at least) and it just flat-out scoots.

But there was a problem while on the highway. Visibility is a bit constrained in the car (although the interior rear view mirror actually gives a pretty good picture of what you’re leaving behind). There is no passenger side exterior mirror. A rather tall SUV was in close formation in the right lane for a long time. It seemed to be hanging right on the Pantera’s passenger side door. I had to duck my head down a bit to see what the driver was doing, and she’s got a big grin on her face, looking right at me and waving frantically. Well, I remembered something I’d been taught in a driver’s school, you tend to go in the direction you are looking. And this gal was looking right at my passenger seat! It was time to see how well the big lump V8 could get me away. I can report that it’s effective.

But the Pantera has no nannies, and it’s a short wheelbase mid-engined car. It can get away from a careless driver in a heartbeat, and when a mid-engined car lets go, it usually is gone (beyond recovery). In the rain this car could be a couple of handfuls and a half.

Trying to maintain formation with the 135i, I found that rather than applying the brakes to scrub speed, you shut the throttle by lifting completely off the gas and then the engine braking felt like tossing an anchor over the side. That big V8 with the 4 bbl carb and high compression sure does have a lot of pumping losses. And here’s another point of comparison, with the Pantera you can expect high teens MPG on the highway. And given the weight of the controls, you’d be a fool to drive it regularly in the city.

Once we arrived at our destination, I had a chance to explore the interior a bit. To say the least, the term ‘ergonomics’ was not in vogue in the ’70s. The bulk of the gauges are in the center stack. The turn signal stalk is a bit far from the steering wheel and the horn button is on the turn signal stalk. Switches are period correct rockers, with the radiator fan at the bottom left of the center stack. The steering wheel obliterates the view of all speeds below about 120 mph and all engine revs above about 4500 RPM (and here’s where you should say, so what’s the problem?).

But the most exasperating aspect of the Pantera is the placement of the driver’s foot well. Thanks to the rather short 98.4 inch wheelbase and mid-engined layout, the front wheel wells intrude on the interior space. That moves the pedals into a rather cramped splayed-right position. You can hook a shoe under the brake pedal when double clutching. There is absolutely nowhere to put your left leg when underway (and you don’t dare rest it on the clutch pedal).

The 1971 DeTomaso Pantera was listed at $9,800, in constant currency that’s about $52,000. The Pantera has no ABS, DSC, DTC, cruise control, airbags, pre-tensioner seat belts, heated seats, bluetooth, or Homelink. It comes with a rudimentary Becker AM/FM stereo radio (mounted vertically on the right side of the center stack) with an optional Becker cassette player – that almost worked straight from the factory.

The Pantera is noisy, rough as a cob, suffers from vague on-center steering, is cramped, has iffy visibility and yet is as much fun as a barrel of monkeys (it’s a bit like being in the barrel with them, though).

My friend’s wife loved chauffeuring him in the 135i. She liked the manual tranny in the 135i and was glad it had power assisted steering, unlike the Pantera (and that was the reason she didn’t want to drive it). And I really enjoyed the opportunity to drive a car I lusted after when I was much younger. But while I absolutely loved the chance to drive the Pantera, I think I’ll keep the BMW 135i. 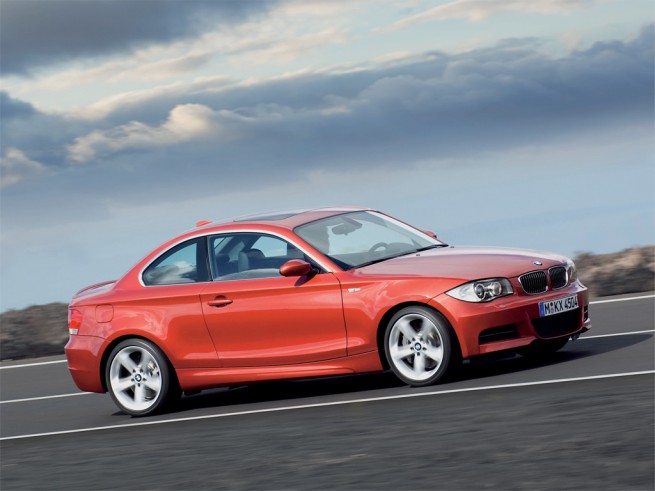