BMW X5 Diesel, one of the cars we have been waiting to drive for quite some time now, an exciting diesel vehicle that many auto publications have been raving about. While we spent some time behind the wheel of a 335d, our mind has been set on the new xDrive diesel and its impressive advertised mileage.

So today, we received our press car in the beautiful, sunny – at least today- Chicago. The X5d will stay with us for a week or so and it will be thoroughly tested, including …….a very long test drive all the way to…..Spartanburg, YES, we are heading down to BMW’s plant in South Carolina. While I can’t reveal all the secrets we have prepared for you next week, I can at least tell you that we will have a full report every few hours while driving to Spartanburg, each review will include photos and our first impressions. Think of this as some BMW X5 diesel blogging episodes…. Bottom line, we will take you with us in this unique trip we have prepared for a while now.

But in the mean time, being excited as always when I get behind a new BMW, I decided to take xDrive diesel for a “spin” and what can be better than testing it first in the always congested Chicago traffic. 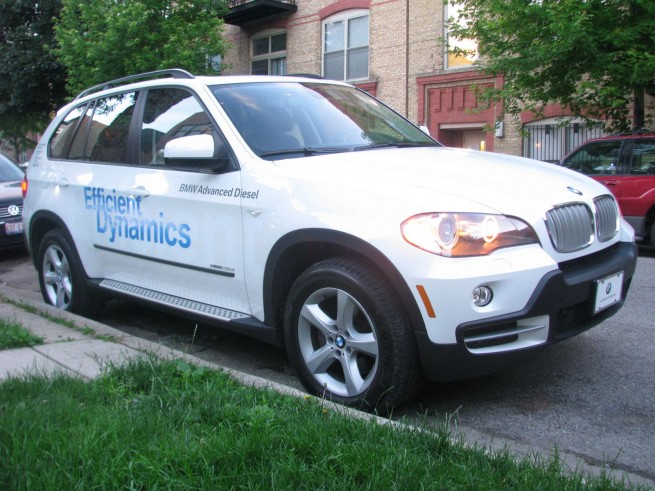 The exterior design has always been one of our favorites among other BMWs, including the older style X5 which fit perfectly in the line-up when it first launched. The white painted xDrive35d sports that aggressive look that makes you fall in love with BMW’s first Sports Activity Vehicle and as crazy as it might sound, it looks quite interesting with the flashy EfficientDynamics marketing painted on the car.

I know in the past many of you had your objections against the BMW diesel engines, especially those of you that live in Europe and are used to seeing them all the time, but for us, the non-diesel trained Americans, those engines are something special. And this twin-turbo 3.0-liter diesel engine with 265 horsepower and a stunning 425 lb-ft of torque at just 1750 rpm, doesn’t disappoint at all.

Coming from a twin-turbo 3.0 liter gasoline engine, I have to admit that it took me a few minutes to get used to it and ignore the slightly louder diesel engine, but after I became comfortable with the car and cruising down the highway at higher speeds, the sound was almost inaudible. I have never really been against the “roaring” sound of BMW engines and to me that’s what makes BMWs even more appealing.

As far as performance, BMW advertises the xDrive35d at 6.7 seconds from 0-to-60 mph and we agree, the car is snappy and once the full torque kicks in, the full turbo experience is  impressive for a 5,111 pounds SAV. The output is sent to the wheels by a six-speed automatic transmission, of course, coupled with the intelligent xDrive system.

After the first thirty minutes of “playtime”, decided to push it a bit harder and of course, 95 mph was just a few seconds away -shhh, no cop was around and it was for a short distance. Even at that higher speed, the X5 diesel dominates the road, very solid, extremely well balanced, but still comfortable.

The purpose of this review is to simply give you my impressions after sitting for the first time behind the wheel of an X5d, so we won’t be going into many other details, our long distance test drive will provide me with more data to analyze and implicitly, a more fair and objective review.

Inside, the typical BMW layout is present with the now classic dashboard and controllers, a simple but elegant design. Since it can’t be “all sugar and honey”, we did find a small quirk that has driven crazy many BMW fans in the past few years: the old style iDrive controller. While no official statement has ever been released, our sources say that all the 2010 X5 models will receive the easier-to-use iDrive units found in the new 3-series and 7-series.

That’s all I have for now, high quality photos, videos and detailed articles will follow in the next days. Stay tuned for some exciting things we have prepared for you.