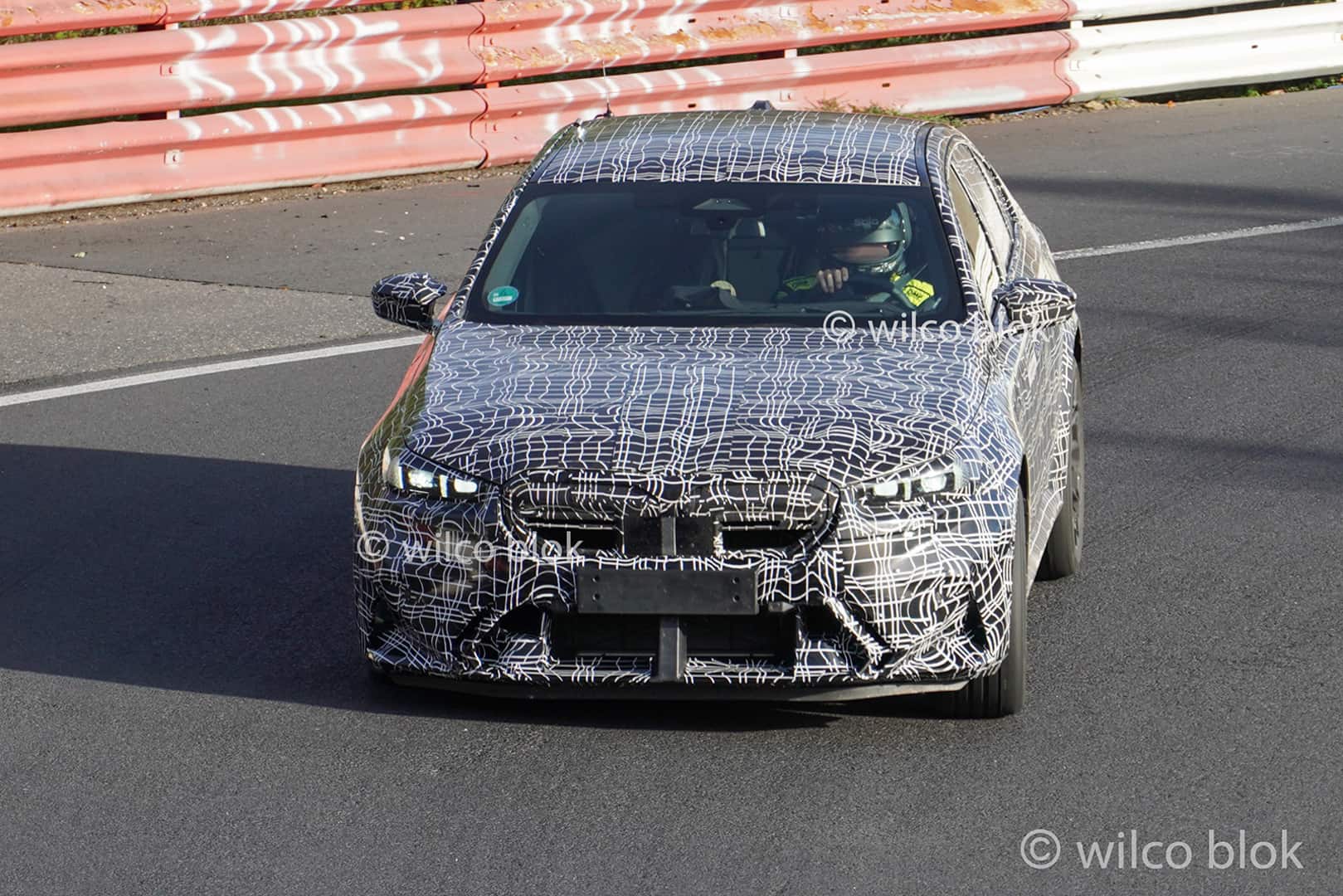 BMW is currently prepping its next-generation M5 for active duty and it’s doing so at its favorite training ground—the Nürburgring. The next-gen BMW M5 might be the first ever hybrid M5 but that doesn’t mean it’s going soft. It’s still going to be a performance monster, which is why the Bavarians are testing its mettle at the ‘Ring.

In these new spy photos, you can see the new G90 M5 doing some hot laps and, despite its heavy camouflage, you can see a bit of its design. For instance, up front, you can see a lot of its new grille design. The entire shape and outline of the kidney grille is visible through the camo, showing off a much smaller, simpler grille style than other modern BMWs. The inserts are also different now, with simple horizontal bars inside, which create more negative space that will provide more airflow but also gobs of radiator-busting rocks.

The lower front bumper is also on display, with new air intakes. The center two intakes are massive, while there are smaller, seemingly brake cooling ducts flanking the sides. You can also see the flared front wheel arches, an M Division design staple. Although, this M5 will feature subtler arches than some other M cars, similar to the previous F90-gen M5. The rears barely look flared at all.

Out back, you can see the M5’s quad exhausts, another M Division design staple. So even though it’s a plug-in hybrid, it will still have shouty exhausts to remind everyone of its power.

And power it will have. The 2024 BMW M5 will get a hybrid V8 powertrain, packing the brand’s new S68 engine and at least one electric motor. The combined power output will be around 650 horsepower. It’s the same hybrid V8 setup as the BMW XM, which makes 644 horsepower and 590 lb-ft of torque. The BMW XM will have more powerful versions, some with up to 750 horsepower, so it will be interesting to see if the M5 will get more potent versions as well.

Of course, the next M5 will be all-wheel drive. With all of that hybrid battery tech and running gear, the G90 M5 will easily be the heaviest M5 of all time. However, it will also be the most powerful and it should be the fastest. And, thankfully, it should still be a handsome, smart looking car, if these new spy photos are anything to go by.