Most of the videos we’ve seen so far with the 2023 BMW 3 Series LCI have been with the M340i (and the M3 Touring), but today we’re sharing a clip that focuses more on fuel efficiency rather than outright performance. This 330e wagon plug-in hybrid has arrived at Dutch dealer Severs Breeman with quite a few options ticked when the electrified wagon was ordered months ago.

For starters, it’s wearing a Skyscraper Grey Metallic paint and has the larger 19-inch 791M alloy wheels with a two-tone finish and double-spoke configuration. Those black side mirror caps and the dark kidney grille illustrate the car has some Shadowline upgrades while the panoramic sunroof and M-branded blue brake calipers reinforce this isn’t an entry-level G21. 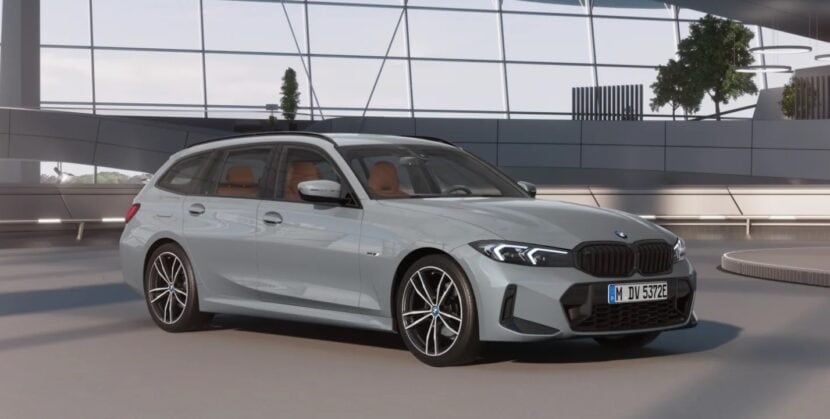 Then we get to the interior where cognac Vernasca leather upholstery proves once again it looks sophisticated on just about any BMW. With the LCI, the lower center console has been slightly modified by getting rid of the bulky gear lever for the automatic transmission to replace it with a much smaller rocker switch.

Of course, the most obvious change is on the dashboard where the Operating System 8 has been integrated on all 3 Series LCI models. There’s a curved glass housing that hosts the 12.3-inch digital instrument cluster and 14.9-inch touchscreen of the infotainment. To make room for the latter, BMW’s interior designers have slimmed down the central air vents. In addition, the once separate physical controls of the climate control have now been integrated into the big display.

The 330e can be had with or without xDrive and this Touring is a rear-wheel-drive affair. It delivers a combined 292 horsepower and 420 Newton-meters (309 pound-feet) of torque from its turbocharged 2.0-liter gasoline engine and electric motor. That gives it enough hybrid punch for a 0 to 62 mph (100 km/h) in a more than decent 5.9 seconds and a top speed of 143 mph (230 km/h).

In electric mode, it maxes out at 87 mph (140 km/h) and covers as much as 38 miles (61 kilometers) in the WLTP cycle without sipping any gasoline.