With the i3 hatchback now discontinued, the iX1 is expected to become BMW’s most popular electric car since it’ll be its most affordable EV. Will it live up to the success of the quirky city car? It’s too early to tell, but it does have some big shoes to fill since the i3 EV and REx generated combined sales of more than 250,000 units. Before its market launch in October, the SUV with no combustion engine is showcased at BMW Welt.

For the time being, the German luxury brand plans to sell the iX1 strictly as the xDrive30 model, meaning all-wheel drive courtesy of dual electric motors – one for each axle. Featured here is the zero-emissions crossover in Mineral White Metallic riding on the BMW Individual Styling 869i wheels. It’s worth pointing out this is the first time the X1 is being offered with wheels as large as 20 inches. Alternatively, you can stick to smaller ones as the base model gets a 17-inch set. 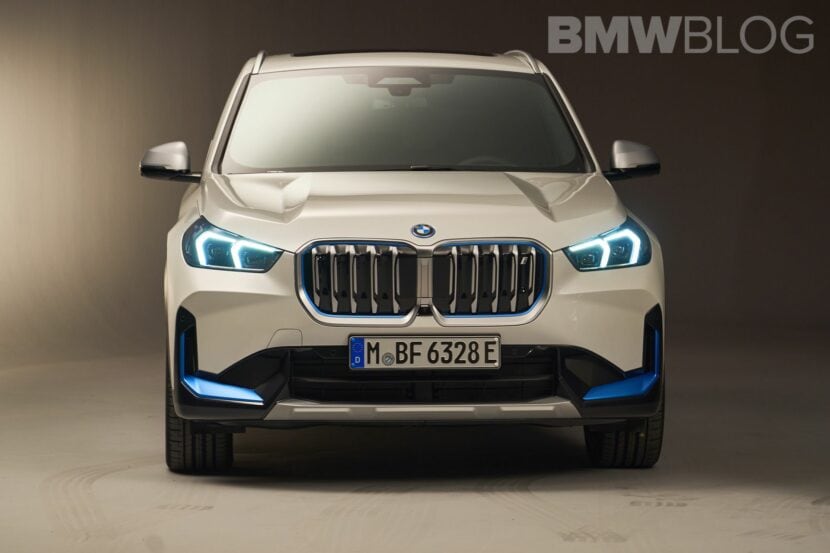 The electric derivative carries the same “U11” codename as the gasoline- and diesel-fueled 2023 X1, which can also be had with a plug-in hybrid powertrain. In typical BMW i fashion, the iX1 gets an assortment of blue accents noticeable around the roundel and for the kidney grille contour, while the bumpers and side skirts have inserts with the same color.

Models exhibited at BMW Welt are typically high-end versions, but this iX1 is not necessarily the most expensive of the lot. It does have the biggest wheels available and the panoramic glass roof, but it’s missing the M Sport Package. That’s because the version in question is a German-market BMW i Blue Elements, which represents a step up from the base model. Alternatively, there’s also the xLine spec for a slightly more rugged look with dark gray body edging, exclusive 18-inch wheels, satin aluminum accents, and silver mirror caps.