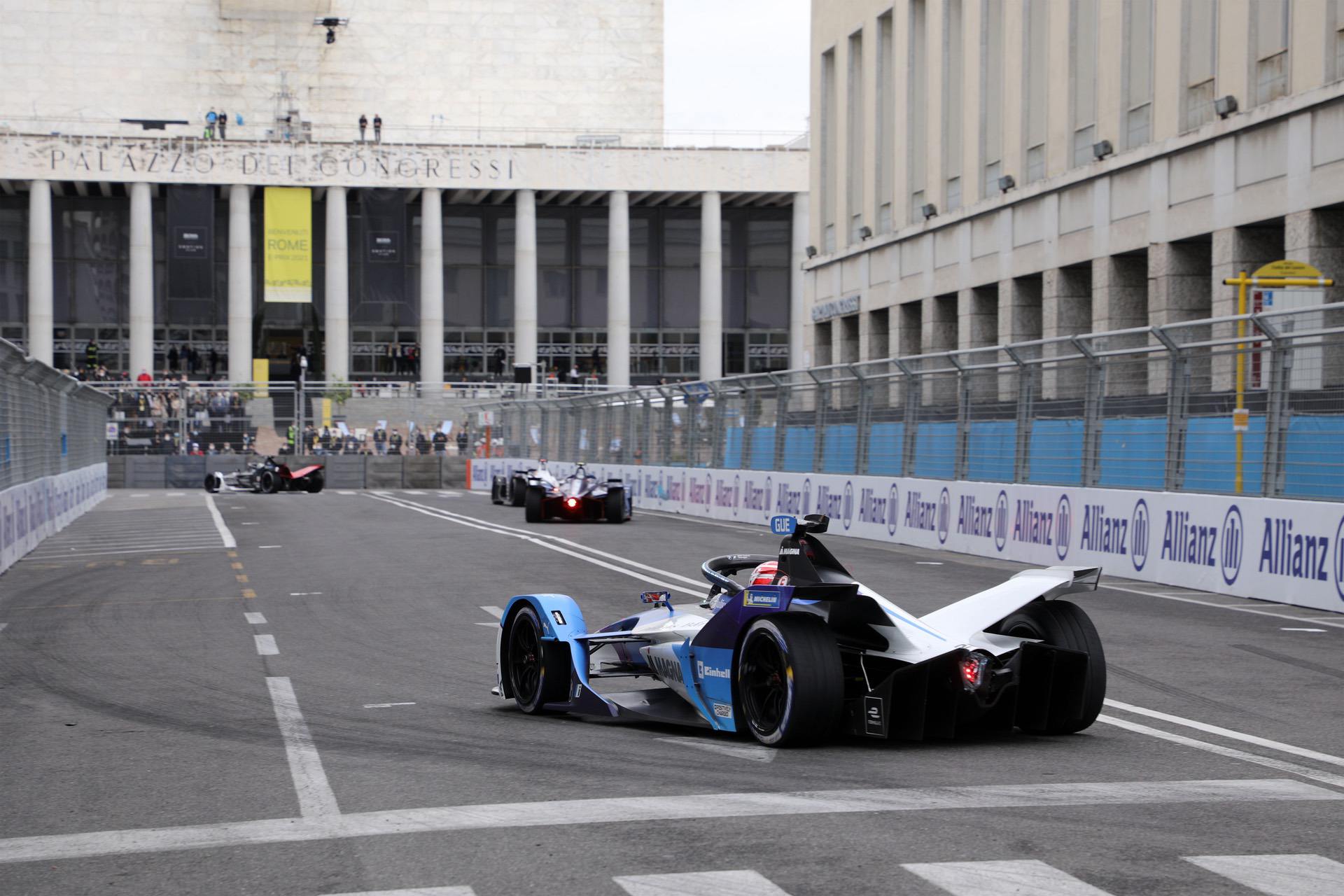 Welcome back to the Rome ePrix race report, as we move on to the second race of the doubleheader. Rome II took place the very next day after Rome I, and it happened that the weather conditions for Rome II were extremely similar to that of the day before, with the difference being even more rain in Qualifying. Unfortunately, a technical issue for Jake Dennis meant that the #27 BMW iFE.21 was unable to take part in Qualifying, relegating Dennis to 23rd on the grid. Maximilian Guenther, on the other hand, did well qualifying from Group 4 to put his #28 car into Super Pole! He would eventually line up 5th on the grid.

As was the case a day ago, the damp conditions prior to the race start made the race directors decide to go with a Safety Car start. This time, the safety car only stayed out for one lap, and the green flag was waved to signify the start of racing with 41 minutes (+1 lap) to go!!

Rookie Nick Cassidy, driving for the Envision Virgin Racing Team, had done a splendid job to take his first-ever pole position. But approaching the first braking zone, he had an issue with the brakes and spun wildly into the runoff area before rejoining the race in 11th. In the meantime, his teammate Robin Frijns appeared to have been caught napping during the Safety Car restart, as there was a huge gap from the 17th-placed car of Nyck de Vries to the 18th-placed car of Frijns. This was very detrimental to drivers behind Frijns, including Dennis.

Another additional challenge this particular race presented was in the area of Attack Mode strategies. In contrast from Race 1, this race required each car to use three Attack Mode activations.

Rookie Norman Nato in his Venturi had inherited the lead from Cassidy when the latter spun, but he was immediately put under pressure by the cars behind him. Porsche’s Pascal Wehrlein and Mercedes’s Stoffel Vandoorne both took the chance to pass the rookie with around 37 minutes (+1 lap) remaining, putting young Nato now in the clutches of Max Guenther, running in 4th. In the meantime, Cassidy was on the recovery, passing several cars and then Nico Muller for 8th. Unfortunately, it was all for nought, as on the very next lap, Nissan’s Oliver Rowland took Attack Mode and attempted an overzealous dive down the inside of Cassidy at the next turn. Cassidy ended up in the wall with a puncture. This, along with an overtaking move on Sergio Sette Camara, promoted Dennis into 20th.

In the next few minutes, it was time for the leaders to take Attack Mode. Guenther had a productive stint in Attack Mode, dropping to 6th upon activating it but making two places up. He managed to sneak past Nato when Rowland barged through, creating an opportunity for Guenther to follow. Then Guenther leveraged the extra Attack Mode power to pass Rowland himself to move back into 4th place. Unfortunately, that would be the end of his progress, because a yellow flag was thrown for a major crash between former champions Sebastien Buemi and Lucas di Grassi. The following full course yellow served to nullify the extra power that Guenther had available.

At 25 minutes (+1 lap) remaining, the race was back under way! Alexander Sims caught Wehrlein unawares at the restart and nipped past the Porsche to claim second place. The Attack Mode activation zone was open, so Guenther went to take Attack Mode for the second time. However, despite passing through both marked sections in the activation zone, Attack Mode failed to register! It was quite a costly error, as this meant that Guenther had lost a lot of time activating Attack Mode without the benefits of actually arming it. On the next lap, he would successfully activate Attack Mode but would drop behind Nato into 5th place in the process. A third Attack Mode activation followed with around 17 minutes (+1 lap) to go, but this time Guenther dropped behind the other Venturi car of Edoardo Mortara, who had taken the initiative and taken Attack Mode early.

In the next four minutes, Guenther would attack Mortara incessantly. But in the end, he was unable to get past the Swiss driver. On the bright side, though, Guenther was doing quite well in energy management at this stage. Teammate Dennis, in the meantime, took his final Attack Mode with 11 minutes (+1 lap) to go, and used it to good advantage in moving up to 18th. From then on, it was all about getting to the finish. The safety car was deployed at 8 minutes (+1 lap) remaining for a Rene Rast crash. Seven minutes later, a one-lap dash for the finish began. Nyck de Vries wiped out Sam Bird in a clumsy accident, but everyone else got to the finish line in one piece. It would be P6 for Guenther, and P16 for Dennis.

After the race, several penalties and disqualifications were handed out. As a result, Guenther and Dennis ended up finishing P5 and P13. A healthy dosage of points for the BMW Andretti team, but unfortunately they still remain at the bottom of the Constructors’ Championship standings, with 12 points. The standings are quite tight, however, and a few great results for the team could see them quickly shoot up in the constructors’ championship. With Guenther and Dennis set to go out in Qualifying Groups 3 and 4 for next weekend’s Valencia ePrix, we could be gearing up for a great showing for the BMW Andretti team.