Check out the Rolls Royce “Spirit of Ecstasy” Fabergé Egg 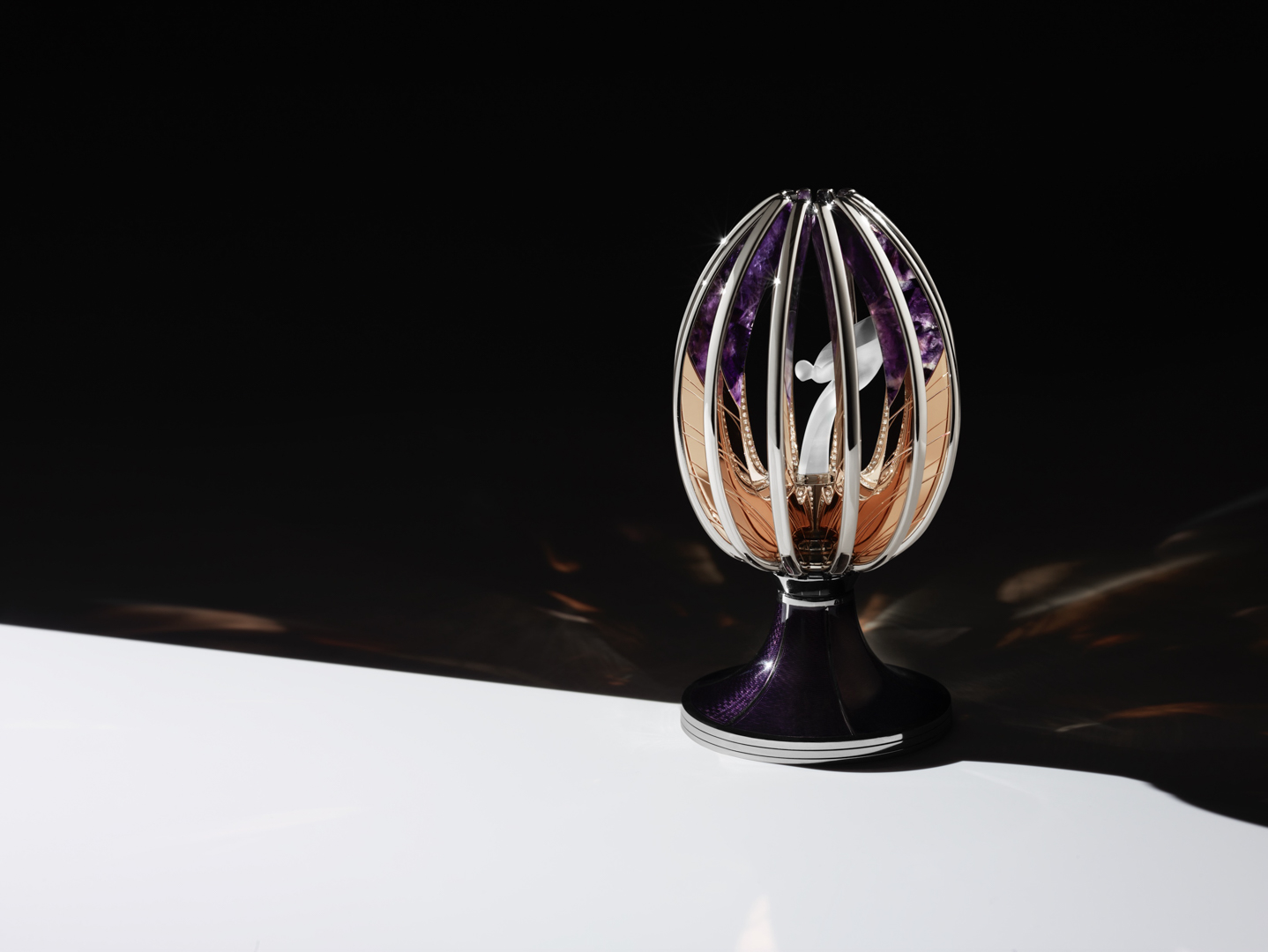 I must admit, when I was a kid, I thought Fabergé Eggs were Paper Mache (or the proper French way, Papier-mâché). Ya know, where you basically take mushy paper and glue it together to make crippled-looking birds in elementary school? Well, little did I know that Fabergé Eggs are actually much more valuable than mushy paper. In fact, just one is worth more than the entire school I learned how to make those mushy birds in. And now, Rolls Royce has teamed up with Fabergé to make a very special Egg.

For those of you that don’t know, Fabergé is a Russian jewelry design house. Before WWI, Fabergé made just 50 Imperial Eggs, which were made for the Imperial Russian Family from 1885 to 1916, and they’re some of the most valuable items on the planet. Most humans will never actually even see one of the original pre-1917 Fabergé Eggs, never mind own one, that’s how rare and valuable they are. 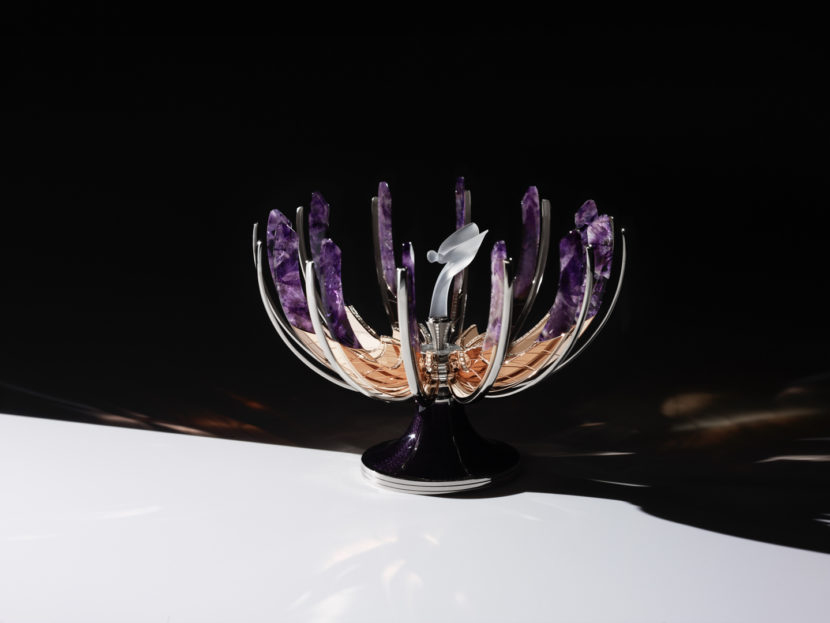 However, if you really want to see one, you can see this one — the Rolls Royce “Spirit of Ecstasy” Fabergé Egg. This Rolls Royce Egg is only the second to be commissioned by the Imperial Class since 1917 and it will be on display for a short while in London.

“’The Spirit of Ecstasy’ Fabergé Egg was born from an intrinsic desire to further the realms of Bespoke personalization. Responding to the continuing demands of patrons in search of unique and cherished possessions, a designer at the House of Rolls-Royce sketched an Egg, igniting a fascination that will undoubtedly become one of the most collectable items of modern times.” said Torsten Müller-Ötvös, CEO of Rolls-Royce Motor Cars.

According to Rolls Royce, “The Egg rests on an engine-turned, hand-engraved, purple enamel guilloché base of 18 karat white gold. Arms of rose gold define the shape of the Egg, acting as a protective chamber for the Egg’s precious inhabitant. Upon operating the movement via a discreet lever at the base of the stand, a sense of theater ensues as the boughs open to present the fine figurine of the Spirit of Ecstasy, hand-sculpted in frosted rock crystal, standing nobly in her opulent surrounds. The rose gold vanes, embellished with nearly 10 carats of round white diamonds, resolve into swathes of natural amethyst weighing over 390 carats, specially selected for its color saturation and quality. The purple hue of the enamel and amethyst provide a playful nod to the use of color found in Fabergé’s heritage.” 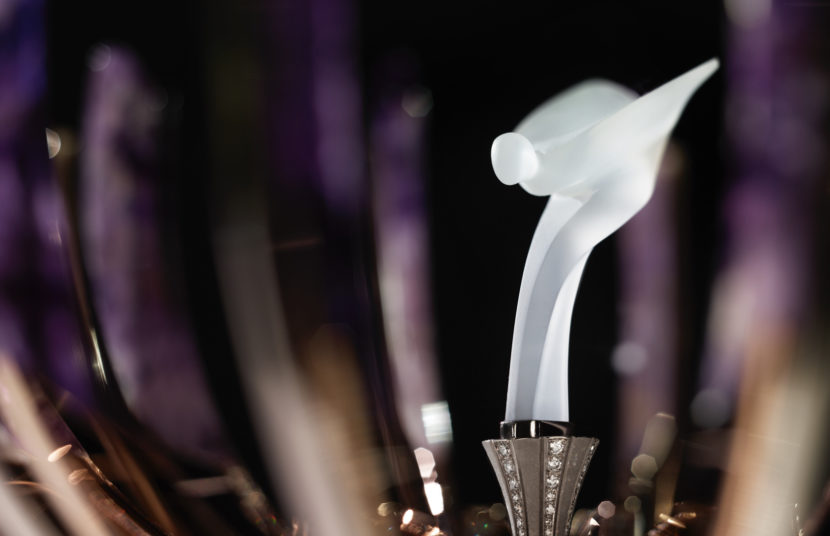 While the “Spirit of Ecstasy” Egg isn’t the only one to have an opening mechanism, it’s the most complicated and advanced mechanism of any Fabergé, ever. “A unique moment in both our companies’ history, the creation of the ‘Spirit of Ecstasy’ Egg represents the meeting of two masters of unrivaled quality and design, showcasing two globally recognized symbols – the Fabergé Egg and the Spirit of Ecstasy.”

Today, October 23, 2018, the “Spirit of Ecstasy” Fabergé  Egg will be premiere at the House of Rolls Royce in Goodwood, West Sussex, England, in front of a select elite group of the VI-est of Ps. The Egg will the be on display at the Fabergé’s London Window at Christmastime. After that, the Egg will go to an anonymous collector of both prestigious brands (Putin, is that you?). 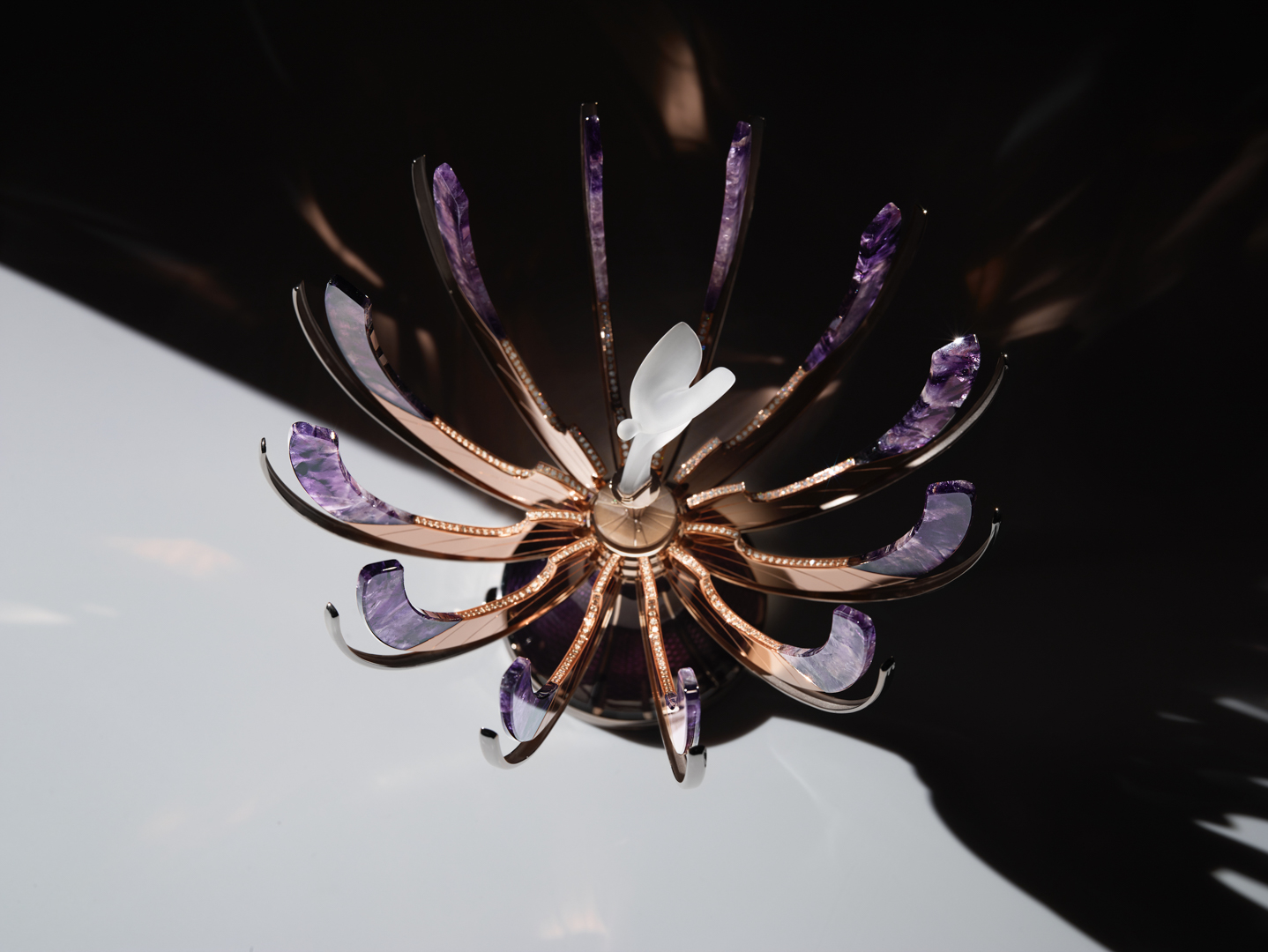 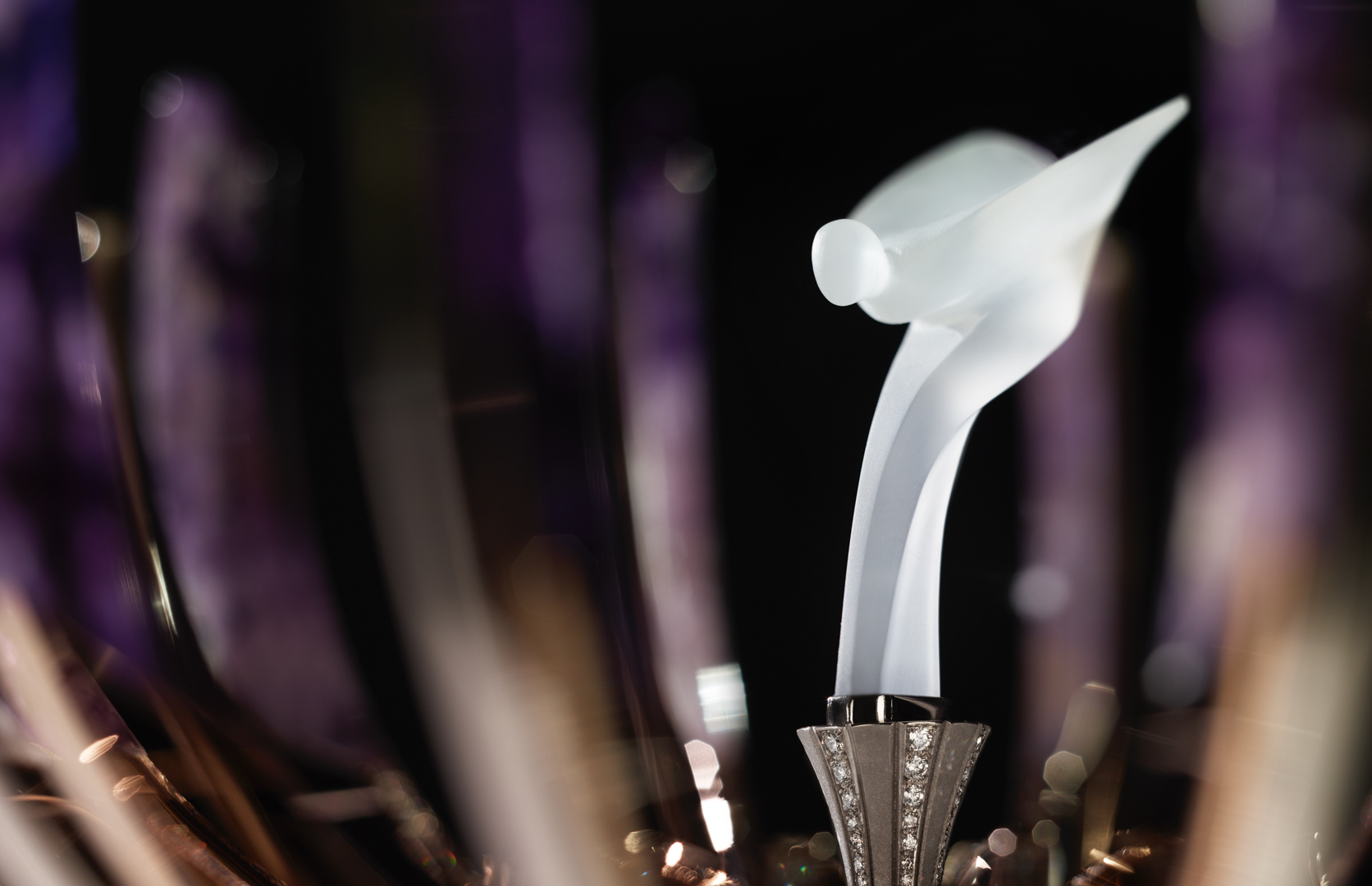 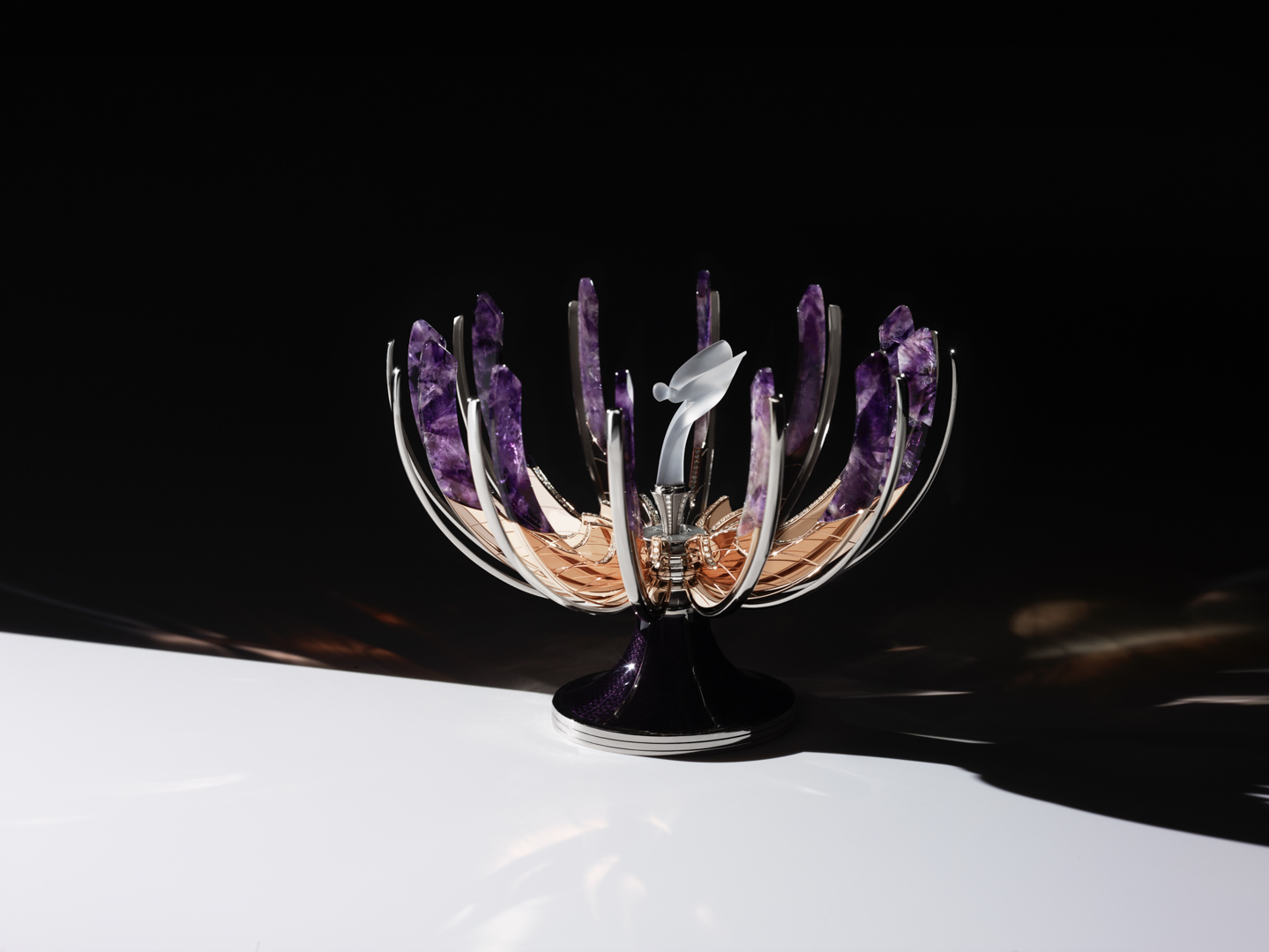