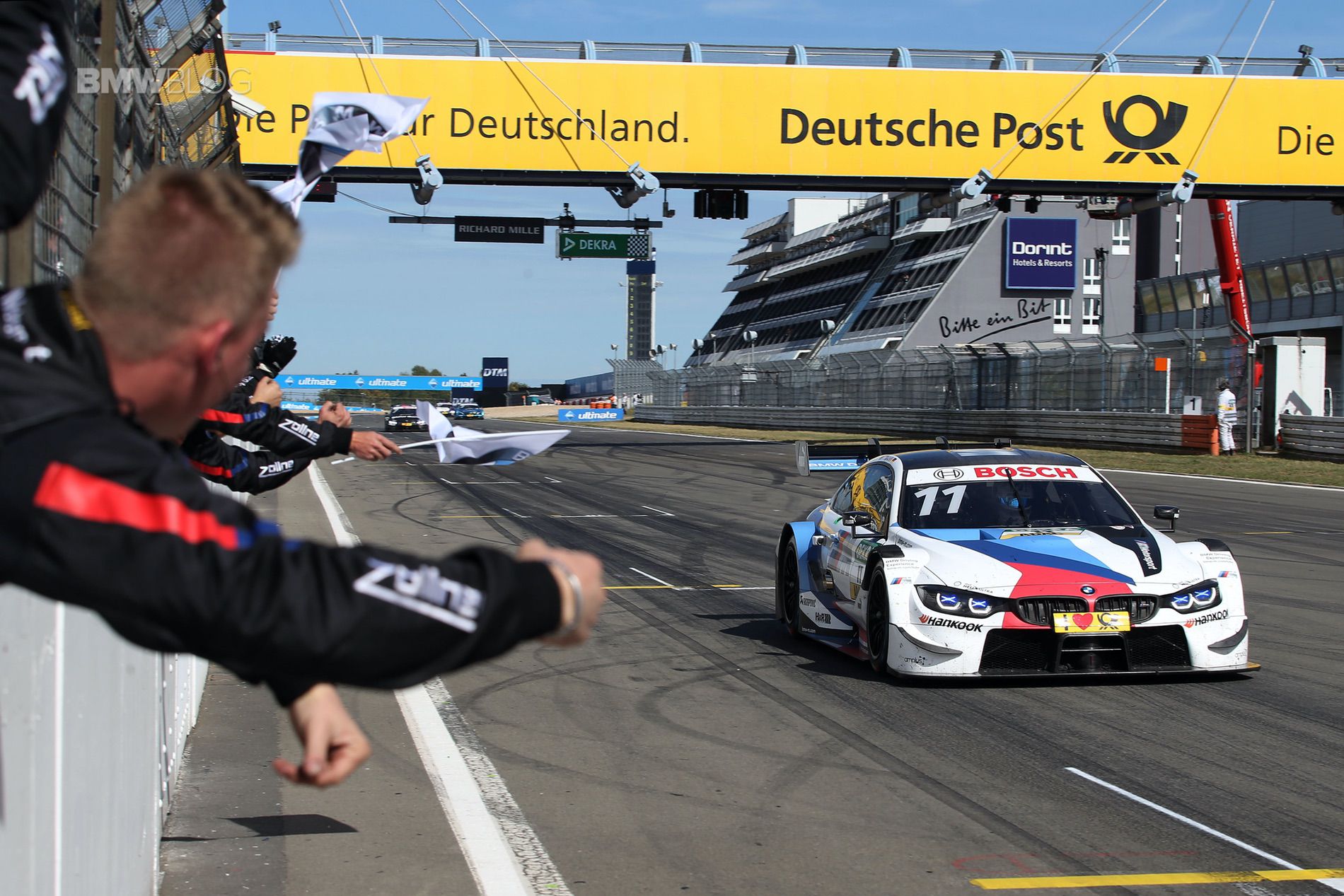 After completing 40 laps, he was just 3.439 seconds behind the winner, René Rast (GER, Audi). Wittmann now has 137 points and is the best-placed BMW driver in the overall standings, in fifth place. The BMW drivers once again gave a strong team performance with five BMW M4 DTMs making it into the top ten, scoring a total of 45 points. 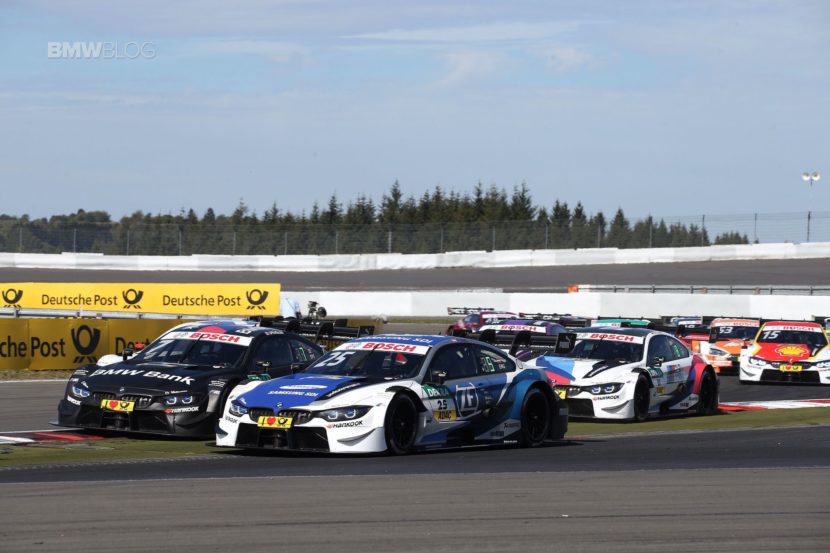 BMW Motorsport, BMW Team RBM and BMW Team RMG were competing in their 100thDTM race since BMW’s comeback in 2012. Farfus and Spengler have been involved in every one of those 100 races.

The race weekend in the Eifel also saw the debut of the BMW M Motorsport Days. More than 300 domestic and international guests experienced a wide-ranging and spectacular programme of events. The highlights included a BMW M Driving Experience and taxi rides on the Nordschleife in the BMW M5. Visitors also had the chance to take a look at a very special exhibition car: the BMW Concept M8 Gran Coupé. The new BMW M Town campaign also made its first appearance as part of the BMW M Motorsport Days. It also provided the first opportunity for the public to see the new BMW X3 M and the new BMW X4 M. 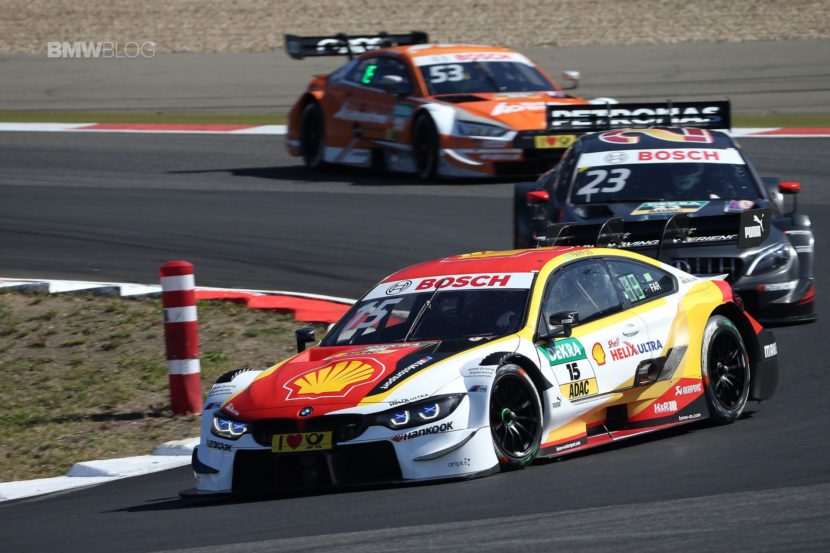 Reactions to Sunday’s race at the Nürburgring:

“Marco Wittmann did well to move up through the field today – and he was rewarded with a podium finish. Getting five cars into the top eight is a great result for BMW. Of course, after Bruno Spengler claimed second place on Saturday, we’d have liked to have topped the podium. However, all in all, we can definitely be satisfied with the race weekend here at the Nürburgring. I am very positive about the fact that we reached the podium and scored plenty of points in the 100th race since our DTM comeback in 2012. Congratulations are in order for René Rast, who put on a great performance this weekend with the ‘clean sweep’. It was also an exciting weekend off track: BMW M Motorsport Days allowed us to thrill visitors from all over the world with BMW M. The appearance of our BMW M4 DTM on the Nordschleife on Sunday morning was another highlight. Now we will move on from the ‘Green Hell’ and start our meticulous planning as we look forward with enthusiasm to the race at Spielberg.”

“Firstly, thanks to our Nürburgring. It is lovely to claim a podium finish at our home race and the 100th race for BMW. A big thank you to our entire team and to Marco Wittmann, of course. He drove a great race today. We are battling our way to the front right now and we will already start looking forward to the next race this evening. We will be giving our all there again. Nonetheless, it was a good weekend overall. Our friends and family were very happy.” 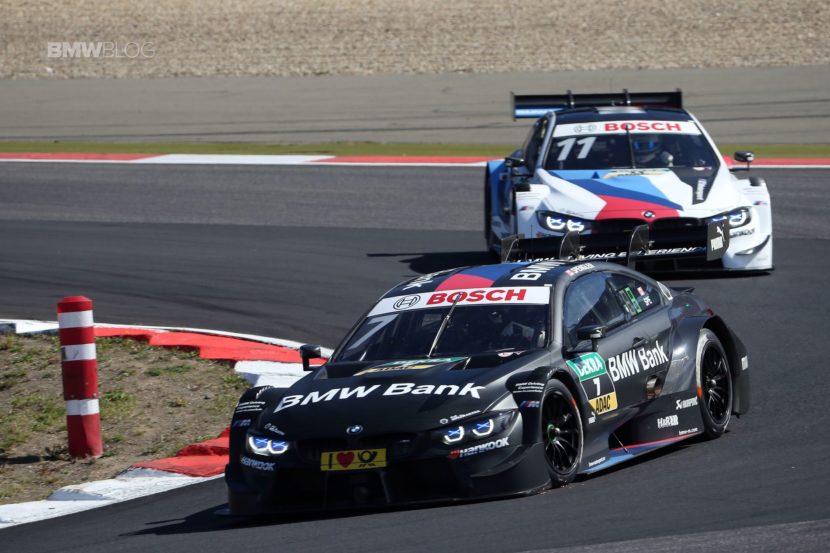 “Starting from ninth, our objective was to move up as far as possible. I managed to do that. Of course, you want to top the podium at your team’s home race but René Rast simply did a good job. We were a bit out of touch in the early phases. The first section of the race was extremely turbulent. I got into a few tricky positions and then lost a place to Paul di Resta. I was then able to work my way gradually back up. Of course, everyone benefited from the incident between Timo Glock and Lucas Auer. Overall, I am completely satisfied with third place. I drove a clean race and was close to the lead.”

“I am happy with the result. I couldn’t do much more than that from my starting position. We had a good racing pace and the car was running well but we will have to improve in qualifying if we want to place better in the race. Seventh position is OK but we will still have work to do.”

“It is a shame, as I think the car provided us with a good base. The start went well and then there was a fight with Gary Paffett on the first lap. I seem to have been a bit too optimistic after that with regard to the manoeuvre against Lucas Auer. I misjudged it. Sorry to Lucas – and sorry to my guys as well.”

“Firstly, congratulations to René Rast on this perfect weekend. He scored 56 points, which is really extraordinary. All things considered, we had a good weekend. In the second race, we got three cars into the points, finishing fourth, sixth and eighth. There was a lot going on at the start. I think we asserted ourselves well. I would like to thank BMW and the team for all the hard work. After Misano, this represents another step forward. We hope this will continue at Spielberg.”

“I am definitely very pleased with our qualifying performance. We were so close to pole position, twice. We really do have to improve in the race. You always want to score more points when you start so far up the grid. Hopefully I will manage that at my home race at Spielberg.”

“That was a good chase. The start went well and we were on the pace in the race. The car was not quite as good as yesterday. I had a few more problems with the balance during the race so we will have to analyse that, but I think that we made good progress by moving up from eighth to fourth. I am very pleased and will take this positive result with me to the next race.”

“I think it was a really good race, our pace was great. The first stint went really well and the guys did a great job at the pit stop: we were the fastest. Everything went smoothly in the second stint too. I tried to overtake Gary Paffett but it just wasn’t possible. But moving up from tenth to sixth is a great result and we scored some important points. Overall, it was a good weekend for BMW.”