Despite SUVs not typically being enthusiasts’ favorite vehicles, the upcoming G05 BMW X5 seems to be a very popular car among fans of the Bavarian brand. Especially here, I see more comments and requests about X5 info and news more than almost any other upcoming BMW, save for maybe the 8 Series or 3 Series. While that’s a bit weird on the surface, as BMW enthusiasts are mostly interested in small sports cars, it actually makes a bit of sense.

The new G05 BMW X5 is a replacement for a car that’s actually still quite fresh, the F15-gen X5. The F15 X5 debuted in 2014, making it only four years old and two years shy of the typical age limit for BMW models. So BMW is replacing it a bit early, which is odd considering that the F15 X5 still looks great and sells very well. However, the car that’s replacing it, the G05 BMW X5, seems to be even better, with better looks, a far better interior, more luxury, better powertrains and newer technology. So it’s going to be a car that could quickly become one of BMW’s best, which is why fans are so excited. Fortunately for you X5 fans, the online configurator for the new G05 is live on BMWUSA.com. Like most enthusiasts when a new car configurator comes out, I jumped online and immediately spec’d one for myself. 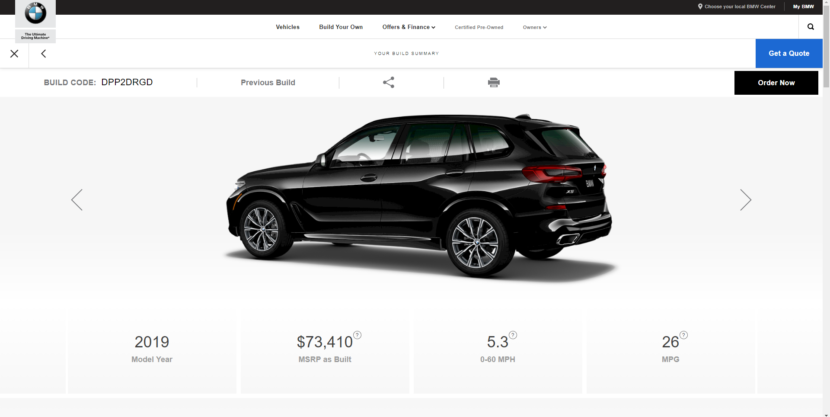 There are two model variants currently available for configuration — the BMW X5 xDrive40i and the xDrive50i. The xDrive40i comes with BMW’s B58  3.0 liter turbocharged I6 and the xDrive50i comes with the brand’s famous 4.4 liter twin-turbo V8. Despite the V8 being awesome, I actually went for the X5 xDrive40i because I’m a huge fan of the B58 engine. Then, I of course chose the M Sport Design because it looks fantastic, with its more aggressive lower front air intakes, 20-inch wheels and shadowline trim.

I also bumped it all the way up to Executive Tier, despite that inflating the price to $70,000. I did that mainly for the Icon Adaptive LED headlights which looks freakin’ awesome. Then, I painted it black and gave it black extended Merino leather because it looks kick-ass blacked out like that with the Icon LED headlights and 20-inch wheels. As for trim, it got the Fineline Stripe Brown High Gloss trim, which is annoying to type but looks great. I then gave it the Luxury Seating package (because why not?), heated front and rear seats as well as armrests and steering wheel, Harmon & Kardon, glass controls and M Sport brakes.

Basically, I built the most kick-ass BMW X5 this side of an X5 M.