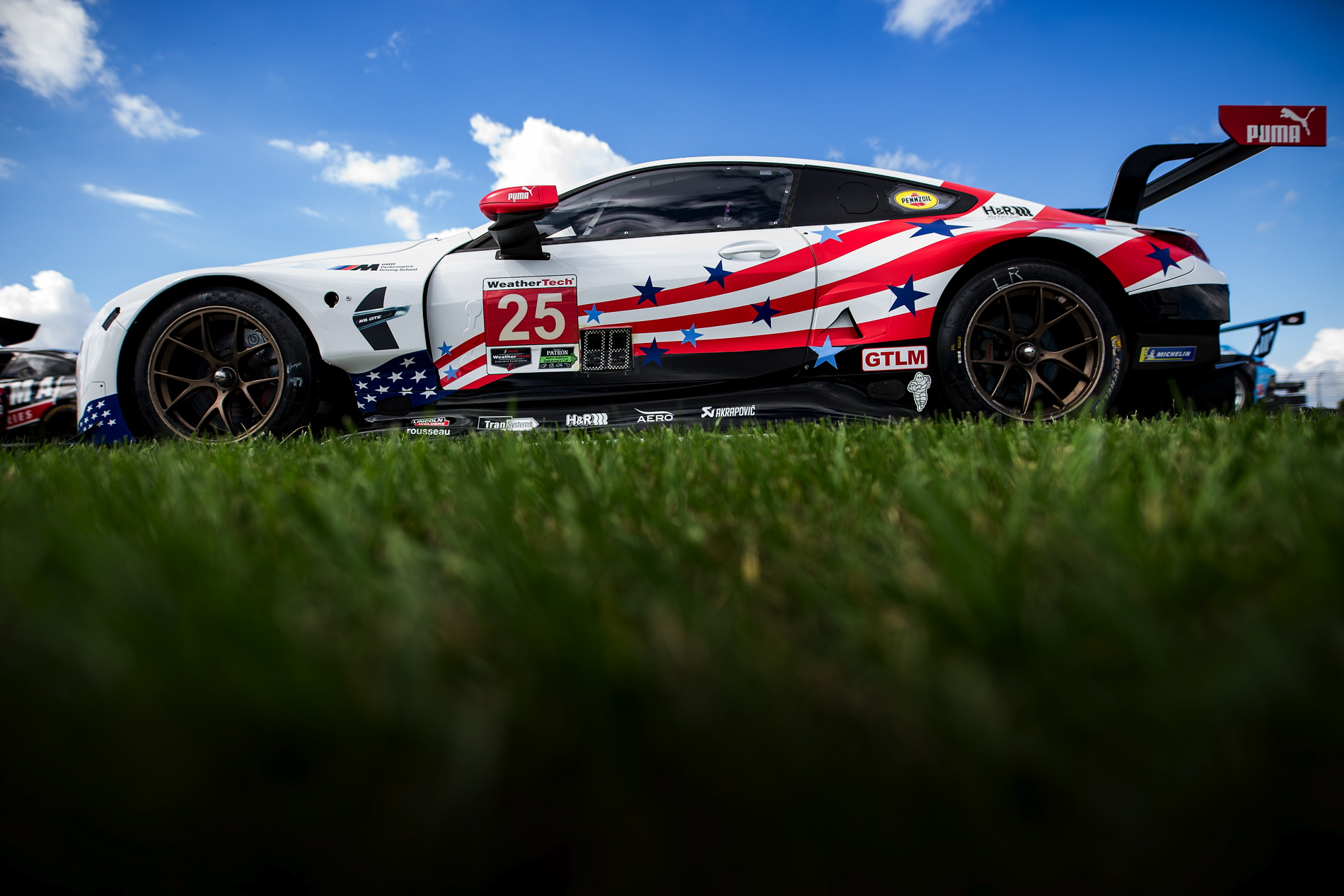 BMW Team RLL finished the Sahlen’s Six Hours of The Glen in seventh and eighth positions in GTLM class. The No. 25 BMW M8 GTE finished seventh with Bill Auberlen, Connor De Phillippi and Alexander Sims sharing the driving duties after a problem-free race. The No. 24 BMW M8 GTE, of Tom Blomqvist, John Edwards and Jesse Krohn, finished 27 laps down in eighth after a challenging race. The race was won by the No. 66 Ford GT. 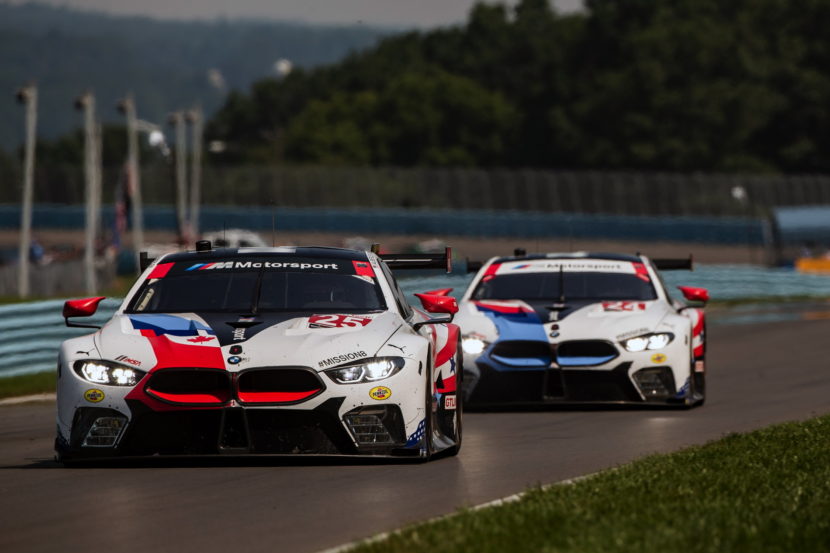 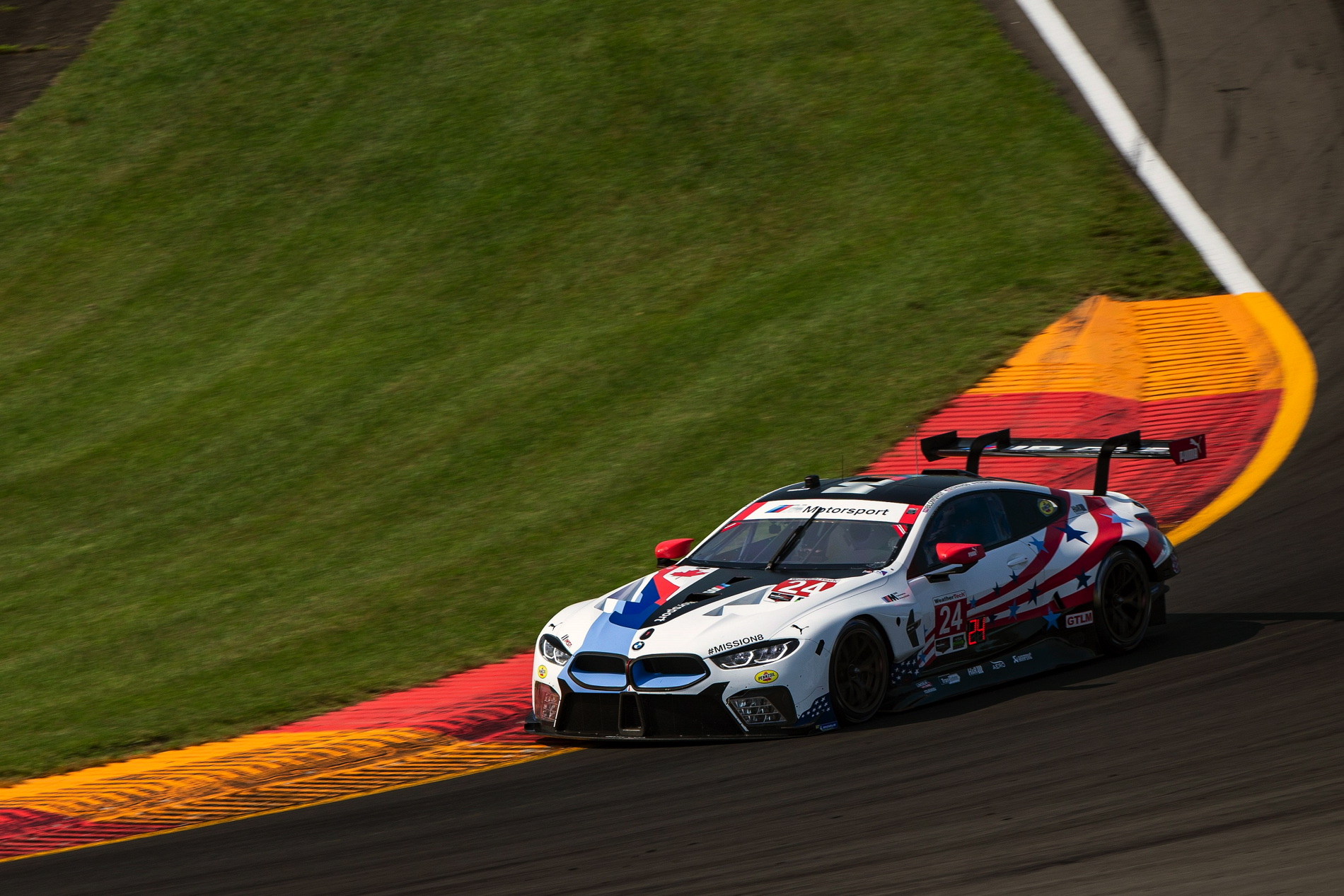 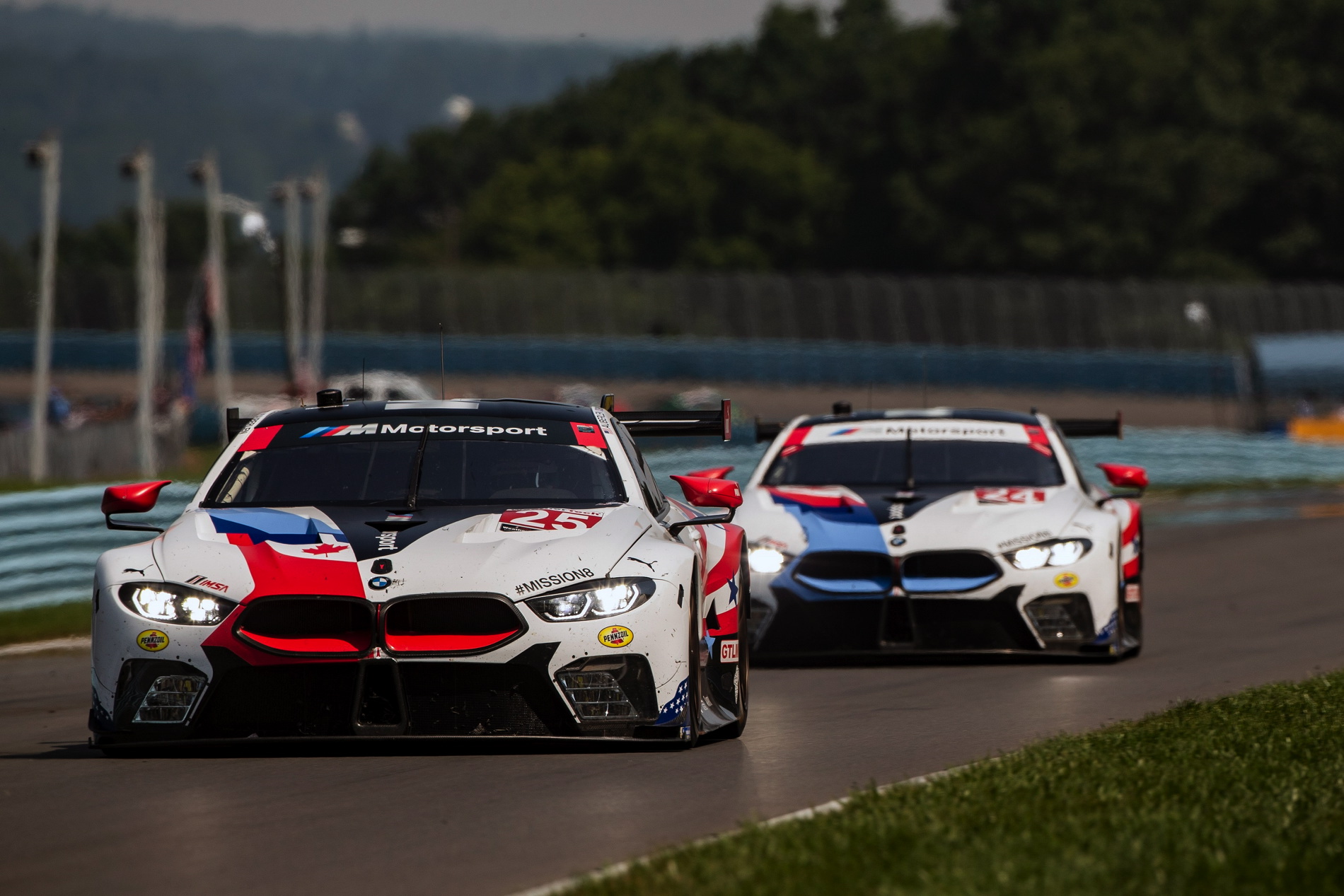 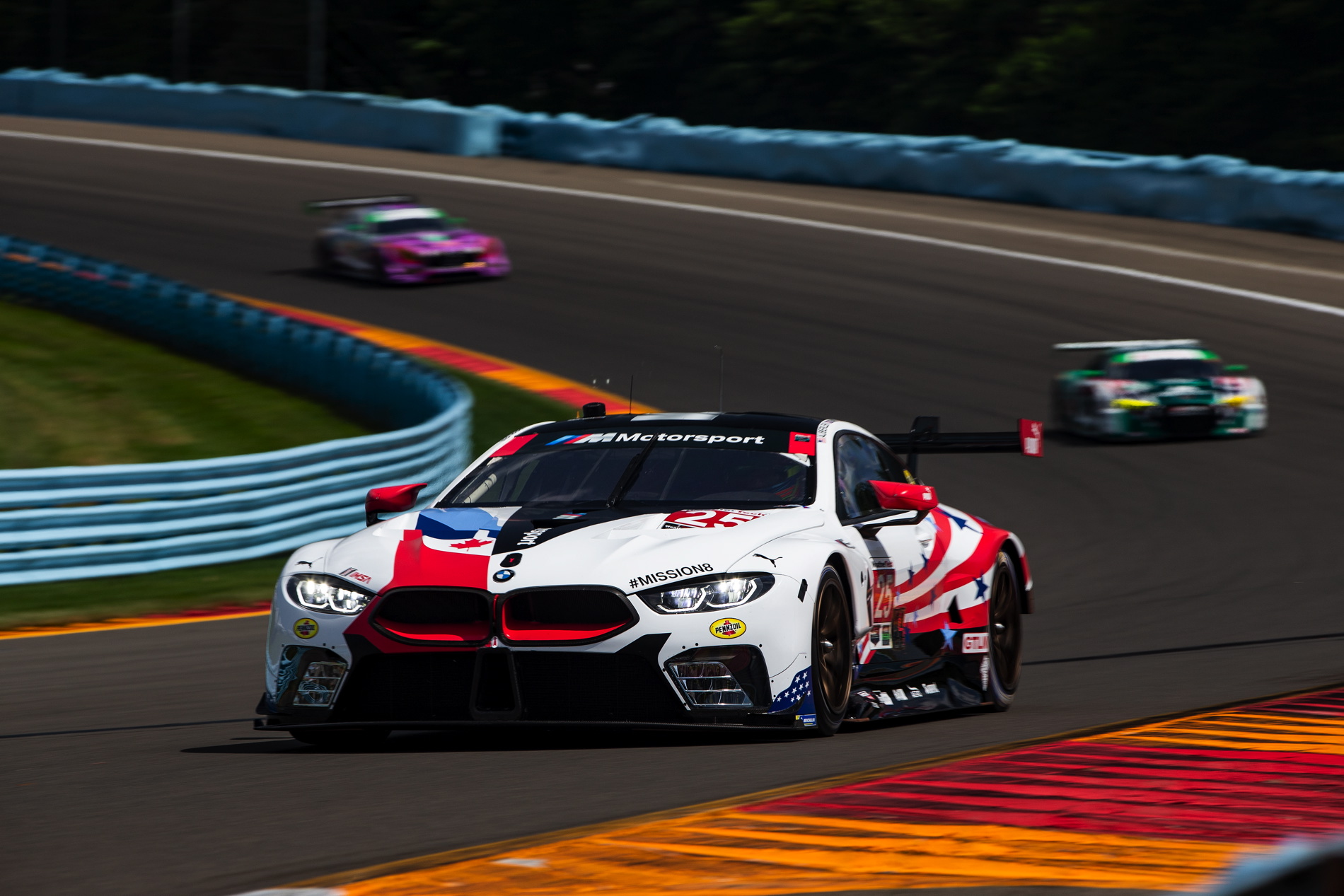 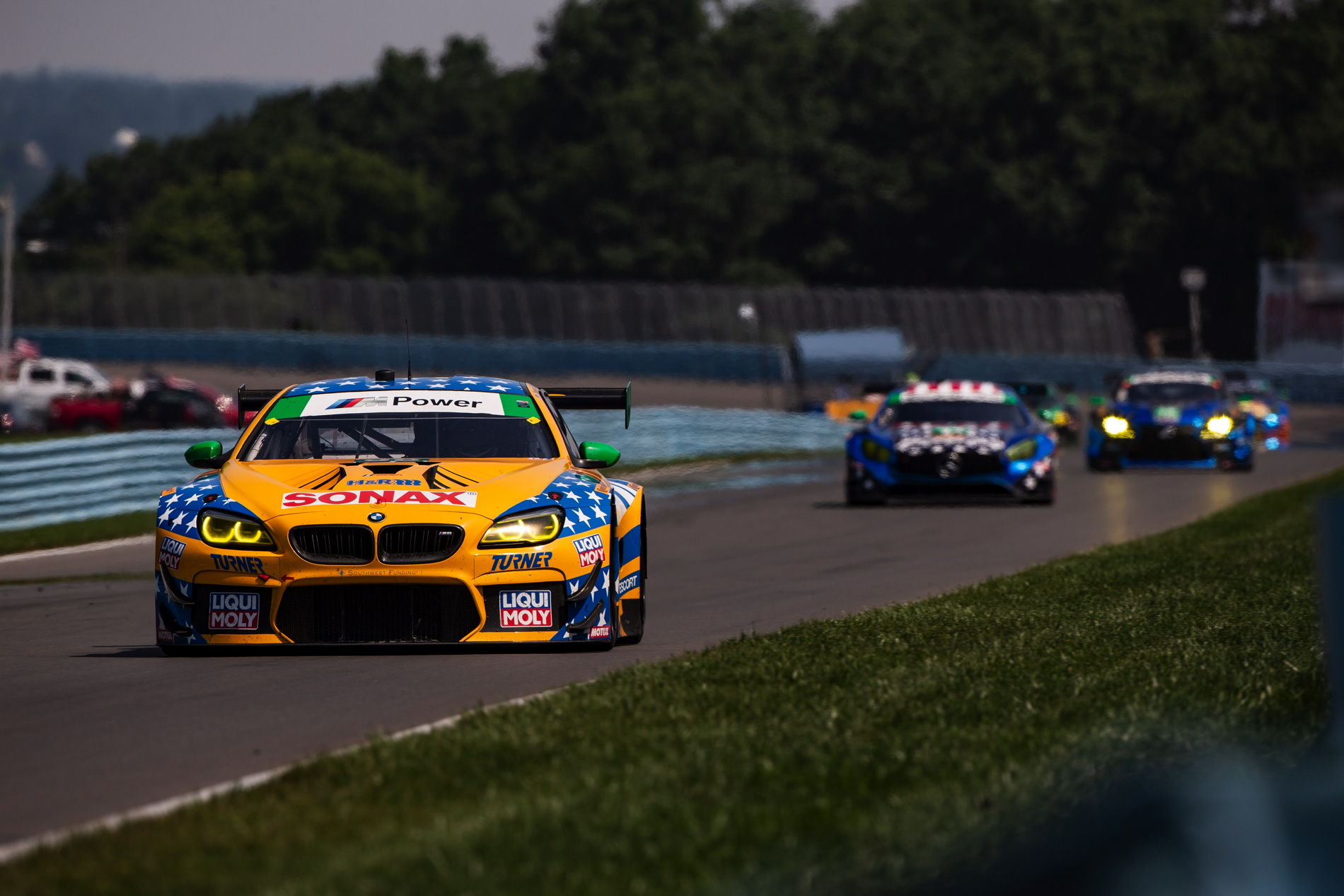 Both crews were prepared for a very hot day that had been forecast and the team was ready for everything but the bad luck that struck the No. 24 M8 GTE on the very first pit stop, 27 laps into the race. Running over a piece of pit equipment at the end of the stop, Blomqvist was returned to the pits by the stewards for a drive-through penalty. He returned to the race one lap down, completing his second stint 33 laps later. Jesse Krohn took over, but the car refused to start and was ultimately pushed to the paddock twice for repairs, dropping another 25 laps to the GTLM field after the replacement of the starter motor. Now 27 laps in arrears the car completed the remainder of the race in the eighth position.

The No. 25 M8 GTE drivers put in a workmanlike day, cycling from De Phillippi to Bill Auberlen to Alexander Sims to race in the seventh position for almost every lap of the race.

“We knew it was going to be a tough race for us before we came, so we did everything we could to operate as cleanly as we could.” said Brandon Fry, BMW Team RLL Technical and Racing Operations Director. “If any opportunities for a good result opened up for us we wanted to be there to take advantage but unfortunately the race didn’t work out that way. It turned out to be a long race for us, but in the end, we tried out some different things and I think we learned a little bit as a team.”

Ford GTs of Richard Westbrook and Joey Hand held onto their qualifying 1-2 ahead of the Corvettes of Tommy Milner and Antonio Garcia. Behind the Fords, Laurens Vanthoor in the #912 Porsche beat out the #4 Corvette with Oliver Gavin at the wheel.

Bill Auberlen, driver No. 25 BMW M8 GTE (P7):
“It was great to be back behind the wheel of the BMW Team RLL M8 GTE. The team did a really great job, but today was obviously not our day.”

Connor De Phillippi, driver No. 25 BMW M8 GTE (P7):
“Obviously, during the first stint of the race you’re just trying to play it safe. Six hours is a long one so we just tried to keep a clean car. The race developed as expected; the first lap was a little crazy with some crashes but we made it through. It was clear that we were missing pace compared to our competitors. We tried to run a strategic race and that went as planned but we weren’t able to capitalize on it in the end. All the guys on the team worked really hard and we move on to Mosport looking for a better result.”

Alexander Sims, driver No. 25 BMW M8 GTE (P7):
“We clearly didn’t have the pace today, we experimented with strategy at the end and had to do some fuel saving.. Credit to the team for working as hard as they could, and trying to find any possible advantage, but yeah, this was not our weekend.”

Tom Blomqvist, driver No. 24 BMW M8 GTE (P8):
“Watkins Glen was a fun experience! It is obviously a great shame we never had the pace to fight for a proper position in this race, and we ran into some troubles that hindered our end result, but the track was fun. I enjoyed racing with the BMW Team RLL guys, everyone was really welcoming, and I hope to be back here racing sometime in the not too distant future.”

John Edwards, driver No. 24 BMW M8 GTE (P8):
“We weren’t really fighting for a podium position so it was just a matter of lapping to finish the race after we had the issue with the starter early on. We tried to make the time useful however, practicing some fuel saving measures, but ultimately it is hard to look at the positives on a day like today.”

Jesse Krohn, driver No. 24 BMW M8 GTE (P8):
“It’s a shame about being out of it because of early problems when there’s nothing you can really do but finish the race and get the points. Even if we wouldn’t have had problems today, we did not have the pace. You just need to improve and there’s not much we can do with what we have but hopefully it will change.”

Next up for the IMSA WeatherTech SportsCar Championship is a trip north of the border to the Canadian Tire Motorsport Park in Bowmanville, Ontario for the Mobil 1 SportsCar Grand Prix on July 8th.