The BMW M2 is now in its final months of production. The car we’ve all grown to love will be replaced by the new Competition model later this year and things are bound to change quite a bit. However, the one thing that won’t change anytime soon will be the comparisons everyone does between the BMW and the Audi RS3. Though the two aren’t exactly rivals, they do appeal to roughly the same crowd to some extent.

The Audi however is built on a FWD-biased chassis, its quattro system and its transversely mounted engine favoring sending the power to the front wheels. Nevertheless, in a standing start drag race, the system will show its edge over rear-wheel drive models, such as the M2. There are other notable differences too, like the engines, for example. The new RS3 uses a 400 HP 2.5-liter five-cylinder turbocharged engine which is a peach to drive by all accounts. 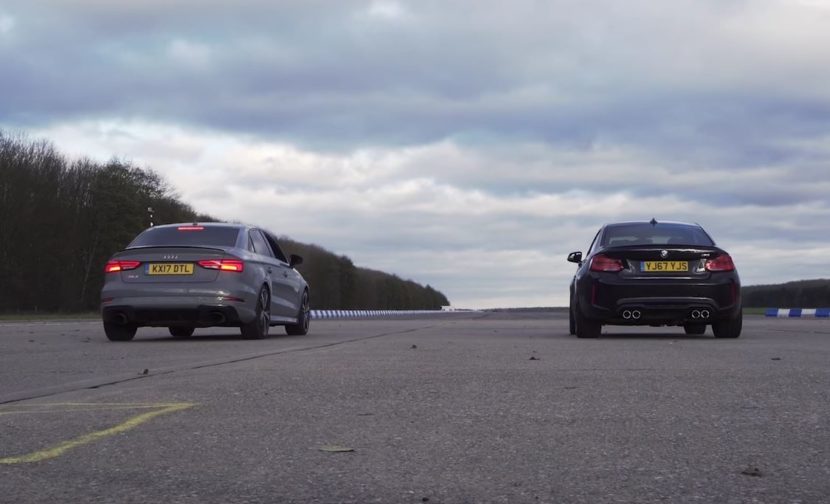 On the Bavarian side of things, the M2 still uses the N55 engine in its most potent guise. The 370 HP straight six sends all of its power to the rear wheels through a seven-speed DCT gearbox in this particular case but, unlike the Audi, you can also get it with a manual gearbox. Off the line, the odds are obviously against the M machine and that shows in the first drag race in the video below. No surprises there. When the two go at it from a rolling start though, things are a lot closer.

Of course, the extra power of the RS3 makes sure it crosses the finish line first. However, the new M2 Competition is set to get a new engine, a detuned version of the S55 mill of the M3 and M4 models, which is set to have 400 HP. That is bound to change things in every aspect, including when it comes to drag racing and we can’t wait to see how the new car will handle itself.