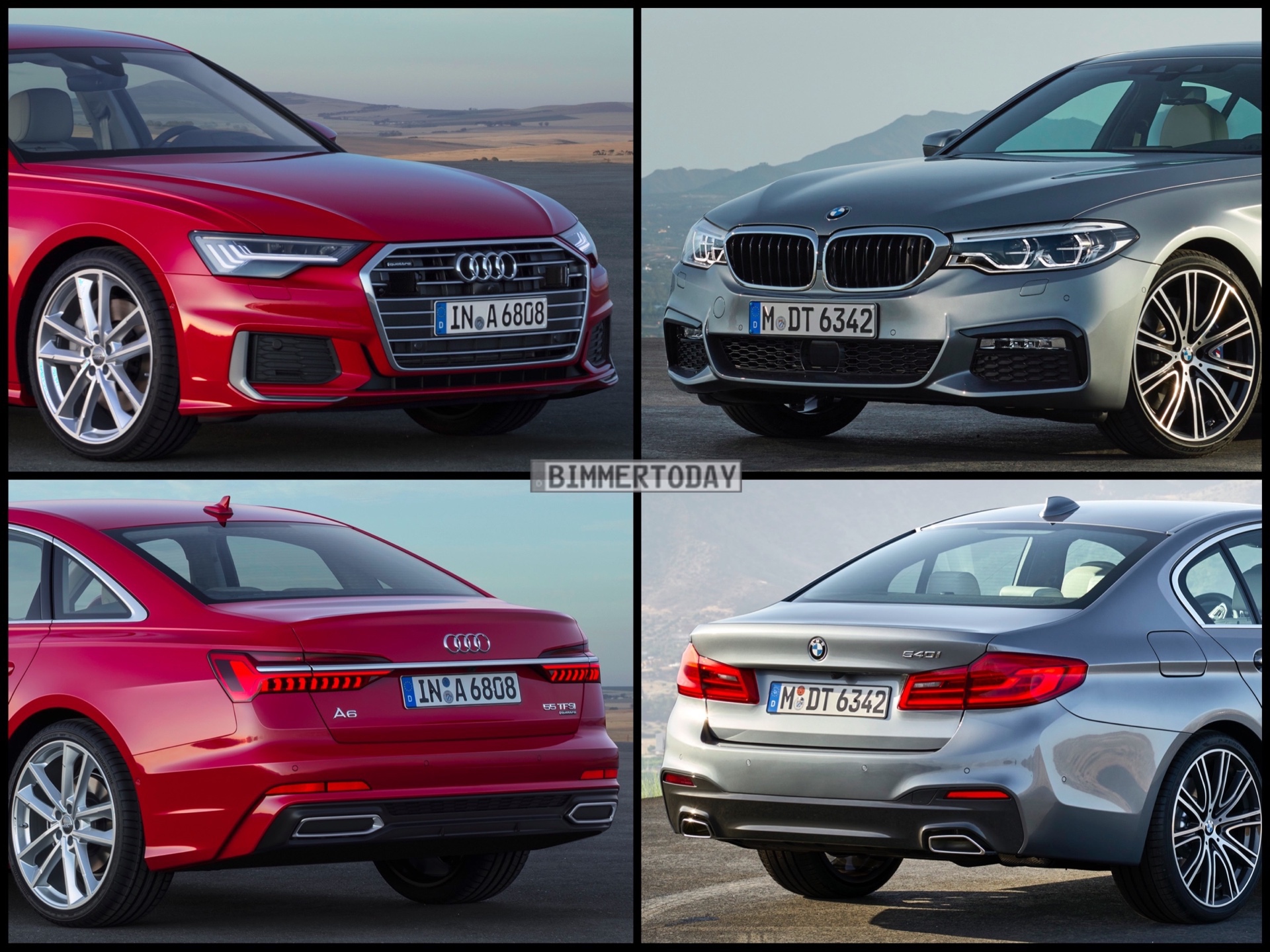 The Geneva Motor Show celebrates the debut of the new Audi A6, one of the most important opponents of the BMW G30 5 Series. There are already first photos and technical details of the luxury saloon from Ingolstadt, but today, we take the opportunity for a first image comparison with the 5 Series. Both models are equipped with the optional Sport Package and therefore perform somewhat more dynamically than the standard vehicles.

With an outside length of just 4.94 meters, the 2018 Audi A6 offers almost the same length as the BMW G30 5 Series, with a wheelbase of around 2.92 meters but five centimeters shorter than its counterpart from Munich. 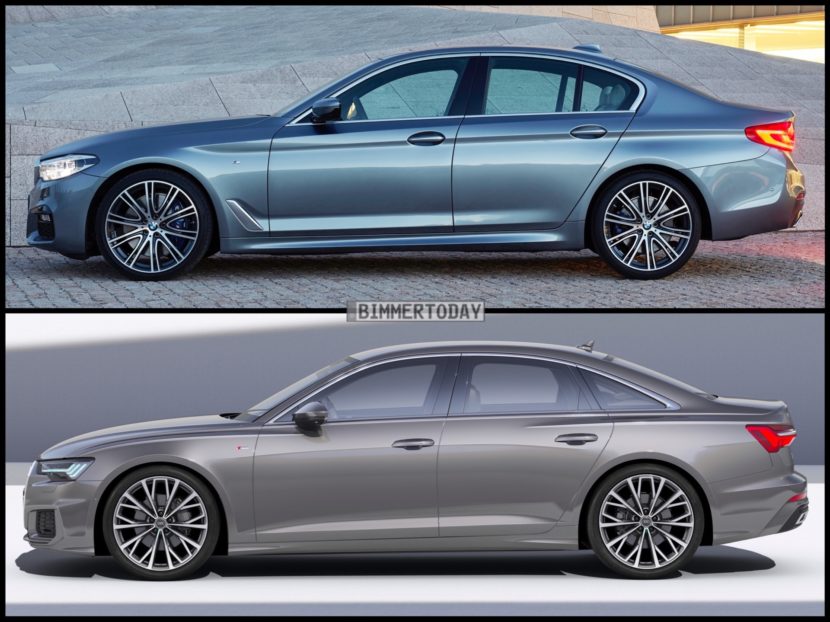 The new A6 is also two centimeters flatter and at the same time just under two inches wider than the 5 Series – differences, which should be visible to the naked eye in direct comparison.

Technically, the new Audi A6 is expected to closely follow the big brothers A7 and A8. All engines are referred to as mild hybrid and are gently electrified by a 48V belt starter generator and small lithium-ion battery. The technology allows the A6 C8 to sail efficiently between 55 and 160 km/h and stop the engine early in start-stop situations. Audi promises that a total of up to 0.7 liters of fuel per 100 kilometers can be saved in this way. 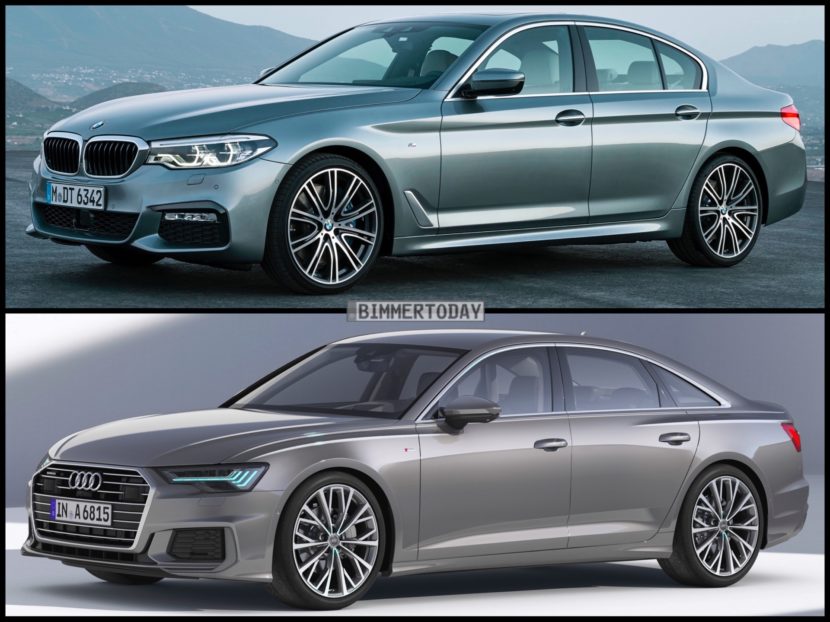 For the market launch, there are only a 3.0 TFSI V6 petrol engine with 340 hp and a 3.0 TDI V6 diesel with 286 hp to choose from. Both models are equipped as standard with quattro all-wheel drive, with less powerful and more efficient front-wheel drive versions to follow later. While the new A6 3.0 TDI uses an eight-speed automatic transmission, the A6 3.0 TFSI has a 7-speed dual-clutch transmission.

Just like the current BMW 5 Series and its predecessor, the Audi A6 is now optionally available with all-wheel steering. A redesigned suspension made of aluminum to provide improved rolling and noise comfort and an optional air suspension are available. 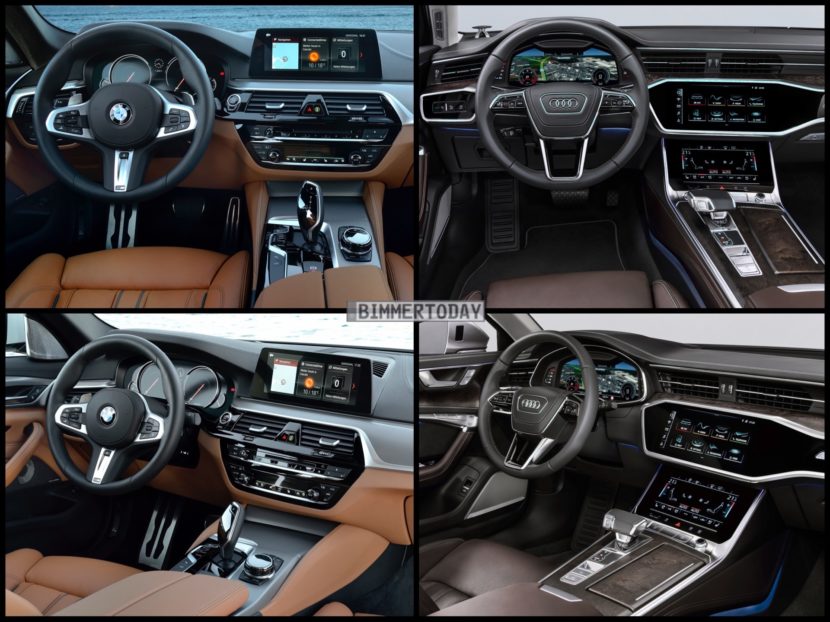 The proximity to the A7 and A8 is also evident in the interior. Two large touchscreen displays with 10.1 and 8.6 inches screens dominate the center console, while behind the steering wheel lies a Virtual Cockpit with another 12.3-inch display. In addition, there is a head-up display that projects important information into the driver’s immediate field of vision. Similar to the current BMW iDrive with live tiles, the Audi A6’s infotainment system called MMI Touch Response can be personalized, so the position of individual functions and displays can be changed within certain limits.

The Audi A6 is also no match for the assistance systems. The new Audi sedan supports the driver during parking, in city traffic and of course on highways. In addition to a maximum of five radar sensors, five cameras and twelve ultrasonic sensors, a laser scanner is also optionally used to monitor the surroundings of the vehicle. Thus, the Adaptive Driving Assistant not only regulate the speed, but also supports the driver with light steering interventions while holding the lane.

Here is the image comparison: 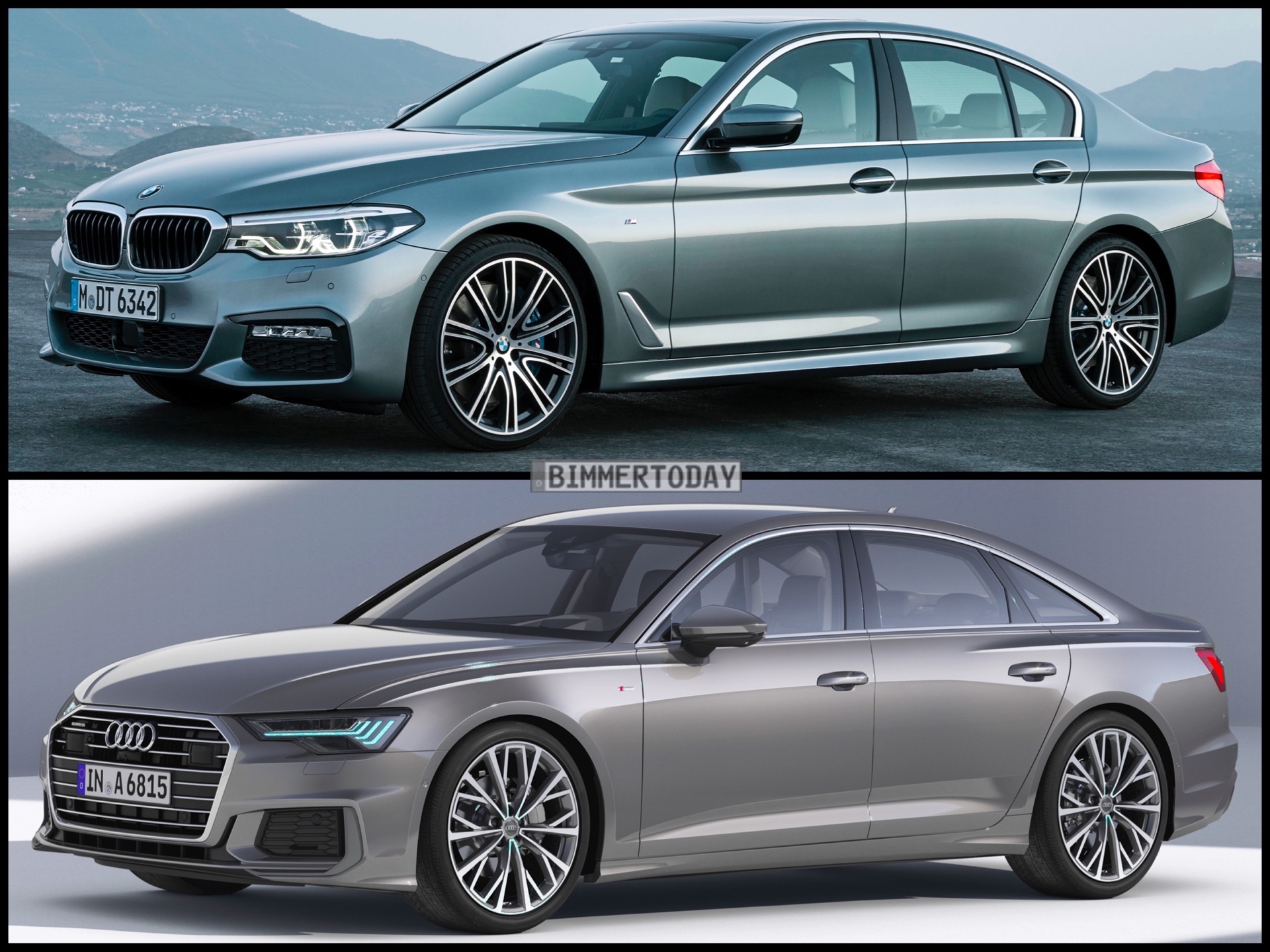 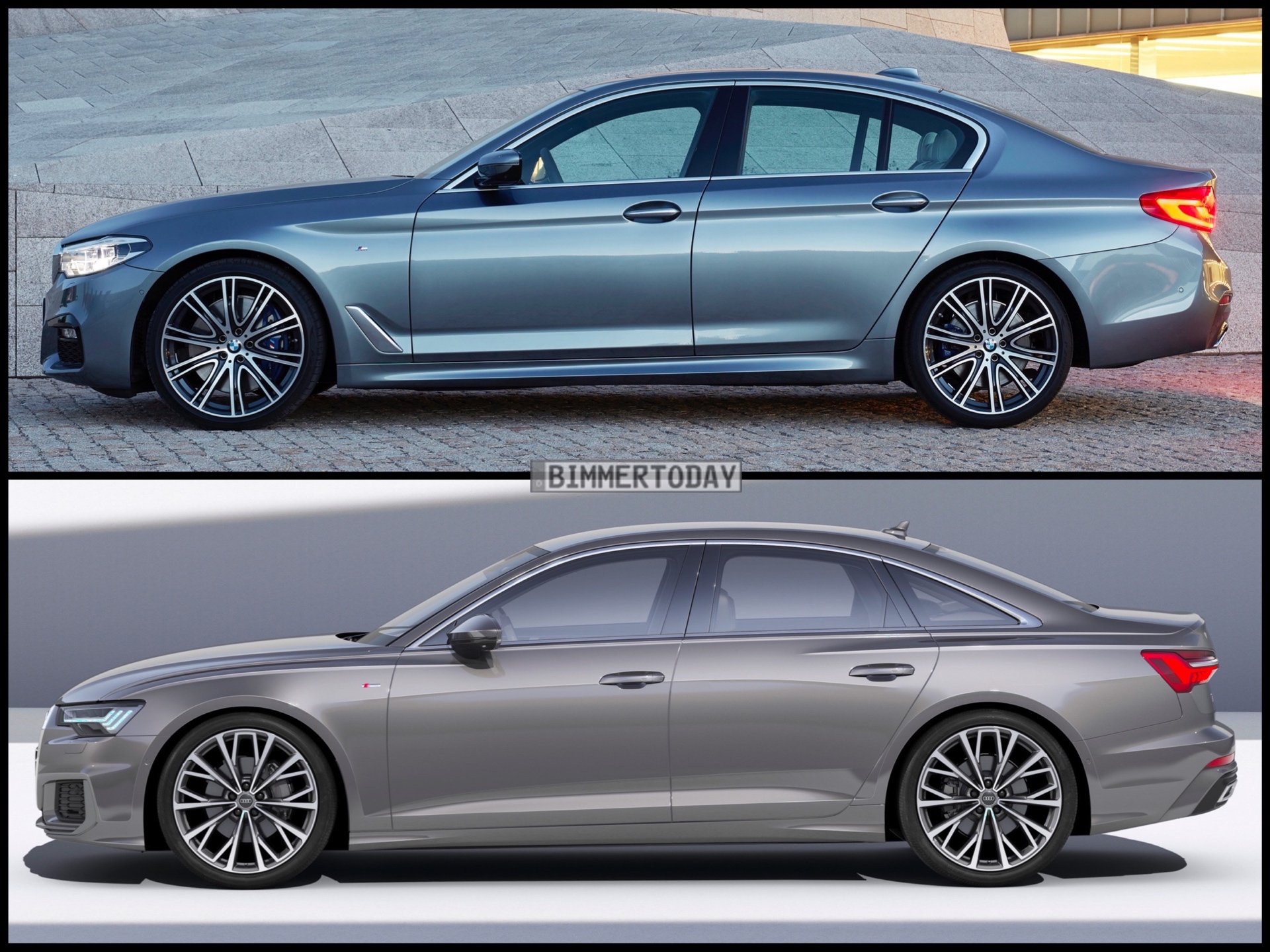 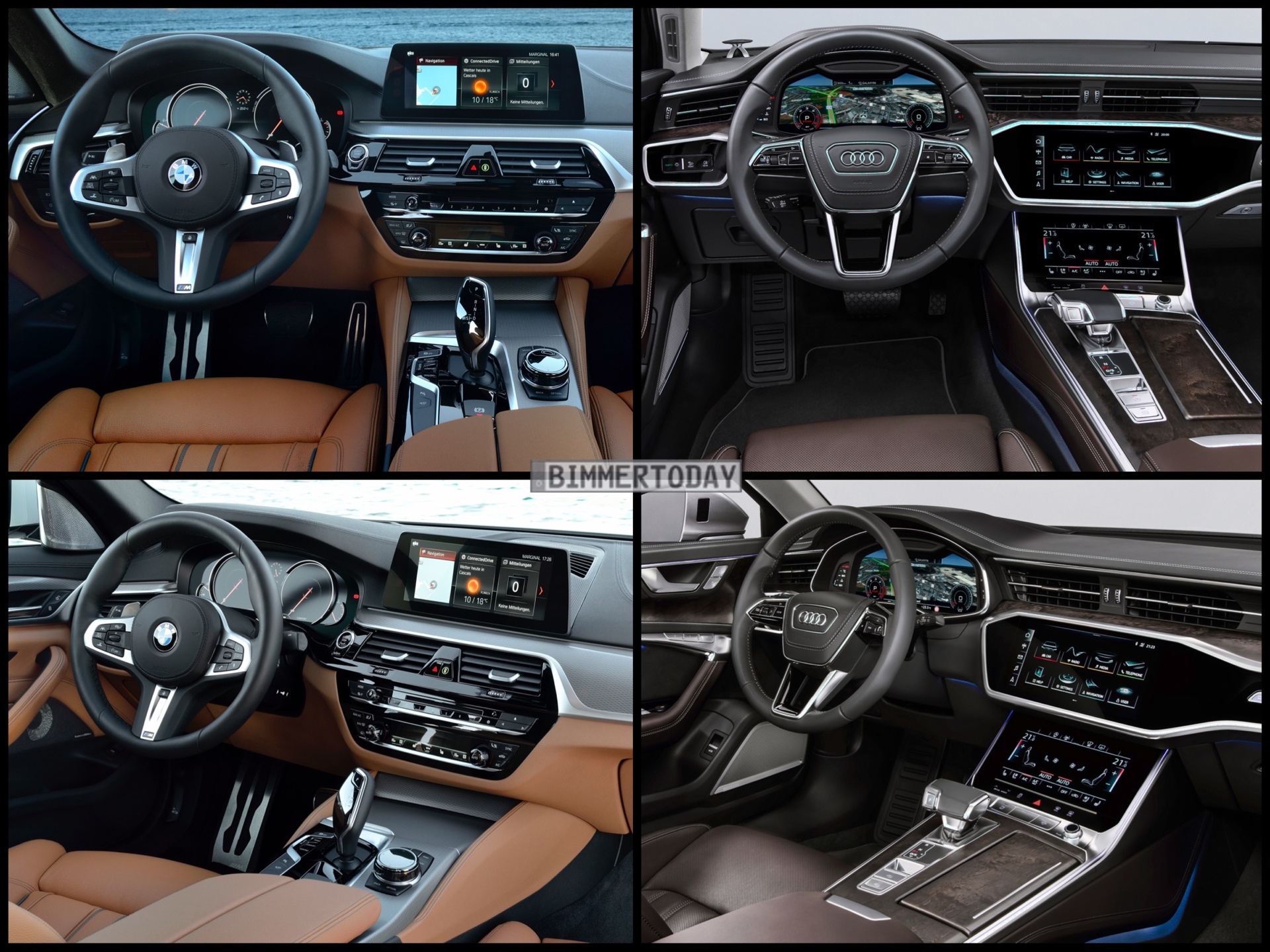