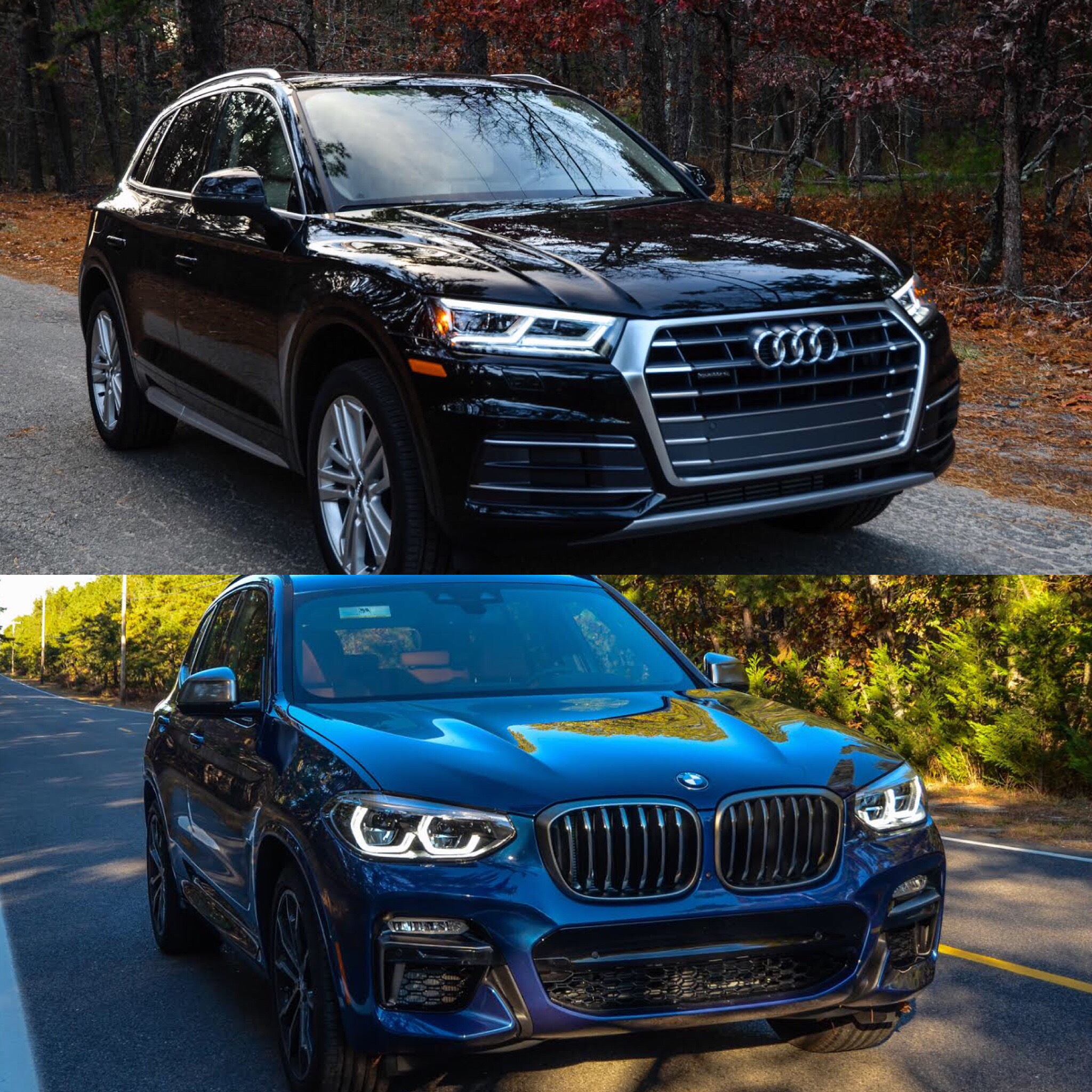 Now that the second-generation Audi Q5 has hit dealers in America, it’s already become one of the best-selling SUVs in the segment. Customers have been loving the new Q5’s combination of styling, technology and luxury. When we tested it, we realized why customers love it, even if it isn’t the most exciting SUV on the market. However, how does it stack up against its newest competition and, in our opinion, its most dangerous rival — the BMW X3.

Personally, we felt that the BMW X3 was the more fun car of the two to drive and, to be honest, the better car overall. In Audi’s defense, though, the Q5 we tested was the standard 2.0T Quattro and the BMW X3 we tested was the go-fast M40i. So it would have been much more fair to test the Audi SQ5 against it. Having said that, we’re not here to compare specs or performance. Instead, we’re going to compare the main metric by which customers measure these cars — styling. Customers buy cars first and foremost on how they look, both inside and out. So let’s look at which car is the better looking car, the new Audi Q5 or the brand-new BMW X3. 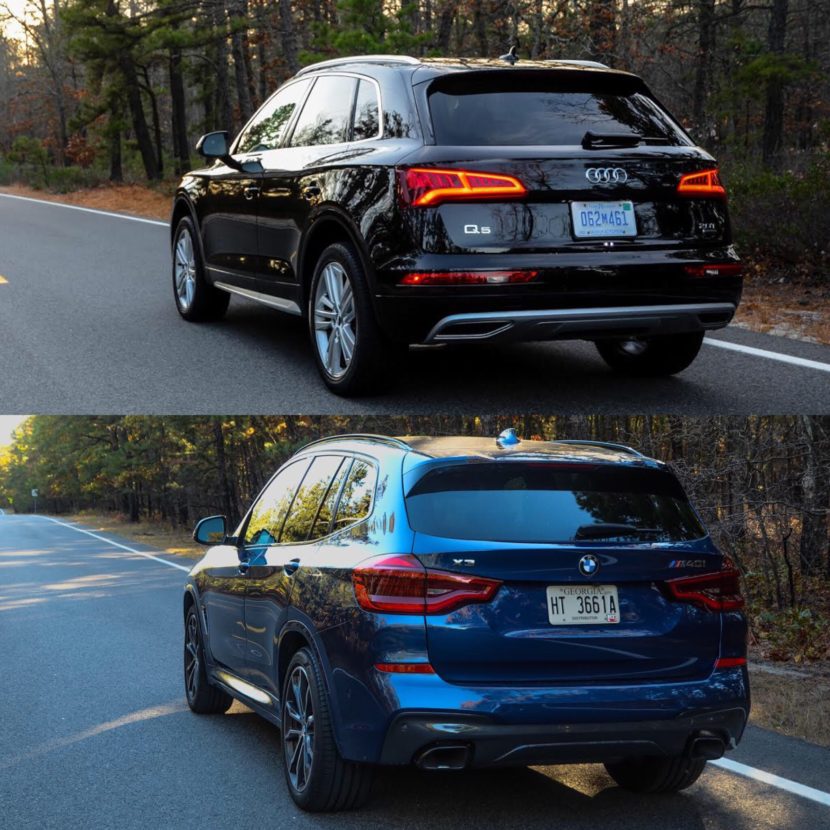 This comparison is interesting because both cars are good looking but in very different ways. So it really is hard to pick a favorite because there are times when I’d rather have the Q5’s styling and times where I’d prefer the X3. It really depends on my mood.

From the front, I think the Audi Q5 takes it. Its massive Singleframe grille and angular headlights give it a modern, high-tech and aggressive look. It gets a knock for its faux air intakes in the lower front lip but, aside from that, the Q5 has the more handsome mug. The BMW X3 is a good looking car from the front but its massive Kidney Grilles can look a bit like flared nostrils and, if you look long enough, it sort of looks like one of the pigs from Angry Birds. Still, it’s a handsome car, with cool (and real!) front air intakes and a heavily creased hood that makes it look aggressive and muscular. 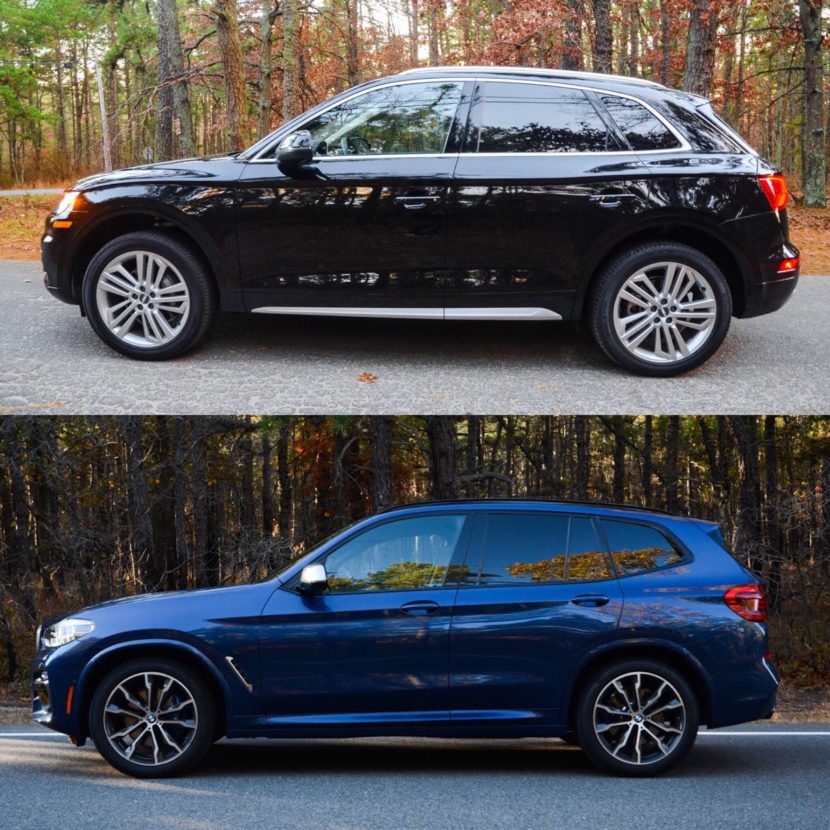 In profile, the BMW X3 has to take it. The Audi Q5 is not a bad looking car from the side by any means but it’s certainly a bit bland. Admittedly, Audi sort of intended for it to be a bit reserved, as keeping the same simplicity of the first model is something that customers love.

Still, it’s a bit disappointing, especially when looking at the X3. The Bimmer’s silhouette is muscular, sharp and dynamic. It looks aggressive, like a sporty SUV. The way the rear fenders flare out and the shoulder line creases upward toward the pinched Hofmeister Kink makes it look athletic in a way that the Q5 simply does not.

Out back, this one is tough. I’m not in love with either, to be honest. While the BMW X3 is a bit more muscular and seems to have a bit better of a stance, its taillights are a bit odd and I don’t really like them. Whereas the Audi Q5 has great looking taillights, which pulse their indicators, but the rest of it is just so bland.

However, I think I have to give the win to the BMW here and it’s for one reason — real exhaust pipes. The Audi Q5 has fake exhausts which is inexcusable coming from a brand with such performance history. If Audi wants to keep the exhausts hidden for luxury purposes, don’t even bother putting fake exhaust tips there, they look unbelievably tacky. So BMW takes the win on having real exhaust tips alone.

Where it gets really tricky to judge, though, is on the inside. Both cars have superb cabins with great technology and impeccable build quality. It really comes down to taste; are you more of a tasteful luxury type of person or more of a functional and sporty type? The Audi Q5 is the former, with its really simple, yet elegant and beautiful, cabin design. Everything is smartly laid out and perfectly put together.

Its materials are top notch and everything feels incredibly premium. I personally love the fact that every singly knob is knurled. It also has really great tech. While its MMI system isn’t the best, its Virtual Cockpit digital gauge cluster is astonishing and the best in the business. 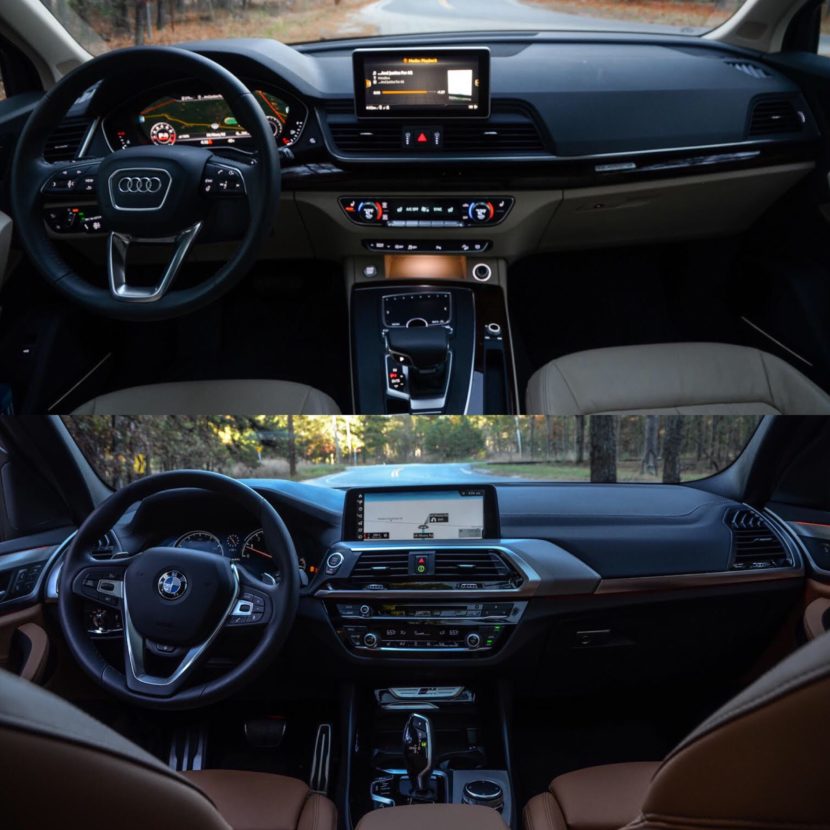 The BMW X3 is really nice inside, too. Though, its design isn’t as visually appealing as the Q5’s. It looks good, sporty and even sort of utilitarian but it isn’t necessarily exciting. However, it does make up some ground with equally impressive materials and build quality along with some of its own merits.

For instance, the BMW X3’s seats are better than the Q5’s (though, the M40i comes with specific seats, the Audi SQ5 might be more comparable) and BMW’s iDrive is easier to use than Audi’s MMI and has some more interesting features, such as touchscreen compatibility and Gesture Control. Still, I think if I had to spend long periods of time in either, I’d choose the Q5. It’s just such a lovely place to be.

So both cars are tied at two wins each. As I said at the beginning, both cars are superb and really hard to choose from. It really comes down to preference. Do you want something a bit more relaxed (even the SQ5 is calmer than the X3 M40i), with subtle, elegant styling or you do want something more aggressive, more fun? If you want the former, the Audi Q5 is for you. If you want the latter, go with the Bimmer. 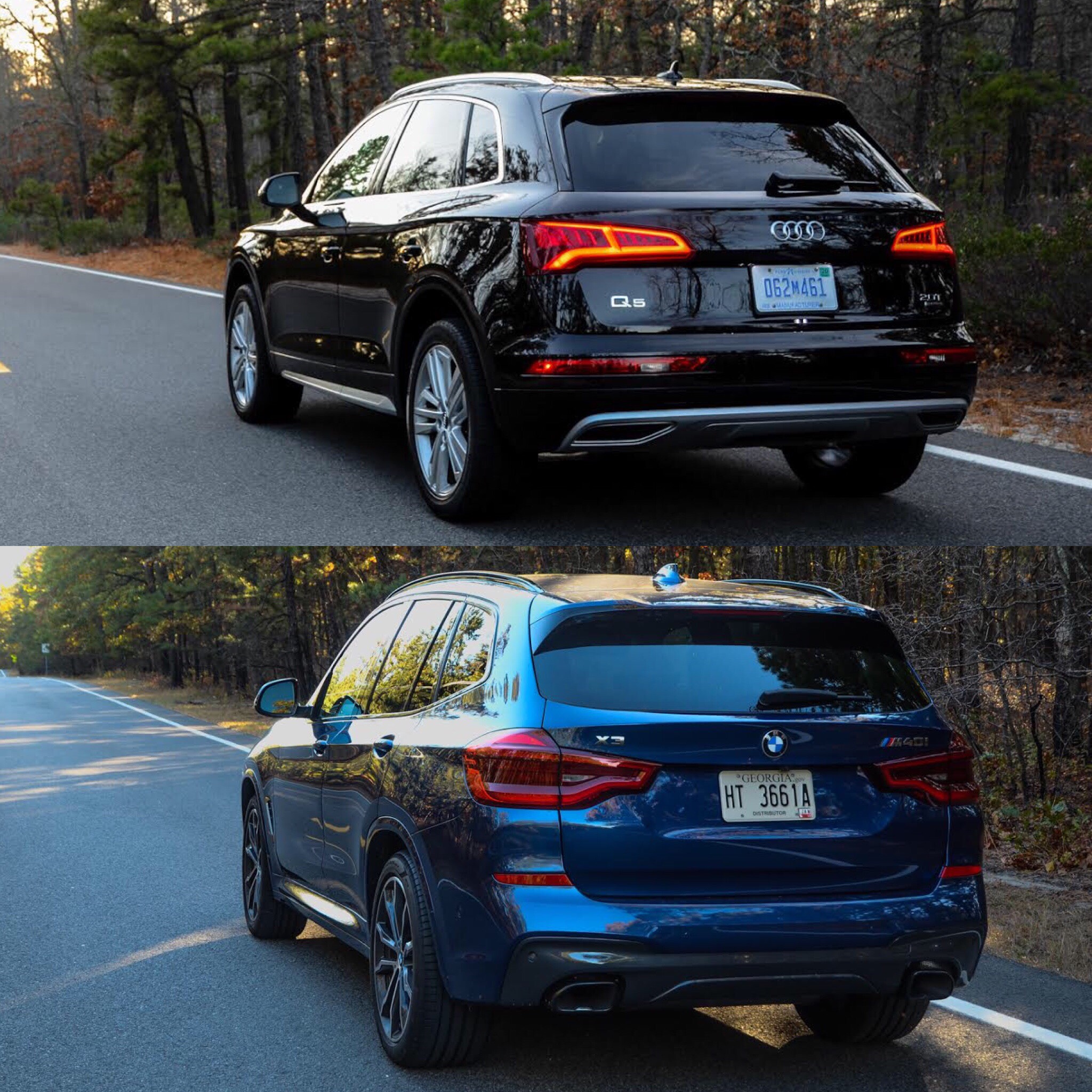 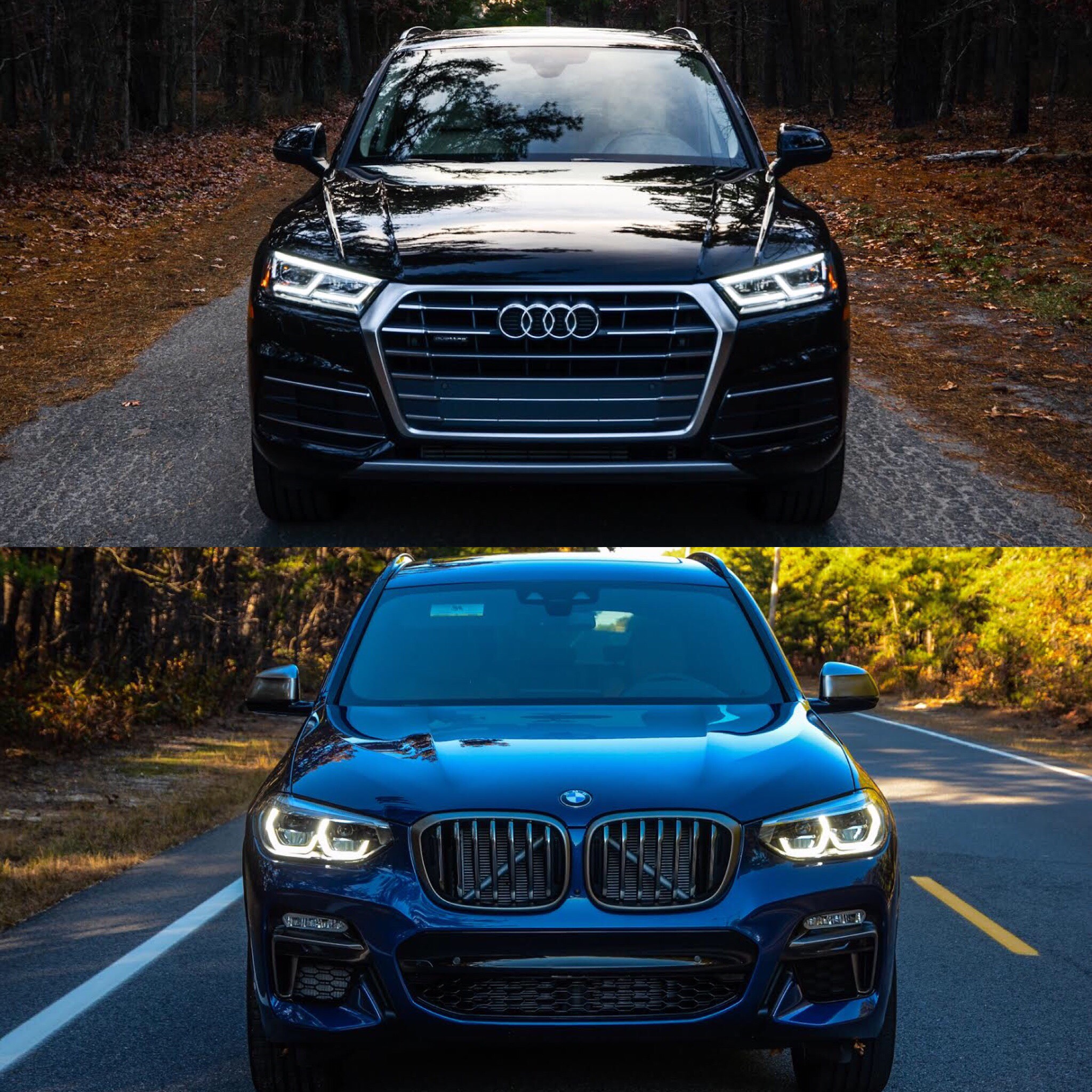 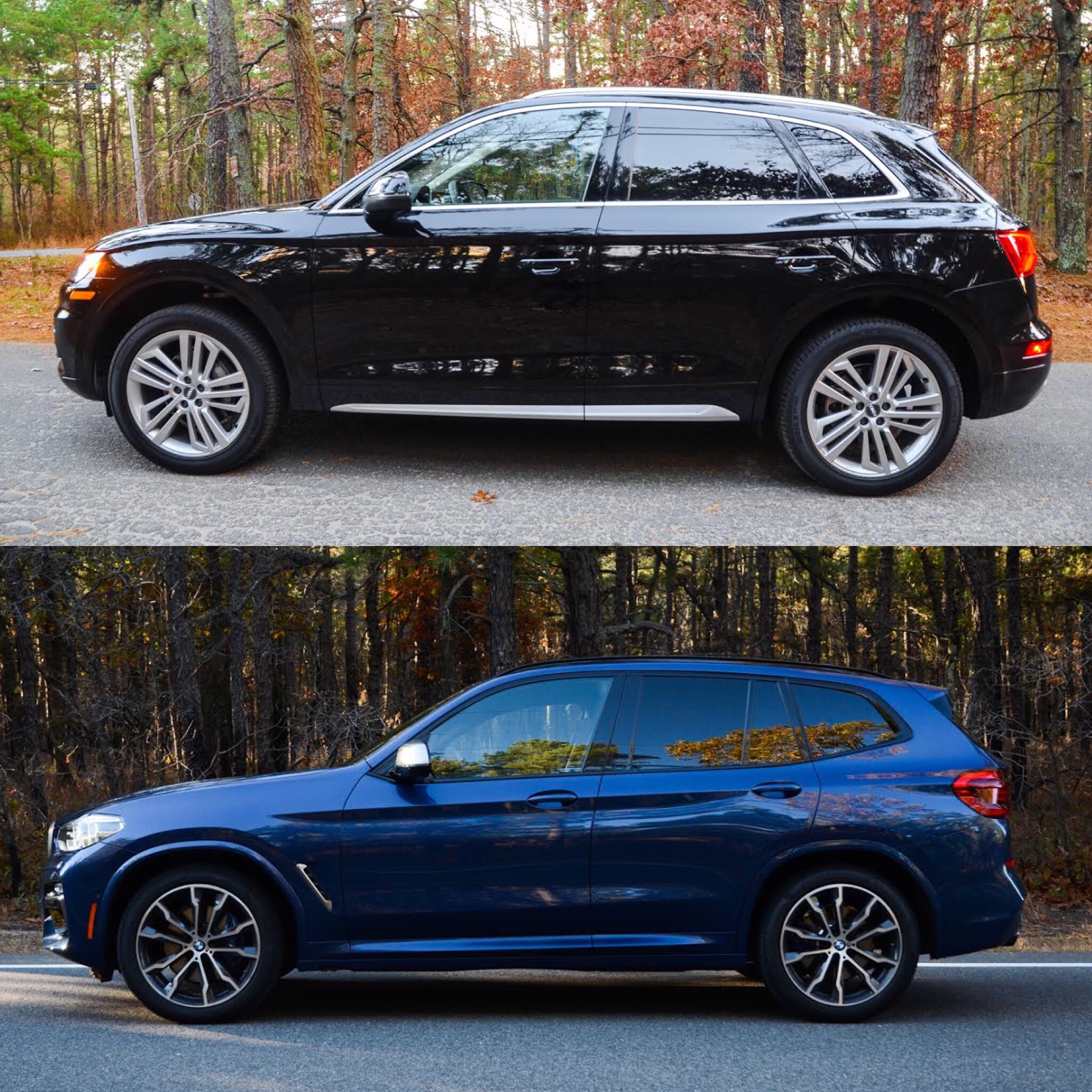