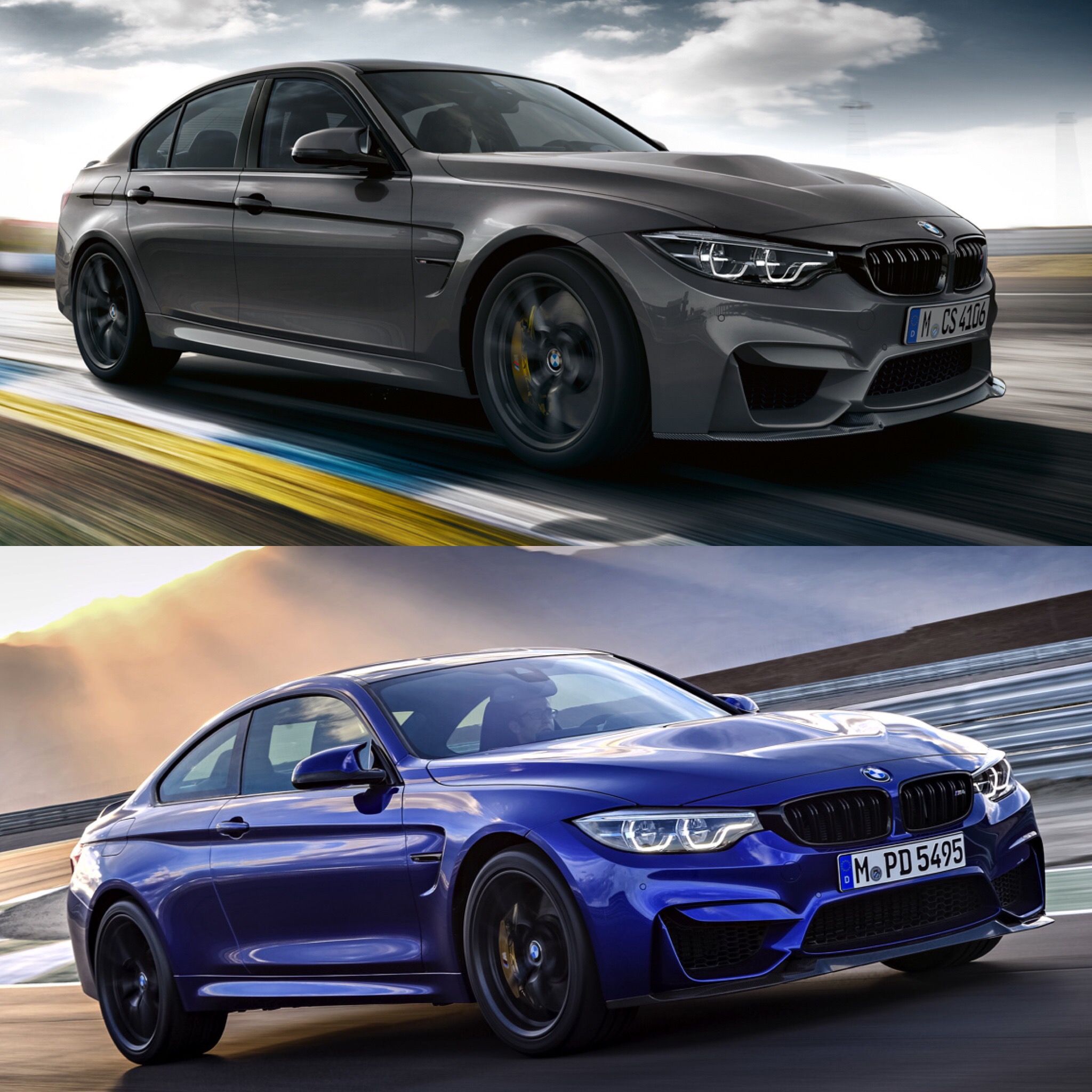 So the BMW M3 CS is finally here. We’ve been anticipating its arrival since we saw some spy photos of a more aggressive M3 puttering around Germany. With how good the BMW M4 CS is, we were very excited about the prospect of another CS variant, only this time with four doors. Now that we’ve seen it, we’re happy that it looks and seems as good as we hoped it would. Driving it will be another thing altogether but the M4 CS is pretty damn good, so we don’t expect anything different from the M3 CS.

Still, we haven’t yet driven either, so we can’t compare them in any other way than how they look. So let’s see how they compare side-by-side.

The BMW M4 CS is clearly the lower, sleeker and possibly prettier car of the two. Its svelte two-door coupe body style is the sexier of the two and it’s aided by all of its little carbon fiber bits and those gorgeous wheels. However, while the M4 CS is pretty and sleek, the M3 CS is brutish and angry. Its flared rear wheel arches, thanks to the 3 Series having a narrowing rear wheel track than the 4 Series, makes it seem more muscular and more violent. While it’s not as pretty, so some eyes (these two), the M3’s brutish charm makes it the cooler looking car. 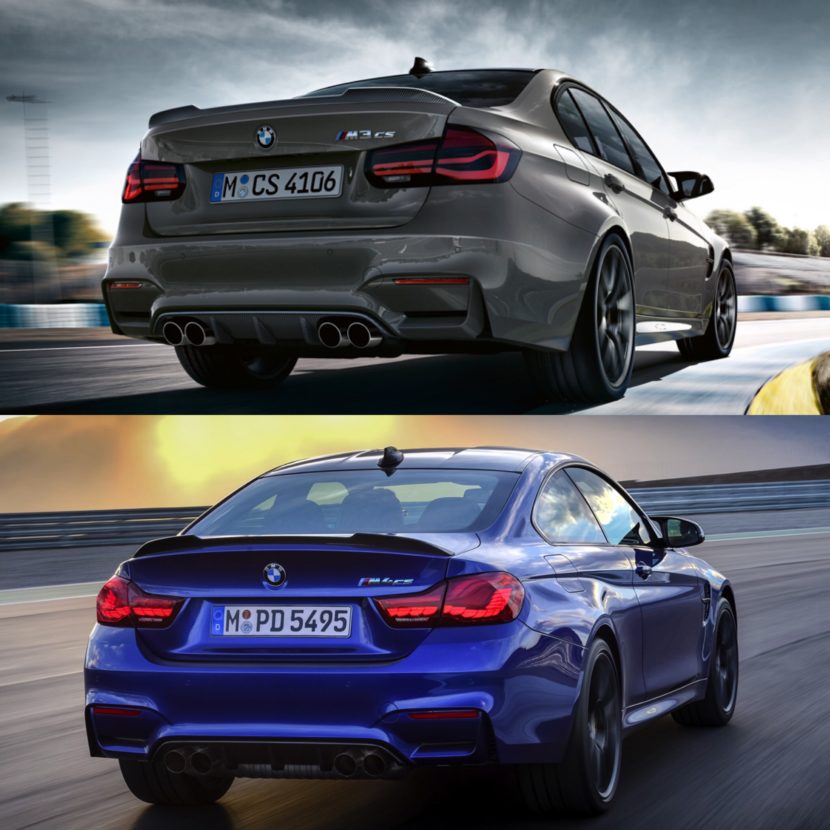 Out back, the BMW M4 CS gets the same sexy OLED taillights as the M4 GTS. They look fantastic, especially against the San Marino Blue paintwork, and much better than the standard LED taillights of the M3 CS. Though, from the rear you can see just how much more muscular the M3 CS looks, making it the tougher looking car. We do wish the M3 CS could get those OLED taillights, though, as they’re gorgeous.

Inside is where the two cars are most different. Whereas the M4 CS is more stripped down, using a ton of CFRP (Carbon Fiber Reinforced Plastic), the BMW M3 CS’ cabin is a bit more normal. The M4 CS has CFRP door panels with fabric straps for door pulls, whereas the M3 CS’ door panels are trimmed in contrast-stitched leather. The former look cool, purposeful and special but the latter are likely a lot better to live with. The M3 CS also gets BMW M-colored stitching on the steering wheel, while the M4 CS just has grey stitching. The M3 CS also gets two-tone Silverstone/Black leather interior, whereas the M4 CS’ seats are just black. 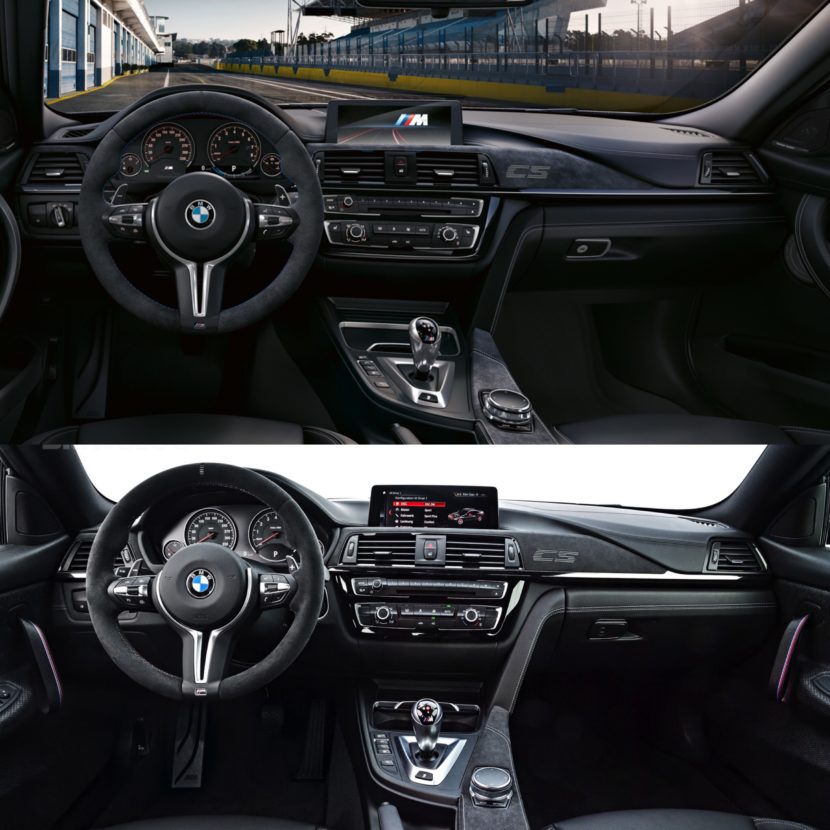 Overall, the choice between the two comes down to preference. To you prefer sleek, super-lightweight coupes or would you rather have a more well-rounded, more comfortable performance sedan? To be honest, it doesn’t matter, as the M4 CS is already sold out. So if you want a BMW CS and you don’t already have the M4 CS, you’re stuck with just the M3 CS. So we hope you like it better. 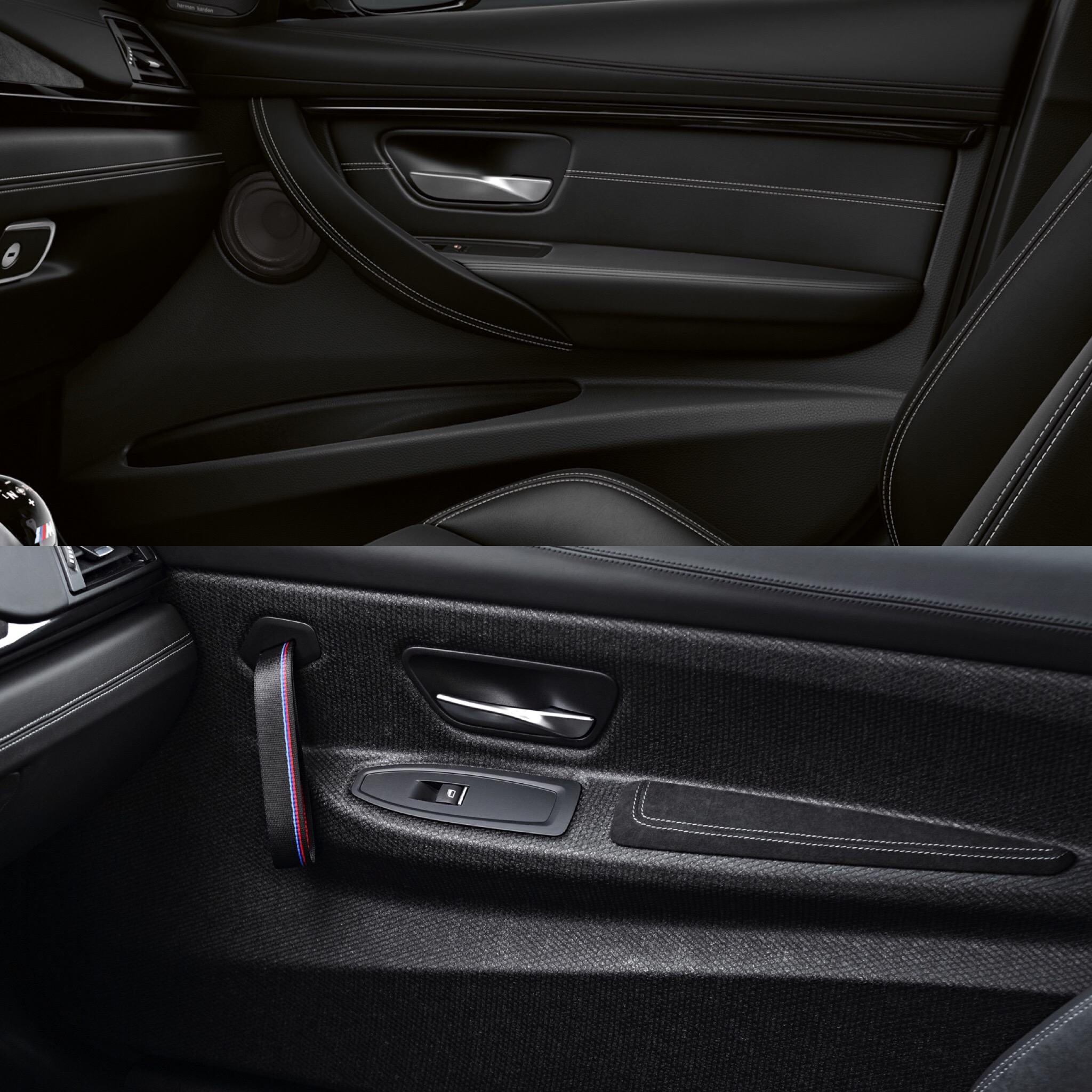 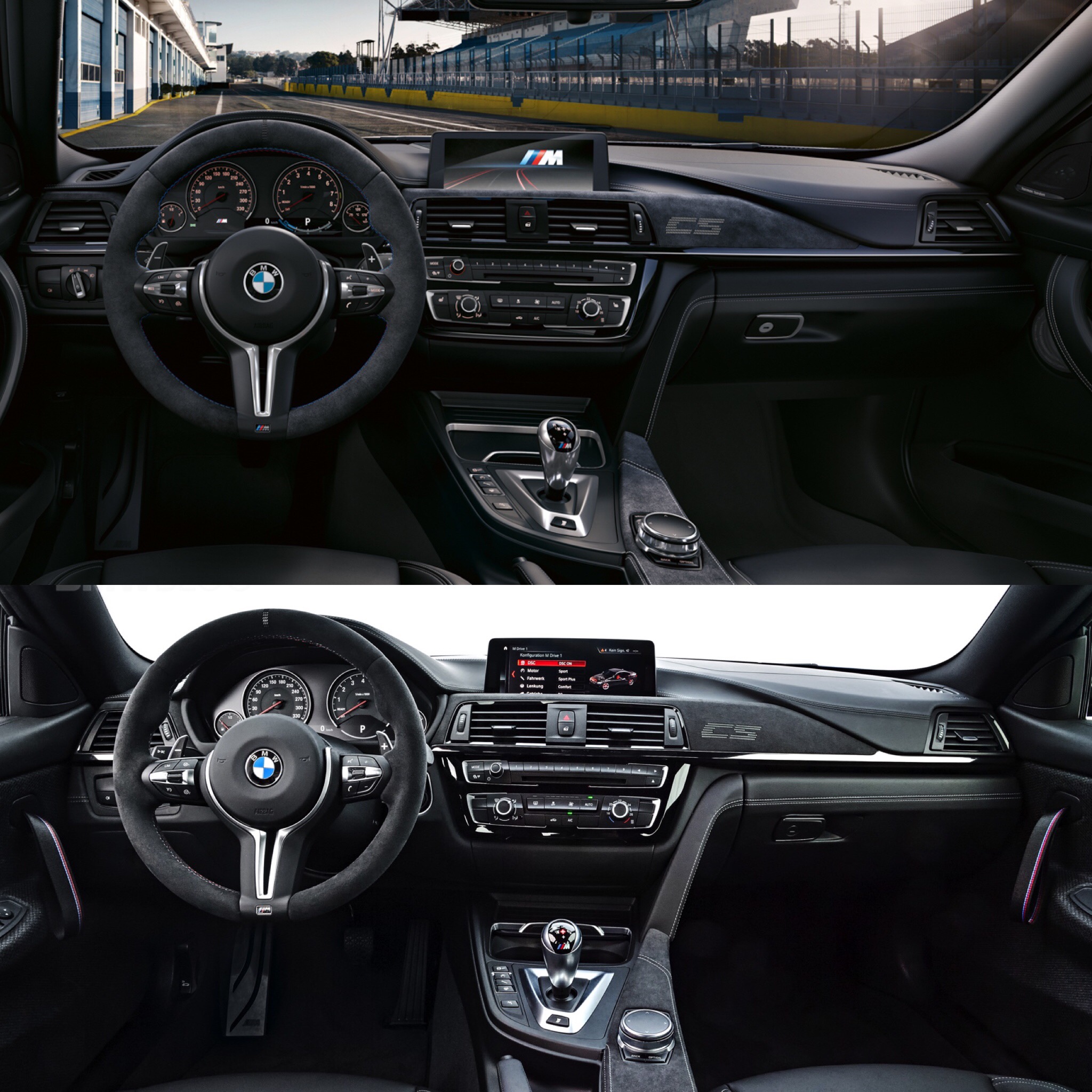 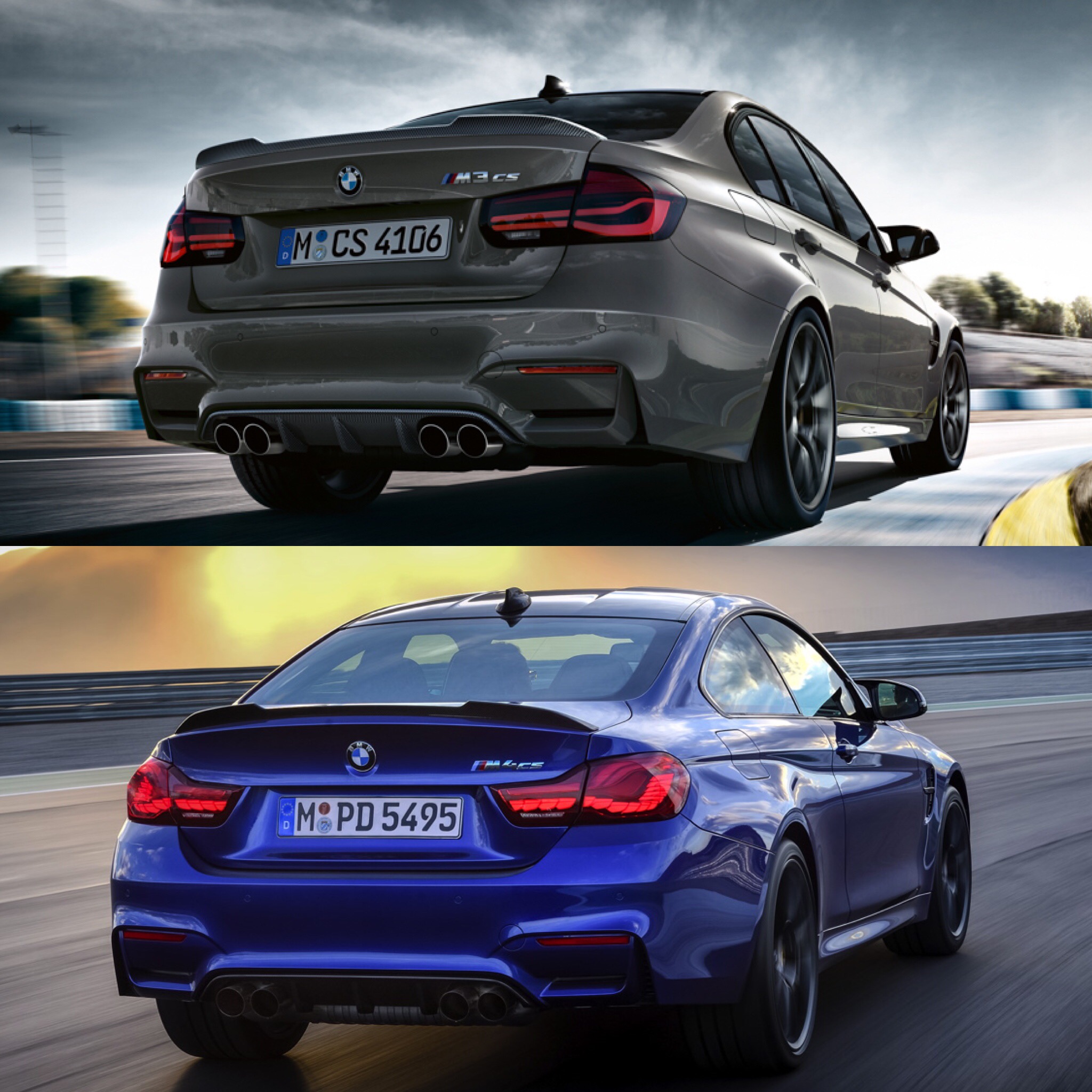