The BMW M5 is, and always has been, a great Autobahn monster. Since the first M535i, it has been an incredibly fast sedan and that’s what made it great and a memorable car in the first place. With forced induction coming along, what used to be a fast four-door sedan has now turned into a supercar killer, at least in a straight line. With some ECU tuning, one could even take on cars that were otherwise considered unreachable like, let’s say a Ferrari 458.

On paper, the two cars are miles apart in every single way. The F10 M5 is a heavy, four door sedan which can accommodate four adults in comfort and their luggage for a weekend in Saint Tropez easily whereas the Ferrari is a supercar with two seats and a boot over the front axle. In standard guise, there is one thing that’s similar and that’s horsepower. The Bimmer comes with the S63 4.4-liter twin-turbo V8 making 560 HP and 680 Nm (501 lb-ft) of torque. 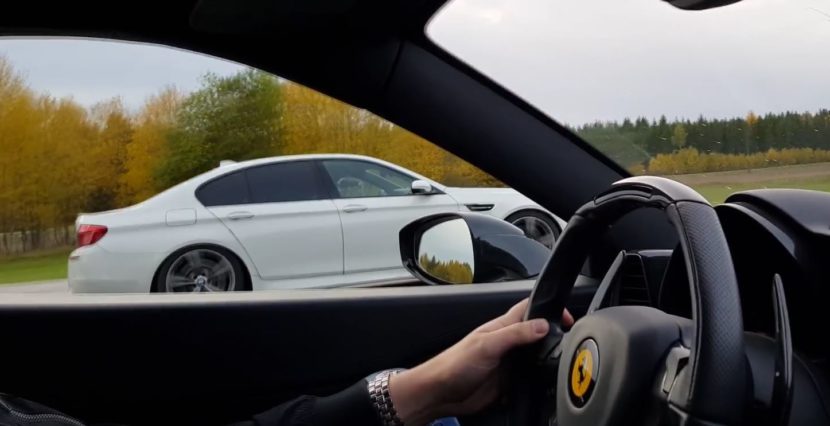 On the other hand, the Ferrari uses a 4.5-liter V8 but with not forced induction, revving into oblivion and making 570 HP and 540 Nm (398 lb-ft) of torque. It uses a 7-speed dual-clutch gearbox and sends all its power to the rear wheels, doing 62 mph from standstill in 3.4 seconds. The BMW M5 is almost 1 second slower but it is also about half a ton heavier. To fix that, the owner of the car in the video below tuned his car to make around 750 HP.

How, you ask? Well, according to the interview posted after the race, his ‘friend’ in Denmark did it and he didn’t change any of the mechanical components on the car except the exhaust. Now the car is sporting a titanium Akrapovic exhaust which handles the extra fumes from the the engine. Will the extra 190 HP be enough to compensate for the weight difference between the two cars? Only one way to find out.