MINI took the veils off its most recent concept today and, unlike the EV shown not long ago, this one seems to appeal to those wanting to push this little hatch to the absolute limit. The MINI John Cooper Works GP concept is the modern racing essence of a MINI according to the Brits and we certainly hope the production model will stay true to this motto. This wouldn’t be the first time the MINI brand showed a GP model, the same exercise being done back in 2006 and 2012.

Following in their footsteps, we’re guessing the production version of this concept will also be built in limited numbers and until we find out the exact specs of the beast and the number of customers that will get to take them home we’ll have to speculate. “The MINI John Cooper Works GP Concept is all about the unfettered feeling of driving and levels of performance found in motor sport competition,” said Peter Schwarzenbauer, Member of the Board of Management of BMW AG, responsible for MINI, Rolls-Royce and BMW Motorrad. “This is driving fun in its purest form.” 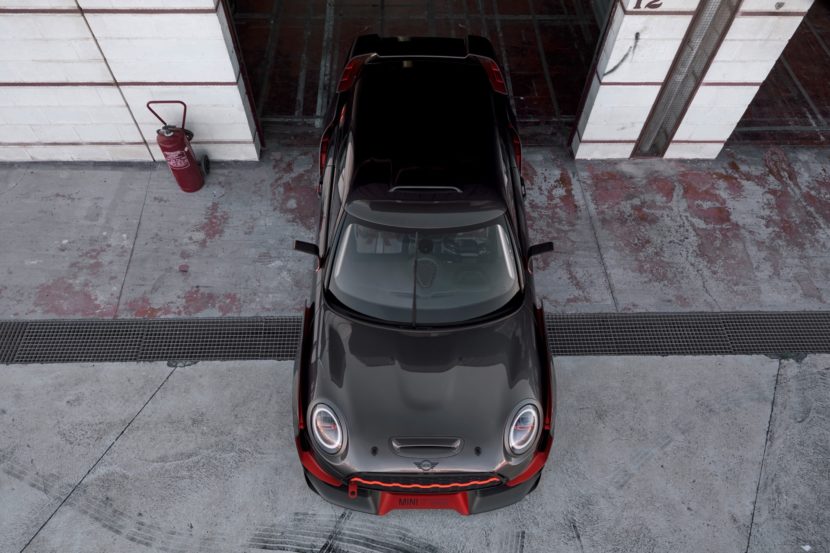 Judging by the way this thing looks in both pictures and on video, we’re completely sold already. Bound to make its first appearance at the Frankfurt Motor Show later this month, the crowd will definitely be enthralled by the John Cooper Works GP model. The design of the MINI John Cooper Works GP Concept focuses on purity and emotional richness. Significantly wider than the current MINI, it feels ready to devour tracks. Large front and rear aprons, side skirts and a prominent roof spoiler create a confident appearance. The use of lightweight materials such as carbon fiber optimizes the car’s power-to-weight ratio.

“If you know about MINI, you’ll be aware of the brand’s long and successful history in motor sport,” said Adrian van Hooydonk, Senior Vice President BMW Group Design. “The MINI John Cooper Works GP Concept brings together the full suite of defining MINI design features and showcases them at their sportiest and most exciting. What we’re looking at here is maximum performance, maximum MINI.” Let’s just hope that a lot of what we’re looking at here will also be leaving the assembly lines in Oxford.