DTM 2017: Glock and Spengler finish second and third in Hungary for BMW DTM 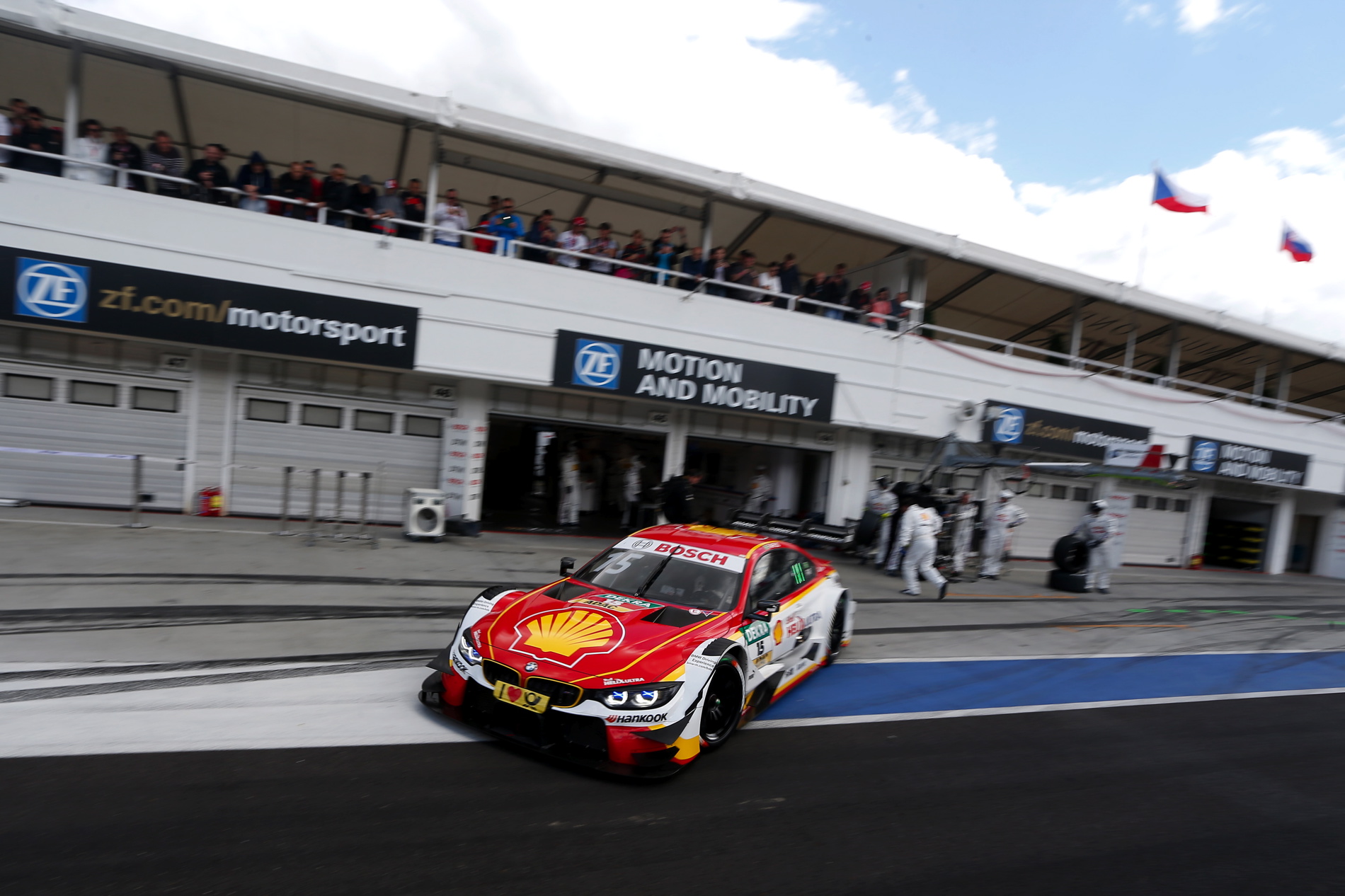 Timo Glock (GER) and Bruno Spengler (CAN) finished second and third in Saturday’s turbulent race at the Hungaroring (HUN) after a strong catch-up race, which saw them claim the third and fourth podiums of the season for BMW Motorsport. Both drivers benefitted from a daring strategy with early pit stops, which paid off after a safety car phase. Marco Wittmann (GER) in ninth also finished in the points. A collision forced Maxime Martin (BEL) and Tom Blomqvist (GBR) to retire. Augusto Farfus (BRA) was in fifth place when he was hit by a rival and the resulting spin saw him drop right down the field. 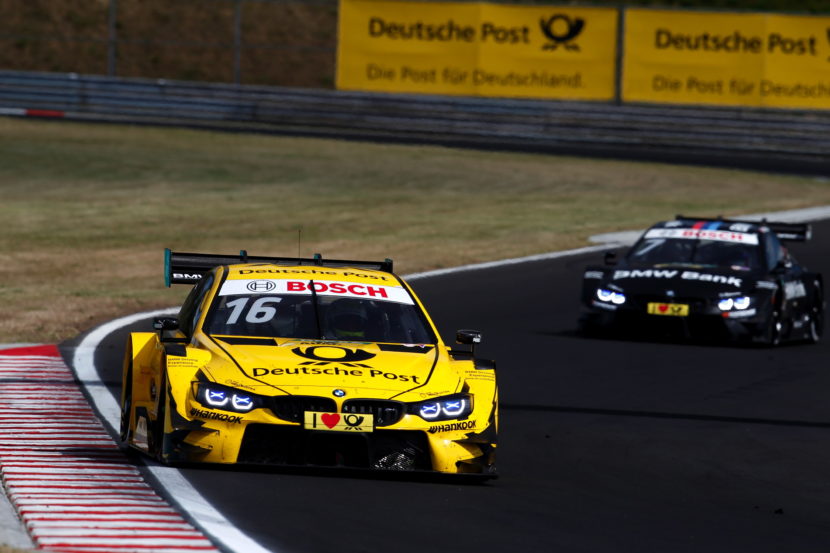 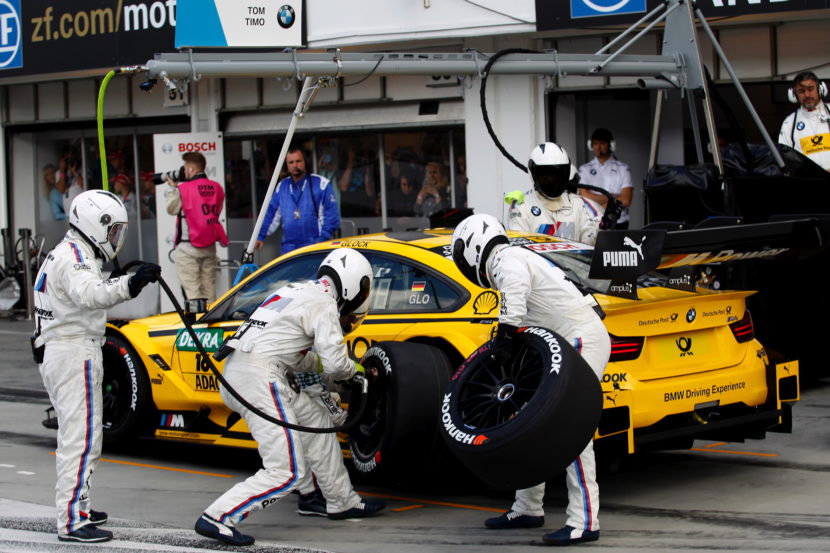 Augusto Farfus got off to a good start from sixth on the grid and moved up a place. In turn two, Maxime Martin collided with Tom Blomqvist. Blomqvist span and dropped down the field. Martin’s race came to an end a few laps later. His SAMSUNG BMW M4 DTM suffered damage in the collision at the start. Martin’s retirement brought about a safety car phase. Spengler and Glock decided to pit early and this daring strategy saw them gradually move up from the back of the field after the restart to finish on the podium. In contrast, Farfus was extremely unlucky when he was hit by a rival and span when the race was restarted on lap 11. This saw him drop right down the field. On lap 27, Blomqvist was forced to return his car that was damaged in the collision at the start to the pit and end his race early. On the final laps, Spengler emerged victorious in the hard but fair duel with Mike Rockenfeller (GER, Audi) for the podium. Marco Wittmann in ninth also finished in the points. The win went to Paul di Resta (GBR, Mercedes). 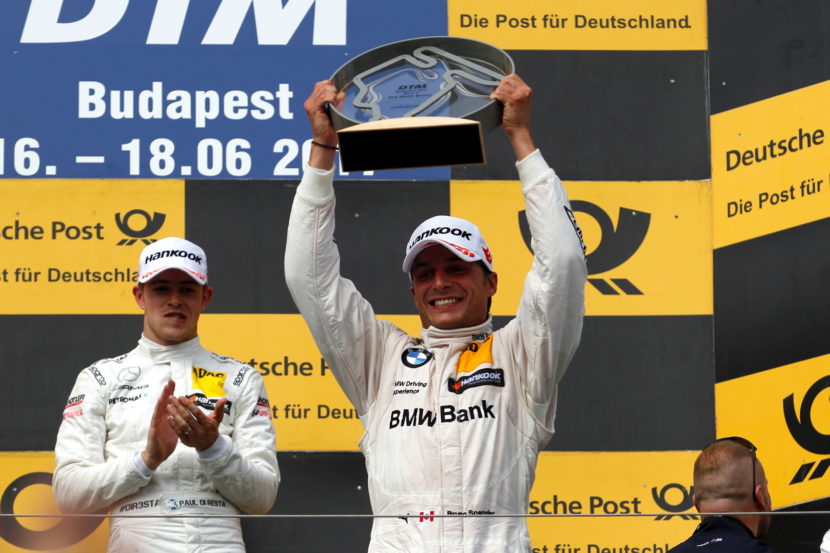 BMW Motorsport Director Jens Marquardt: “Two podiums in these circumstances is an incredible result. We decided on an early pit stop strategy for Timo Glock and Bruno Spengler. Initially it looked like it would be an incredibly difficult race for us after the incident with Maxime Martin and Tom Blomqvist. But then we were lucky with the safety car phase, which ultimately saw Timo and Bruno’s daring strategy pay off. Congratulations to both drivers and the teams on a fantastic performance. We’re happy with these points, even though we know that we have work to do tomorrow in terms of our performance in qualifying and consistency in the race. I feel incredibly sorry for Augusto Farfus, who was doing well in the race, but was hit hard and turned round by a rival. Congratulations to Mercedes and Paul di Resta on the win.”

Stefan Reinhold (team principal, BMW Team RMG): “The strategist was in the car today. Timo was unable to pass Di Resta, so he made the right decision to pit. It showed just how much experience he has. The stop went well and the safety car that followed saved our race. Maybe we could have brought Marco in even earlier, but that’s motorsport for you, it isn’t a lottery.”

Marco Wittmann (#11, Red Bull BMW M4 DTM – Grid position: 15th, race result: 9th place – 61 races, 8 wins, 16 podiums, 8 pole positions, 543 points, 2 Drivers’ titles): “Overall the race went well. I made up six places and picked up two points. On the other hand, with a little more luck, we might have been able to get a little more out of it, as we saw with Timo and Bruno. I stayed out a little too long and then the safety car was brought out, but all in all I am happy with the two points.”

Augusto Farfus (#15, Shell BMW M4 DTM – Grid position: 6th, race result: 12th place – 71 races, 4 wins, 12 podiums, 5 pole positions, 345 points): “The weekend got off to a great start. Then came the safety car and I was spun round on the restart. Overall, we had a good pace in the race and the car performed well. It could have been a good race, which makes us hopeful for tomorrow. I just need to look ahead now.”

Timo Glock (#16, DEUTSCHE POST BMW M4 DTM – Grid position: 14th, race result: 2nd place – 61 races, 3 wins, 7 podiums, 2 pole positions, 256 points): “We didn’t expect to move up from 14th on the grid into second place today. No doubt it would have been difficult in normal circumstances. I wasn’t able to pass Marco at the start. I knew I was able to keep up with the pace, which is why I decided to stop. I didn’t have anything to lose. I was fortunate that the safety car came out two laps later and then, when it became clear that only Paul, Bruno and I had stopped, it seemed likely that I could be in with the chance of a podium. I am really happy with second place, but we are well aware that we need to improve in terms of speed in the second race.”

Bart Mampaey (team principal, BMW Team RBM): “Regarding Bruno, I think that the car had more potential in qualifying than we showed. Our strategy in the race was just right. Bruno did a fantastic job and defended extremely well against Rockenfeller. I am delighted for the entire team. There were incidents with the other two cars, which we will look at again in more detail later so that we can fight back tomorrow. We were able to pick up valuable points today with the one car. We want to improve on that tomorrow.”

Bruno Spengler (#7, BMW Bank BMW M4 DTM – Grid position: 17th, race result: 3rd place – 144 races, 14 wins, 46 podiums, 17 pole positions, 775 points, 1 Drivers’ title): “That was a tough race, in which we were also a bit lucky. But we had a great strategy. It was a fantastic performance from my team, taking the risk of stopping a second time in the safety car phase. But it was necessary since I had stopped on the very first lap and it would have been very difficult to finish the race without stopping. A big thank you to the team for their courage and the good pit stops. It was very difficult to defend against Mike Rockenfeller at the end. He put me under a lot of pressure, but I gave it my all to bring home the podium for the entire team.”

Tom Blomqvist (#31, BMW Driving Experience M4 DTM – Grid position: 10th, race result: retired – 41 races, 1 win, 5 podiums, 1 pole position, 174 points): “I was hit immediately after the start and dropped right down the field, that was the end of my race. I’m very disappointed that it happened to me yet again. I have been turned three times in the five races of the season so far. I returned to the pit since there was no point in me carrying on with the race. The car was badly damaged and didn’t have any handling left.”

Maxime Martin (#36, SAMSUNG BMW M4 DTM – Grid position: 12th, race result: retired – 51 races, 2 wins, 6 podiums, 2 pole positions, 248 points): “I made contact with Tom in turn two, which was my fault. The front of the car was damaged as a result. It was probably this damage that led to my brakes blocking later on. After that, I was unable to keep going. It’s a real shame, but it was my error. 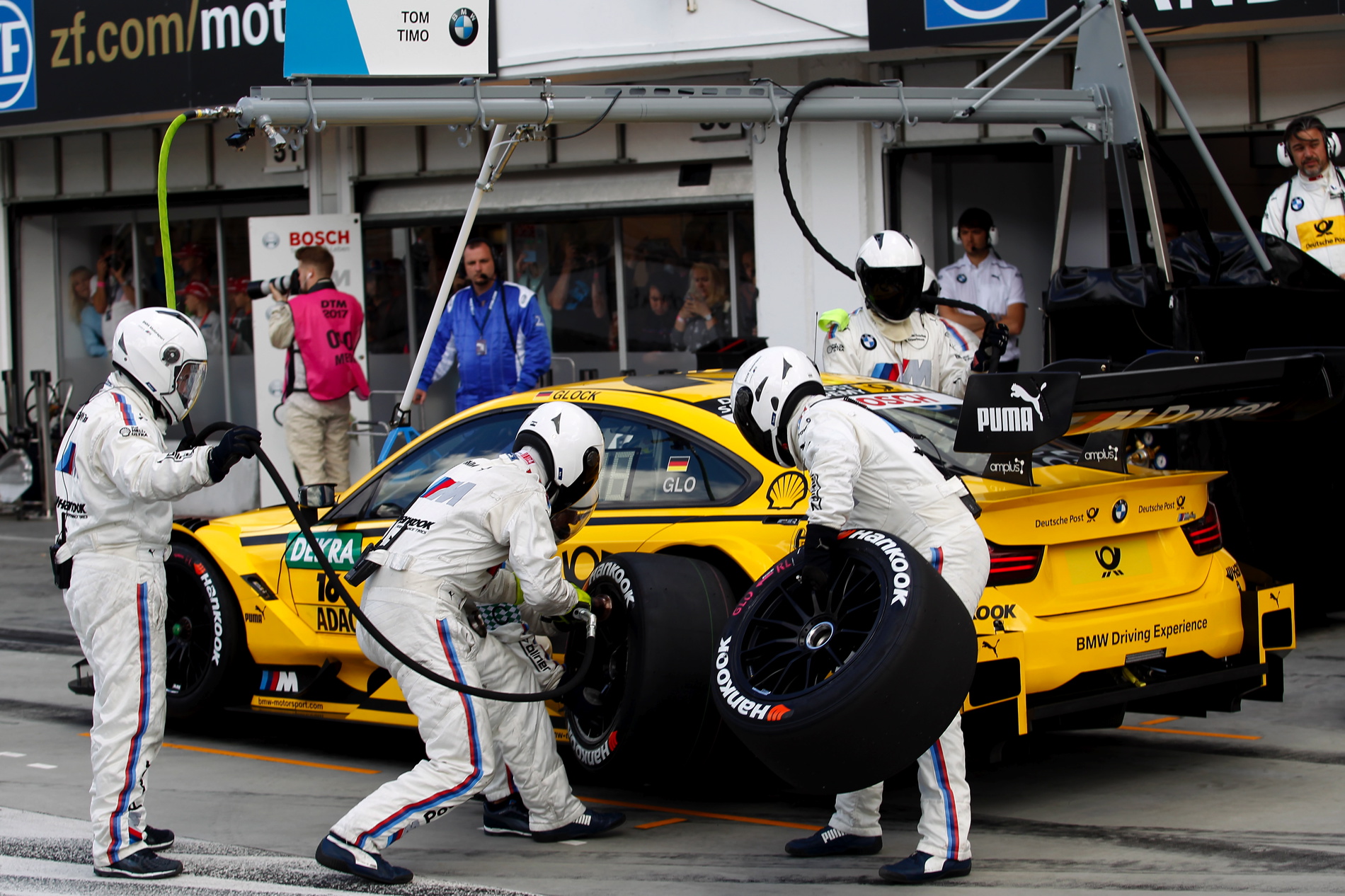 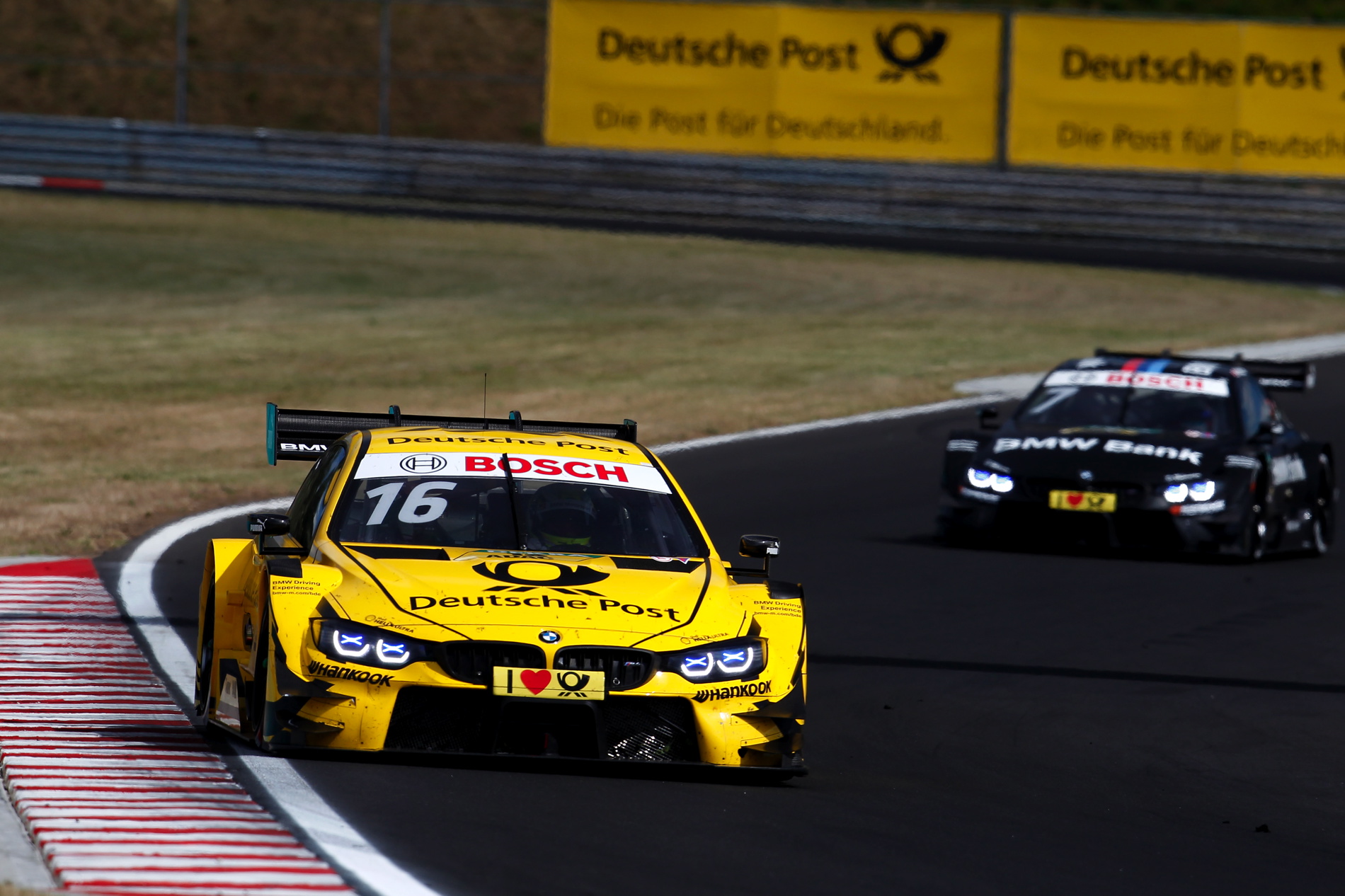 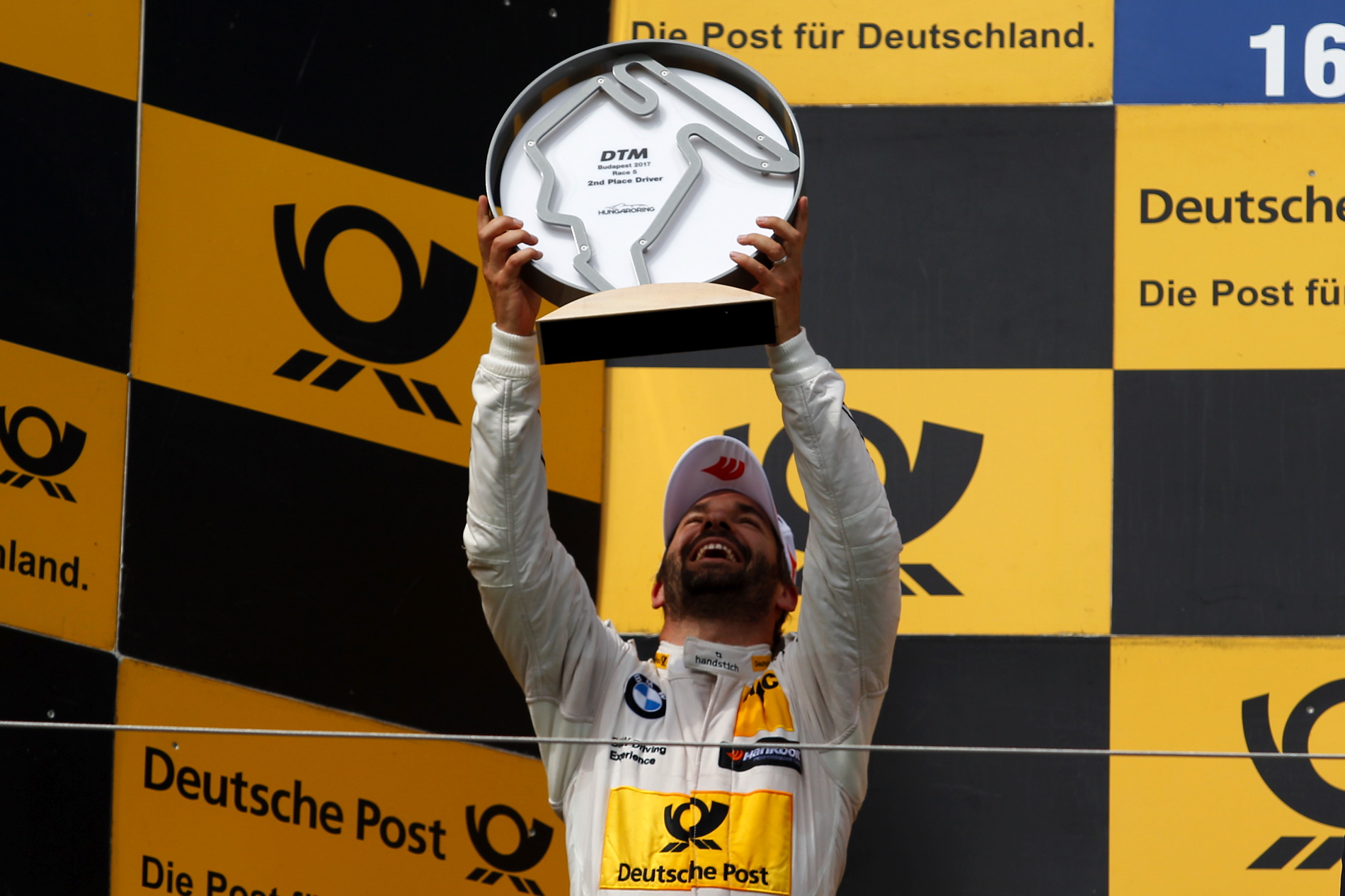 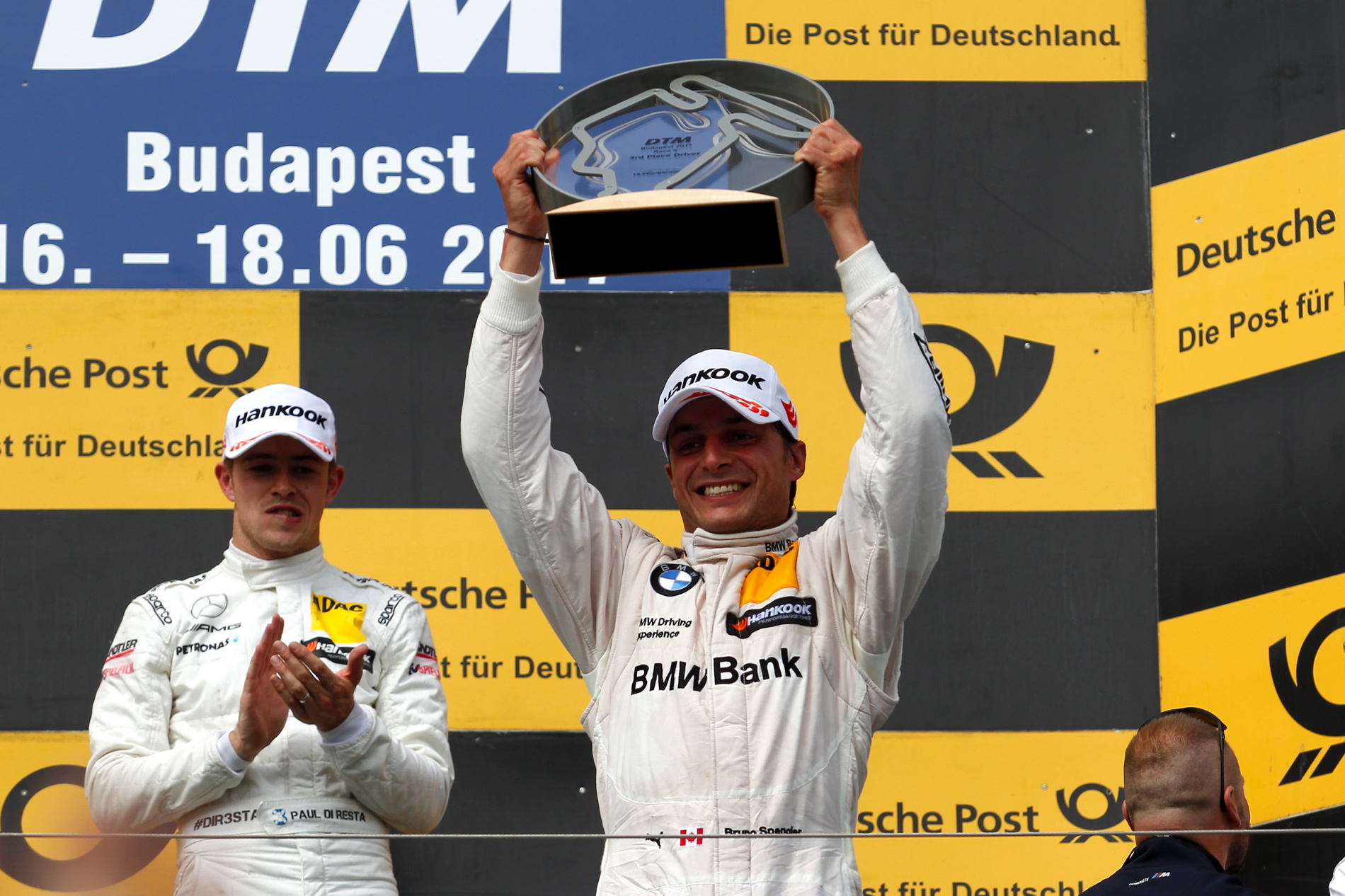 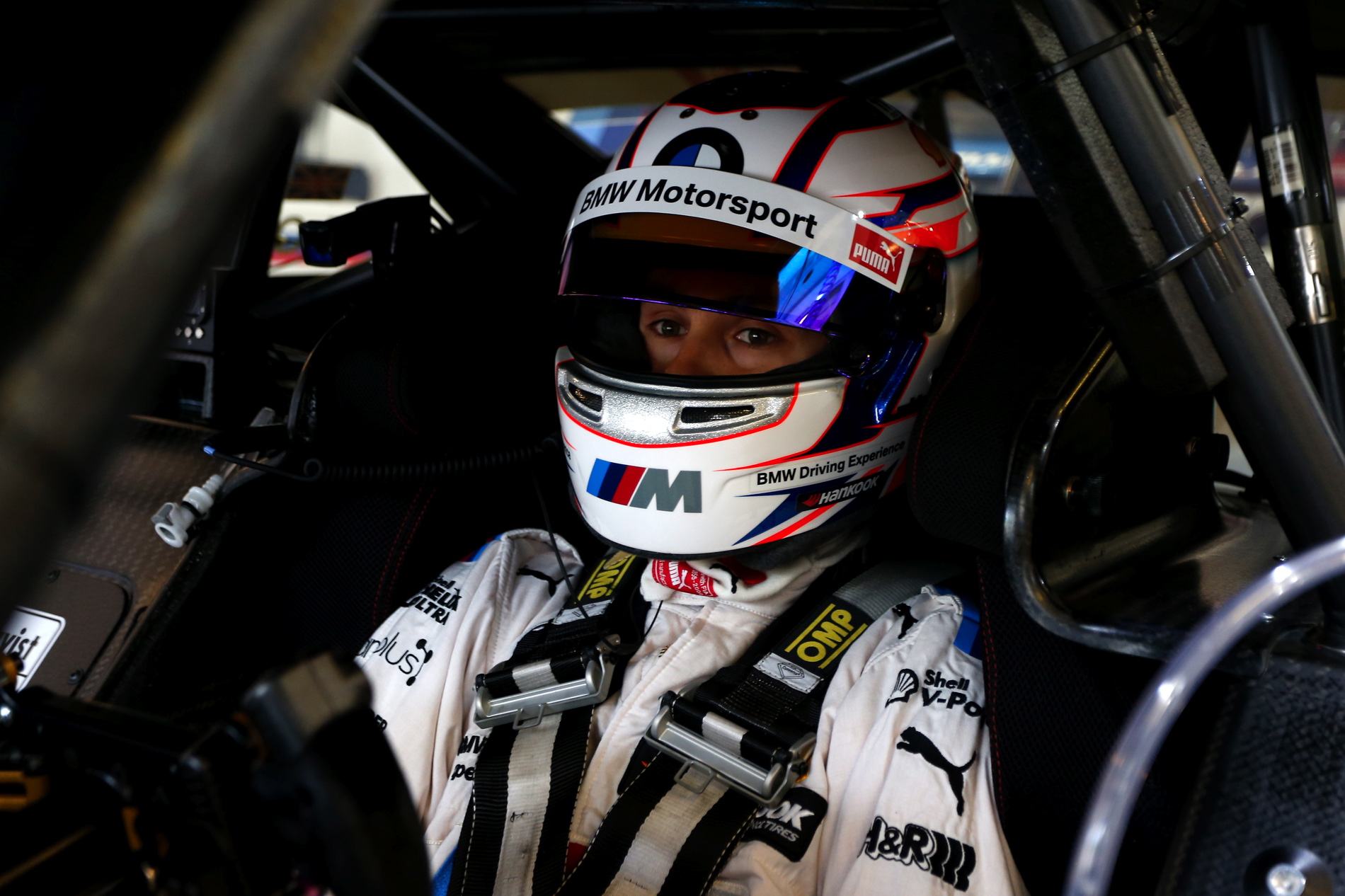 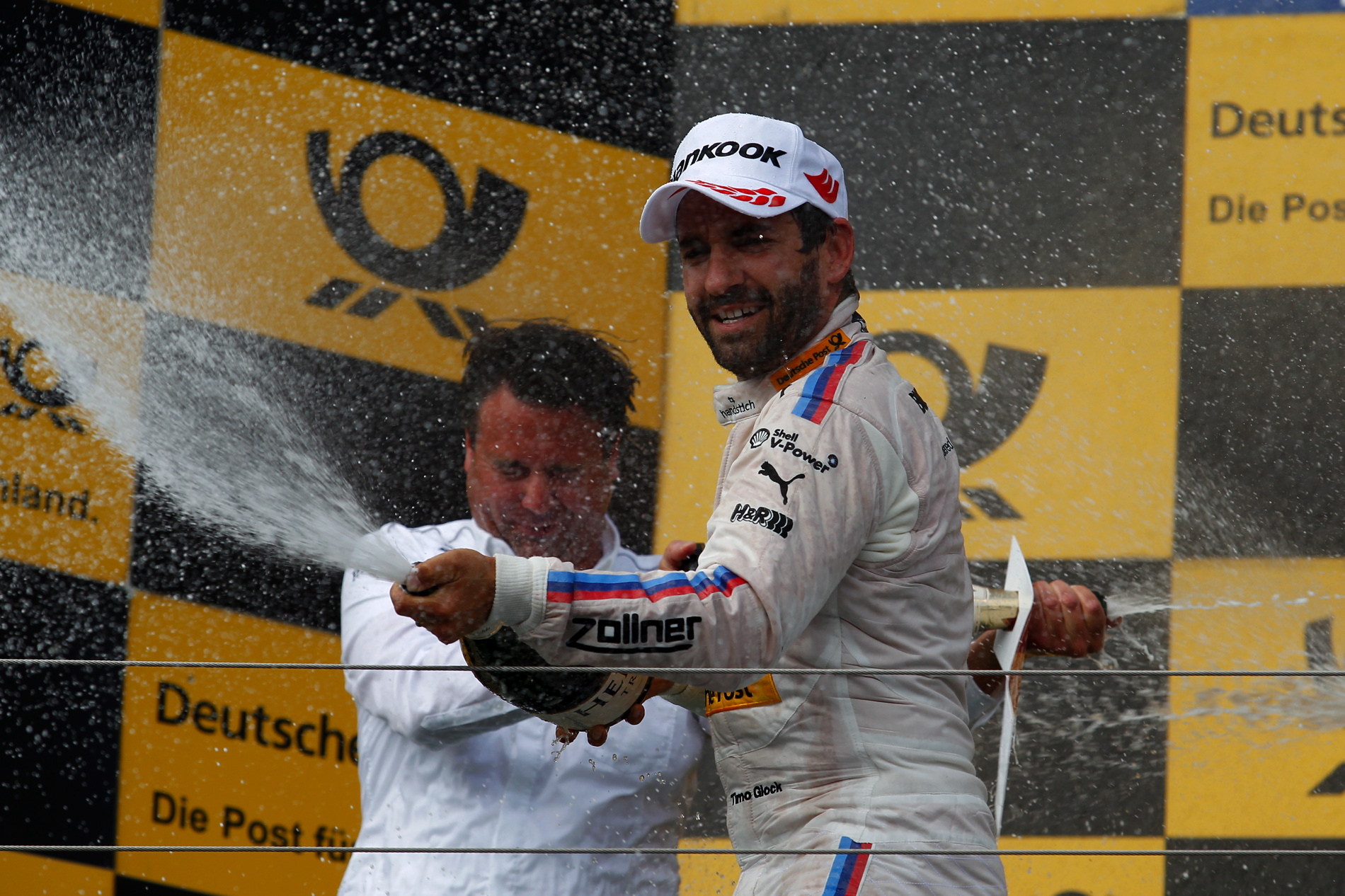 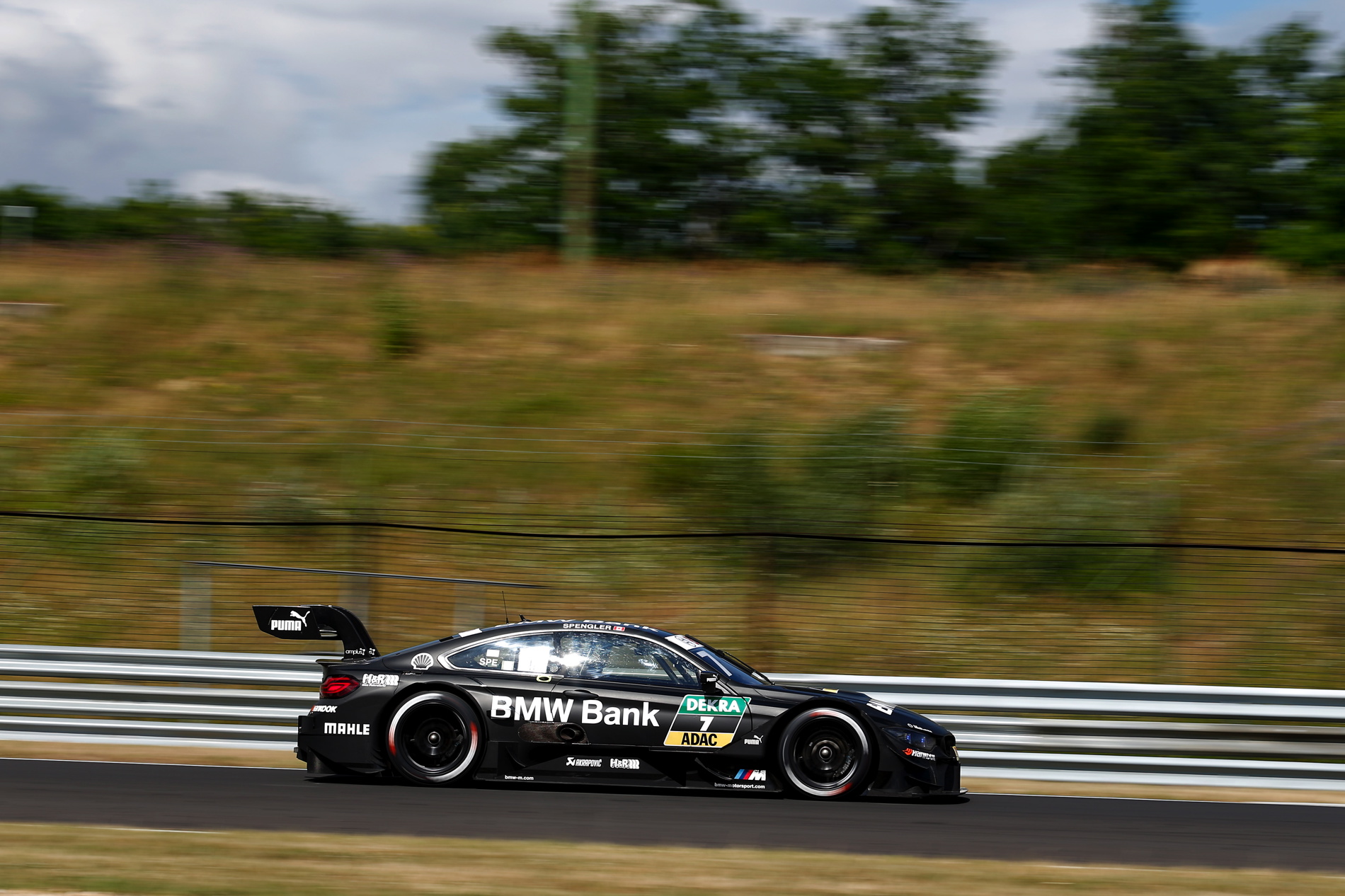 3 responses to “DTM 2017: Glock and Spengler finish second and third in Hungary for BMW DTM”