This current-generation BMW Z4 feels like the oldest car in the world at the moment. I’m pretty sure there are cave drawings of it somewhere in Bavaria, along with the cave-drawn blueprints for the wheel and fire. Despite its age, though, it’s still a car with charm. Its classic roadster styling, funky folding hardtop and fun-to-drive dynamics make it a car that BMW enthusiasts still appreciate. However, it’s time for something new and its successor has just been spotted at the world’s most famous race track.

A recent spy video has emerged of the new BMW Z4 taking to the Nurburgring, doing some testing. I say spy video, but it’s really just a spy clip of the don’t-blink-or-you’ll-miss-it variety. However, we do get to see it moving pretty quickly and it seems to be a nimble little car. As it maneuvers through a series of turns, it looks pretty tight, kissing the apex and firing out with little drama and little body roll. It seems to change direction pretty easily with maybe only a bit of understeer for a car with such a long nose. 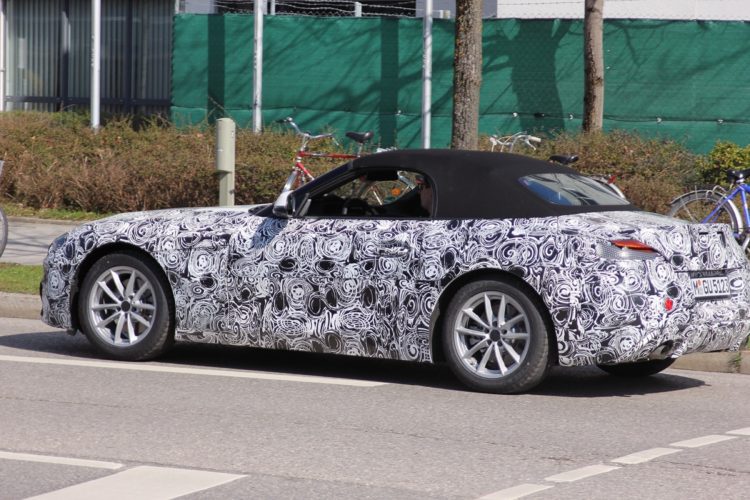 I really like the proportions of this car, as they seem largely unchanged from its predecessor. The long hood, really short rear deck and seating position almost over the rear axle all give it classic roadster styling. But my favorite bit is the soft-top roof. Not only does the soft-top look classier than the hardtop but it’s significantly lighter. So not only does it reduce weight but it lowers the center of gravity, which should increase handling. Being that the old Z4 is still pretty fun to scoot around, this new Z4 should be a blast.

There’s also a video of the Toyota Supra at the Nurburgring as well. As you might already know, the upcoming Supra is the non-identical twin of the BMW Z4. BMW and Toyota partnered to develop a joint sports car and the Z4/Supra are the fruits of their labor. One thing to note about the Supra is that it sounds good. It has a snarly six-cylinder noise that sounds rather good. Hopefully, the Z4 has a similar noise in its M40i trim.

Check the videos out and take a look at the upcoming BMW Z4 and Toyota Supra.