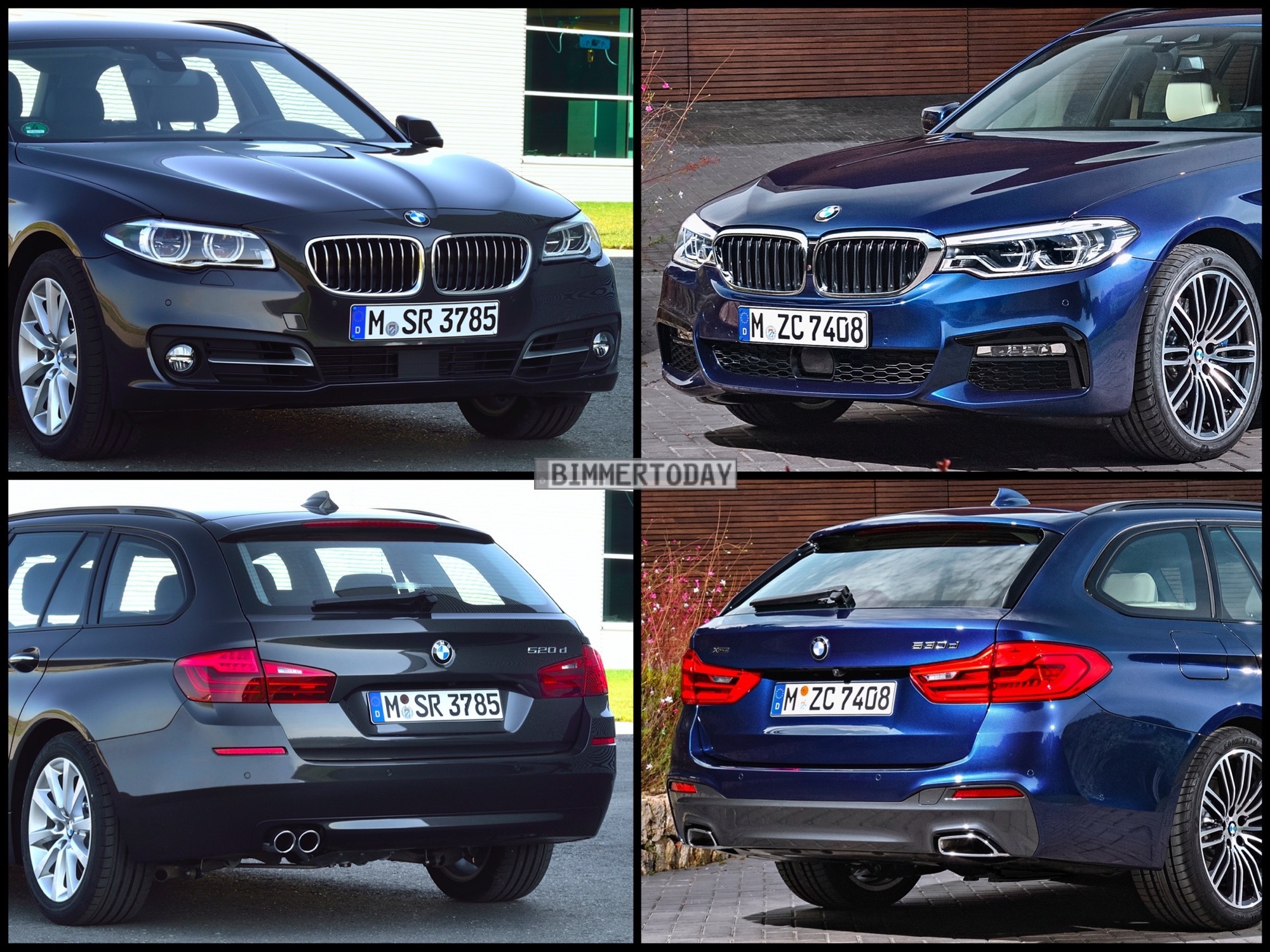 One of the toughest opponents of the new BMW G31 5 Series Touring comes from its own ranks, because, of course, the new premium touring has to convince many drivers of the predecessor to change to the newest generation. Most of the photos published so far show the new model with the M Sport Package, therefore we don’t have any suitable comparative photos, but we can at least look at the overall design of the two models.

One of the most striking changes in design is the direct connection between the kidneys and headlights, which makes the 2017 BMW 5 Series Touring even wider and sturdier. The innovations on the side view and at the rear of the new touring are less noticeable and evolutionary, but our image comparison makes the essential updates quickly recognizable. 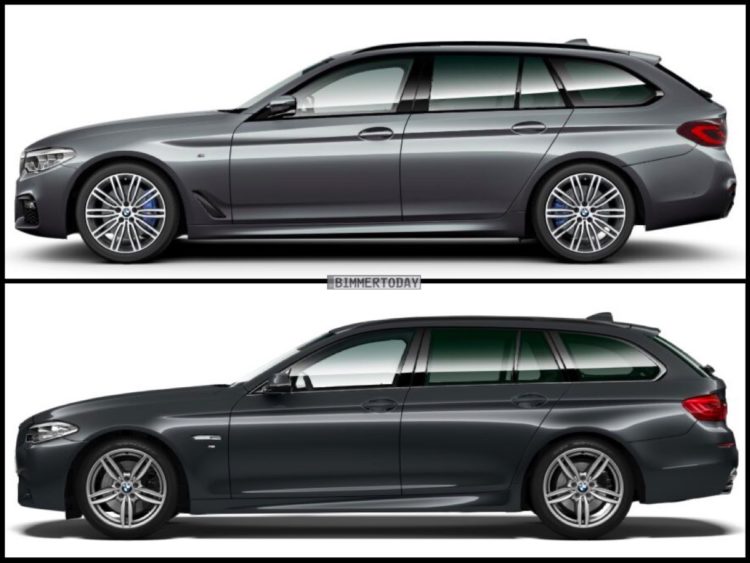 Although the BMW G31 5 Series Touring is 36 millimeters longer, 8 millimeters wider and 10 millimeters higher compared to its predecessor, the weight was significantly reduced. Depending on the engine, the weight of the now over 4.94 meter long touring went down by up to 100 kilograms, of which benefit driving dynamics and efficiency. The lightest model for the market launch in June 2017 is the BMW 530i Touring with a supercharged four-cylinder petrol engine, bringing a weight of 1,640 kilograms. 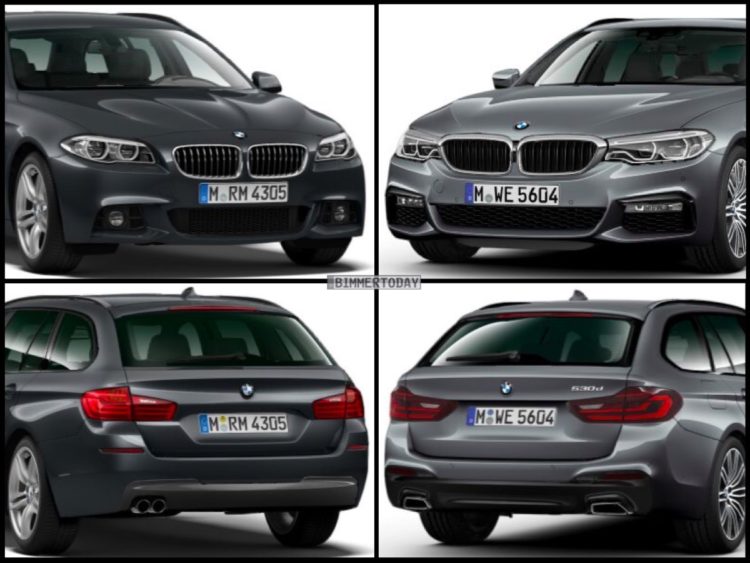 The larger dimensions set the foundation for an even larger and, above all, somewhat more versatile luggage compartment. The trunk volume grows to 570 – 1,700 liters and its permissible load by up to 120 kilograms, depending on the model variant (to 720 – 730 kilograms).

The G31 5 Series Touring also offers great advances in comparison to its predecessor in the areas of infotainment and driving assistance. Of course, the latest iDrive generation with touch screen, tile optics, gesture control and even improved networking connectivity are used in the new edition. 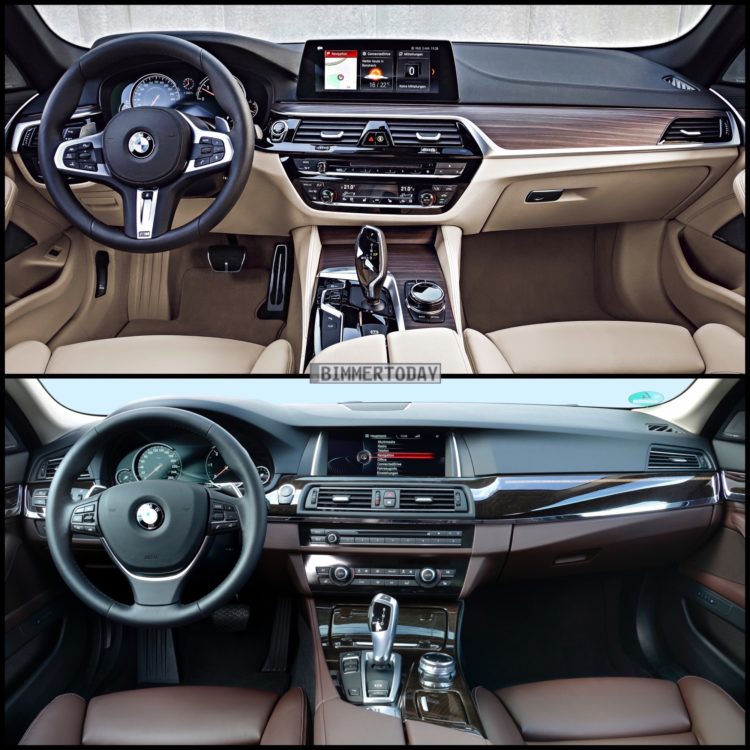 The Head-Up display with 70 percent larger projection area, the possibility of inductive charging according to capable smartphones, the WLAN hotspot for up to ten mobile devices, the integration of Apple CarPlay and many further detail improvements speak in this area for the G31.

The more powerful assistance systems also enable the new touring to drive the car as a whole: at speeds of up to 210 km / h, the BMW 5 Series Touring can independently take over the steering for a few seconds and provide the driver with a short time-out. Even more comprehensive than before, systems such as the Lane Keeping Assist with active side collision protection are optimally utilized by every adjacent centimeter of roadway width in narrow highway construction sites. 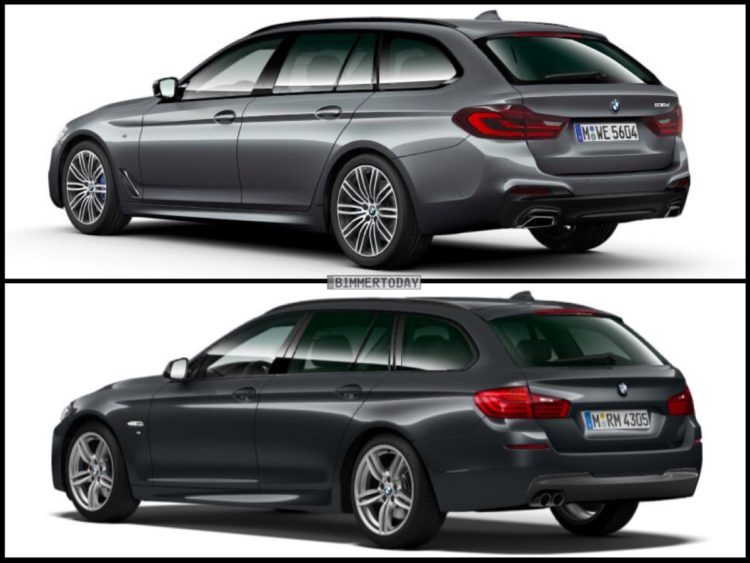 Even if the G31 can drive autonomously in many situations, the joy of driving remains the focus. The integral steering system and the M sports suspension can now also be combined with the all-wheel drive. In general, newly developed chassis components and the reduced weight ensure a much more agile driving feel.

The larger spread of the adaptive chassis, the further improved driving performance and the consumption reduced by up to 11 percent provide further arguments for the new edition. 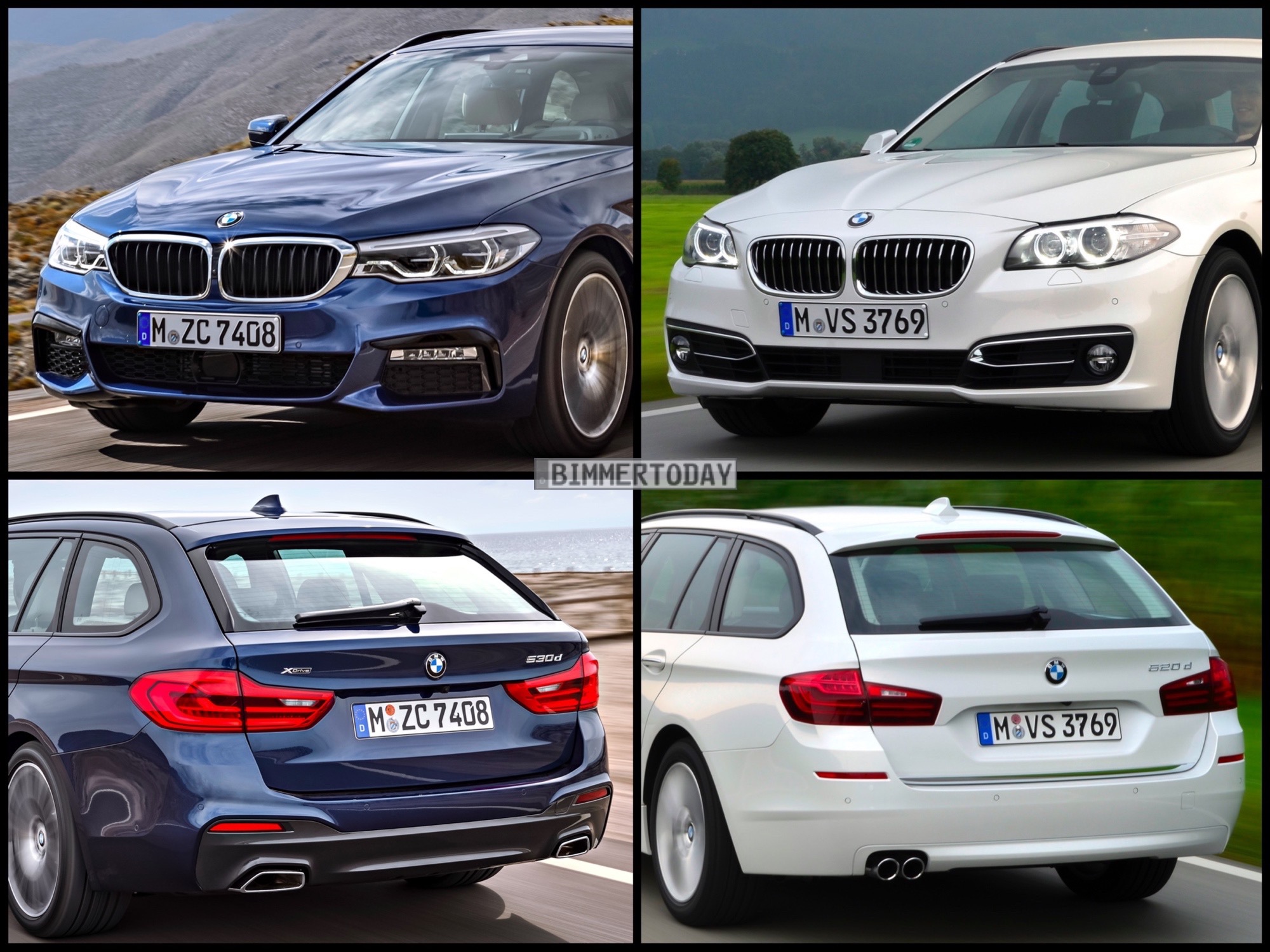 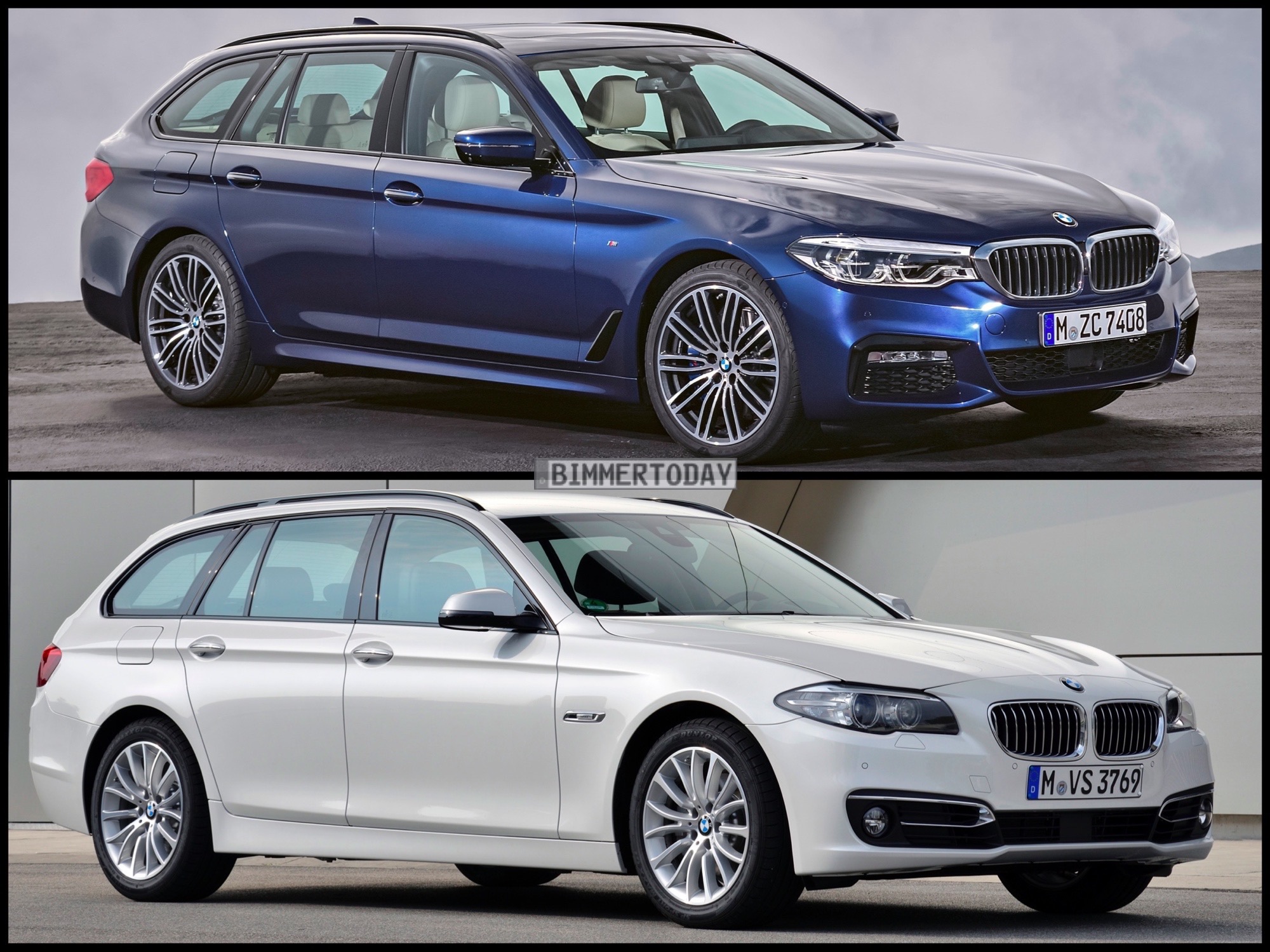 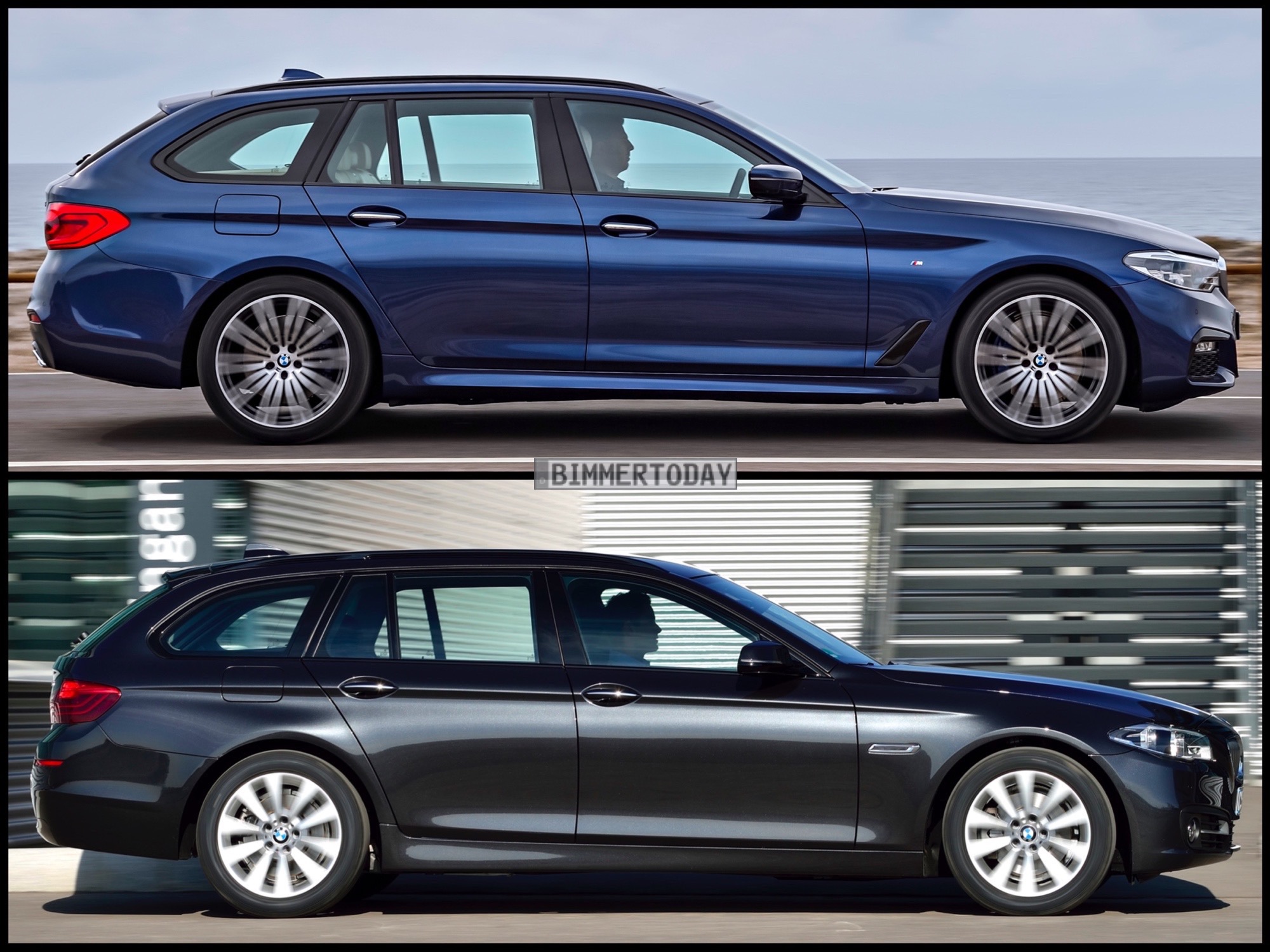 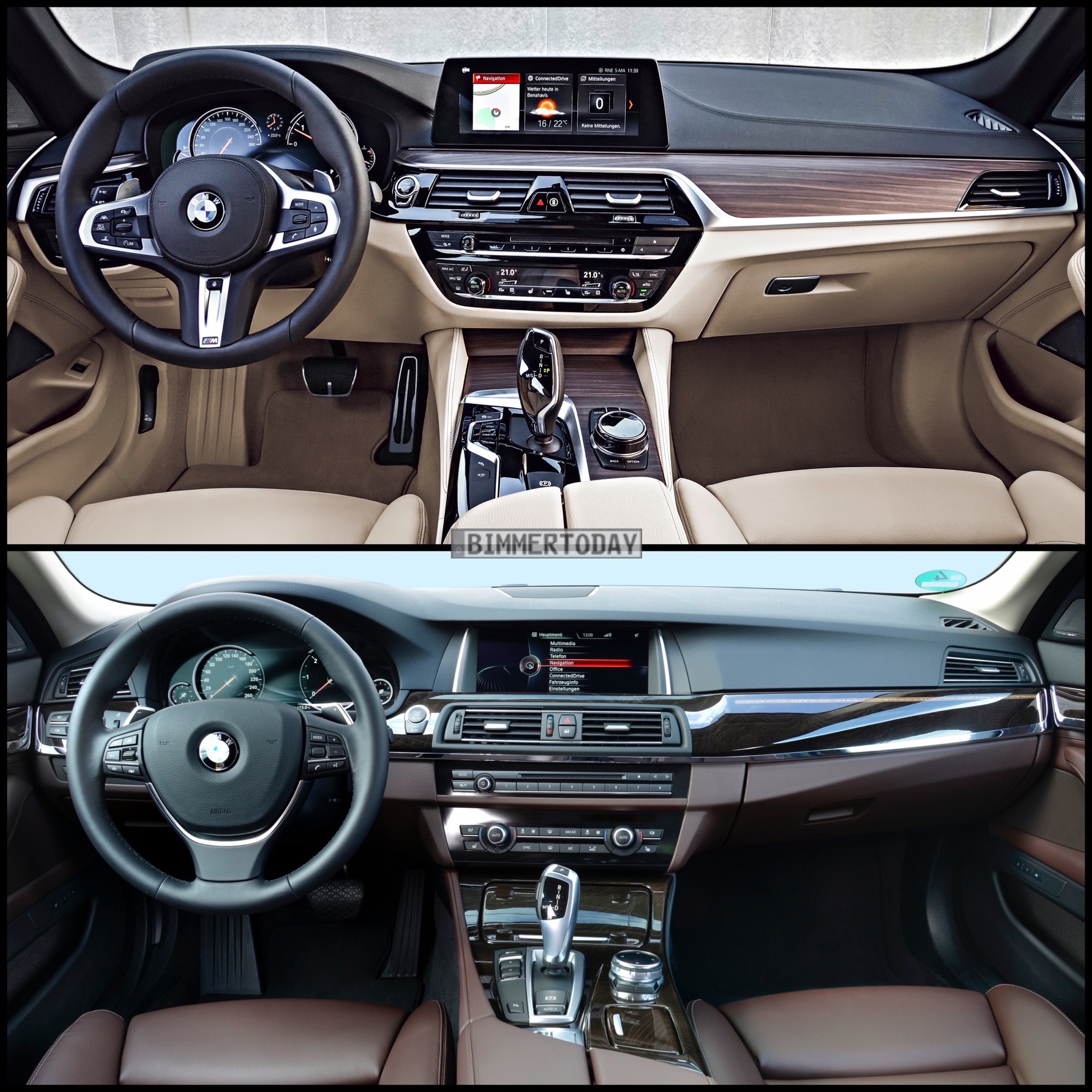 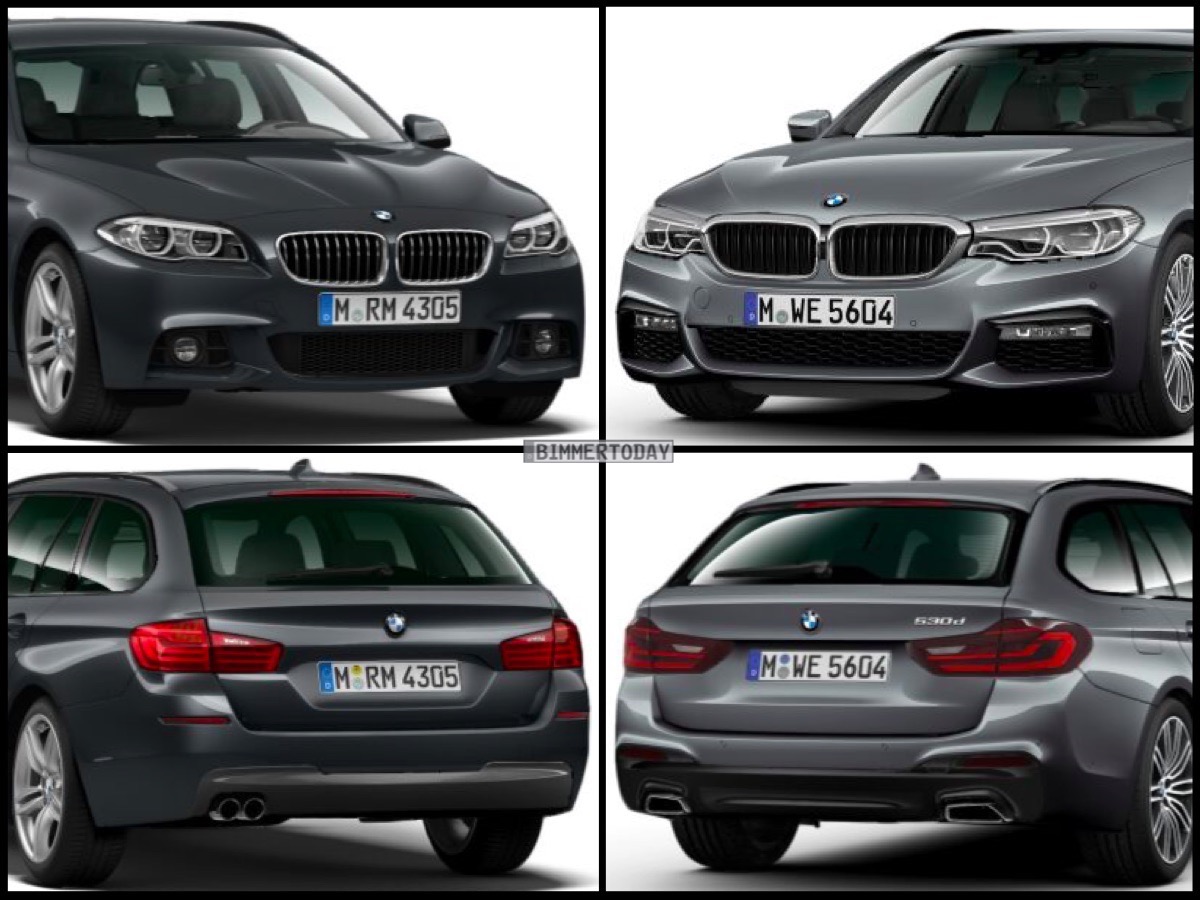 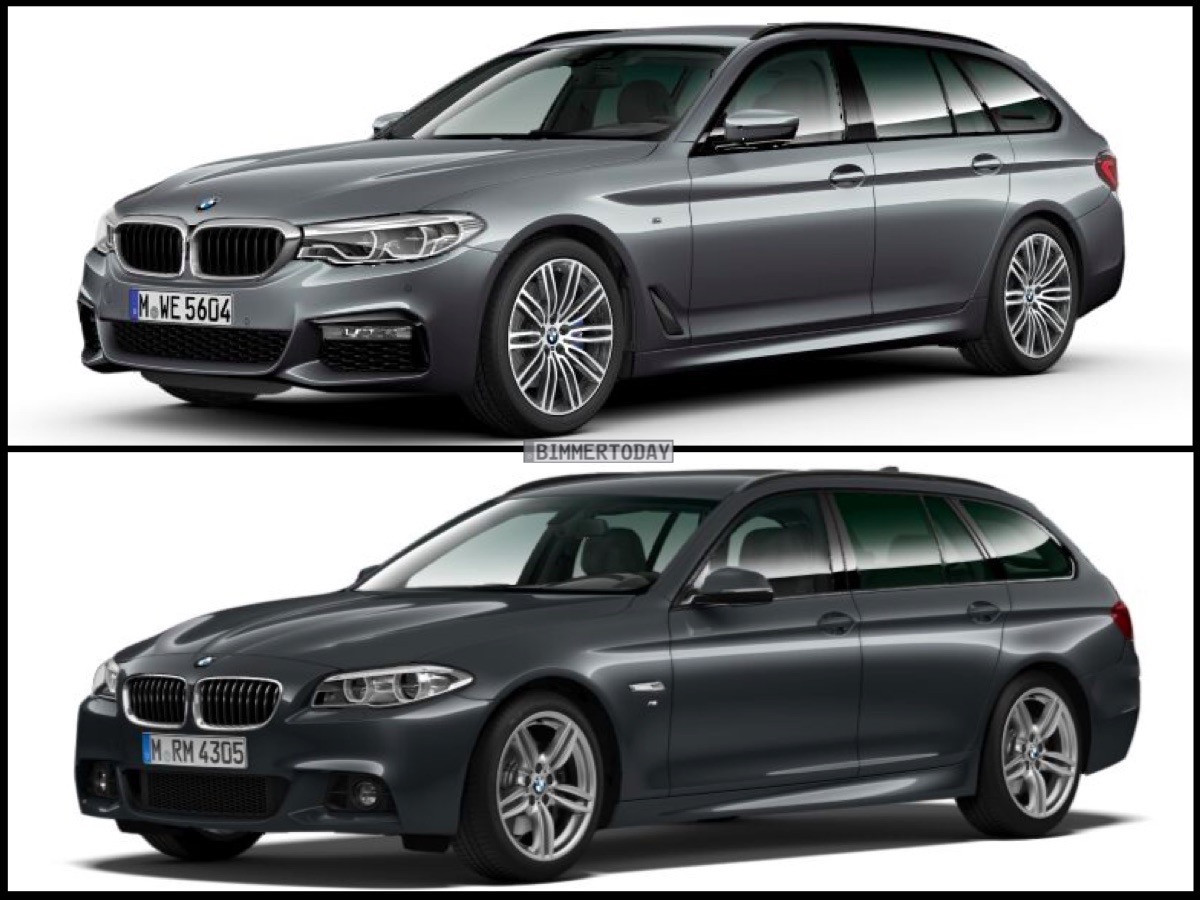 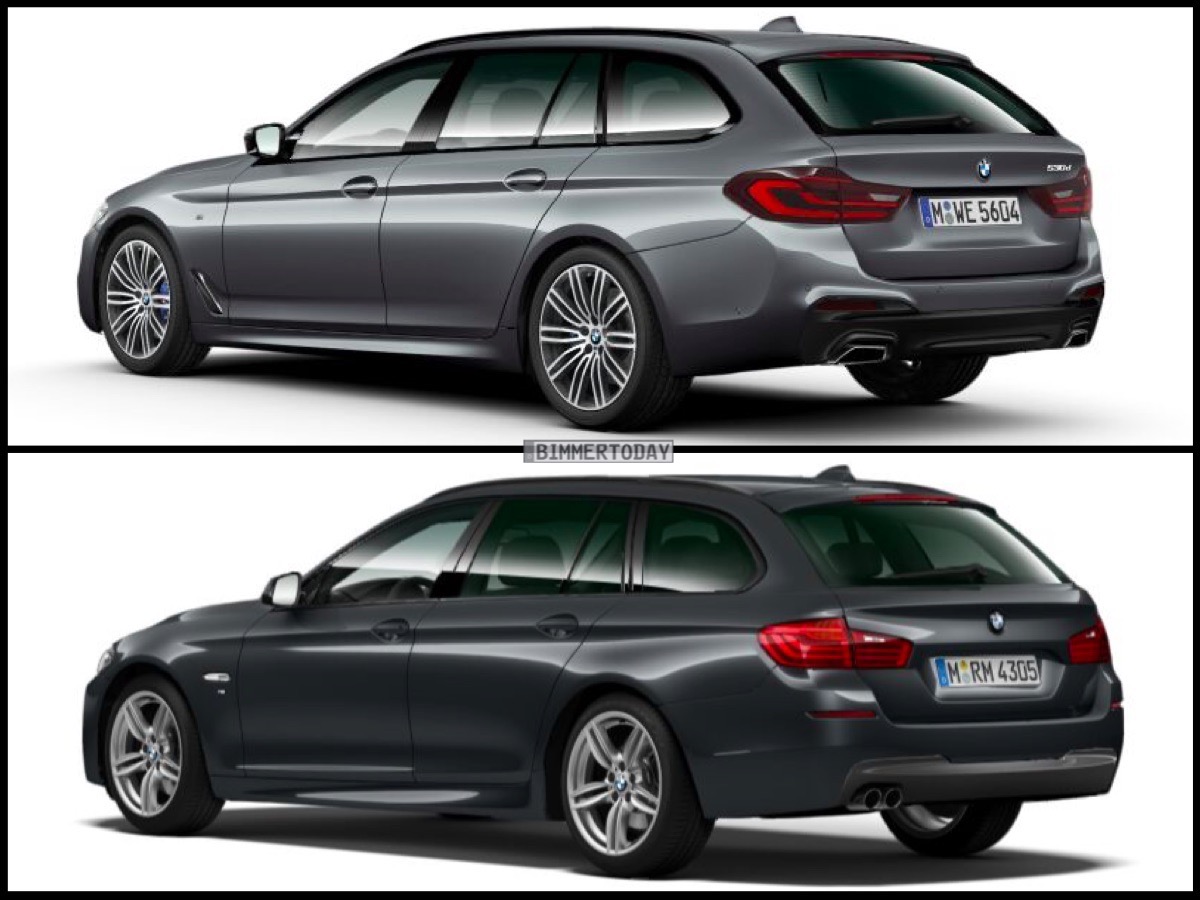 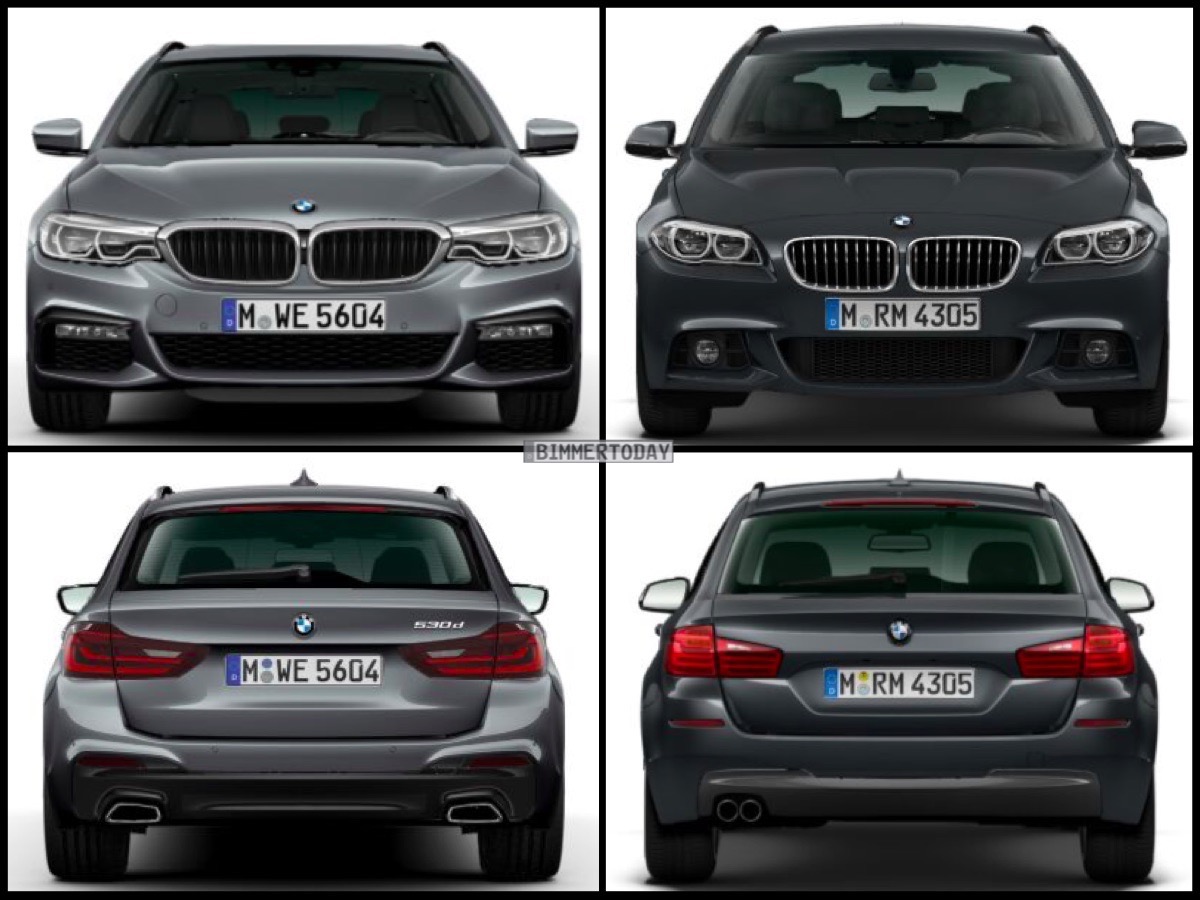