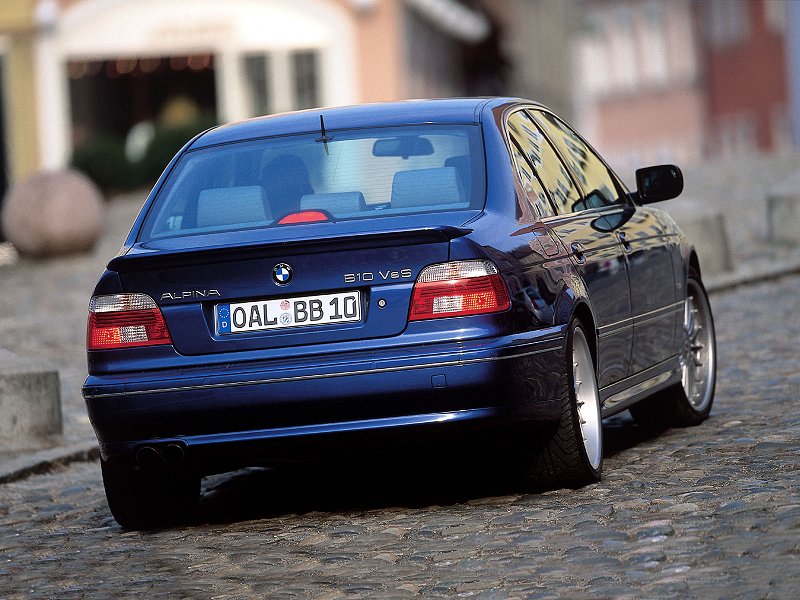 Until the surprising appearance of the BMW E39 M5 at the 1997 Frankfurt Auto Show, the top model of the 5 Series family was the BMW E39 ALPINA B10 V8. This year, the strong and unobtrusive sedan from Buchloe turns 20 years. Their series production began in January 1997 and was continued with a total of two model revisions until 2002, including an enlarged 4.8 liters displacement.

The BMW 540i was produced with Steptronic and ALPINA-specific preparations at the plant Dingolfing, and later the vehicles came to Buchloe to get there the transformation to the B10 V8. The vehicle was fundamentally modified and a new car was created in many respects. At the core is the drive: the BMW M62 engine received a stroke elevation increase to 4,619 ccm by adapting the bore (93 mm) and stroke (85 mm), under the code F3 at ALPINA. 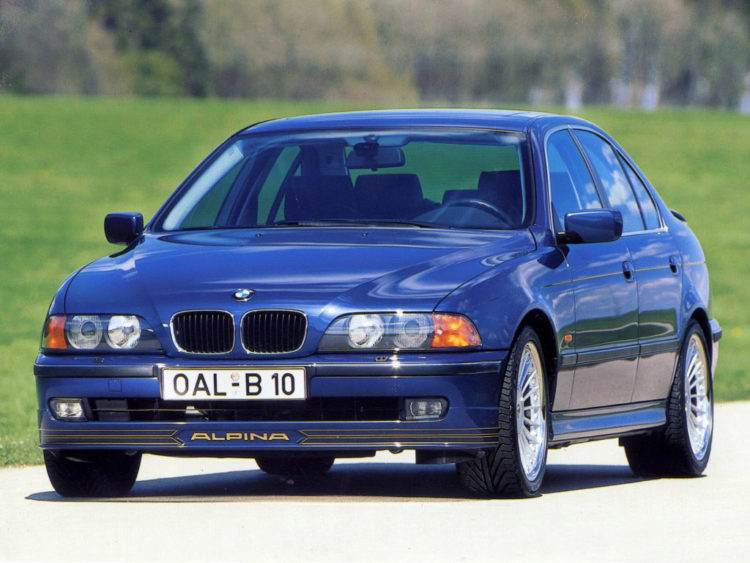 At the cylinder head, the valve seats are changed, ducts are machined and the inlet cross-section is increased by three percent as is the case with sports engine construction. The camshafts have an opening angle of 241 degrees at the inlet and 236 degrees at the outlet. At the crankshaft, weight-optimized sintered connecting rods and light aluminum pistons from Mahle are used. The compression is increased to 10.5: 1. The engine control unit comes from Bosch and is of the Motronic M5.2.1 type. The maximum engine speed can be increased by the hardware to 6,700 rpm. The effectively reduced emissions are dissipated via the two-burner exhaust system from Boysen with a total of six metal catalysts from Emitec.

The BMW ALPINA B10 V8 was below the EU II standard at the time and even maintained the D3 standard. This gave the vehicle registration tax benefits. The effort culminates in 340 hp at 5,700 rpm and 470 Nm at 3,800 rpm. The average piston speed is 16.2 m/s and the effective average pressure, which defines the efficiency of an internal combustion engine, is 12.8 bar – an excellent value even in the competition field. 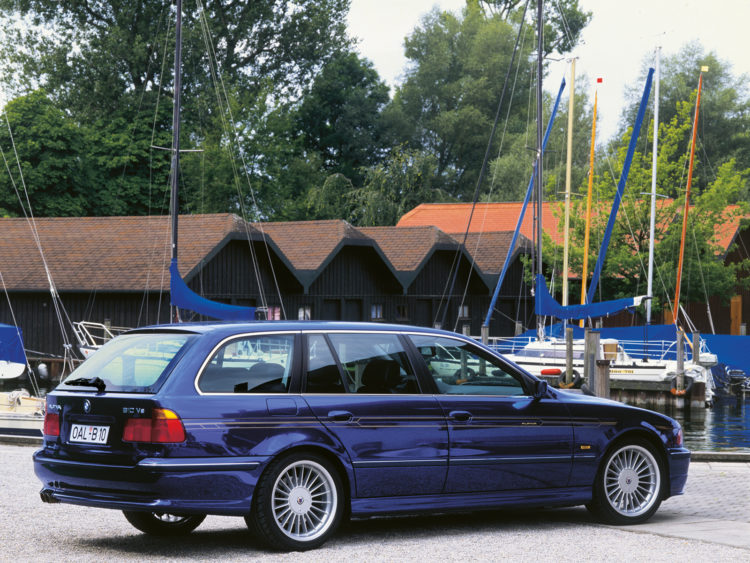 The ALPINA B10 V8 of type E39, unlike its predecessor B10 4.6 E34, was only available with an automatic transmission. The ZF five-speed automatic transmission 5HP24 features newly programmed shift programs and the SwitchTronic circuit. This means that the inserted drive stages can be changed via buttons on the rear of the steering wheel.

The braking system and the aluminum gear were also modified. The spring hardness was increased by 20 percent. The lowering of 20 millimeters was moderate. A specialty of ALPINA are the large light-alloy wheels with 20 inch spokes. On the front axle are 8 inch wide rims in 18 inch format, on the rear axle -9 inch width wheels. A special highlight of these wheels were the invisible valves for adjusting the tire pressure which are hidden behind the lockable wheel cover. 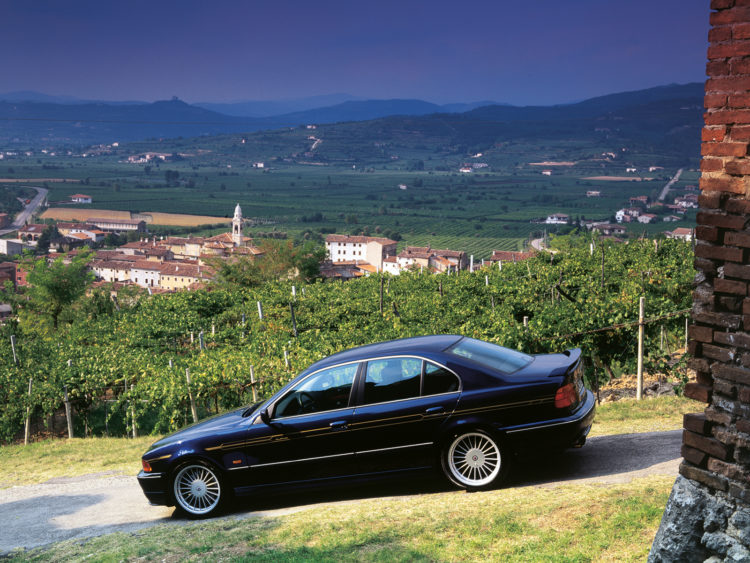 ALPINA traditionally uses Michelin tires on its models. In 1997, the Pilot SX MXX3 tires with the dimensions 235/40 R 18 and 265/35 R 18 was wrapping the wheels. Optionally, the future B10 V8 driver could also order a set of ALPINA rims for 1,500 Deutsch Marks, in which the wheel spiders and the rims themselves are connected with 20 titanium screws. These wheels came from BBS.

In addition to the large wheels, another distinctive feature of the 5 Series by ALPINA is the subtle front spoiler. Optionally, the B10 V8 sedan also has a rear wing mounted, which reduces the lift at 180 km/h by 72 percent.

The combination of a powerful V8 engine, shorter transmission ratio (3.15: 1) and a lower vehicle weight of 1,660 kilograms –  according to the DIN standard – allow impressive driving performance. The BMW ALPINA B10 V8 of the first series with a top speed of 277 km/h. The acceleration from the stand to 100 km/h pace is done in 5.9 seconds. 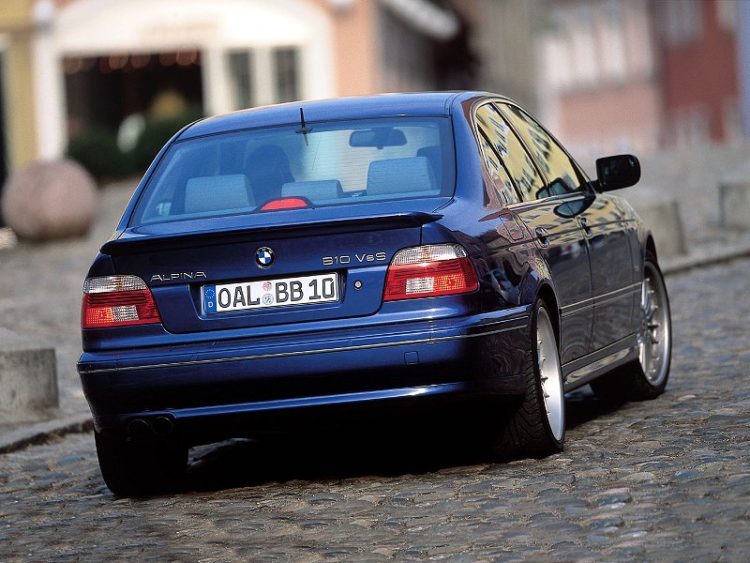 The standard equipment of the BMW ALPINA B10 was tidy, but not lush. For example, automatic climate control, sports seats with dark anthracite colored fabric cover and blue-green stripes, eight airbags, the Dynamic Stability Control DSC III and, of course, the silvered ALPINA type plate with serial number on board, were just some of the features available to customers. Bright xenon lights, special lacquering in ALPINA Blau Metallic or one of the possible leather equipment like Montana, Nappa, Buffalo, Lavalina or Alcantara were always an extra cost.

For the B10 V8 of the first series , ALPINA received 490 orders for the limousine and 82 for the touring. With the use of the engine base M62TU (variable camshaft control VANOS), the engine output of the F4 engine increased by 7 hp and the torque by 10 Nm. The differential also received an adjustment to 3.08: 1. The top speed improved slightly to 279 km/h. On the outside the revised 5 Series can be recognized by slightly altered exterior mirrors. By July 2000, a total of 364 limousines and 122 Touring were built.

In September 2000 there was a further update to the B10 V8 due to the adaptation of the exhaust gas standard to the EU III standard. The engine power of the F4 remained unchanged, but the acceleration performance improved to 5.5 seconds from 0 to 100 km/h. From the third variant until the beginning of 2002, 207 sedans and 44 touring were sold. 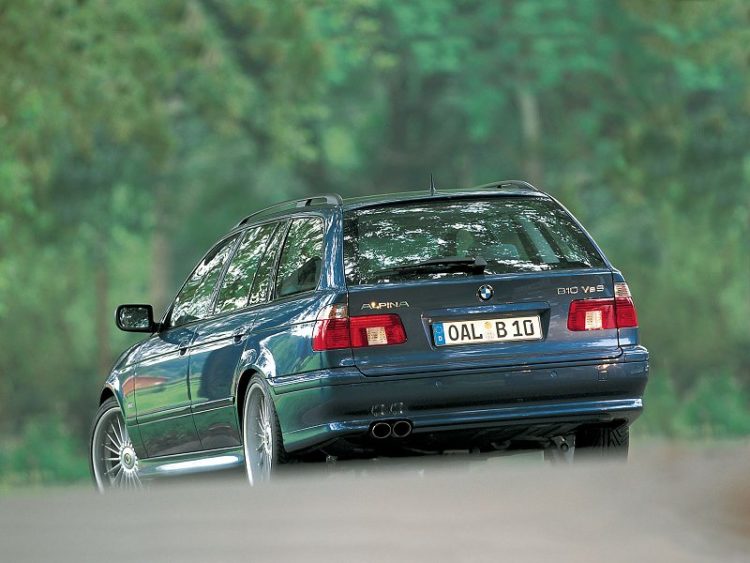