BMW i3 gets H&R Sport Springs and LED High Beams 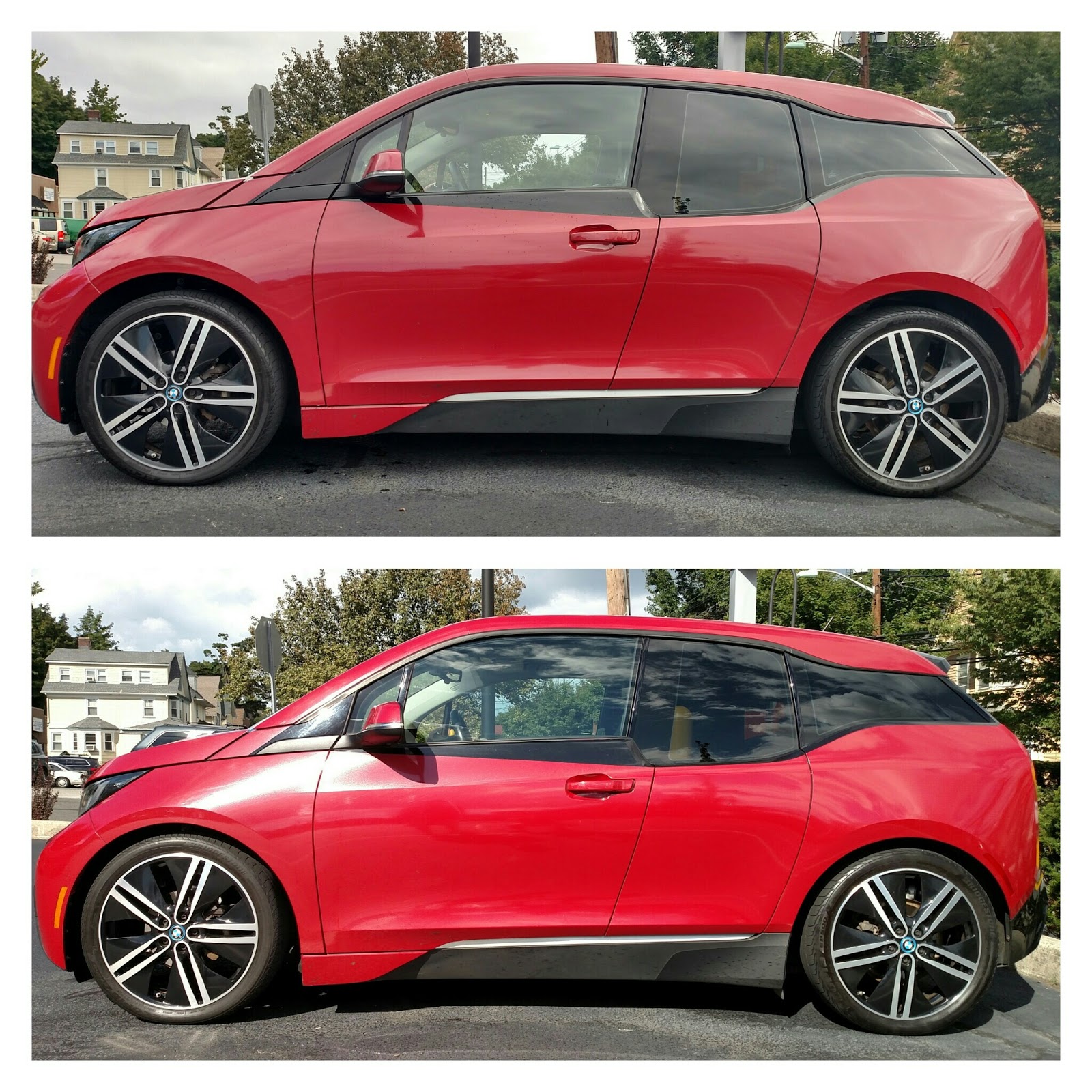 I’ve always loved modifying my cars. From subtle aesthetic improvements to serious performance upgrades, I’ve done it all. Modification isn’t usually thought of with regards to electric cars though, but that’s changing, and will continue to as more and more EVs come into the marketplace.

Many car enthusiasts share my desire to personalize their cars also. BMWs in particular have become synonymous with performance upgrades and that’s going to continue with BMWs that plug in, it’s just going to take a little time for aftermarket manufacturers to realize there’s a market for EV modifications. Granted it won’t be as easy as it’s been in the past; but where’s a demand, the market will create a supply.

One company that didn’t wait long was H&R, makers of performance suspension components. Within a year of the BMW i3 hitting the market, H&R had a sport spring offering available. H&R describes the Sport Spring set as follows:

“Direct from Germany, H&R Springs are the highest quality sport springs available. These H&R Sport springs for your i3 work well with the factory shocks and dampening to retain much of the factory drive ability and ride. This spring set will make a subtle yet noticeable visual improvement to the i3’s stance, reducing the perceived fender gap of the stock ride height. These springs transform the handling into more of what (we feel) this car should feel like — sharp cornering with only a small sacrifice in ride quality. The ride is still very compliant and well suited for city streets, keeping the ride quality very close to the stock ride comfort.

After about a month of driving with them I’m satisfied with the upgrade. Even though H&R says they only lower the front 1.2″ and the rear .8′, when I first sat in the car it felt like a 2″ or 3″ drop. The perspective from the drivers seat is noticeably different. However the real difference is in how the car reacts in hard cornering. With its new, lower center of gravity there’s less body roll and the car now zips around turns with much more authority than before. Yes, the ride is a little stiffer, but not so much so that it takes the enjoyment out of casual driving. I’ve been in cars that have had such a stiff suspension that they were impossible to enjoy unless you were racing, and these springs don’t go nearly that far. I may have to do some parking lot autocross now to really push it and see what it can do.

The springs have also made an improvement on highway driving. The i3 has a tall, boxy shape and it can get pushed around at times by windy conditions, especially when driving at high speeds. After the spring replacement, it feels more planted on the highway, and isn’t nearly as affected by winds. I suppose because of the lower stance that less air is getting under the vehicle and the lift is reduced. The H&R springs cost me $240.00 and the installation and alignment was an additional $450.00.

The second modification I recently made is a really simple and inexpensive one, but it’s made a big difference for me. I live in a rural part of New Jersey and on most of the local roads there aren’t even streetlights. There are also a lot of trees that block what little moon light there might be, so the streets are very dark at night. There’s also a lot of wildlife which will think nothing of running out in front of your vehicle at any time without notice. Like most residents here, I drive with the high beams on until there’s oncoming traffic but I was never satisfied with the illumination that the i3’s stock halogen high beam bulbs provided. The main headlights are LED, but the high beams are halogen, yellow in color and don’t illuminate as much area as I’d prefer.

So after reading the positive comments from some other i3 owners that upgraded to aftermarket LEDs for the high beams, I ordered the OPT7 FluxBeam LED Headlight Kit online for $79.99. They are simple to install, you simply remove the circular access panel in the wheel wells and replace the bulbs. For a more detailed, step by step installation instructions, click through to this post on the BMW i3 forum where member dvottero explains every detail of the process. Mind you, this should only take 15 minutes and the average person should be able to do it themselves. 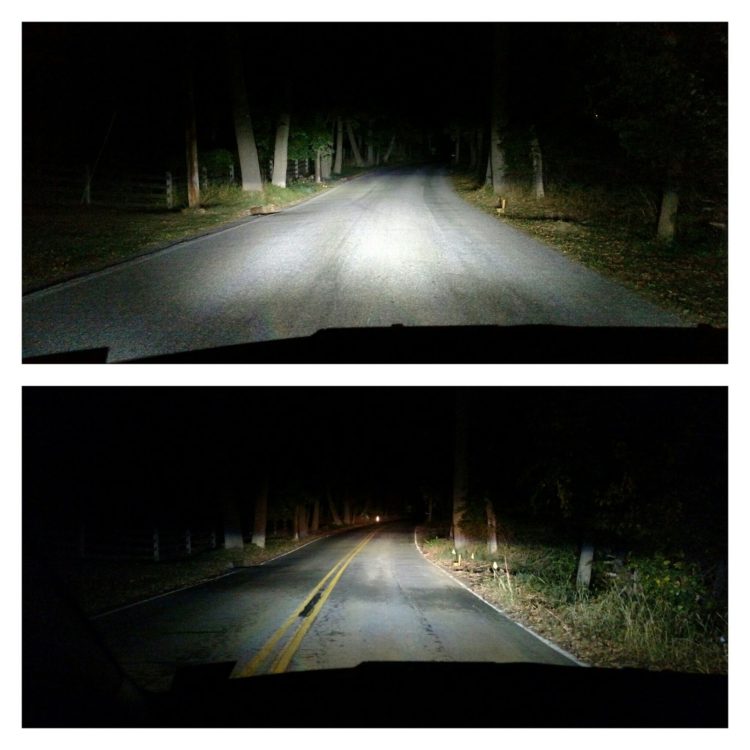 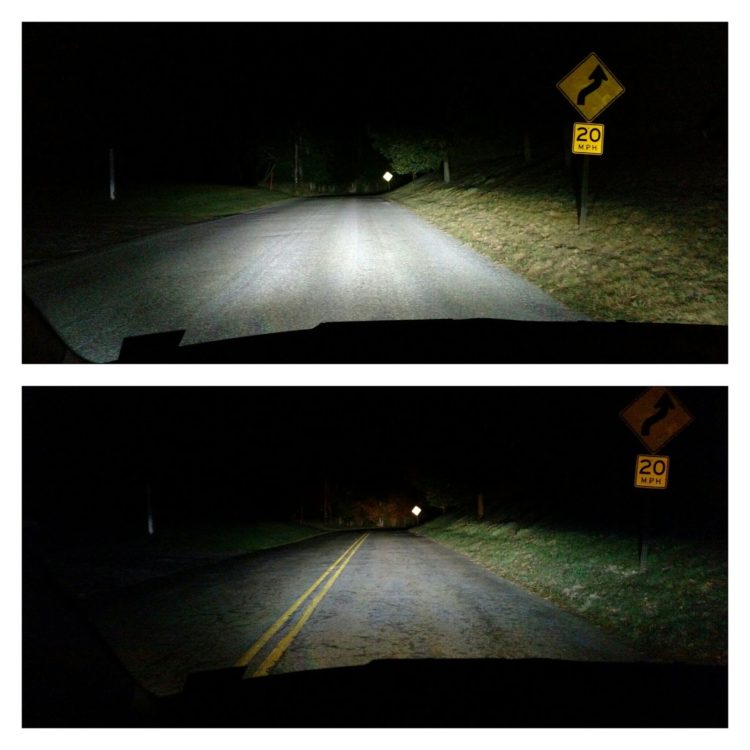 On the road, the new LED high beams (top pictures) clearly offer a better illumination pattern as well as a brighter light directly in front of the vehicle. I can now better see if there’s a deer approaching the side of the road from the trees and vegetation off to the side. It’s actually an even better improvement than the pictures seem to illustrate. Click on the images to enlarge.

These upgrades cost me less than $800.00 and have greatly improved the car in my opinion. They aren’t quite as drastic as the nitrous oxide kit I put on my 1986 Honda CRX Si, or the sway bar and performance exhaust on my 1995 Mazda RX7, but they absolutely improve the driving experience of my i3 and were well worth the money. I’ll probably keep this car for at least another 2 or 3 years so I suspect these upgrades are only the beginning.