Is online ordering the future of car buying?

Home » Is online ordering the future of car buying? After Tesla’s recent unveiling of its brand-new Model 3, a car priced and designed to compete with cars like the BMW 3 Series and Audi A4, we learned that it had over 150,000 reservations accounted for before it was even seen by the public. Admittedly, the reservation only cost $1,000, so if you’re serious about buying one, that’s not so hard to part with. But doing so sight unseen is still a risky move, although it seems to be one that hundreds of thousands of people were willing to make. It seems scary, to put money down on a car that you haven’t driven, sat in or even looked at in person, but it also seems like that could be the way of the future.

The generation of buyers who are likely to purchase cars this way in the future is the generation of millennials. Young buyers are so accustomed to doing so, as that’s what they do with electronics, smartphones and nearly everything else. Years of buying products without seeing them, on websites like Amazon, have trained young buyers to be able to make a decision without physically seeing or touching a product in real life. They’ve been trained to do their own research and do enough of it that they can make an accurate enough decision on what product to buy that they feel comfortable making big-ticket purchases on products they’ve never even sampled.

BMW is trying something like this itself, in the UK, with dealers being able to sell cars to customers online or even over the phone without said customer ever having to step into a showroom. All of the info about the cars is online and all the research one could need is within easy access of the websites. So a customer can use the online builder to create the car that they want, price out all the options and paint colors and make their purchase without ever leaving their home or office. While that may sound scary to some of you, as it does to me as well, it seems to be something that more and more customers are willing to do.

This method of purchasing works very well for smartphones and televisions, but seems like it could be a hard sell for many customers when it comes to cars. Cars are very unique and have extremely different characteristics that can’t be judged from doing research online. Two cars in the same segment with the same specs and same price can drive incredibly differently, so comparing them on paper is near impossible. Plus, there are so many different personal preferences to the way a car drives, it becomes difficult to expect to like something because it received good reviews online.

But these reasons aren’t stopping people from buying this way. BMW is having some mild success already in the UK with its new system and the Tesla Model 3’s success speaks for itself. Tesla must be overjoyed as they made over $100 million dollars on a car that doesn’t even actually exist yet on a production scale and made the money from customers who never saw the product or even had any concrete information about it. Talk about trusting a company.

Admittedly, I think it’s crazy to reserve a car without even knowing anything about it as I can’t even buy a TV without going to a store and looking at a million different ones up close for an hour to see which one is perfect and then going home to check prices online. So this method of buying freaks me out. But it’s a brave new world, I guess. 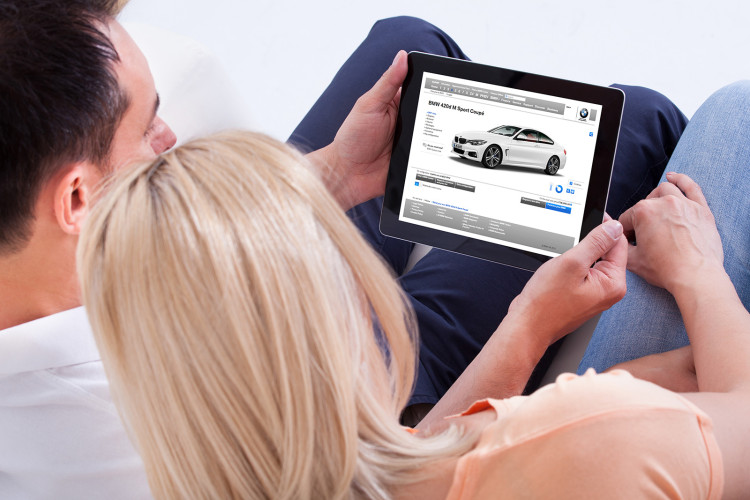 I can fully understand how it might help recurring customers more than new ones, though. Say someone leases an F30 BMW 3 Series when they first debuted and really like the car but there lease is up. The current brand-new 3 Series is still an F30 and basically the same car, so if they really like the car and want to re-lease a new one, why not just put in the order online or over the phone? They already like the car and want another one, so it won’t be a sight-unseen purchase. The customer would know exactly what they’d be getting and, if anything, they’d likely be getting some improvements as they’d be buying a slightly refreshed version of their previous car.

But it isn’t just new cars where this trend is starting to gain momentum. There a actually a few online used car-buying companies, such as Vroom, Beepi and Shift. These companies allow potential customers to search for used cars online and all of the cars are sold by these companies, not dealerships, so they’re guaranteed to be exactly as they’re represented online. The customer can then purchase the car right from their computer or mobile app and have the car delivered to them. While this might be a little sketchier than buying a used car, because you can’t guarantee the quality of the car left by the previous owner online, it’s still something that’s starting to gain momentum in the car buying world.

But the people that will like this method of buying more than anyone else are the automakers. Having customers purchase cars online will help cut down on dealership networks and marketing, which will save them a lot of money. This is a big part of the reason BMW is trying it out in the UK and it seems to be working relatively well. It also allows automakers to sell directly to the customer, which will save the customer money in all the ridiculous fees that dealers charge them. So such a program can help both the customer and the automaker but the customer takes a risk in not having actually tested the car before buying it. If you have that kind of trust and loyalty, then this sort of car buying is for you. If you’re the kind of hands-on buyer that needs to test every gizmo and gadget before buying, then maybe this isn’t for you. But one thing’s for certain and that’s that the car buying world is changing and millennials are leading the way.