How does BMW recycle cars

Home » How does BMW recycle cars

The BMW Group Recycling and Dismantling Centre (RDC) in Unterschleissheim first opened its doors in 1994. In the north side of Munich, research is conducted into the environmentally compatible and efficient recycling of BMW vehicles. Although officially the RDC is certificated as a recycling firm, it primarily recycles trial vehicles of the BMW Group.

Quickly and efficiently, and using cutting edge technology, almost 90% of the car is recycled and reused when its lifecycle ends.

Test mules or prototypes, pre-production vehicles, and even cars used in marketing campaign, are all neatly arranged in a graveyard waiting to be transformed into scrap metal. 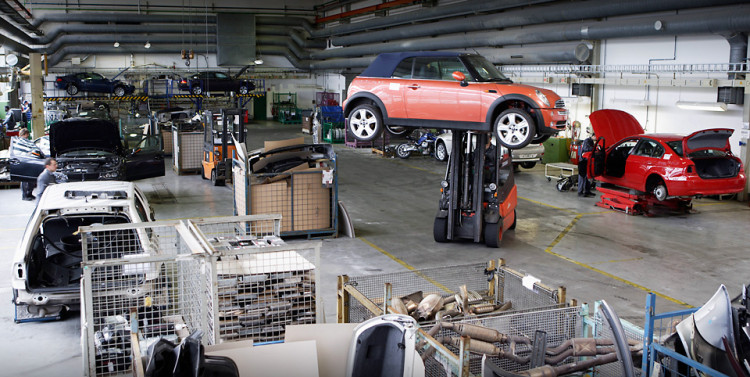 First, the car is drained of all the fluids (oil, petrol, brake fluid, etc). In a separate facility, airbags and belt tensioners are deactivated, and the battery and the pyrotechnic components are safely neutralized. Over time, BMW has been continuously researching ways to improve this process, such as the case of oil removal from shock absorbers. BMW Group recycling experts worked with partner companies to develop a device for the rapid and safe evacuation of waste oil.

The fluids and some car parts go to waste disposal, while the undamaged components can be sold as used spare parts (e.g. side panels, wheels, tires or radios). Precious metals like platinum are recycled. Engines can be reconditioned.

At the end, the body of the car is transformed into a cube by the gigantic crusher.

The cube is shredded into small pieces and then the sorting process begins, with the purpose of separating metals from plastics, by using magnets, eddy currents or screening. This needs to be done in order to be able to reuse the pieces as secondary raw material.

Car recycling is certainly not an easy process – as we’re talking about tens of thousands of parts in each car. This process has become so important for BMW that they are constantly exploring possibilities to dispose the materials in the best and most efficient way.

At the same time, BMW takes into account a “design for recycling” approach – for example, laying out vehicle components in such a way that fluids like oil, fuel or coolants can be removed quickly and easily at the end of the car’s lifecycle.

Here is a lengthy video highlighting the process: