BMW is going to be electrified. If you haven’t noticed the trend in the last few years, pay attention now. While the Bavarians won’t go all-in like Tesla, the assumptions are that almost every lineup will have an electric or a hybrid vehicle part of it. Meet the next generation G30 5 Series. The executive/mid-size luxury car has been manufactured by BMW since 1972 and it’s one of the most iconic automobiles ever built. It is BMW’s second best-selling model after the 3 Series and it’s available in three variants: sedan, touring and Gran Turismo.

The new G30 family is built upon the CLAR platform which will be found in the next 3, 5, 6 and 7 Series models. Design wise, the G30 5 Series builds atop the design of the current F10 5 Series by adding an aggressive and dynamic look to the elegant design. Some of the current BMW design features trickled their way into the G30 5 Series looks, starting with the headlights flowing into the kidney grille and the sporty character line flowing across the side of the car. The front fascia will incorporate lots of chrome elements for both a premium and sporty look. New full LED headlights will be made available, while laser lights will also be offered as an option.

Also, the G30 5 Series will be more efficient with new petrol and diesel four- and six-cylinder engines, plus a three-cylinder diesel for the most basic model – the 518d with 150 hp.

But this high level of efficiency is further increased with three plug-in hybrid versions. Depending on the model, an optional inductive load charging technology will be offered. One of these three, the least powerful, is the BMW 530E eDrive equipped with the same powertrain found in the new BMW 330e; a four-cylinder engine plus an electric motor to offer a power of 245 hp. In pure electric mode, you can travel up to 35 km with a maximum speed of 120 km/h. 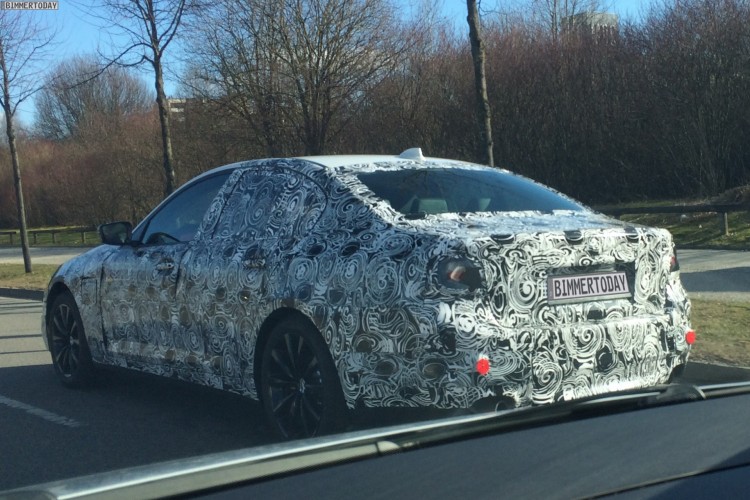 A 9-speed automatic transmission with a “Proactive Drive Assistant” will be able to shift ahead of time to overtake if the network of sensors and cameras detect a car ahead with a speed much lower than yours.

The spy photos included here reveal a hybrid test mule which is currently undergoing road testing in Germany. With the next generation 5 Series launching next year, we expect the hybrid variant to debut in 2017.