BMW’s famous M Division has always had special color options that fans go crazy for. Imola Red, Dakar Yellow and Techno Violet purple are just a few of the fan-favorite BMW M colors. With the latest F80 M3 and F82 M4, the big name colors are Austin Yellow Metallic, Yas Marina Blue, Sakhir Orange and Silverstone Metallic. While maybe not as famous as Imola Red, these are some really interesting colors that should be desired for a long time. But which looks best?

During an interview with some of the M3/M4’s designers around the time of the launch, the topic of color was brought up. The designers claimed that they felt Silverstone Metallic and Alpine White to be the best colors. Something about how clean these colors were and how they showed off all of the body lines and subtle nuances in the design. There is an old saying that if a car looks good in white that it’s a well designed car, as no body lines are hidden in white. But they also said how just the simple Black Sapphire Metallic was also one of their favorites, despite it hiding most body lines. Something to do with a stealth look.

The curious thing about that interview was that none of them picked a really exciting color as their favorite. I would think that they would want to push the idea of new colors, like Austin Yellow, as these bright colors fit in better with today’s culture and style. Walk down any busy street in America and you’ll probably see at least three people with some sort of neon-colored clothing on. Sure they talked about how Yas Marina Blue looked nice and Austin Yellow was exciting, but they all chose the simpler colors as their favorite. Maybe it’s a German thing. But they do have a point. The best colors are the ones that show off the design more. And it seems that Silverstone Metallic does that really well.

However, I feel as if I were to spend that kind of money on an M3 or M4, I’d want something a bit more interesting than silver. I like the interesting special M colors, they give the car a more unique feel. Everyone picks black. I want something a bit different. In my area, I actually see quite a lot of F82 M4s. Almost all of them are either black or white. I’ve seen one Silverstone Metallic and one Sakhir Orange. Theres only one BMW M3/M4 color I’ve yet to see in person and it’s the one I’d pick, I think. Yas Marina Blue.

I do really like Sakhir Orange, as I think it makes the BMW M3/M4 looks really menacing, but there’s something about Yas Marina that I like a lot. 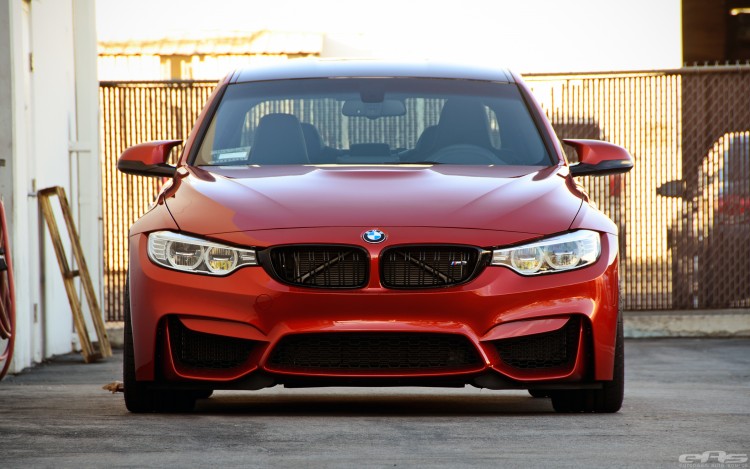 It’s such a light shade of blue that it still allows the sharp body lines to cast shadows on the car and it’s so bright that when the sun hits it, it just looks incredible. Plus, it reminds me of BMW’s blue and white logo, which I like. It’s also rare and catches people eye. Which I find is more important as the owner of a car, rather than passerby’s. When you have a car as exciting to drive as an M3 or M4, you want it to excite you just by looking at it. You want to look back at it and stare every time you get out. You want to love looking at it as much as you do driving it, because that’s part of the fun of owning such a car. So, for me at least, while Silverstone Metallic does look very good, as does Alpine White or Sapphire Black, I’ll go with Yas Marina Blue and stare at it all day.