BMW i3 REx To The Rescue

Home » BMW i3 REx To The Rescue 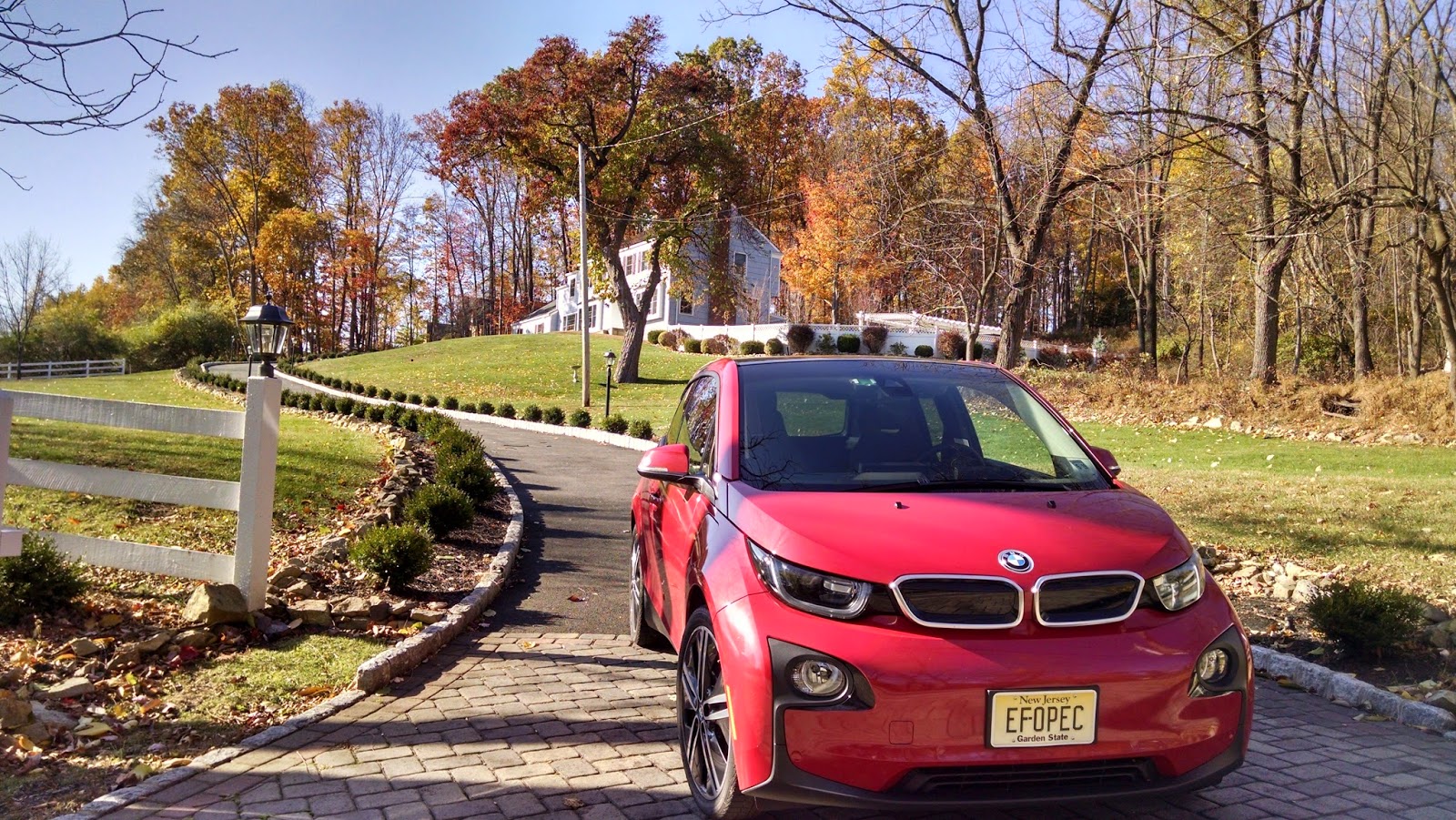 Those that have followed this blog since before I got my i3 know I toiled a bit over whether to get the range extender option or not. Having lived with pure battery electric vehicles for five years I really didn’t like the idea of hauling around an internal combustion engine if I really didn’t need to do so, even if it was a very small, efficient one.

Ultimately, the decision was easier than I had hoped. Once it became clear the i3 would have significantly less electric range than the two previous BMW-made electrics that I’ve been driving (MINI-E and ActiveE) I knew I needed the REx. As much as I love the i3, I’m still disappointed BMW moved backwards with the electric range in every EV they have produced. The MINI-E was good for a reliable 100 miles in moderate temperatures, the ActiveE about 90 miles and the BEV i3 is EPA rated at 81 miles per charge. I drive a lot and 81 miles would just be cutting it too close for me, especially in the winter when the range is negatively effected by the cold weather. 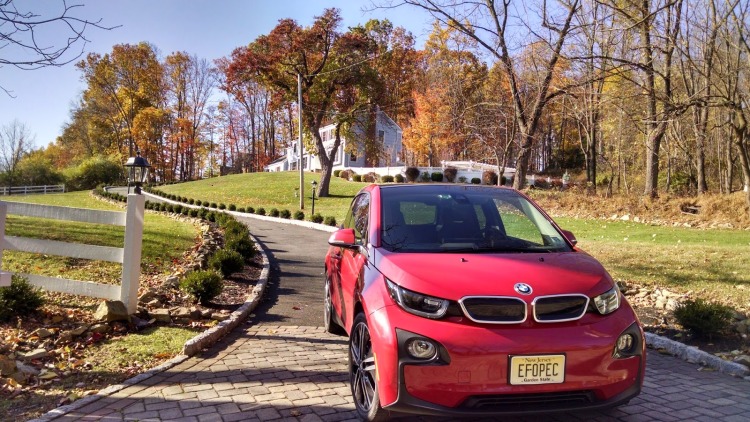 So i3 REx it was for me, and fortunately I’m very happy it worked out that way. Without the reassurance of a long range EV like Tesla’s offerings, there will indeed be some cases where the limited range of the sub-100 mile EVs require you to alter your plans or make compromises. I accept that because for me the advantages of driving electric far outweigh and small inconveniences that occasionally arise from the limited range or charging times. However the range extender option on the i3 was inciting because I knew I’d be driving on electric for 95% of the time, but still be able to take the car on days that I know I needed to drive further than the range could accommodate. That’s has indeed held true because I have a little over 11,000 miles and only about 500 of those miles were with the REx running. However so far the REx was just a convenience, allowing me to take my i3 on days I needed to drive far when I otherwise would have taken one if my gas cars. I hadn’t faced a situation where I really needed the extra range, and didn’t have any other options, until last weekend. 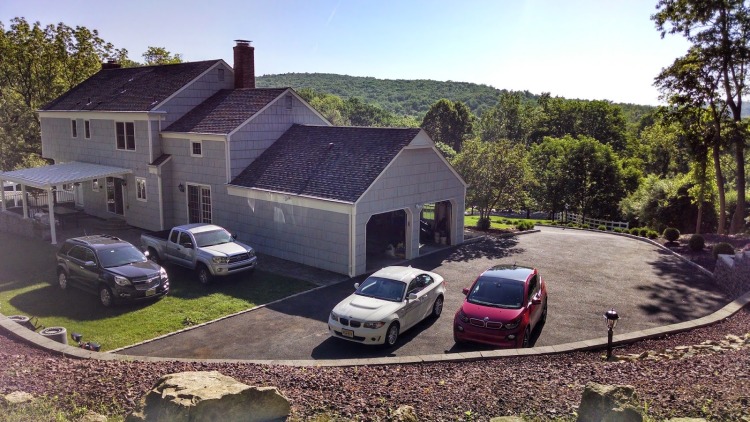 My wife and I have two gas vehicles besides the i3. Meredith drives a Chevy Equinox and I also have a Toyota Tacoma pick up which I use when I need to haul large items like refrigerators for my restaurant, and I also use it to plow my driveway and the parking lot of the shopping plaza I own and manage. These are our long range cars for trips like when we go to my in-laws Vermont. So when Meredith needed to go on a company retreat in Pennsylvania she naturally planned on taking her Equinox. About a half hour before she was ready to leave, I went out to the garage to give the Equinox a once-over. I always do this when she’s going far from home, just to be safe. 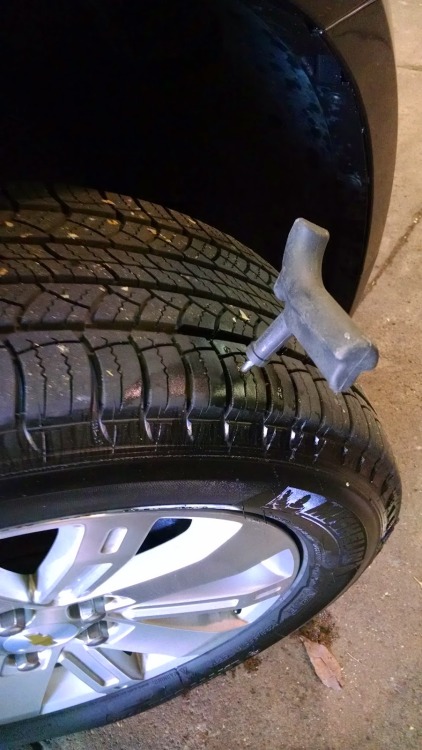 The first thing I did was a quick visual inspection of the tires and wouldn’t you know it, the first tire I looked at had a large screw sticking right into it and in a perfect position for me to see it. OK, there no time to fix this now so the Equinox is ruled out. No problem, I’ll load up her stuff into the Tacoma and she’ll use that. It can use a good run anyway since we barely ever drive it. I then remembered that I needed to refill the washer fluid because it was empty the last time I drove it. I popped the hood, filled the fluid and when I closed the hood I heard a loud cracking noise and the hood popped back up. As I lifted the hood I could see the latch than holds it closed was rusted and cracked in half. With no way to secure the hood closed that rules out the Tacoma. There’s only one option now, she’ll be REx-ing it to the retreat. 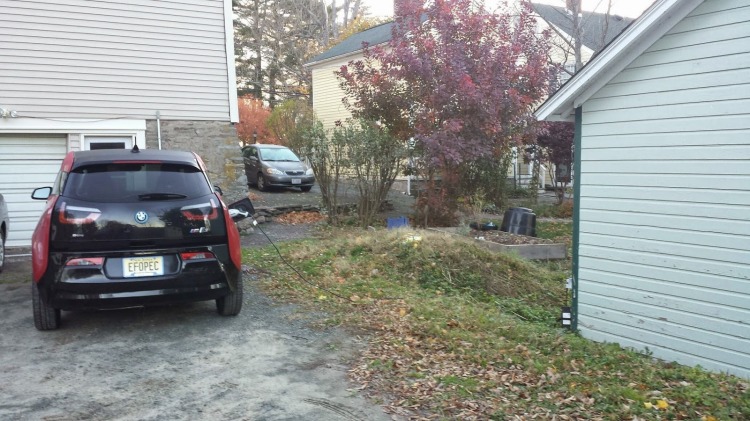 After a quick REx briefing (I don’t think she had ever driven it in REx mode before) she was off. Since the temperature was in the 40’s and it was all highway driving, I knew she’d only get about 60-65 miles before the range extender turned on so she’d be driving about 30 miles with it running. I had a full tank of gas so she wouldn’t need to stop for gas on the way there, however we didn’t know if she could plug in at all once she got there and she may have to drive the whole 95 miles home in charge sustaining mode. I’ve driven the car enough to know this wouldn’t be a problem as long as she kept her speed under 75mph, other than the fact that she’d have to stop for gas twice on the way home. I did a quick check to see if by chance there were any level 2 charging stations near where she was going , but as I expected, there were none. Luckily, the bed and breakfast she stayed at allowed her to plug into an outlet they had on the garage, so she was able to charge at 120v overnight. Since the retreat lasted for four days, she had no problem fully charging even with using the car to run some local errands every day. 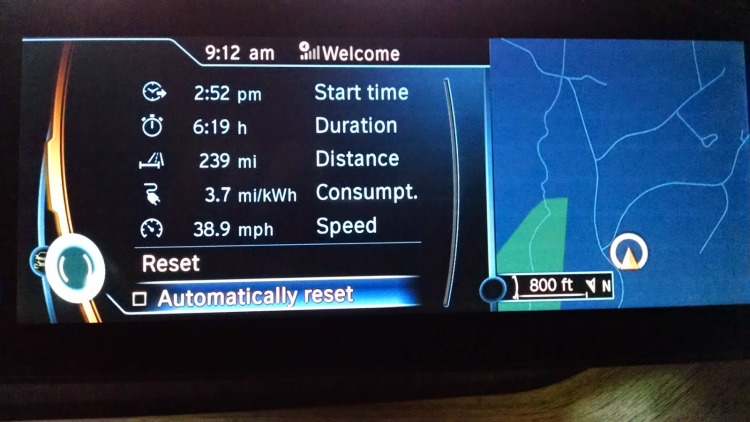 So even though I’ve used the REx a dozen or so times already, this was the first time it was absolutely necessary, and further validates my decision to shell out the additional $4,850 for it. It really makes the car so much more versatile, and allows me to not even think about the range. As others have noted, it really does allow you to drive more electric miles because you can use it for trips you otherwise couldn’t with the BEV i3. Obviously, the ultimate goal is for longer range electric vehicles to become more affordable, and infrastructure to mature to the point where public charging and DC fast charge is ubiquitous. However until then, the range extender will play an important role in the adoption of electric vehicles, as it allows for utility that is simply unavailable in the vast majority of today’s electric vehicles.