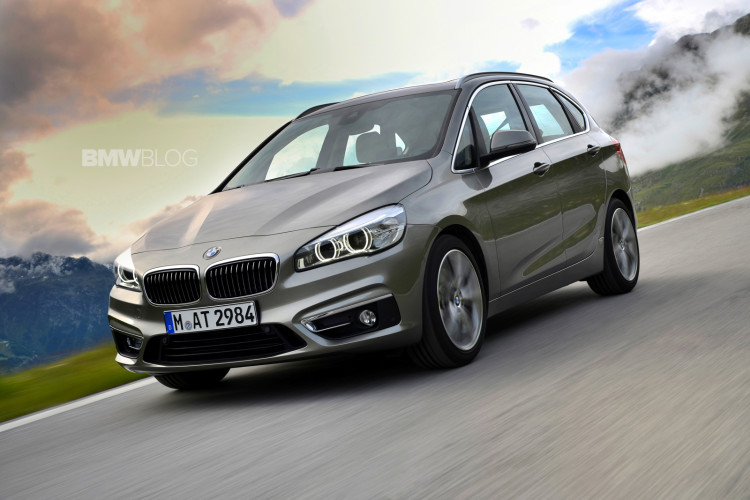 With the BMW 2 Series Active Tourer, the Munich-based automaker steps into three new territories. First, the Active Tourer is the first BMW driven by the front-wheels. Second, it’s the first BMW series vehicle to use a three-cylinder engine (aside from the somewhat limited BMW i8). And third, BMW launches a van-like vehicle which many years ago would have been seen as a blasphemy by its customers.

On paper, the 2 Series Active Tourer sounds pretty amazing. It has the right amount of tech, it employs an exciting exterior design and best of all, it has an attractive price point.

But the real question in the back of our mind was: how does it drive? Is the 2 Series Active Tourer a “real” BMW? 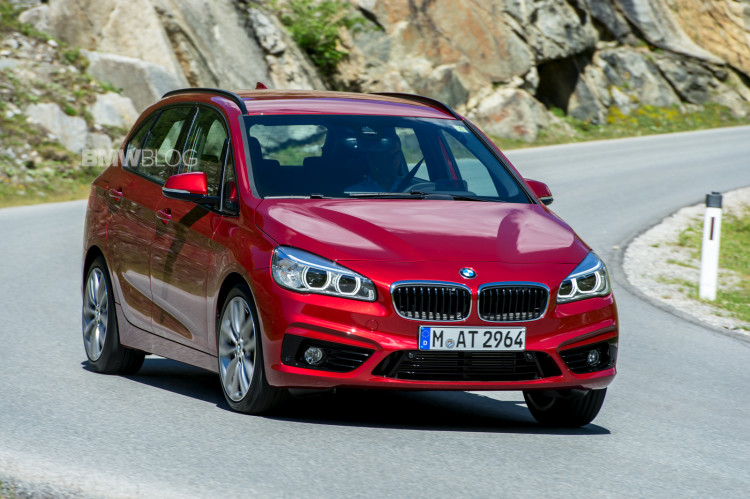 A Cabin Designed For Families

Without a doubt, when BMW designers sat down to envision and outline the lines of the 2 Series Active Tourer, one requirements was to make the car feel roomy and appealing to families. And the car delivers on this aspect with a relatively spacious cabin, stylish and premium looking. The clever packaging for the surfaces and panels was made possible by the front-wheel drive platform which means no driveshaft eating up room in the center of the car. 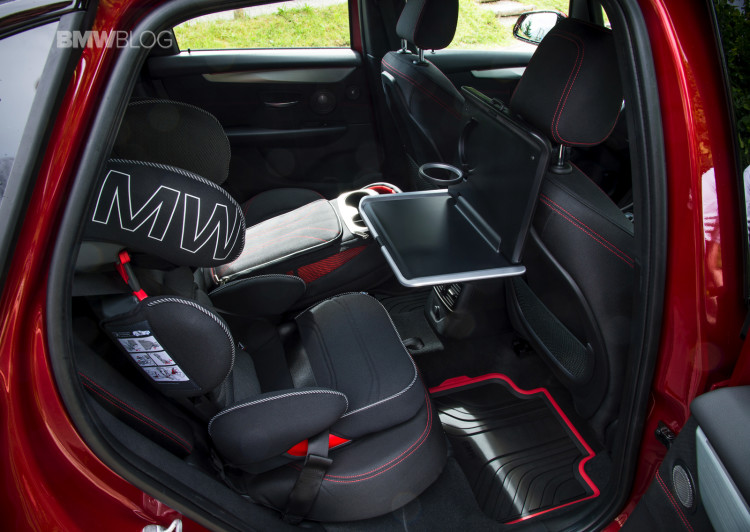 The uncluttered stack follows the BMW philosophy of driver-orientated panels, coupled with the typical BMW controls familiar from other models, but with slight variations, like the aluminum toggle that changes the drive settings. The 2 Series Active Tourer comes with premium materials with contrasting finishes and as expected, lots of storage space.

In the back, rear legroom is quite generous, although the tightly drawn roofline and high sides make the rear of cabin somewhat enclosed. But even tall adults will find room above their heads and plenty of knee space. The rear seats can also be tilted, and they slide forward and back in a 60/40 configuration, so you can trade rear legroom for boot space.

The rear seats also offers a split 40/20/40 and fold down when you push buttons located on either side of the boot. Furthermore, for those needing even more storage space, the trunk has a large compartment underneath its floor. 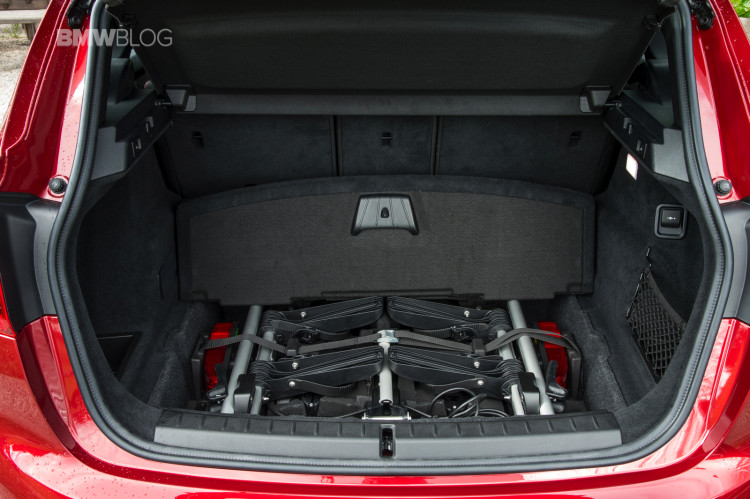 The seats can be ordered with a soft cloth cover or for a bit more money, the Luxury Trim delivers leather seats.

An 8.8-inch free-standing LCD screen dominates the dashboard and it’s controlled by the typical iDrive knob with touch technology. Some information is mirrored from the LCD screen onto the newly designed Head-Up Display. The 225i flagship model also comes with a beautiful panoramic glass roof. 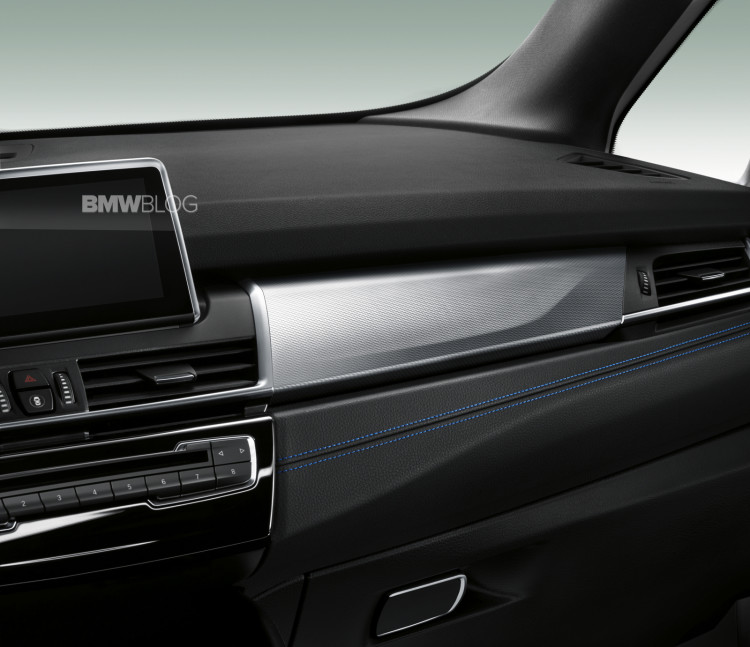 An M Sport package is offered as well and aims to bring a bit more sportiness inside the cabin. 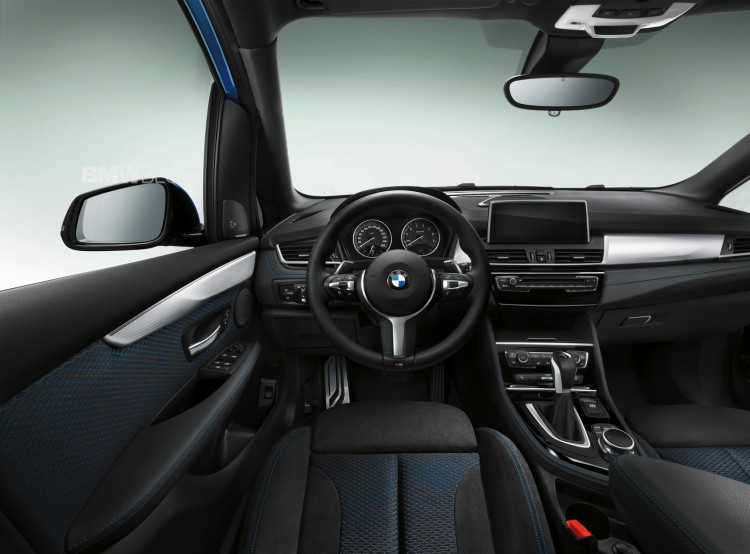 One thing that has bothered me when compared to rear-wheel drive BMWs was the A-pillar which takes some time to get used to it when cornering. I found myself constantly trying to peak through the little pillar as I cornered. But that’s probably a habit that you will develop in time.

For some reason, the BMW 2 Series Active Tourer looks better in real life than in photos. I won’t spend much time on the exterior design, but one thing that I find it encouraging is the fact that the 2 Series Active Tourer does not look like the typical minivans we see here in the US. The design is somewhat aggressive, dynamic and extremely functional. Michael De Bono, the exterior designer, shared some of his thoughts with us earlier this year. 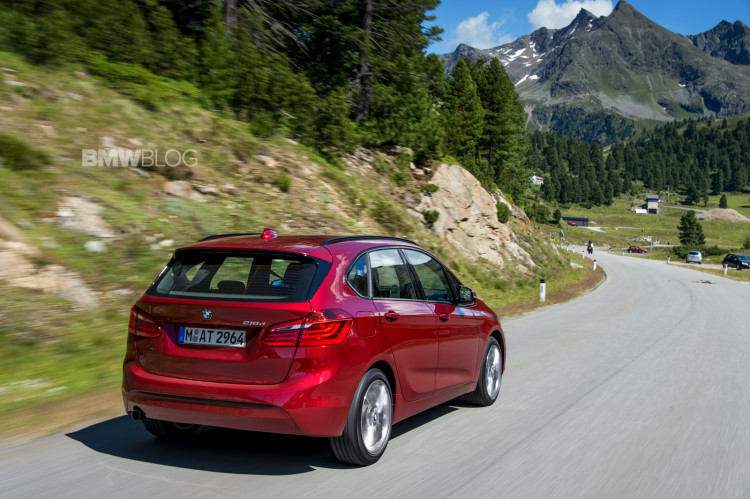 What’s the 2014 BMW 2 Series Active Tourer like to drive?

When BMW announced their plans to build a front-wheel drive vehicle, the BMW community, and not only, threw a fit. Worldwide-known as the “Ultimate Driving Machine”, BMW would now venture into a new territory for them in order to grow as a business and become competitive in more segments. With plenty of lessons learned from the MINI brand, BMW engineers and executives felt confident that their first front-wheel drive vehicle, the 2 Series Active Tourer, would not only look like a BMW but also drive like one.

Over the course of two days, we had the unique opportunity to test both a diesel and petrol-powered 2 Series Active Tourer. BMW chose these two variants to show us the versatility of their offering as well as the highly touted fuel efficiency. 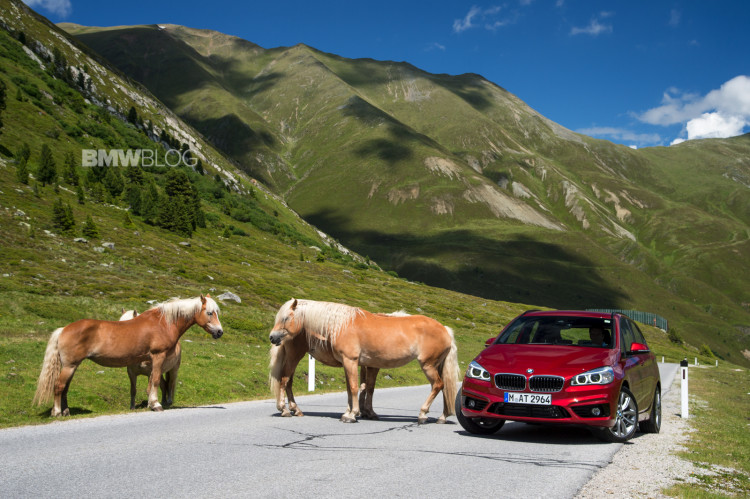 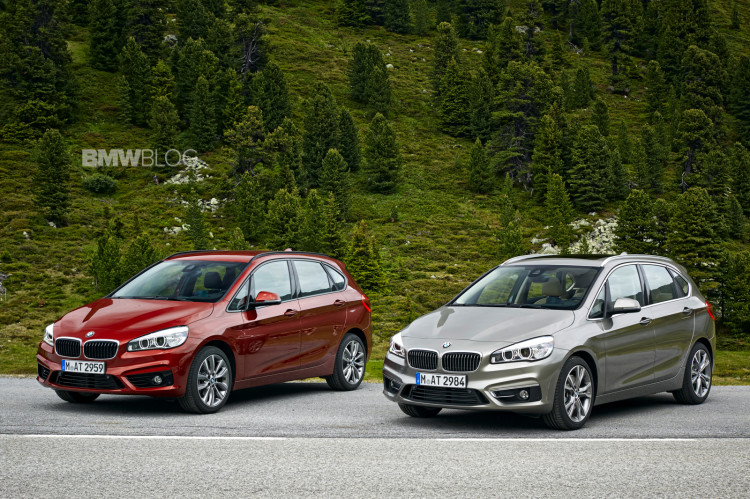 The 218d comes with a 2.0 liter four-cylinder turbo diesel producing 148 horsepower and 243lb ft at 1750-2750 rpm, a figure impressive by any standards. But as any small units, it comes with a power range where it feels most comfortable, and in this case, from 1800 rpm and above. Here is where the 218d feels nimble, fun and sporty enough even for someone that is not a normal driver. And by a normal driver, I mean someone used to an 1M as his daily driver.

But to be fair in this review, I put my fatherly hat on and assumed I was traveling with a family and at least one child. Truth is that with the 218d model, you can find yourself in the wrong gear when overtaking or climbing a steep hill and as any decent driver, you would have to simply downshift and bring the engine to the right power range. To be fair, BMW has never claimed that the 218d or even the 225i will beat any records on track, so these engines are here simply to do their job. 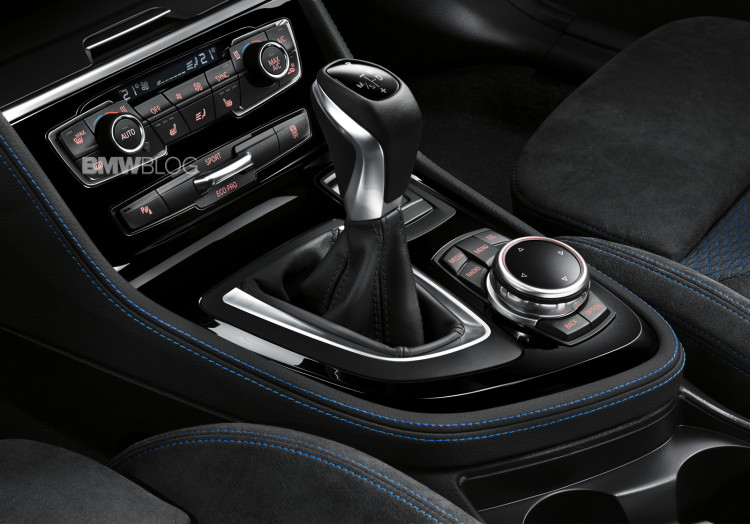 It is worth mentioning that the six-speed manual used in this car is still one of my favorites transmissions ever built by BMW: precise, fairly short gears and joyful to use.

The 225i Active Tourer is BMW’s current highest offering in the front-wheel drive lineup. It produces 228-hp/258-lb-ft from a 2.0 liter turbocharged petrol unit that is found in many BMW products. With significantly more power than the 218d, the 225i Active Tourer is even more fun to drive on the roads around Innsbruck, Austria. The ZF eight-speed automatic does a fantastic job in the combination with this engine. The balance between efficiency and sportiness has been perfected by BMW over the years and it is shown here at its most mature point.

When it comes to the sound under the bonnet, we still love the three-cylinder a bit more, or the “Baby-six” engine which has that growl sound we got to love in the six-cylinder powerplants. But we haven’t had a chance to test drive that one yet. 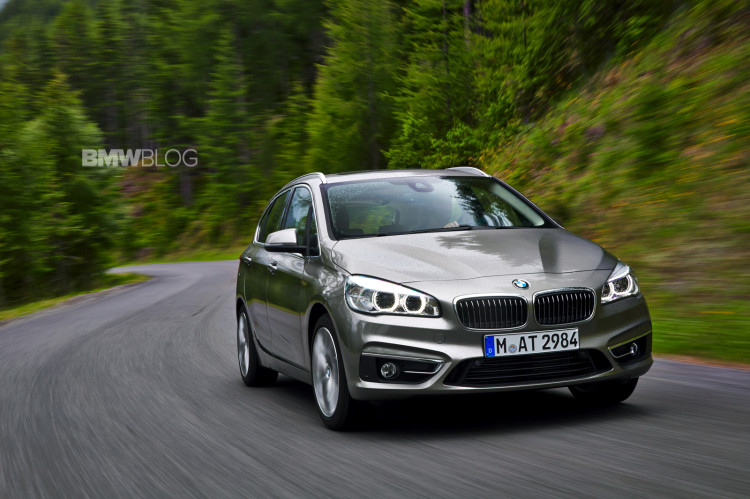 Driving the car at low and high speeds we noticed how well insulated the cabin really is. BMW designers have done a great job shutting out wind noise and road noise is only an issue on really coarse surfaces. I would call this a perfect and calming cruiser.

Now when it comes to handling, BMW engineers were quick to point out that the Active Tourer drives different than a MINI. They even went to length to explain the chassis work that went into the car and tons of other technical elements which were explained in an lengthy press release. And we do agree with them, but only up to a point.

As soon as we jumped in and had the chance to push the car quite a bit, we remembered the driving experience from a MINI Paceman or Countryman, but in a more compact package. The chassis is indeed a bit more balanced and responds quickly to throttle modulation mid-corner, but the high ride height and the stance on the road certainly brings back the MINI-like feel.

Interesting enough, the 2 Series Active Tourer seems to have less body roll than a 6 Series Gran Coupe we’ve tested recently, and it can also carry decent speed through corners while putting down some impressive grip, aided by the low-profile tires as well. It does feels a tad less sharp when turning into bends and when the Sport mode is welcome. 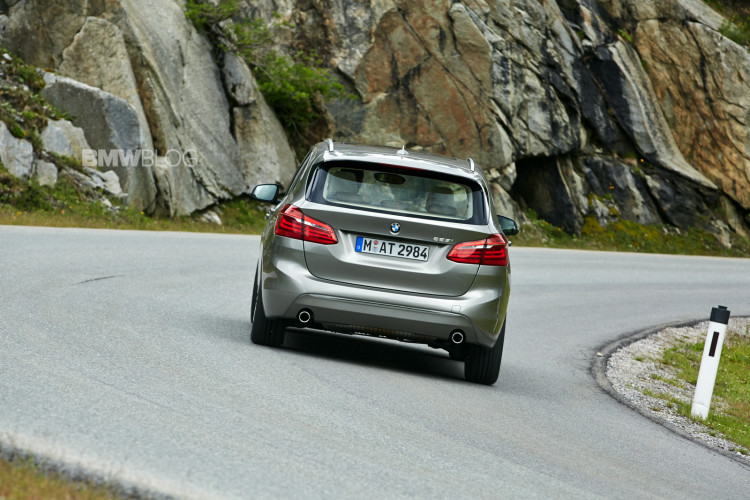 Speaking of the Sport mode, the highest setting of the adaptive drive adds weight at higher speed to the well-weighted electromechanical steering which is direct, linear and engaging. This shows that BMW has learned quite a bit in the last few years in the electro-mechanical steering department.

We did mention earlier some road noise at low speeds which was being transmitted up through the car’s front structure from the front wheels, but we tend to attribute that to the somewhat aggressive 18 inch tires.

When it comes to choosing between these two particular models, I’m inclined to believe that many will opt for the more powerful 225i with the 218d Active Tourer being ordered for fleet vehicles. 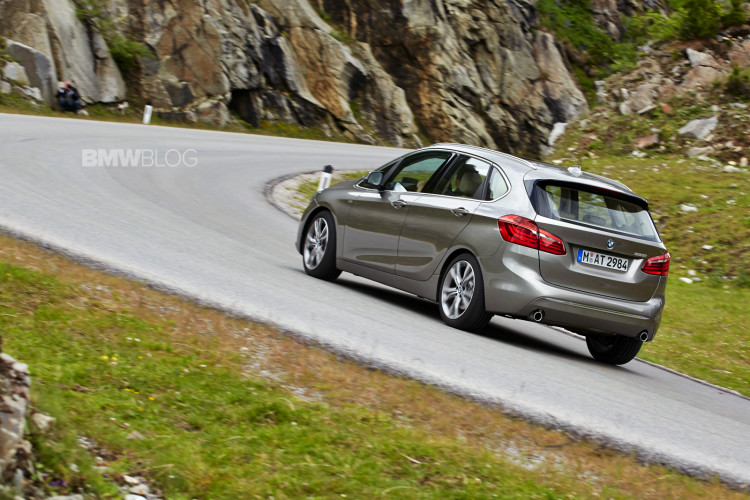 Is The Active Tourer A “Real BMW”?

BMW built their first front-wheel drive to be a premium product and in my opinion, they have done a far better job than many have expected. A few tweaks here and there, some different tires and wheels, and BMW could successfully compete with high-end mainstream rivals. For their first iteration, BMW engineers have achieved the maximum they could with this package, but in future generations, aided by use of more lightweight materials and potentially more refined engines, the 2 Series Active Tourer could become mainstream and cash-cow for the company.

We believe that even over the next few years, the 2 Series Active Tourer, with a five or seven-seat configuration, will find a place in the homes of many European customers.

The U.S. market is another challenge to overcome and it remains unknown at the moment when and if BMW will take on this task to sell the car to the more demanding and picky U.S. customers.

BMW built their first front-wheel drive to be a premium product and in my opinion, they have done a far better job than many have expected. A few tweaks here and there, some different tires and wheels, and BMW could successfully compete with high-end mainstream rivals. For their first iteration, BMW engineers have achieved the maximum they could with this package, but in future generations, aided by use of more lightweight materials and potentially more refined engines, the 2 Series Active Tourer could become mainstream and cash-cow for the company.
Rating: 4.1
BMWBLOG Test Drivesfeatured
Previous post BMW X5 xDrive40e Hybrid Spotted
Next post 2015 BMW X6M F86 continues testing on the Nürburgring