BMWBLOG Gets A Hot Lap Aboard The BMW M3 GT 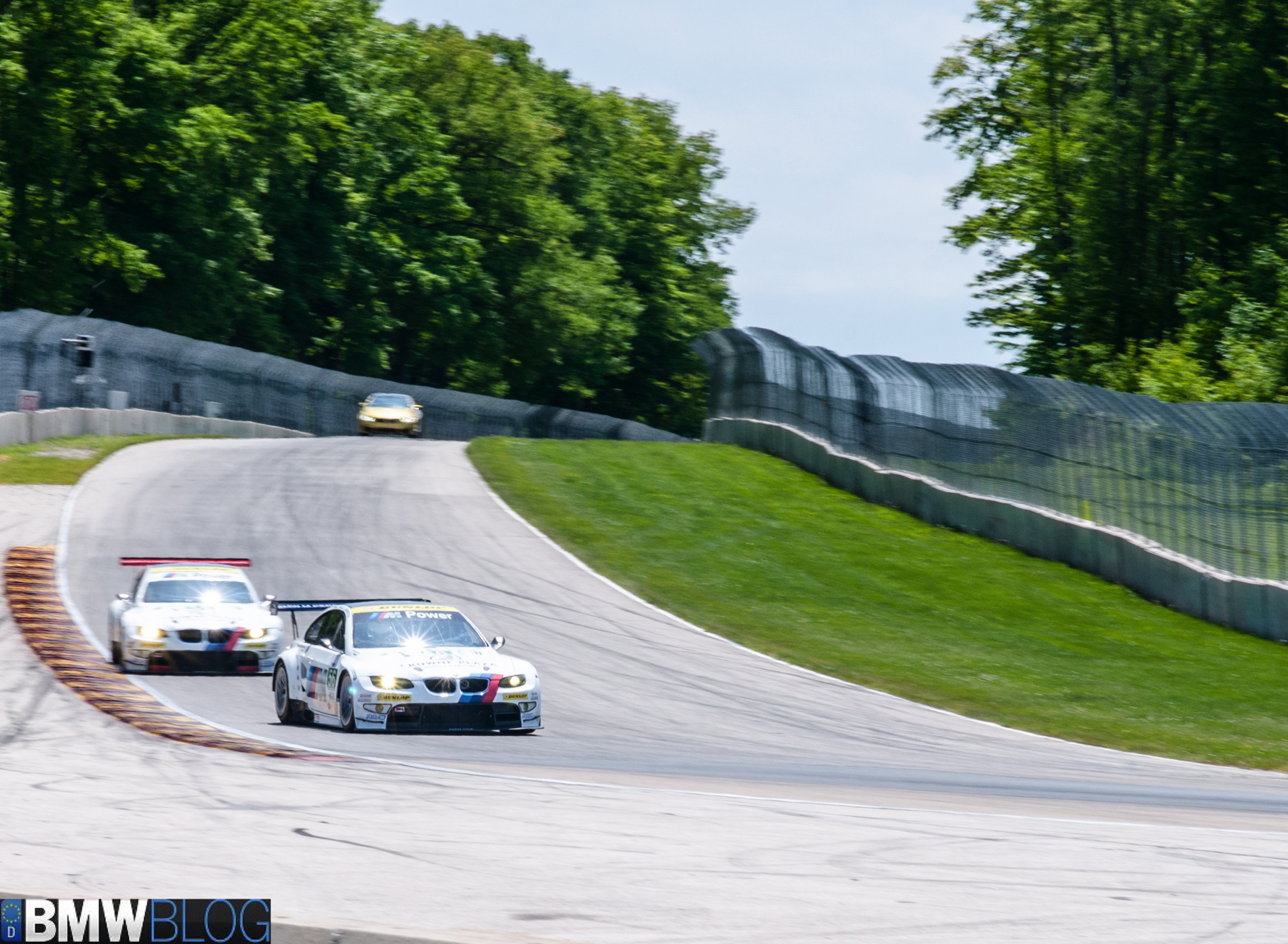 BMWBLOG joins Bill Auberlen for a hot lap aboard the BMW M3 GT race car at Road America. I directed my question leftward, turning as best I could despite being strapped down to the cocoon-like bucket seat: “Should I have ear plugs for this?” The response came back in a deadpan manner: “For two laps? You’ll be fine. Any more than that and you’ll want to blow your brains out.”I could only answer with “OK”. 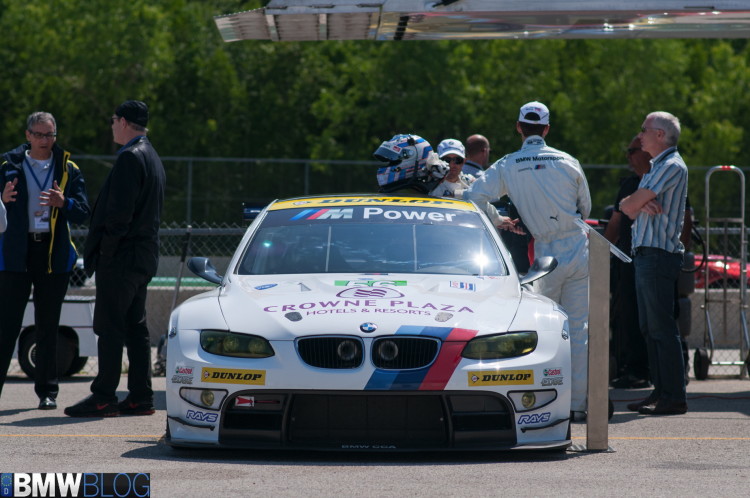 Surrounded by a cage of white tubing, I tried to get my bearings. Ahead of me was something that looked vaguely familiar as the upper dashboard of an E92 M3. Tracing the dash to the driver’s side, the tri-color stitched M wheel expected had been replaced by a blocky, F1-esque steering wheel with as many buttons as the combined total of every gaming system controller I owned as a child. Interestingly, a red button on the right side of the wheel was simply labeled “FANCY” though we would set off before I could get a full explanation from the driver.

Looking above me, in lieu of the anthracite headliner was a bare metal ceiling, covered by a peeling, light silver foil reminiscent something a conspiracy theorist might cover his house in. Looking down to the floor, there was a small steel plate thoughtfully added in for passengers to better brace themselves during a hotlap.

It was at about this time I noticed a distinct smell of fuel permeating the cockpit. That didn’t matter as we were given the thumbs up to exit the pitlane and I was committed. Somewhere ahead of me a massive V8 came to life with a short wheeze replaced by a roar and then womping noise as the engine idled. The driver pushed us off down the pitlane and we began our two laps of Road America in the former American Le Mans Series spec E92 M3 GT race car.

How different could it be? We were in a road-going M3-based race car, after all. Surely, I would have a good idea of what it would be like after a morning of pushing an M4 around the historic circuit, right? 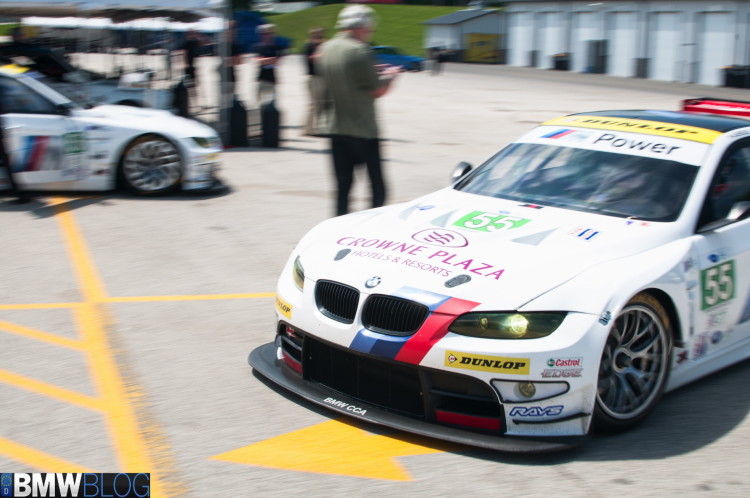 Turn 1 was a blur but, as best I could tell, we braked something like 50 or 60 yards beyond where I would have initially applied the carbon ceramic brakes of the F82 M4. Ripping off brutal upshifts, we were off into Turns 2 and 3 with the 4,5, and 6 complex being nothing more than an exercise in the g’s generated given a combination of Dunlop racing slicks and incredible mechanical grip of a superb racing chassis. The thoughtful kickplate on which I had pinned my feet now felt as though I was standing atop a volcano seconds away from erupting as the motor was reached full bore.

By the time we hit the Carousel I was pinned to the left side of my racing seat with my hands tucked into shoulder belts just to better support myself. It took some effort to try and lock my eyes on the exit of the corner. I was looking out for the infamous Kink.

For those unaware, the Kink is a turn for the brave if it is to be taken flat out. In a roadgoing M4 I was taking the Kink at somewhere around 100MPH before running the coupe out to the left side of the track and continuing onward to the sharp right-hander that is Turn 12. What’s important to know about the Kink, though, is that’s its an essentially blind right turn that propels drivers into a tight Watkins Glen-esque corridor of powder blue concrete walls, with the barrier to the outside of the corner sporting a scary amalgamation of car paint and scraped up tire rubber. They say that taking the Kink flat out is a sign of significant testicular fortitude.

We took the Kink flat out.

As we pushed through the bend, I found myself laughing out loud until I realized I couldn’t hear myself laughing over the roar of the motor. My head, sans earplugs, felt like the ball in a pinball machine rocketing back and forth between my ears. I couldn’t be sure if it was the teeth-rattling vibrations of a hyper stiff chassis that caused the sensation or the peaky, mechanical scream emanating from the long, vented nose. Beyond the overwhelming pitch of the motor, the earlier fuel smell had been replaced by the acrid smell of worked out six piston AP Racing front brakes and the warmed up Dunlops.

By the time we hit Turn 14 heading uphill and on down the front straight towards Turn 1, I cut my eyes over to the pit lane entrance, wondering if my stomach had enough strength to hold up for another 2 minutes or so. I’m not sure what where we topped out on the straightaway but stealing a quick glance at the instrument panel we were at an indicated 241kph and climbing. The driver seemed to brake as late as he could, almost as if I was daring him to see how far he could dive into the corner before slowing the car was an absolutely necessity.

Thankfully, my face only somewhat felt like it was going to give up before the M3 GT would loosen its grip in the braking zone. As soon as we slowed, in a single, efficient flick of the wrists, the angry Bavarian changed direction in the blink of an eye as we were off again into the infield of Road America – again a blur of local greenery and red and yellow rumble strips lining the circuit. 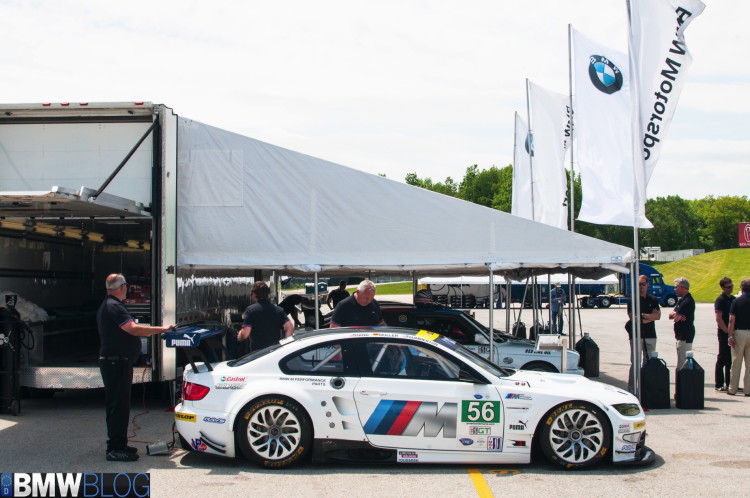 Juttering to a stop on the pit lane after two full laps, I did my best to take stock of the experience that, by a long shot, beat any rollercoaster ride I had or ever will have in terms of a pure rush of adrenaline. I twisted the belt clasp and freed myself of the bonds of the racing seat harnesses to reveal my shirt was soaked through with sweat – no doubt a combination of adrenaline and the nauseatingly hot cabin.

Almost deaf, I reached out a sweaty hand to shake white, sponsorship covered gloves of the driver and shouted “Thanks for the ride!” no doubt far louder than necessary, receiving an appreciative head nod in return. With that, I tumbled free of the roll cage and tried for the second time in 5 minutes to get my bearings and perhaps begin to air out my damp shirt. This was a hell of a day for me to spend at the office but for my driver? This was just another day at the office for the legendary Bill Auberlen. 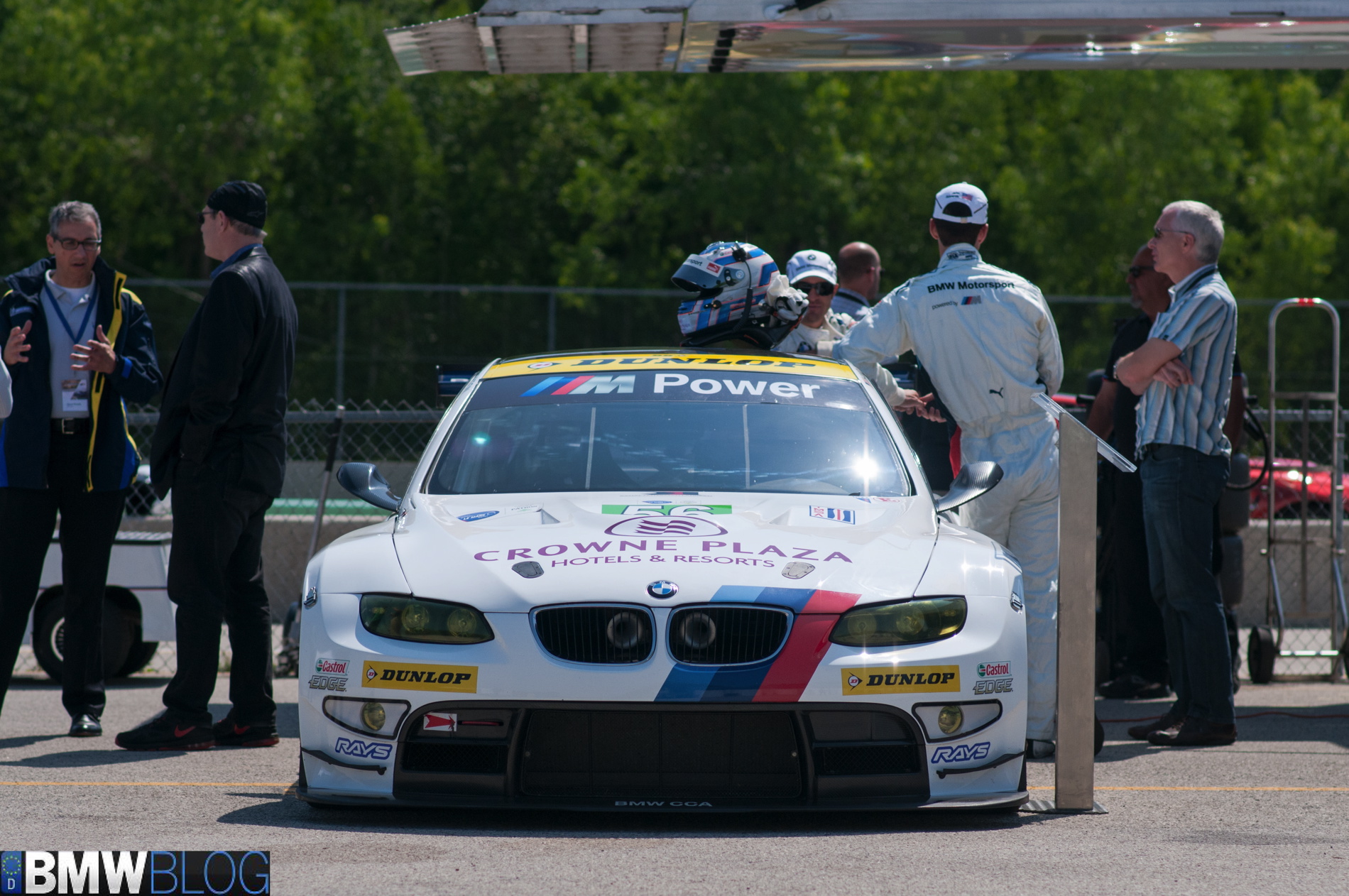 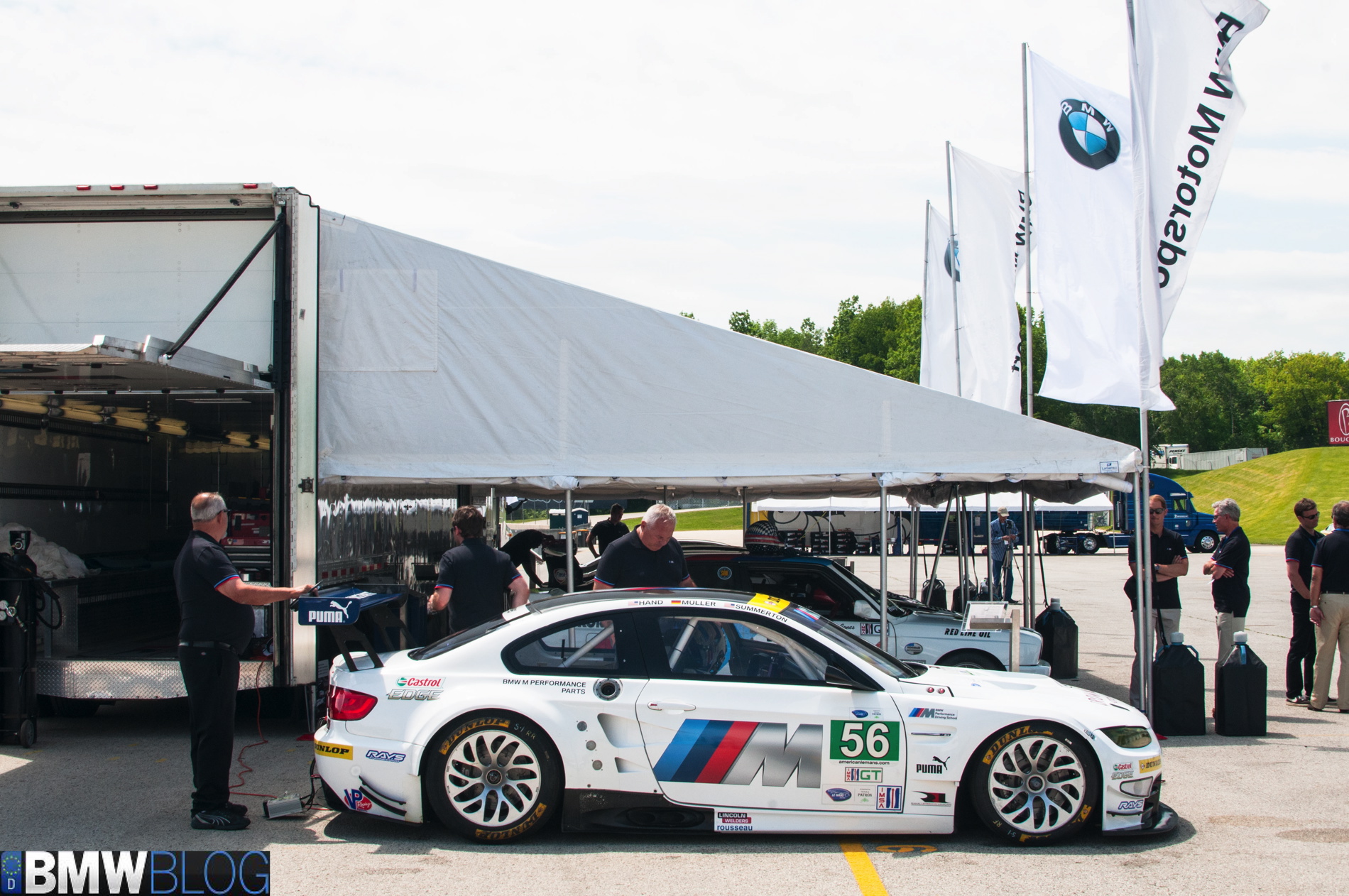 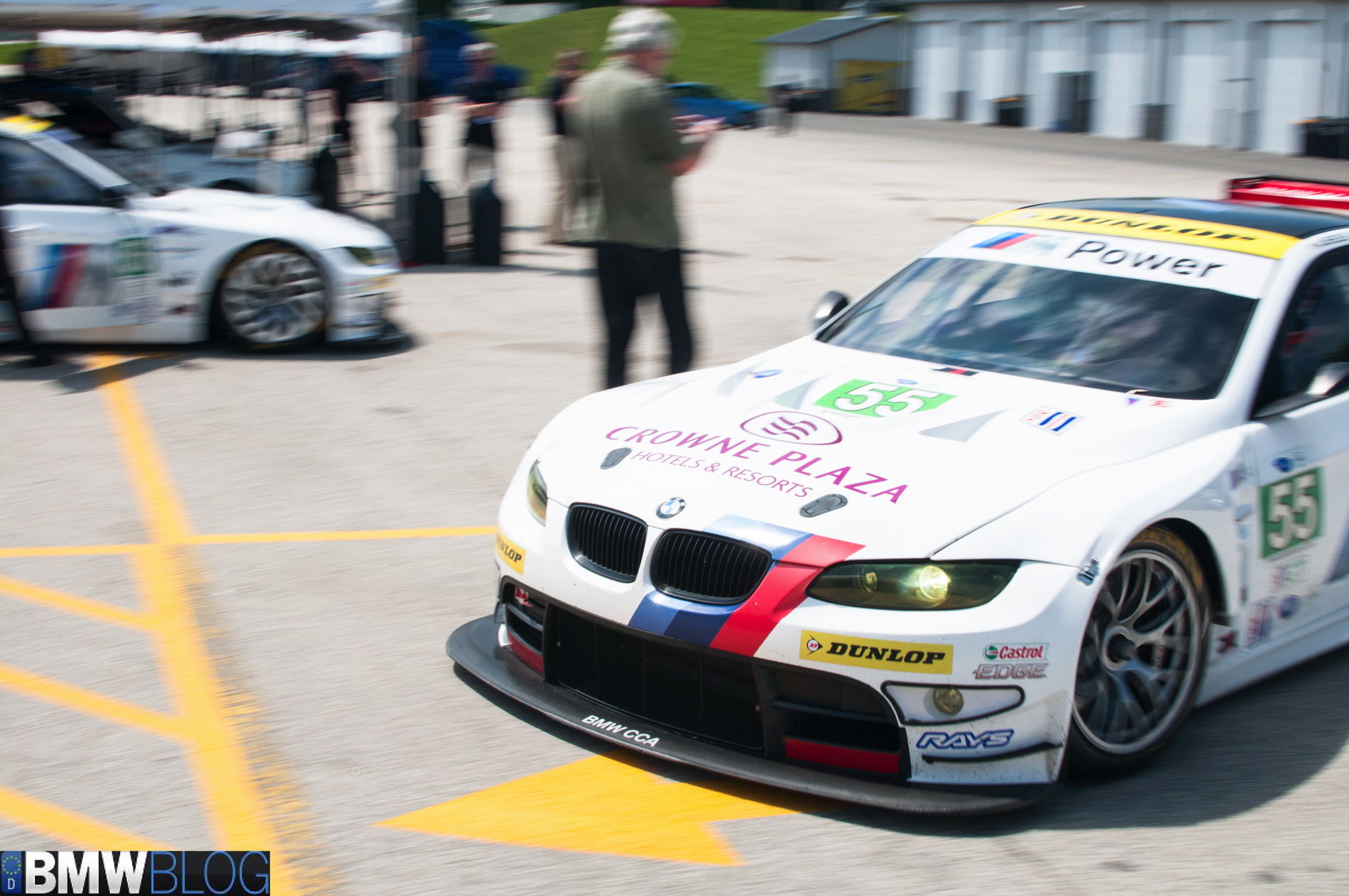 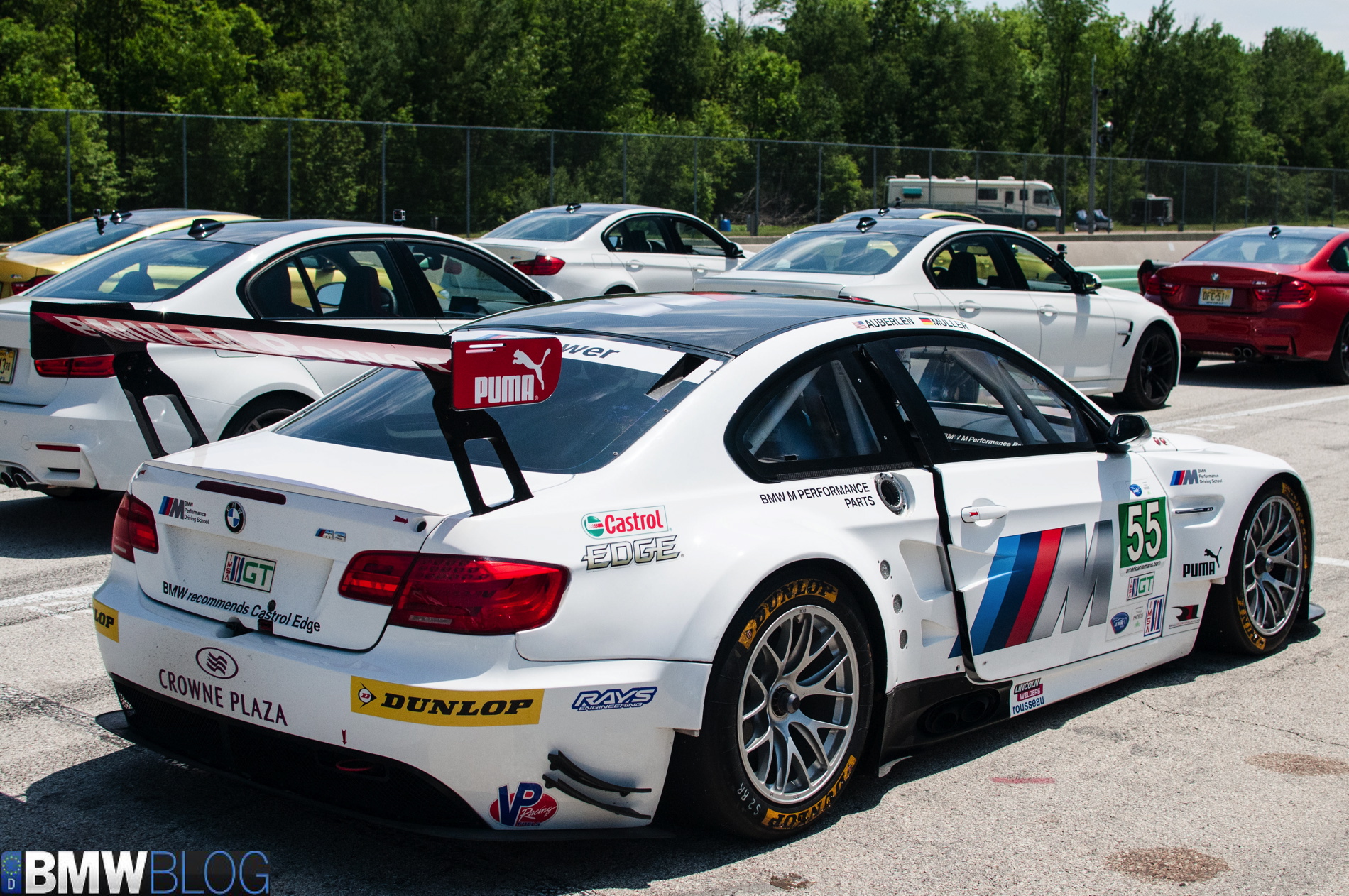