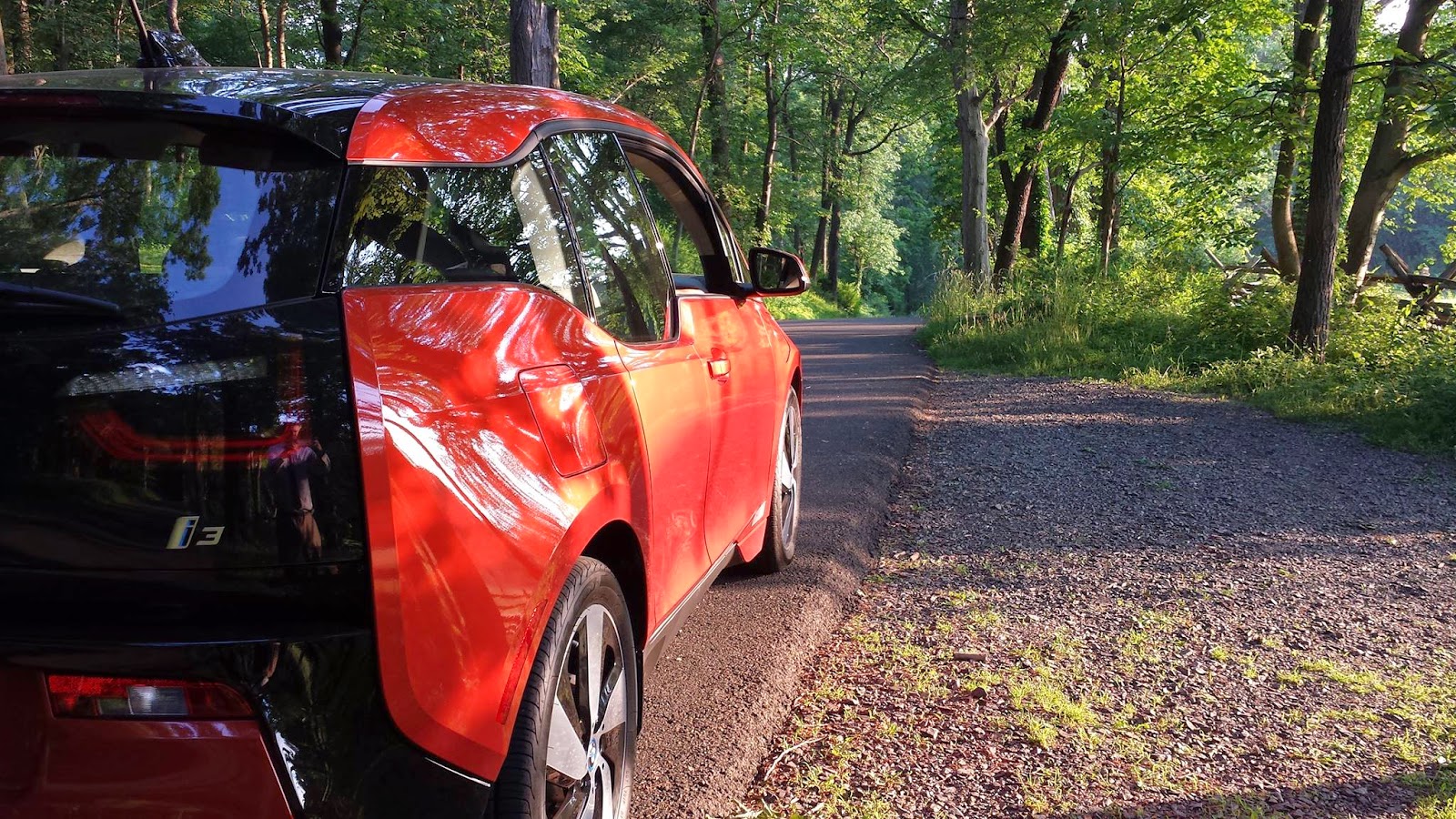 I say second impressions because it is not my first stint in the i3, my first was on a race track for 10 hrs straight in a couple of pre-production units and I was thoroughly impressed. Now that I have my own, I’m even more impressed with this EV as a daily driver.

Tom Moloughney has already posted his likes/dislikes with his new BMW i3 REx so now it is my turn…plus I’ve been asked to.

Big Like: There is no getting around that the BMW i3 looks different, it does, but the beauty is in the details, and those details are everywhere. You just have to look. Pictures do the i3 no justice. It is not sleek but it does not need to be…it is functionally attractive. The right proportions.

With that said the i3 is a magnet. My ActiveE never drew this much attention. I’m followed on the highway, thumbs up from passing drivers. People walk right up to the car to check it out and talk with me. They want to hear about it, they want to see inside. They think it is beautiful. Interesting that so many heard of the i3 and they really like the looks.

At one point coming back from work and in my parking garage I noticed there was a huge line of cars just stopped….you guessed it….a couple cars in front were looking at the i3. It is that polarizing and I love that. I’m also in love with the color, Solar Orange, it changes in the sun, just beautiful.

Mini not like: all the attention, I can’t catch a break.

Only from the side I like: those tires are just odd, no getting around that, they are retro, might be even thinner than tires from the 1890s. They ride fine, handle well but I’m worried about those potholes, can they hold up? I have the 19s and glad I do. Oh, and wow they make noise, odd noises especially under hard acceleration. Just so different and I’m not sure I will ever get used to them

Big Like: the i3 rides amazingly well, not harsh. My ActiveE was tiring, not the i3. It is smooth on the highway and around town. I’m really glad I went with the standard 19s, roads in NJ are anti-car and I’ve driven an i3 with 20s and you really can feel everything, the 19s look just as good and smooth it out. On the highway you don’t realize how fast you are going, it just rolls along, very impressive.

Dislike: the car is squirmy on the highway, it is not the sensitive steering…though that enhances it…those skinny tires are rails so whatever it catches along the road it sticks to. The i3 is also very susceptible to side winds…even cars pulling up along side on the highway push the i3 around with their wind. Not sure if those are the tires or the higher profile of the car but you really feel it. The ActiveE was very well planted, of course it was much heavier and less tall

Like: This car is really nimble on its feet. It scoots right up hills and wow is it fast. Same horsepower as the ActiveE but 1,000 pounds less equals woooohooooo!!.

Dislike: Because it is much lighter it can’t hold the momentum like the ActiveE did. Meaning rolling down a hill is not as effective as the ActiveE was. It actually slows down, the ActiveE would pick up speed while regenning which was cool.

Big Like: I like them, cool looking too. Makes getting my daughter in and out really easy.

Dislike: not as intuitive as a regular 4 door, can be confusing as to what door opens first and closes last.

Big Like: people this little EV moves. No it is not a rocket off the line like a Tesla Model S but once past 10 or 15 it launches. If you are at 40 and punch it it hauls. The ActiveE lost breath around 50 but the i3 keeps going, you can feel it build speed and it is so refined in the way it does it. It really catches people by surprise.

Dislike: it needs to launch more aggressively off the line.

Like: it handles, initially it does not inspire confidence but give it time and you will see the i3 holds the road. Those skinny tires are deceptive. The turning radius is amazing, the steering is a bit heavy and sensitive but after awhile it feels more natural and gives the impression of more heft than the car really has.

Dislike: it leans but only if you push it.

Sorta like: too weak and seems to have a mind of its own. A bit unpredictable, the ActiveE was good regen stuff, bring it back.

Huge Like: The i3 was designed around us and this is what sold me, that interior is gorgeous. People love it. Tons of room for a small and not so wide car. The seats are comfortable and lots of room up front and enough in back especially for my Daughter with her child seat. It even has cargo space. I chose the Giga, it is a mix of different light colored materials and I love it.

Dislike: need more, 4 are not enough, since there are no vents in the rear center console there should be a 3rd in the front center….it gets warm in the back not to mention the front, that windshield is a convection oven.

Like: it is really efficient, I’m getting around 90miles per chage with a much smaller pack than the ActiveE had. 90 is pretty good considering I have extra weight with the REx and I’m driving highway speeds often, I was much more careful in the ActiveE but with the i3 I can have a little more fun it seems

Dislike: not nearly as efficient on the highway as the ActiveE was, that’s because it is a bit of a box. How about a bigger battery BMW? Don’t get me wrong, I’m glad I have the REx but 150 miles on batt would be great. I may still have gotten the REx for the emotional back up but I will always want more batt range.

Thumbs up like: I really am liking this EV. It is comfortable all around, fun to drive and wow does it attract attention – all attributes I really like. It is extremely refined and that is saying a lot since EVs are refined right off the rack when compared to ICE. This i3 compared to the ActiveE is a Rolls, I don’t think I’m getting ahead of myself here. After 600 miles I’m good

Ok so now what?…we have the perfect EV? Not so much….Still needs a few improvements….bigger battery and not to be so susceptible to side winds and yes, those tires. Too skinny, I know they are for efficiency but we buy cars on looks, good thing the i3 is an exceptional EV because those tires would ruin the show.

Windshield reflection….wow guys how could you miss this. The dash material is very cool but it reflects off of the inside of the windshield in a bad way. Not sure anything can be done about this. I never noticed it while on the track because it was a cloudy day and never got to chance to test drive the i3 in the real world because we were never give the chance….sure there were those special Electroncaut meetings but it was on a weekday and I could not get out of work and the ride and drive events were not convenient either for me.

The launch experience.…I have to say something about this. BMW, really? You are lucky your i3 is such an accomplished EV because if I based this on Electronaut to i3 satisfaction, excluding car experience, I would not have an i3….simple. This is an easy fix…you still have the opportunity to make it right BMW. Communication is all that is needed. We all know these cars are extremely advanced and things will happen, as long as there is communication from you we are good.

Preconditioning seems to be a bit of a mystery…I tried pre-conditioning while plugged into my Chargepoint at home. The EVSE was turning on and off while the i3 went through its phase. The ActiveE never did that. I finally just unplugged it. It might be that the i3 takes what it needs then disengages from the EVSE then re-engages when it needs more. The clatter it makes is not comforting.

No tinted windows…that would be nice especially since your competitors do it on all cars…you guys just don’t. I am getting used to not having a sunroof because I don’t look up, but guys, where is the SOC (State of Charge) and battery temp reading? That’s like yanking the tach and oil pressure gauge out of an M3 or no percentage indicator on your phone….come on now.

Engine warning light….won’t even go there

Lots of Ghost In The Shell going on…..some of this should not have been missed, we drove an ActiveE for 2 years or more, plus, a MiniE. The same issues that these cars had you said you fixed are happening…not good.

There you have it, most of it anyway.