BMW i3 and the Samsung Galaxy Gear

Home » BMW i3 and the Samsung Galaxy Gear 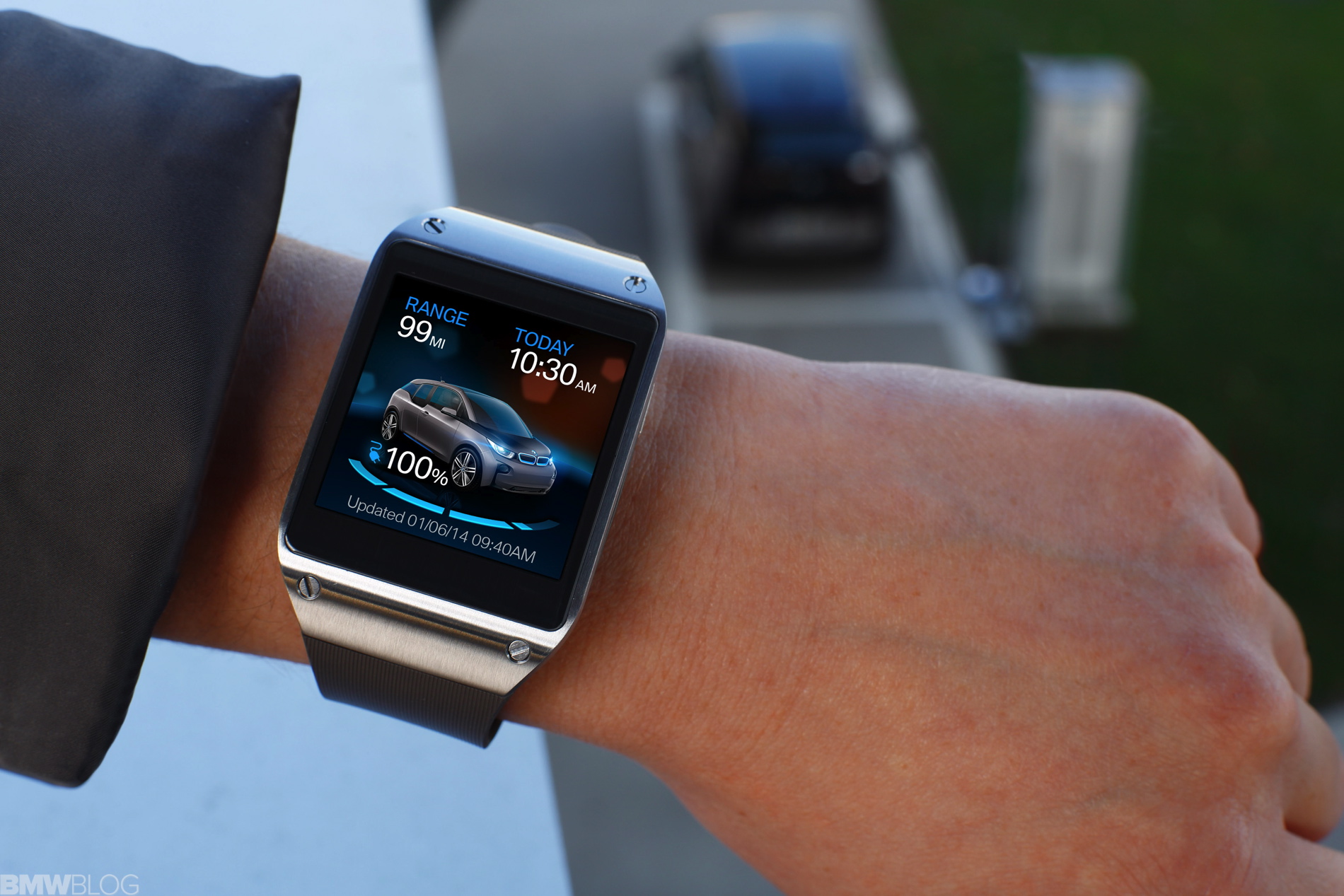 The rapid spread of smartphones means that the internet, apps and digital services have long since become established elements of daily life. Wearable devices like the new Samsung Galaxy Gear are driving this trend ever onwards.

These devices are worn like wristwatches and display information from a linked smartphone directly onto the user’s wrist. At CES 2014, BMW became the world’s first carmaker to present vehicle functions on the electronic wristwatch as part of a research application. The Samsung Galaxy Gear with BMW i Remote App functions has similar attributes to the BMW i Remote App, which keeps drivers connected with their BMW i3 at all times. 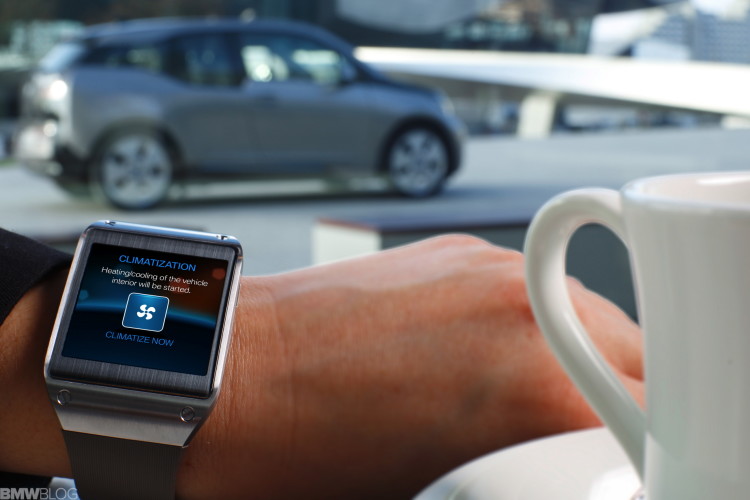 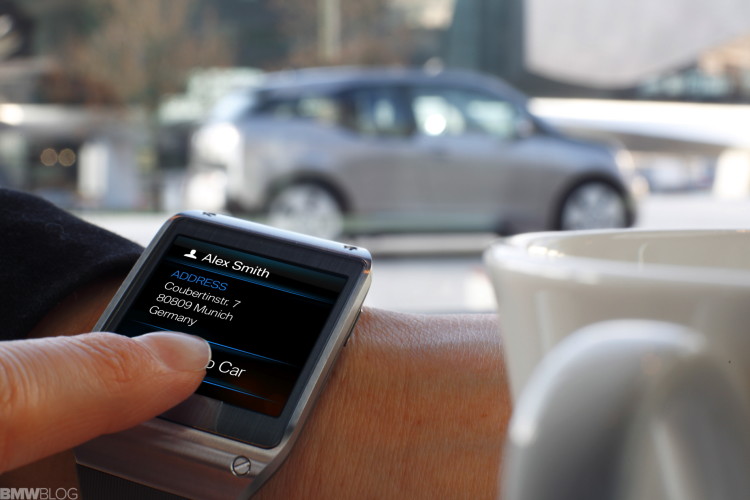 The app also works efficiently to provide drivers the assistance they need outside the car. The Samsung Galaxy Gear with BMW i Remote App functions offers information on the battery charge and available range of the first all-electric premium model in the compact class, as well as any departure times that have been inputted. The research application also shows whether the windows, doors and sunroof are closed and gives users the option of sending a navigation destination to the vehicle and adjusting the interior temperature in preparation for a journey.

The BMW i3 – with its integrated SIM card – is the world’s first fully connected electrically powered car; in no other model will you find such a high level of interaction between the driver, vehicle and outside world. The presentation of the BMW i3 brought with it the debut appearance of the BMW i Remote App, which allows drivers to share information with the vehicle at any time via their smartphone. They can check whether the windows are shut, for example, or lock the car remotely. And now BMW is using the CES to present a new research prototype – the Samsung Galaxy Gear™ with BMW i Remote App functions. 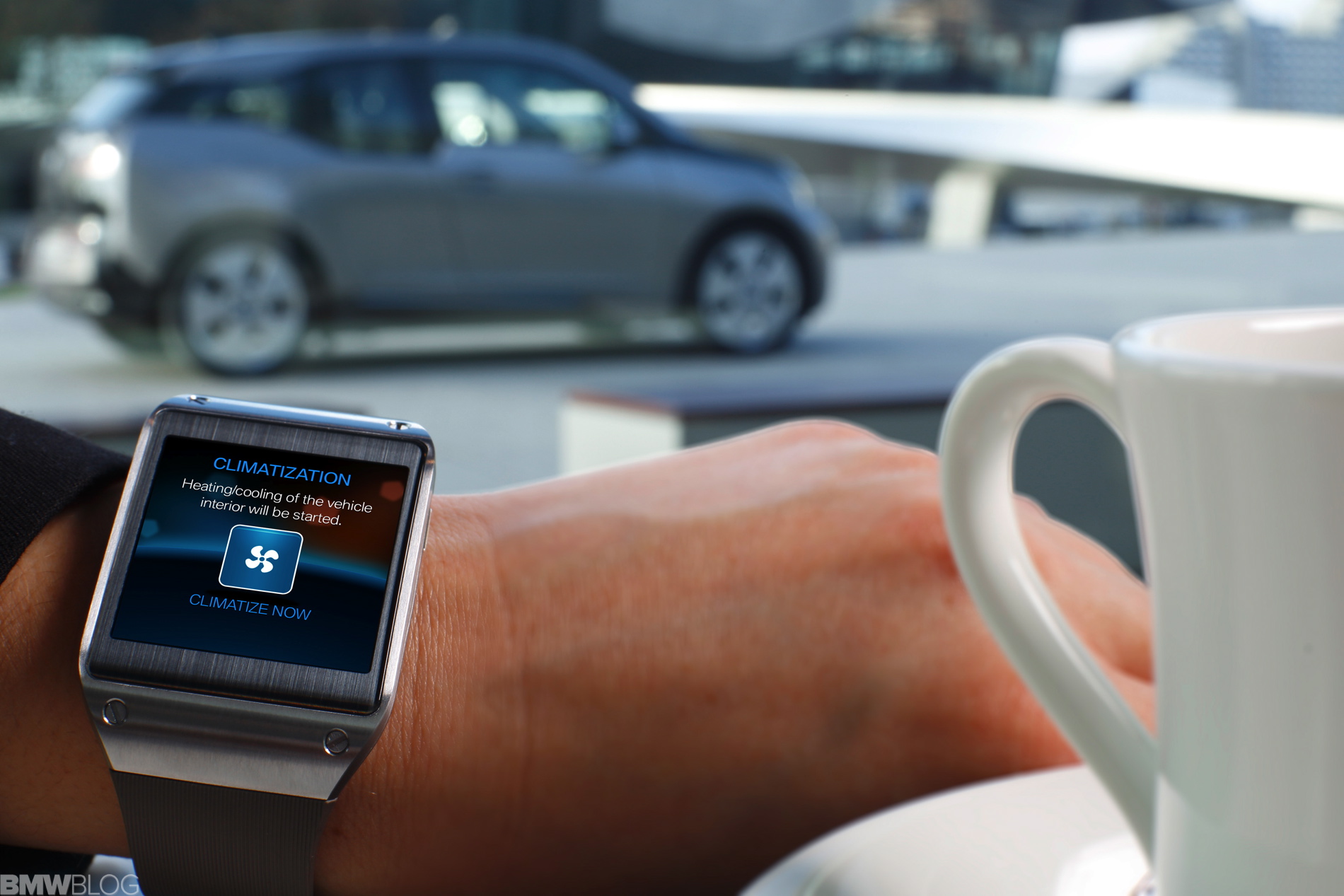 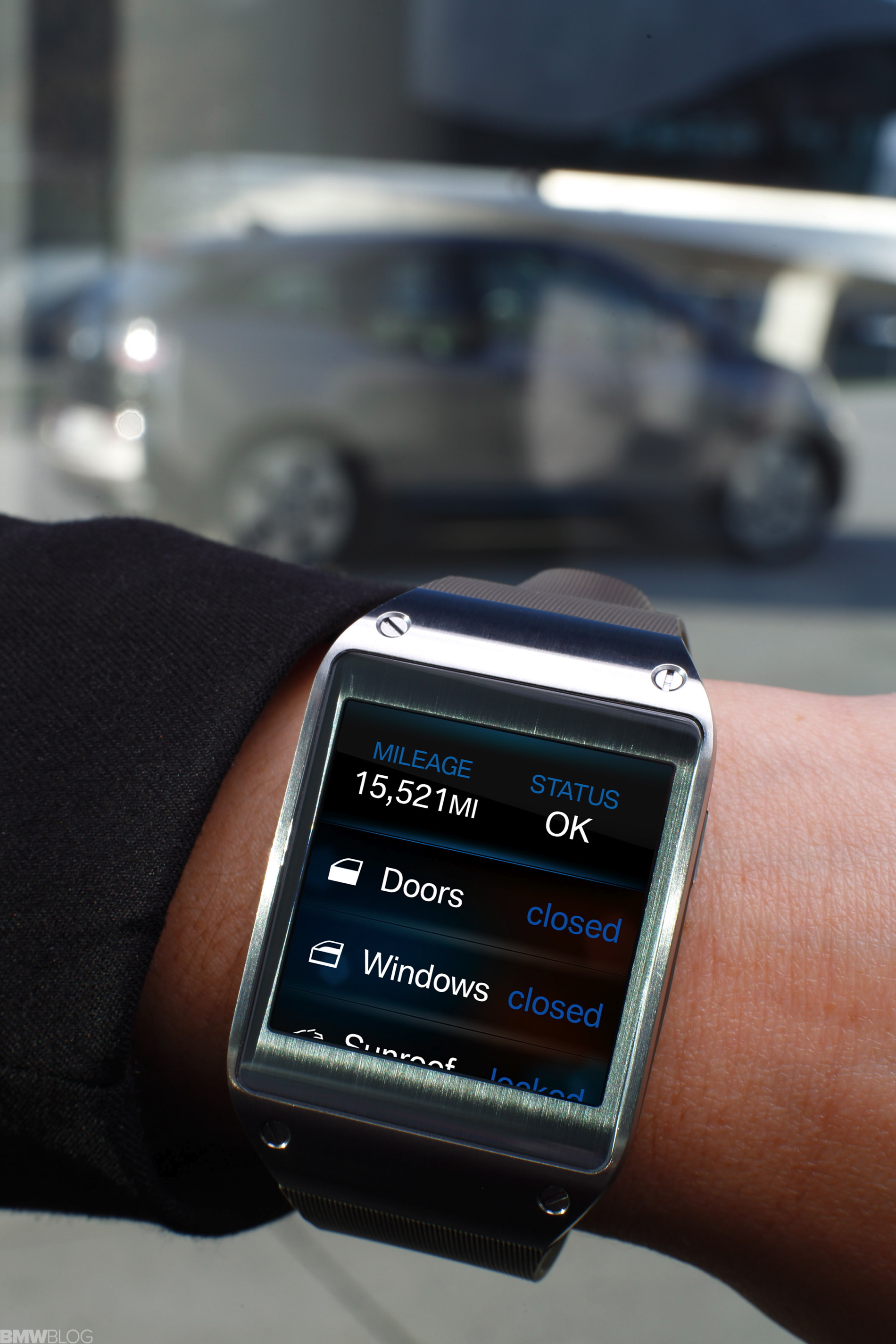 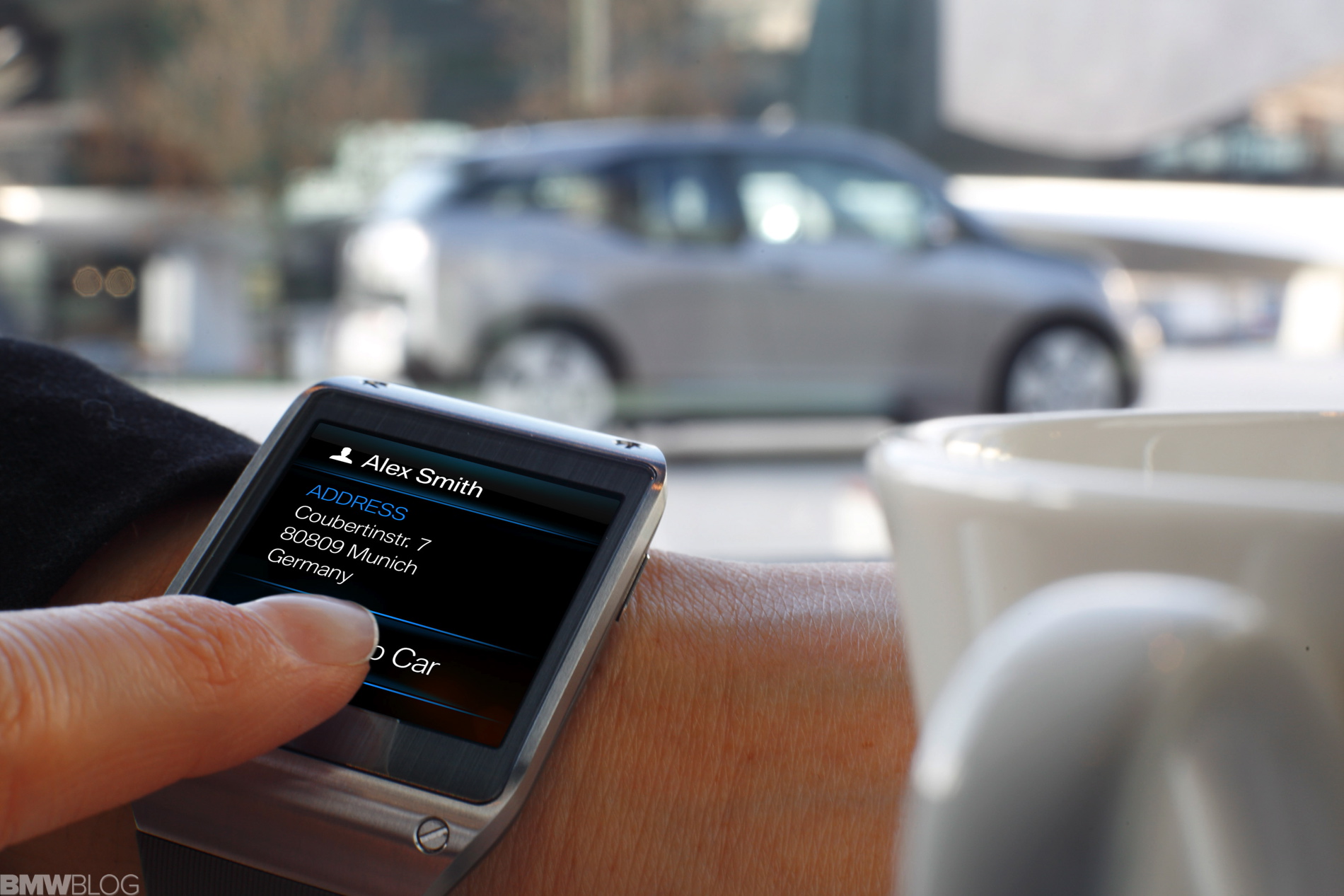 The arrival of smartphones has changed our everyday lives for the long term, with internet and digital services now something we take for granted. Wearable devices like the Samsung Galaxy Gear can further boost this trend and fundamentally change the way we use mobile devices all over again. The Galaxy Gear is worn on the wrist and cleverly complements the linked smartphone. Users can view important information on the Gear without having to take their smartphone out of their pocket, unlock a screen or enter a code.

The BMW i Remote App research application developed by BMW greets the Samsung Galaxy Gear user’s first glance with not just the time, but also the BMW i3’s range on electric power, battery charge available and any inputted departure times. Using the Galaxy Gear’s touch display to click on the figures sent by the application opens a sub-menu containing more detailed information, which is presented in the hallmark classy colours and style of BMW i. Another sub-menu informs the user of the vehicle’s current status, such as if any of the doors, windows or the sunroof are open – data which is also offered by the BMW i Remote App. The research application additionally enables users to send navigation destinations to their vehicle and to regulate the climate on board – all of which provides a fine complement to the Gear’s ability to deliver information quickly, directly and in real time.

The Samsung Galaxy Gear with BMW i Remote App functions research prototype represents an excellent smartphone add-on for linking customers seamlessly with their BMW mobility ecosystem. At the same time, the application is proof of how quickly BMW ConnectedDrive can and will react to the rapid pace of innovation in the entertainment and infotainment sectors through the introduction of clever solutions.

4 responses to “BMW i3 and the Samsung Galaxy Gear”