The new MINI – the evolution of an icon

Home » The new MINI – the evolution of an icon 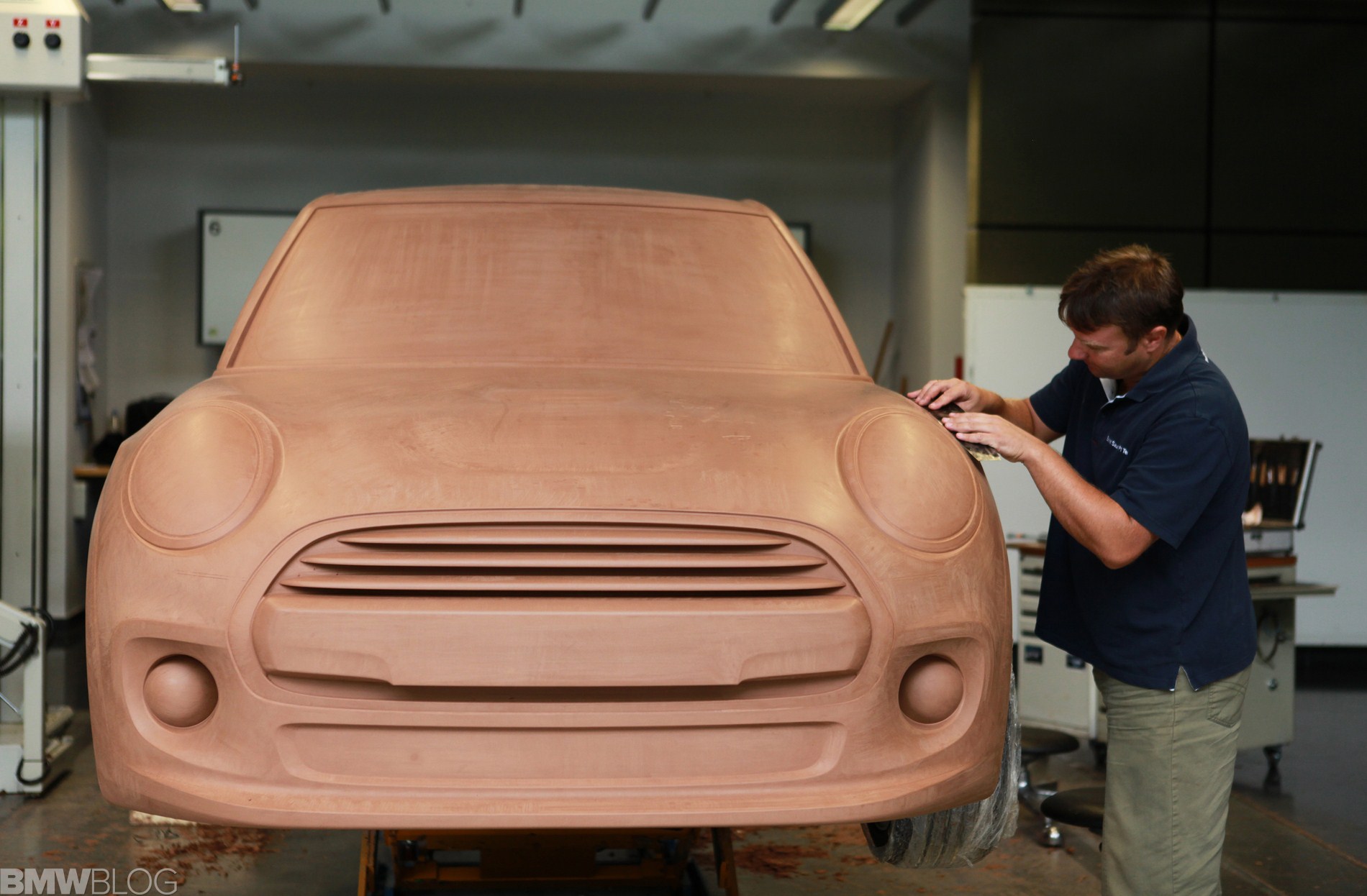 With its unmistakeable design and undiluted driving fun, the first example of the classic Mini sparked a revolution in the car market when it entered the fray in 1959. Then, in 2001, the new MINI emerged from the BMW Group stable to lead the premium compact class into the new millennium. And now MINI is poised to set new standards once again when it unveils the latest incarnation of this iconic car on 18 November 2013.

The new MINI is one thing above all else: a typical MINI – in its most concentrated and contemporary form. A car built for individualists, it whisks the legendary forms of the classic Mini from 1959 into the present day and takes to the stage with greater presence and maturity than ever. “The new MINI generation strikes the perfect balance between MINI heritage, future-defining forms and innovations,” says Anders Warming, Head of MINI Design. 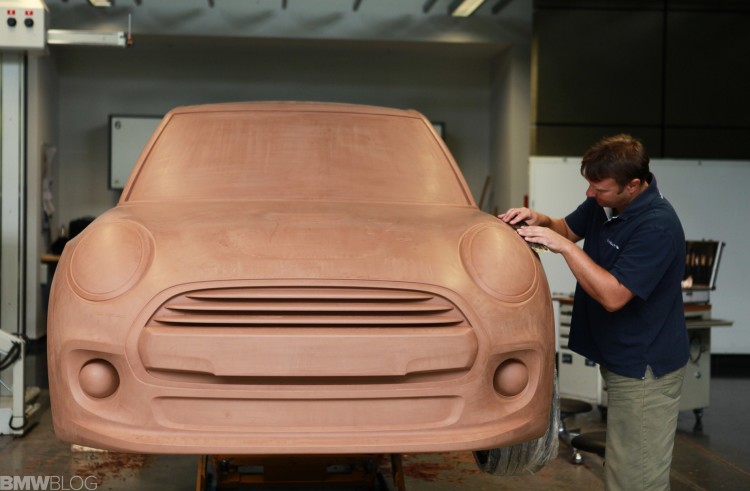 At first glance, the new MINI cuts a familiar figure. Its snappy proportions, short overhangs andhallmark “stance on the wheels” reflect the agile driving characteristics of the MINI. Look again more closely, however, and the new MINI reveals its enhanced design qualities. The new generation brings even greater precision and class to the car’s classic iconic features, in particular. Keen to express the characteristic form of the hexagonal radiator grille more clearly, the designers have introduced a smooth, one-piece chrome frame for the first time.

The design of the lights has also been revised. With their new graphics and clearly structured inner workings, the headlights and rear lights accentuate the more grown-up appearance of the new MINI. The trapezoidal rear lights of the previous model are now larger and have greater presence, and they more closely resemble rounded-off rectangles from the outside. As before, they have chrome ring surrounds, and now they extend into the boot lid. Positioned far to the outer edges of the car, the rear lights also underline the prominently sporting stance of the new MINI. The new model is the first car in its segment to be available as an option with LED headlights. 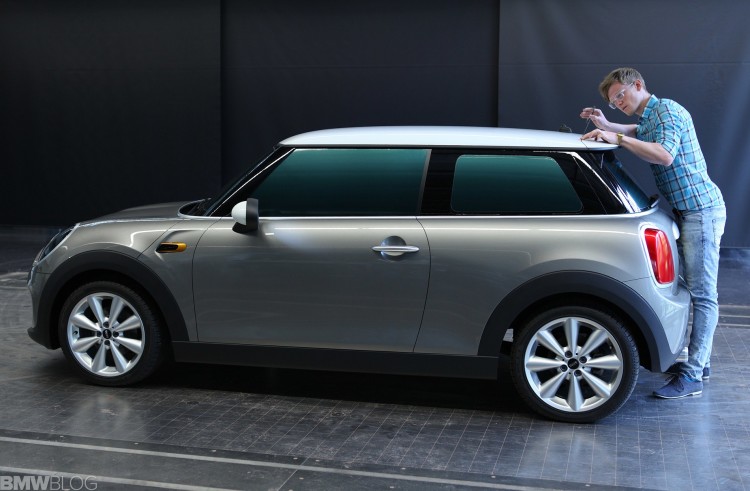 The defining design elements are expressed with greater intensity than ever. Additional creases trace the outlines of the headlights, wheel arches, headlights and rear lights to the side, giving the design a more striking and contemporary edge. A selection of detailed stylistic embellishments reflects the more mature character of the new MINI. For example, an arrow-shaped dynamic line shapes the newly interpreted turn indicator units. Chrome elements on the radiator grille, lights and door handles draw the eye to typical MINI design cues, and the optional Chrome package brings an extra splash of exclusivity to the exterior of the new MINI.

The proportions of the latest-generation car remain unmistakeably MINI. Although it has grown by around 10 centimetres in its latest guise, the relationship between its dimensions remains unchanged. Short overhangs, plus the lights extending round into the car’s flanks at the front and rear create a short and agile impression despite the car’s longer exterior measurements and help give the MINI its familiar compact overall impression. The designers have added further bite to the car’s crisp, sporty appearance by moving the radiator grille back as far as possible towards the front wheels. 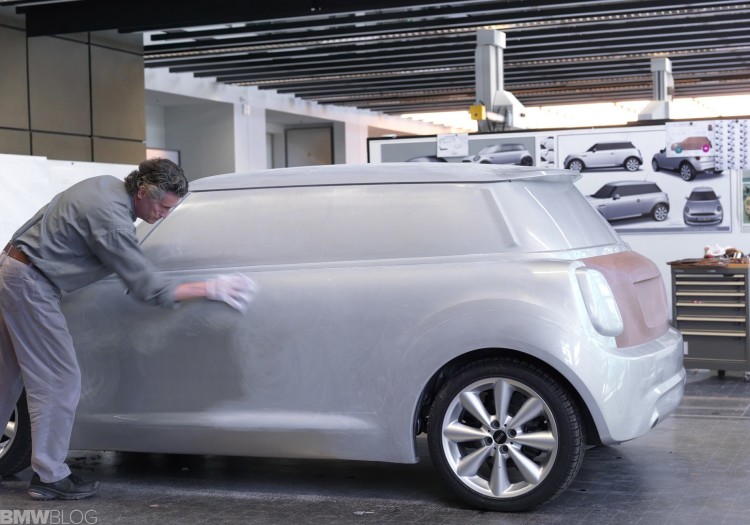 Among the features designed to enhance the car’s dynamic looks is the improved flow of its lines. This design cue is clearly visible in the newly designed flanks, which now exude even greater energy and verve. Plus, as the window graphic tapers towards the rear, it lends the sides of the car a dynamic wedge shape, which draws attention to the forward-surging presence of the new MINI.

The slightly downward-sloping roofline makes the car feel as if it is powering forward before it has even moved. The roofline is more substantial than its predecessors and continues the sweep of the windscreen, bringing the driver into the visual centre of the new MINI. At the same time, the roof appears to be floating over the car, emphasising the hallmark MINI three-way split of body, glasshouse and roof.

Among the drivers behind the new car’s powerful and planted stance on the road are its prominently flared wheel arches. In order to give the latest MINI an even sportier and muscular appearance, all design elements – such as the rear lights – are positioned as far as possible to the outside. 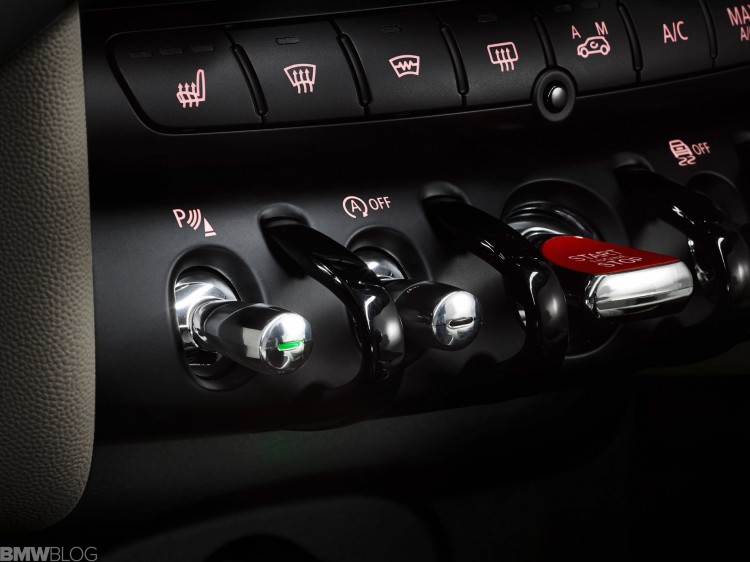 The new MINI remains true to its principles by using creativity and innovation to offer customers maximum versatility and interior space despite minimised exterior dimensions. But a MINI would not be a MINI if it didn’t constantly re-invent itself. Indeed, for the first time all driving-related displays, such as the speedometer and fuel gauge, are grouped together in a new instrument cluster positioned ahead of the driver on the steering column, directly in the line of vision. There is no Centre Speedo in the classical sense. The circular central instrument remains in place but it no longer contains an analogue speedometer. Instead it has morphed into a graphics-based element displaying various functions, notably the car’s entertainment and navigation systems and other infotainment features. A new interface and an interactive LED display ring create an emotionally invigorating overall experience. The electric window switches and handbrake are now within easier reach. The chrome window toggle switches are now integrated into the armrests, making them comfortable to use. The handbrake is located in a driver-focused position on the left-hand side of the re-designed centre console. 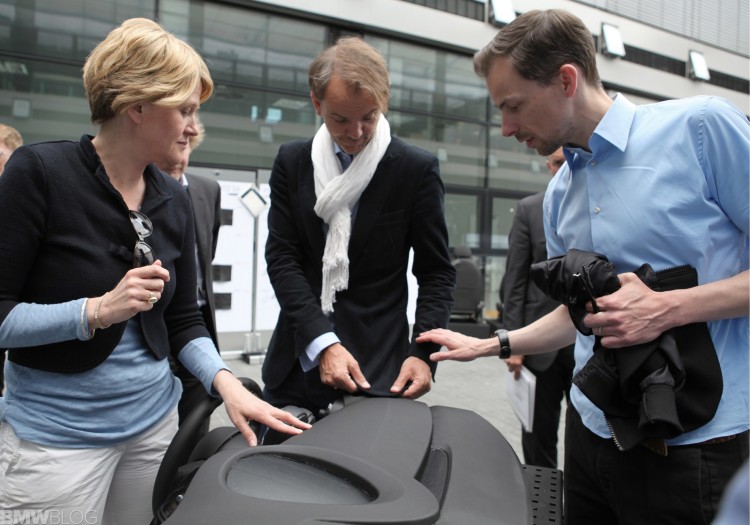 Likewise hot off the press is the optional Head Up Display. This system uses a combiner to project information such as the car’s speed and navigation instructions into the driver’s field of view. The image appears as if floating over the bonnet ridge. This has the advantage that the driver does not have to adjust his focus away from the road and refocus his eyes between areas close to the car and objects further away.

The extremely horizontal emphasis of modern dashboards creates a generous feeling of space; surfaces are tightened and have more precise edges. The dashboard’s upper cover provides a flowing surface over the instruments and provides them with an upper border. The central instrument and circular outer air vents project out from the dashboard in typically MINI three-dimensional style. At the same time, the vents create an elegant transition from the cockpit into the door trim, where their form extends into an ellipse. The vent grilles on the right and left of the central instrument are less “playful” now and feature horizontal and vertical slats. 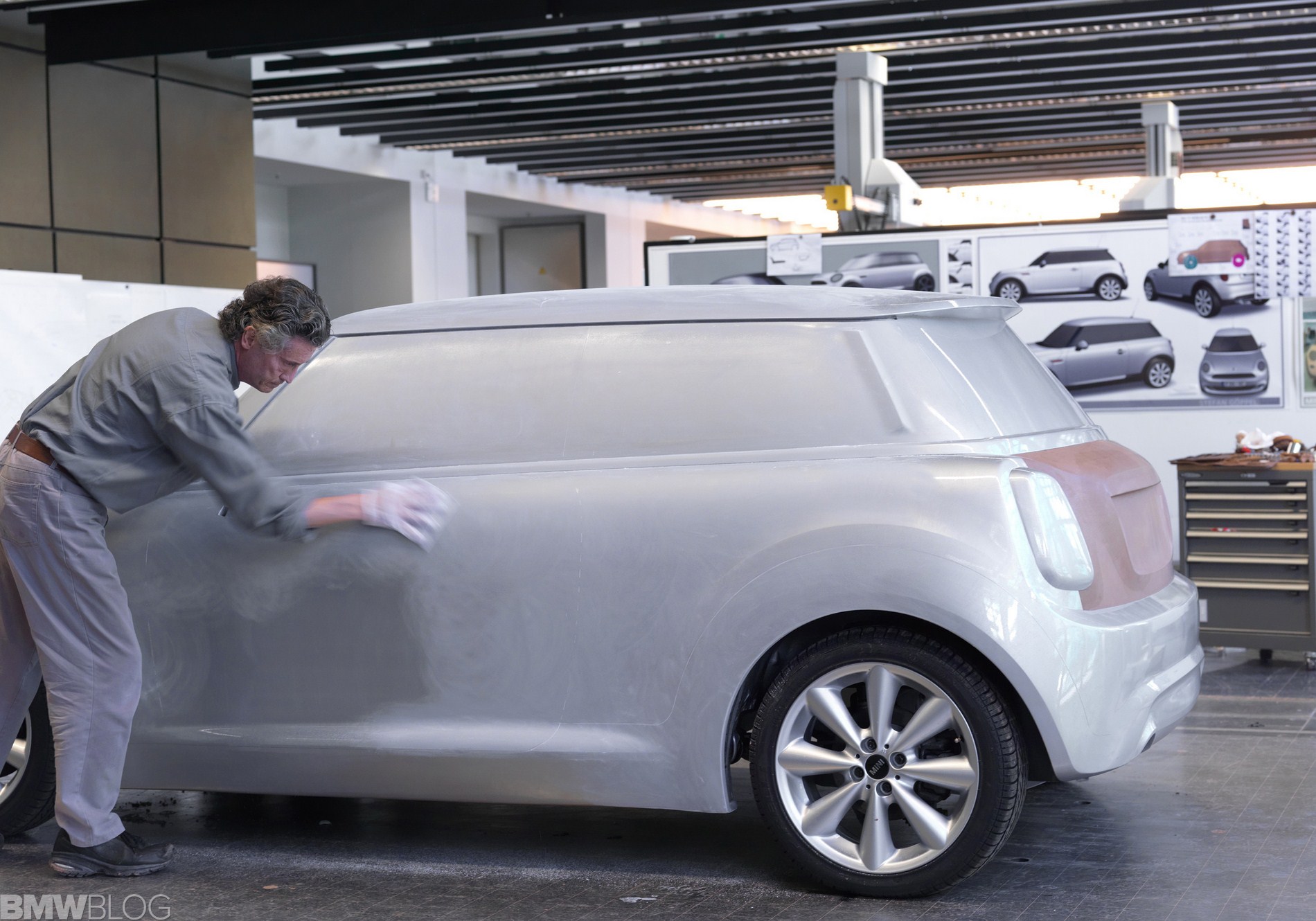 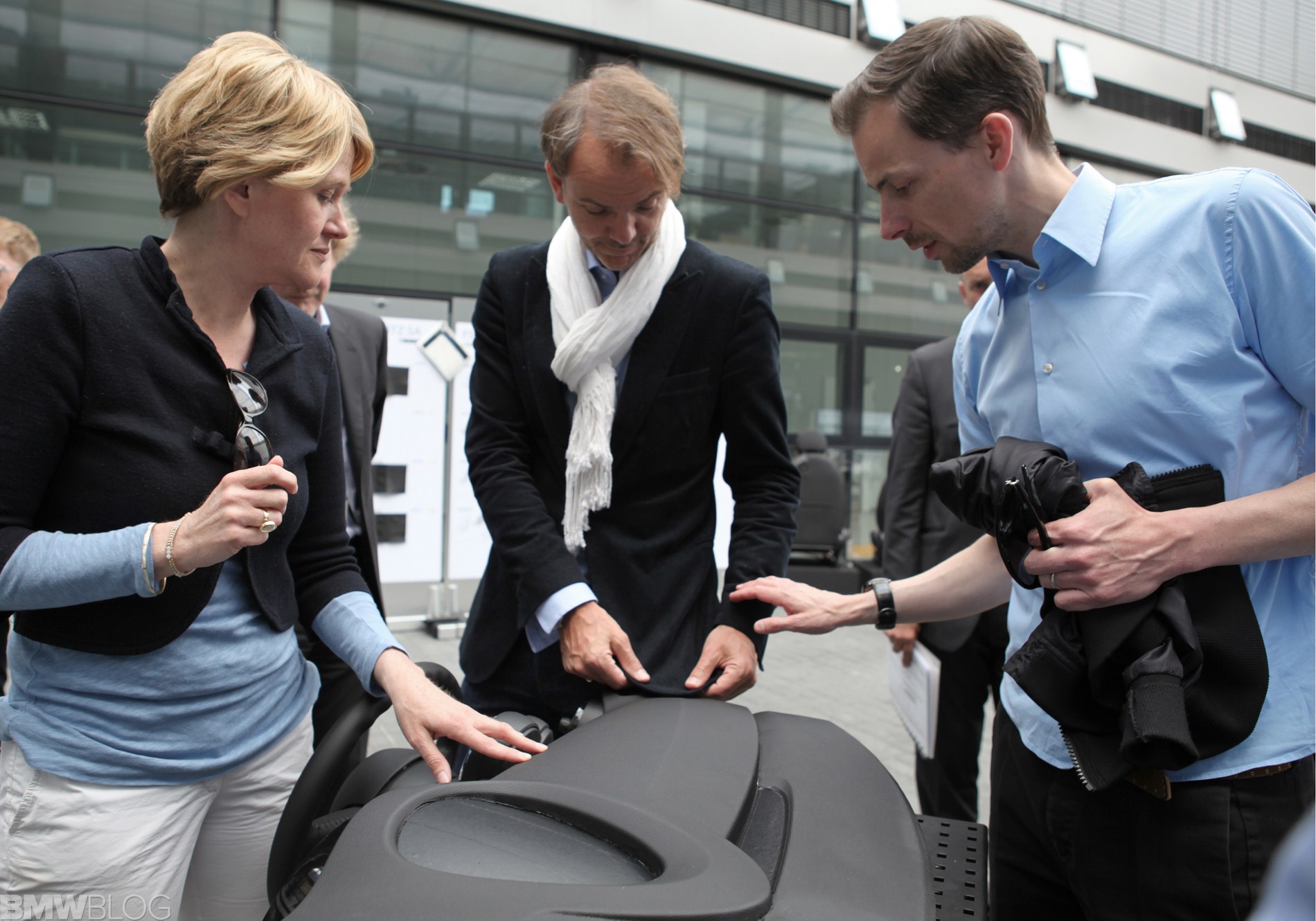 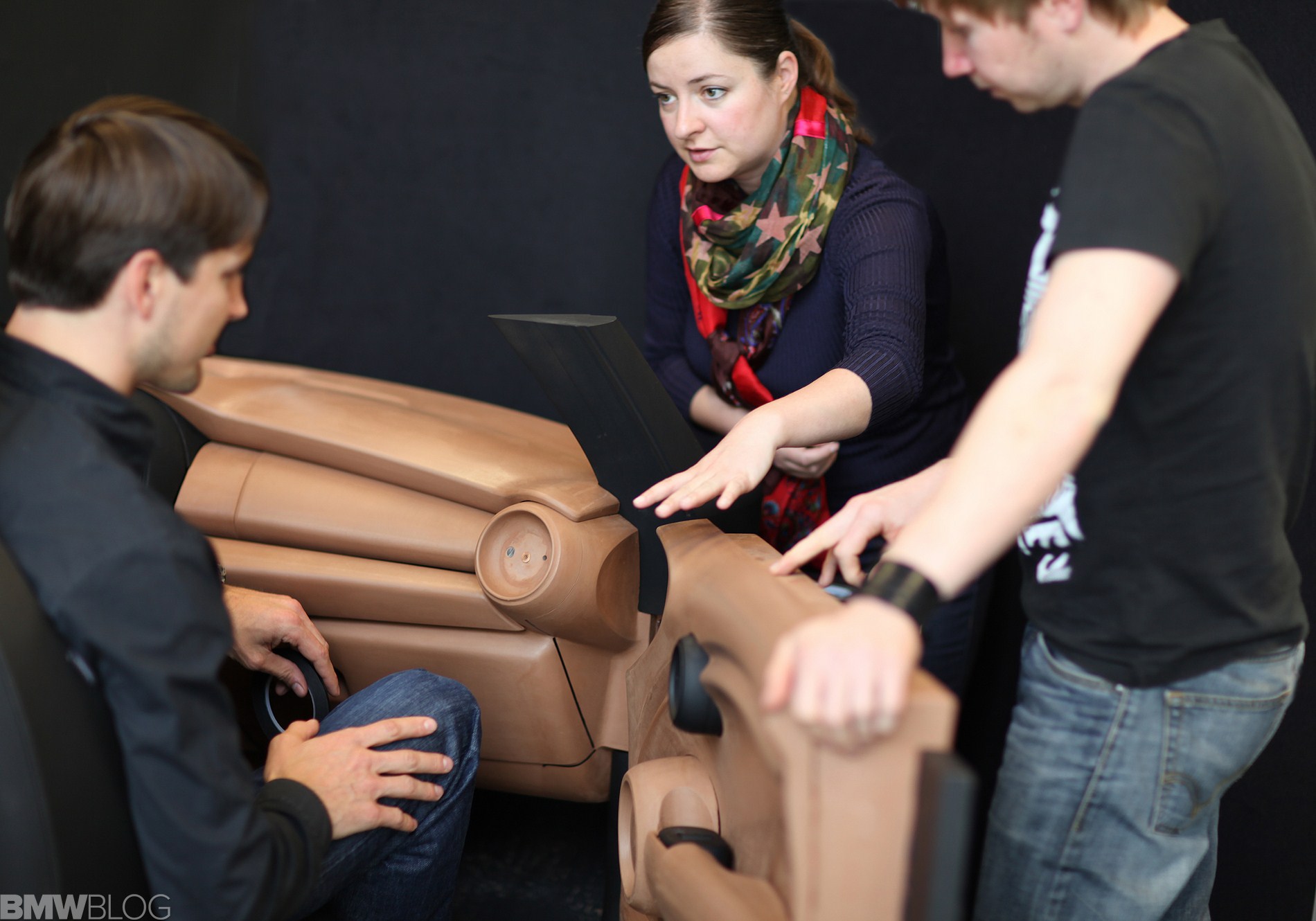 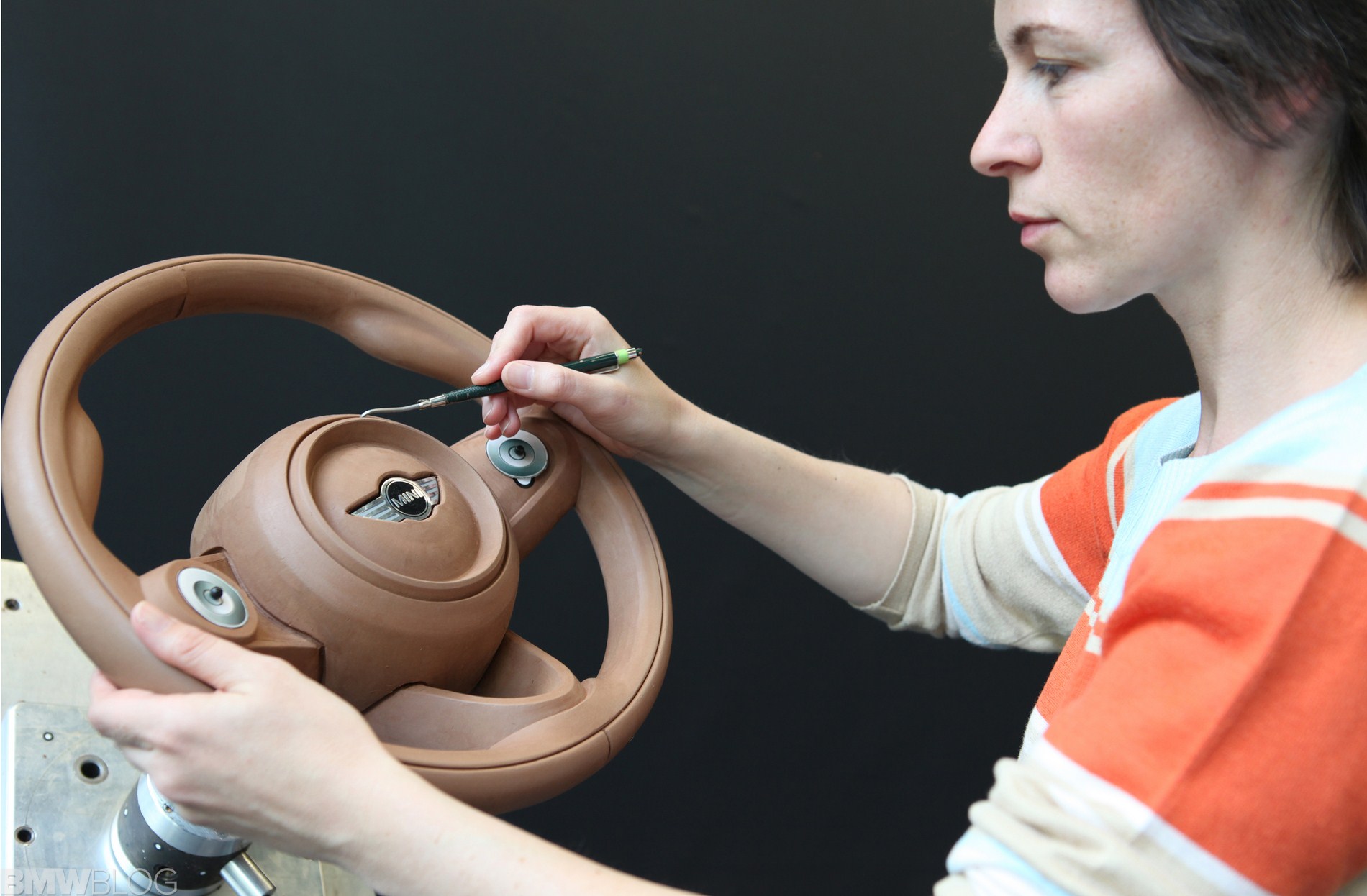 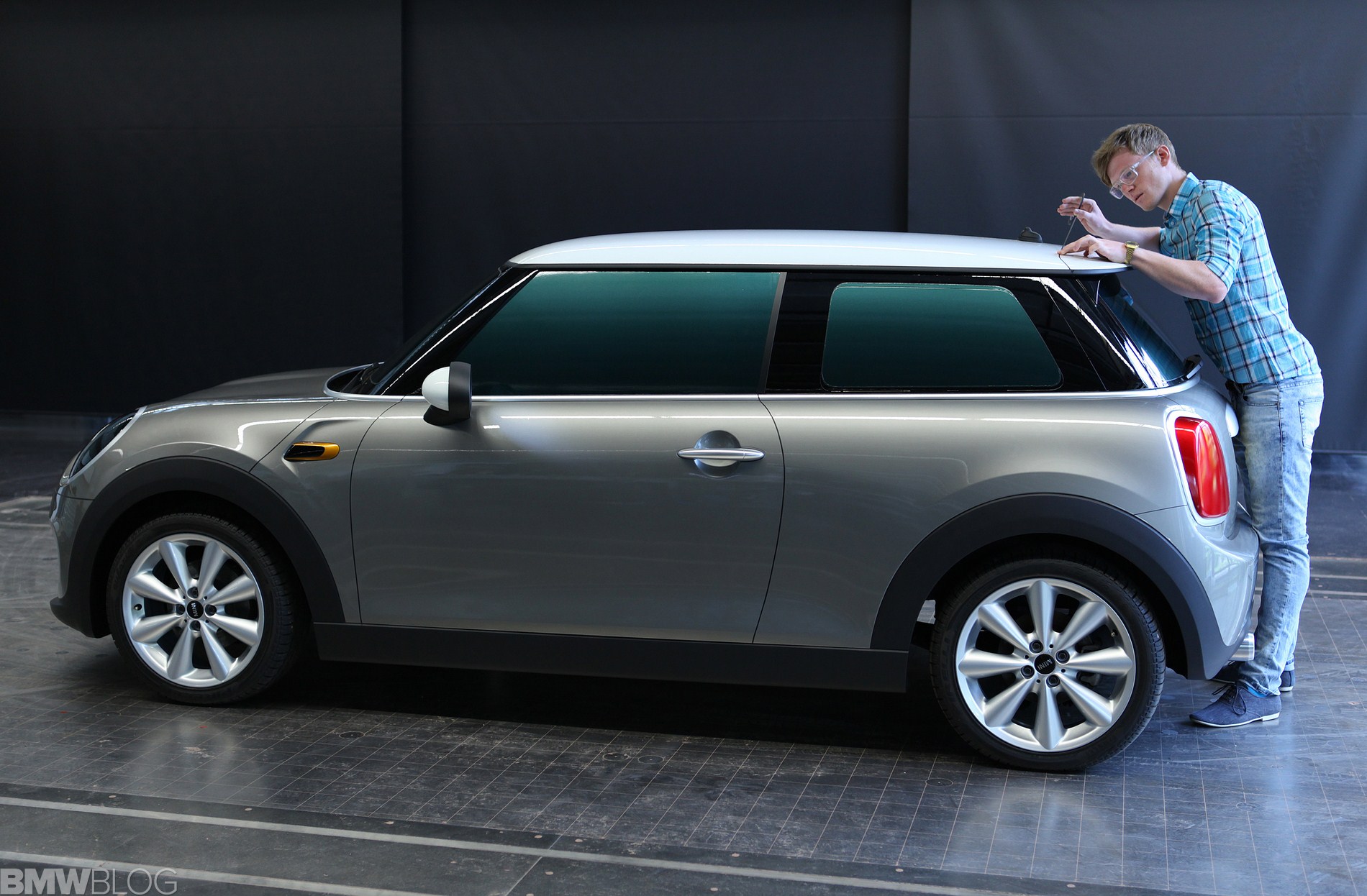 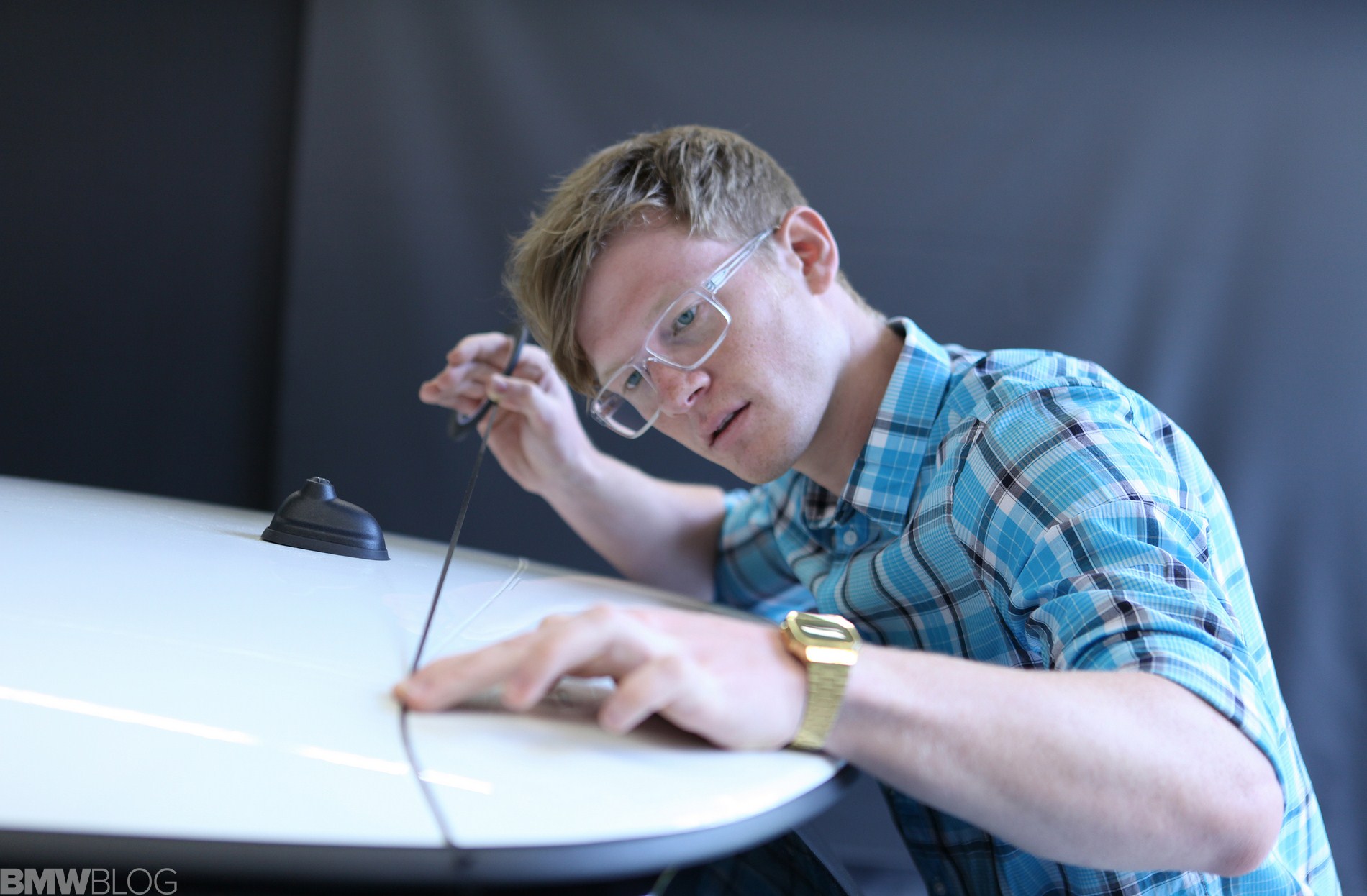 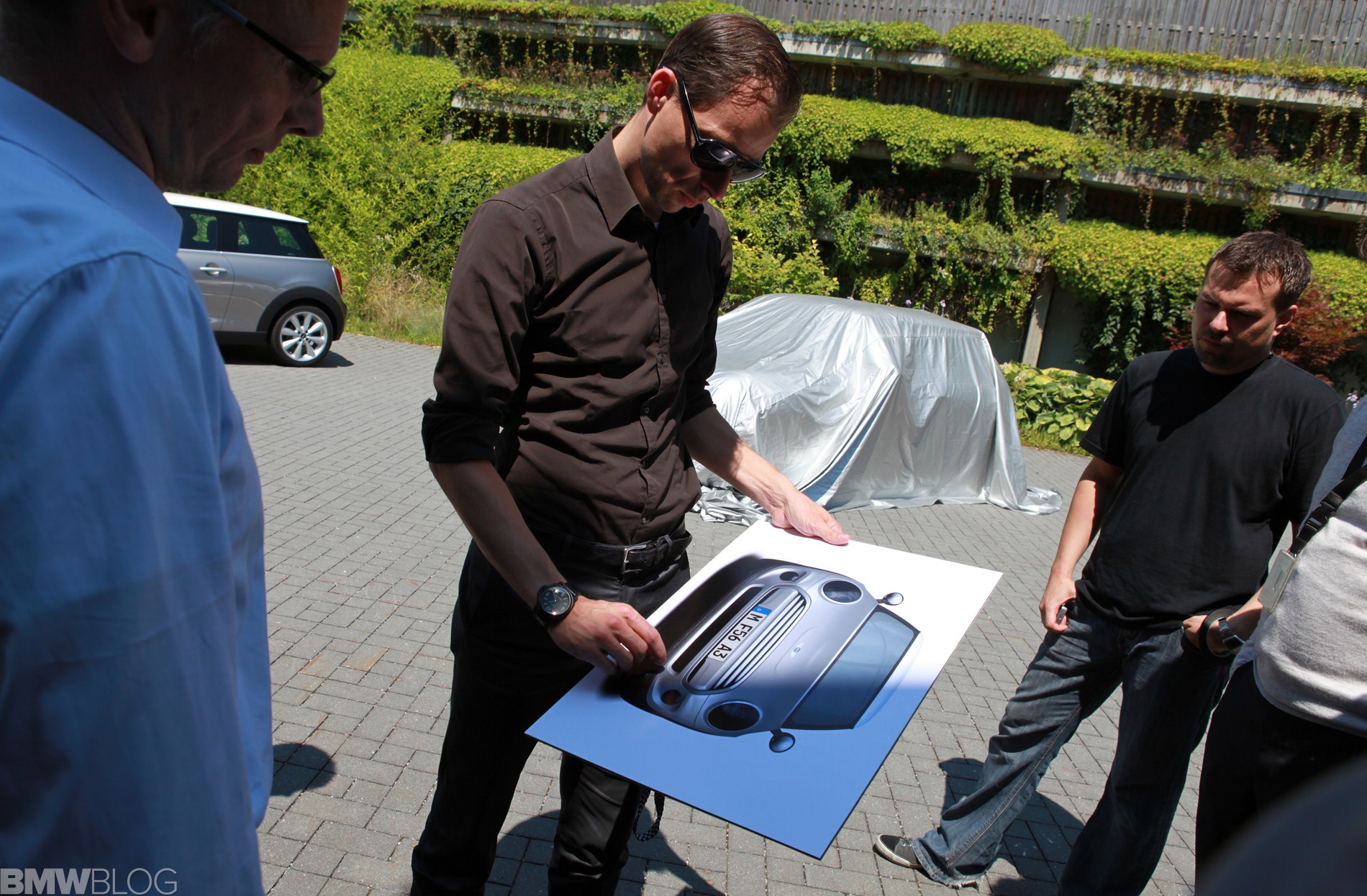 Atmospheric “Ambient Light” brings an enhanced feeling of space to the interior and accentuates the distinctive door design.

The rear seats have also been completely re-designed for the new model generation. The new car has a clear four-seat configuration, and the individual-seat character of the rear compartment is immediately noticeable. Indeed, the rear seats continue the sporty and grown-up theme of the new MINI in the rear of the car. The lateral support provided by the seats is designed to promote sporty driving, bringing the go-kart feeling into play for rear passengers as well.

The colour and material design: maximising the scope for customisation.

All MINI drivers have their own style. That’s why the new MINI also majors on maximising the scope for customisation. A large number of unusual choices inject fresh intrigue into the familiar MINI range of colours and materials and enable customers to configure their MINI to reflect their personality. For example, 12 exterior colours cover a wide variety of bases – from striking via sporty to elegant. The five new colours shades Volcanic Orange, Moonwalk Grey, Blazing Red, Deep Blue and Electric Blue freshen up the familiar MINI colour pallet and add exciting new options.

The MINI also offers scope for further interior customisation with a choice of five Colour Lines. Customers looking to personalise their car to the maximum can choose from 10 seat cover designs and other optional trim surface variants.

The two new colour and material worlds – “Off-White” and “Dark Cottonwood” – available as part of the MINI Yours interior style packages offer customers exclusive equipment variants that underline the individual character of the MINI.