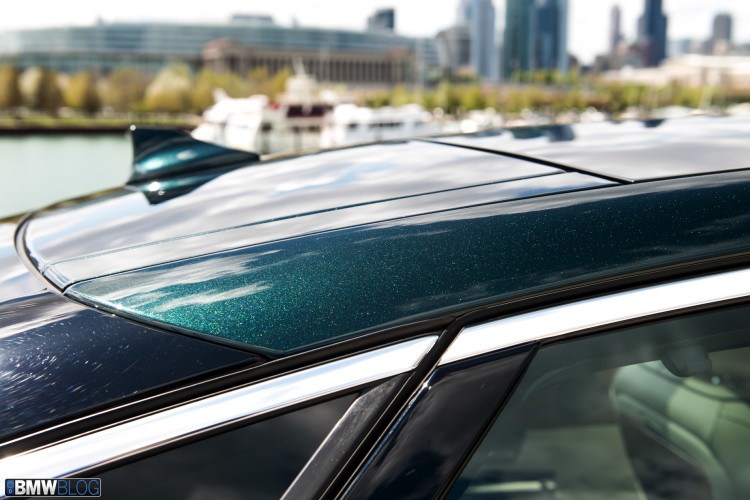 In 2011, Jaguar gave its XJ flagship a total reboot and introduced to the high-end luxury sedan market one of the few big vehicles constructed primarily of aluminum. To see how it compares to the BMW 7 Series, we spent a full week with a 2013 Jaguar XJL Portfolio.

The XJ lineup has been extended with the XJL model, essentially the extended wheelbase version of the four-door luxury sedan. The Portfolio designation comes from the highly configurable XJ and XJL family which can be as bespoke as you can go these days with a Jaguar.

The already sleek and sloping body of the XJ gets even better thanks to the extra 4.9 inches added to the XJL model. The 2013 Jaguar XJL has a wheelbase of 124.3 inches and overall length of 206.8 inches. The width has also been increased by 5 inches when compared to the shorter XJ. 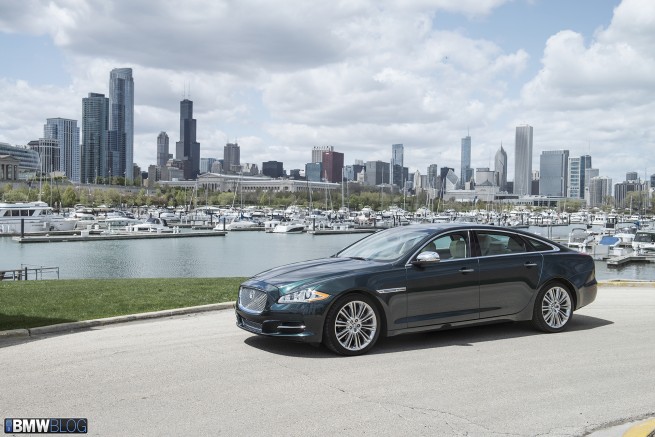 The design caters to those business men that are looking to make a statement when pulling up to a business meeting, or to an after work social event. The long and lean design comes with a gorgeous roofline, an unique rear pillar and short rear deck. The large and imposing front grille gives character to the car while the elongated LED headlights combine the latest tech with classic design.

Taillights are the most controversial part of the XJL’s design. Three red lines of light represent the scratching of a cat’s claws. Yet compared to the previous model, the new taillights design is fresh and bold. They flow with the body line perfectly and the three LED strips bring color to the rear end. It might not be everyone’s cup of tea, but they get our thumbs up.

Underneath the new design the British engineers have fitted one of the most advanced chassis in the luxury and heavy sedans market. The highly advanced (unique riveting and bonding processes) and of course costly aluminum chassis (with magnesium and other composites) allows Jaguar to have access to lightweight modular platform for models of different sizes. The 2013 Jaguar XJL Portfolio with its 5.0 liter engine weighs in at 4,220 lbs, lower than the Mercedes-Benz S-Class and BMW 750Li (4310 lbs). 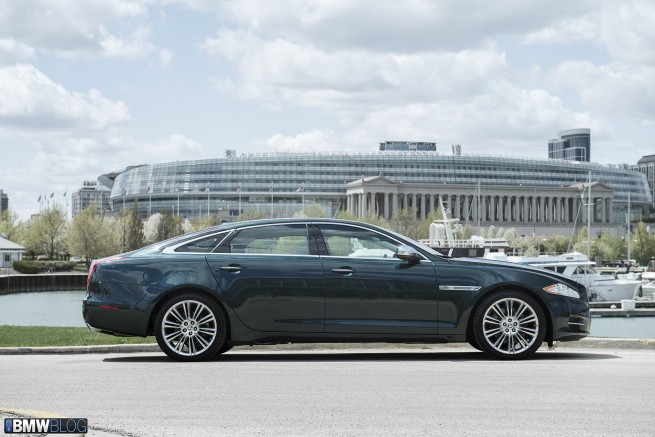 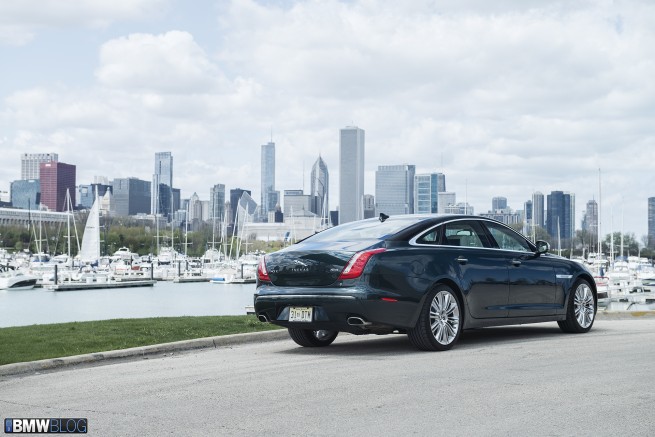 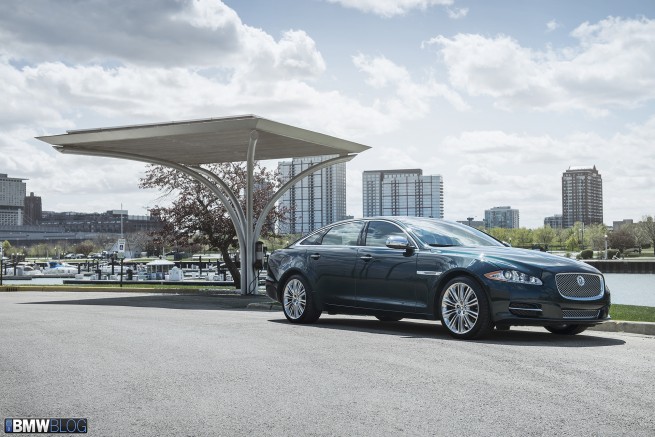 While the BMW 7 Series stands out with its combination of high-end luxury and sportiness for the interior design, the Jaguar XJL comes with a full list of amenities to ensure the driver and his or her passengers have a ride filled with luxury and comfort. Wood accents and trim dominate the design of the XJL, while the large center console becomes the pinnacle of the interior design. It takes a bit to get used to the interior design of the Jag, especially after spending most of our time inside BMWs, but we understand the idea of providing the highest level of luxury that it’s possible today without robbing a bank. The fully wrapped in leather interior also comes with heated, cooled and massaging seats that make long rides quite enjoyable. They guarantee you will arrive cool and refreshed after a long drive behind the wheel. The 16-way power front seats are firm and flat, a different approach from BMW’s wrapped-around-the-body seating. 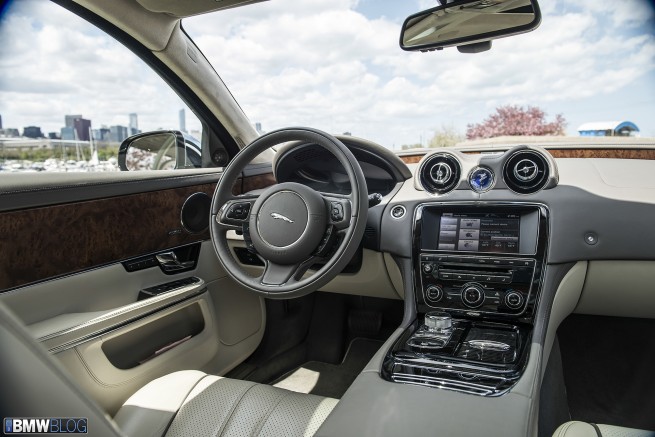 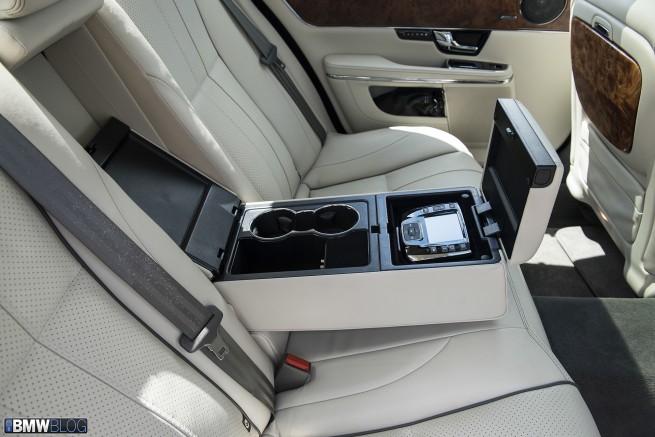 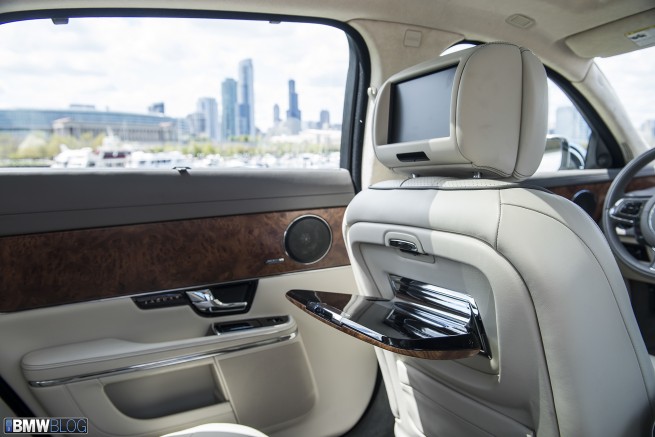 There’s loads of legroom in back, but headroom is limited by the sloping roofline.

Taking a page from high-tech, the Jaguar XJL aims to impress with a gear selector dial rise from the center console upon engine startup.

The flat panel with digital dials in front of the driver lacks usability partly due to a busy user interface design and small characters. The infotainment system, and its touchscreen sometimes, also needs some additional work. The Flash-based system operated via an 8-inch touchscreen needs more than simple tap to respond and the design of the user interface isn’t the simplest of the bunch. The abundance of small buttons makes it even more confusing to navigate through different menus. 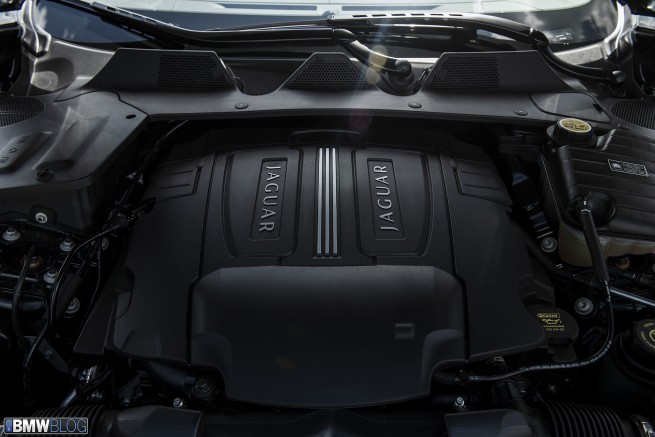 Our 2013 Jaguar XJL tester came with a 5.0 liter naturally aspirated gasoline, direct injection V8 engine that produces 385 horsepower and 380 lb-ft of torque at 3,500 rpm. Jaguar offers a 510 horsepower version of this engine for its Supercharged models. The transmission of choice is the all-new ZF 8-speed automatic transmission that replaces the previously used six-speed automatic. For this particular model, power was sent to the rear-wheels, but an all-wheel-drive variant is offered as well.

Just like BMW and Mercedes offers in the high-end sedans, the Jaguar XJL takes advantage of various driving modes activated through a push of a button. The Drive Control unit controls the active damping system and self-leveling rear air suspension. 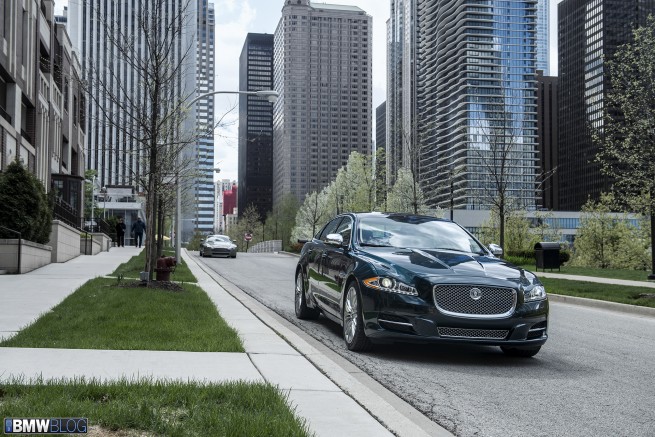 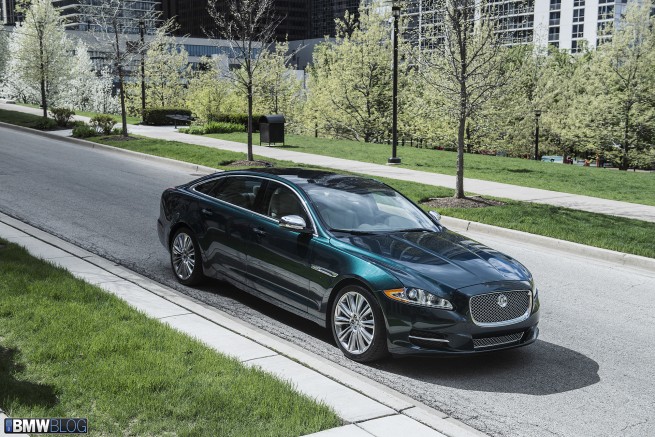 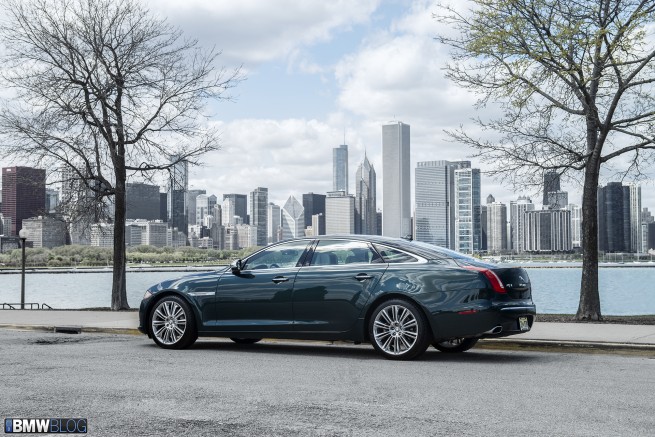 Thanks to its acceptable weight and length of 206.6”, the aluminum bodied XJL sprints from 0 to 60 mph in only 5.4 seconds. The V8 engine accelerates smooth without much effort in a quickly and elegant manner. The power is far from raw, but rather just right for this type of vehicle. The naturally-aspirated engine stands out as soon as you plant your foot on the pedal and delivers enough power to push you back in your seat. Could it be more fun with extra power? Without a doubt, but the 385 horsepower engine does a fine job maintaining a balance between performance and fuel consumption.

When compared to the BMW 7 Series, which comes with more ponies and torque in its 750Li variant, the Jaguar’s driving experience is different. There ride is less stiffer and aggressive than the 750Li when both are set in the sportiest driving mode. Again, something that doesn’t surprise us since the two cars are built under a different philosophy. A tough choice between the two, so the buying decision will end up being based on other features, or pricing.

After a few hundred miles in the 2013 Jaguar XJL Portfolio we came to appreciate the nice, quiet and isolated ride. As went through different driving modes, the throttle response and chassis settings varied from subtle to more aggressive, while the power steering received additional road feedback. The red gauges on the display indicate the sharper handling and throttle response.

Cornering Brake Control is another feature of the XJL, a torque-vectored braking system that helps with aggressive and hard cornering. We couldn’t fully experience this feature other than some occasional sprints through some backroads in the flat Midwest. Some body roll is present also, but that doesn’t surprise us when it comes to a vehicle of this size.

As we mentioned earlier, the 5.0 liter V8 385 horsepower engine delivers when it comes to efficiency. In the never ending Chicago traffic, we averaged 18 mpg combined figure. 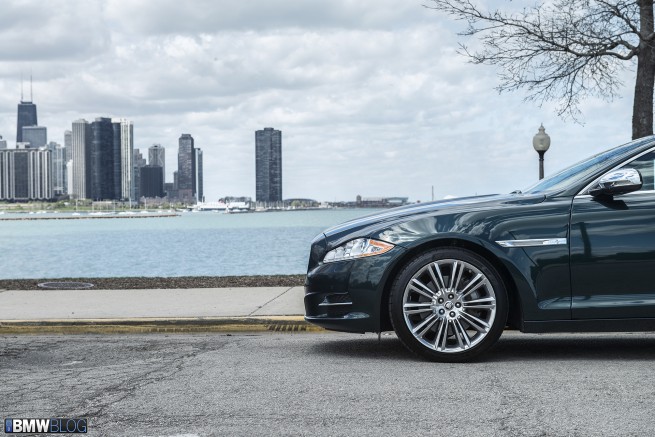 The 2013 Jaguar XJL Portfolio starts at $81,200, lower than similar offerings from Audi (A8L model) – $84,000, Mercedes-Benz S550 – $95,000, and BMW 750Li – $90,500. If price and luxury are your primarily purchasing points, then the 2013 Jaguar XJL Portfolio is a strong contender. If you’re looking for a bit more refined German engineering, and in some cases a more aggressive and sporty ride, then the other offerings in luxury sedans class are worth a look.

In a way, the XJL has carved a niche for itself and it has its own following based on the its legacy. The design is classy and refined, the aluminum chassis is innovative, but overall the Jaguar XJL lacks some tech features that we’ve come to love in other cars. Hopefully in the next generation, the Jag will also get an adequate infotainment system to close the loop inside the cabin. 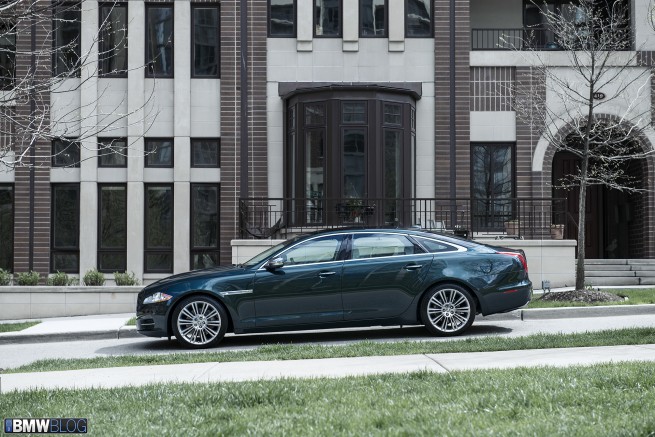