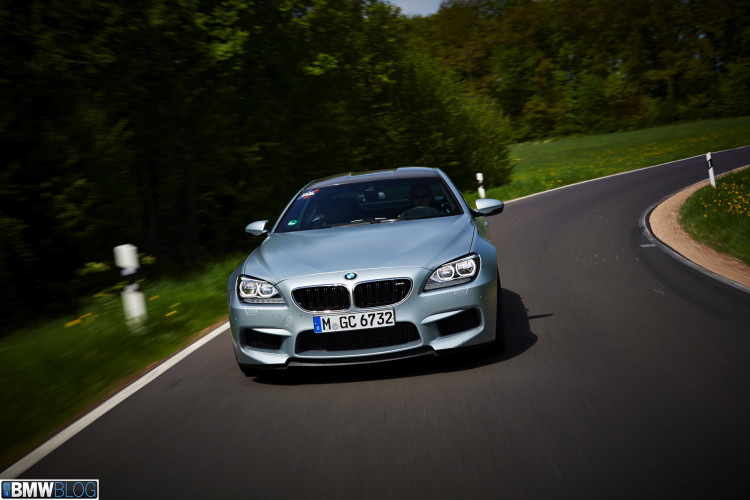 Since BMW released the 6 Series Gran Coupe in 2012, we have been looking forward to an M version of the sleek, sporty and luxurious four-door coupe.

Meet the 2014 BMW M6 Gran Coupe, the best M money can buy at this moment, and hands-down THE best looking BMW in the current lineup. For many buyers with deep pockets the BMW M6 Gran Coupe is a compelling choice: high-tech and luxurious interior, seats five people and has a folding rear seat, extreme power under the hood and excellent driving dynamics.

To test the full package at the highest speeds possible, we headed over to Munich to pick up a brand-new, recently broken in M6 Gran Coupe in the beautiful Frozen Silver color. Over the course of a week we took the four-door M6 from Munich to Prague, back to Munich and to Nurburgring, for a total of nearly 3,000 kilometers. Plenty of driving time to properly test the car in different driving situations. 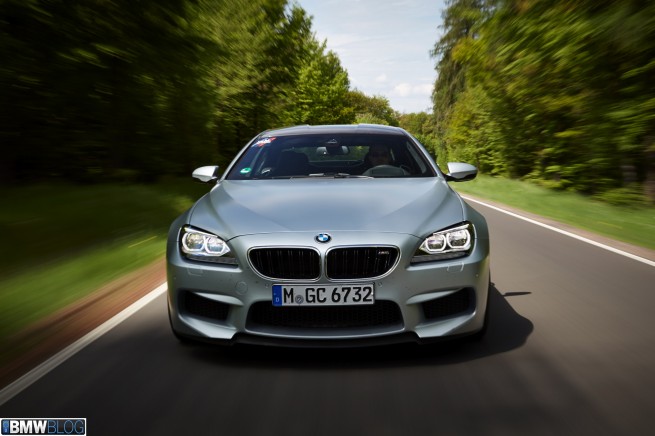 Built not only as a Gran Tourer but also as a track machine, the BMW M6 Gran Coupe escapes from the EfficientDynamics spell and packs BMW’s latest and greatest V8 engine. The S63Tü high-revving V8 engine with M TwinPower Turbo technology produces 560 hp (575 hp with the optional Competition Package) and 680 Newton meters (502 lb-ft) on tap between 1,500 and 5,750 rpm, while maximum output is developed between 6,000 and 7,000 rpm. The engine revs to a maximum of 7,200 rpm.

The top speed is limited in the US to 155 mph but our European model was topping off at 189 mph (305 km/h), exactly what we need for the Autobahn. While US customers get to pick a manual transmission as well, the rest of the world is stuck, and that’s a good thing, with the 7-speed M Double Clutch Transmission with Drivelogic. 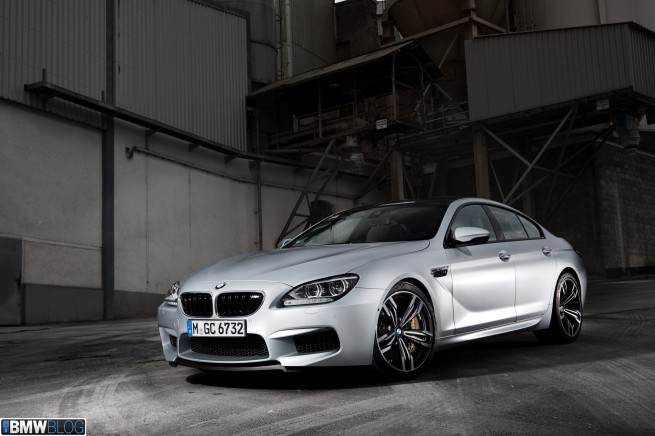 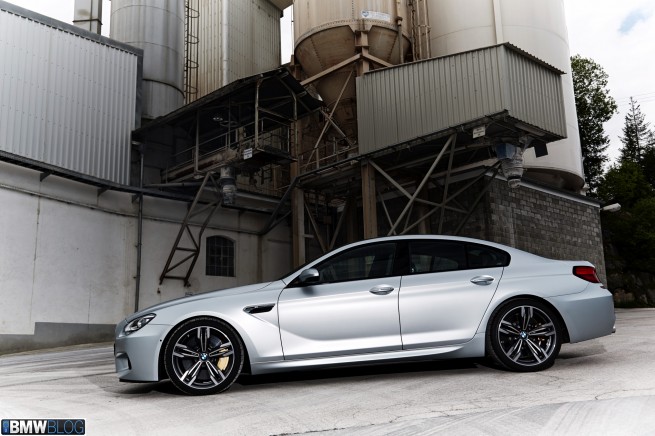 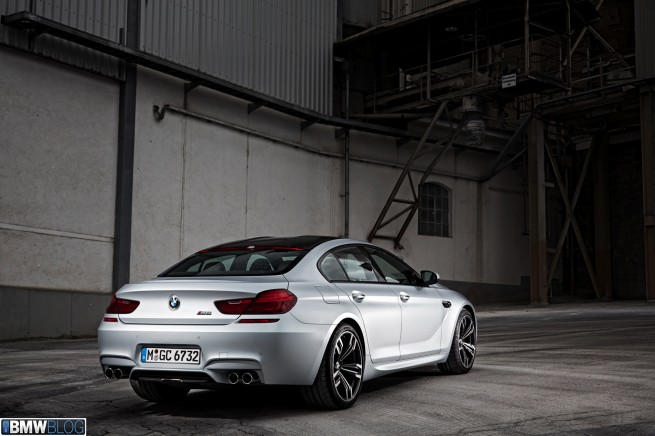 Luxury At Its Finest

Historically with the M cars, BMW emphasized the superior driving dynamics at the expense of high-end luxury for the passengers. But the 2014 BMW M6 Gran Coupe comes to change all of that. The four-door coupe with the M badge on the kidney grille brings the level of cabin luxury to a new level, comparable to the 7 Series flagship. The cockpit remains a driver-oriented affair with the typical sport accents surrounding the driver (sport steering wheel and seats, short M shifter and shifting paddles), but in addition BMW designers have paid extra attention to dress up the M6 Gran Coupe in some of the finest clothes: high-end wood trim, finest leather and contrast stitching. 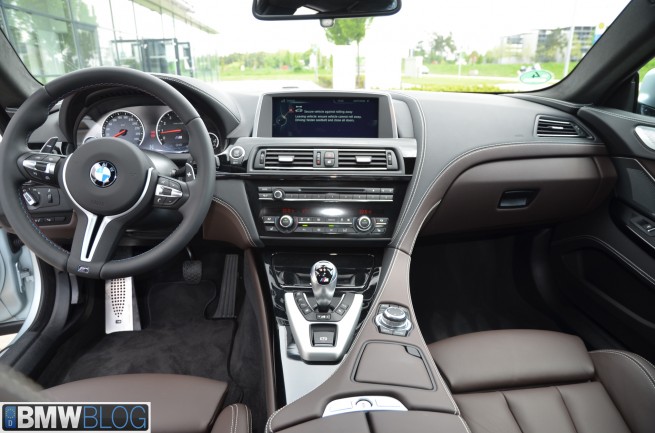 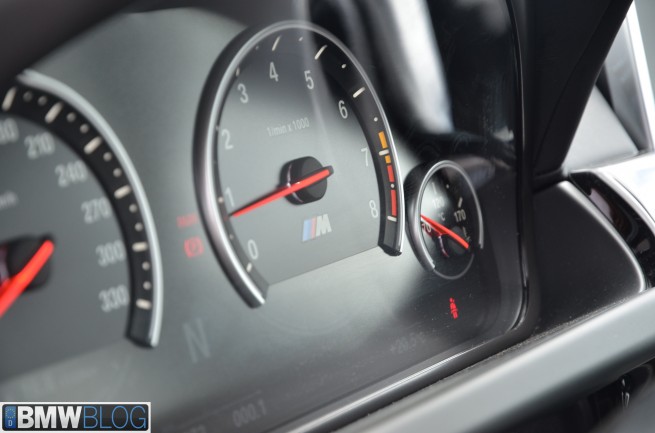 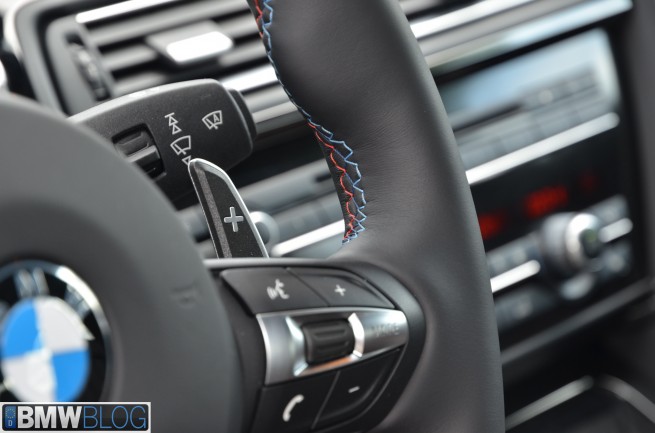 Rounding out the option list here are M Carbon Ceramic Brakes that become a necessity while “flying on the Autobahn” at 300 km/h. 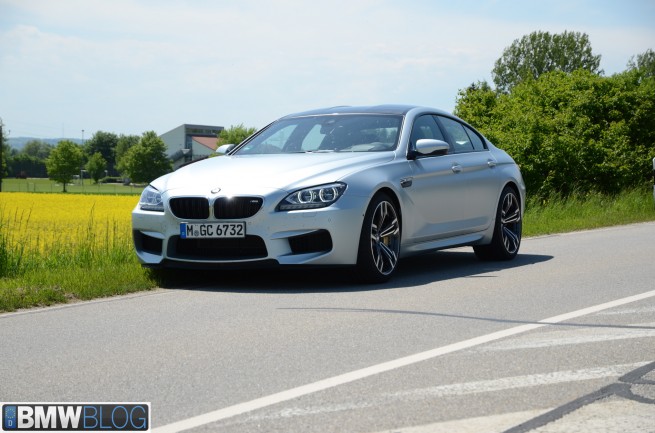 Frankly, we have tried hard to push the M6 Gran Coupe to its limits and find a breaking point, but the more we threw at it, the more impressed we were with its performance. Yes, it’s a quite heavy car, but the super potent V8 turbo and the careful tuned sport suspension make up for it.

First leg of our trip started on the Autobahn while heading towards the Czech Republic. Here we found ourselves driving on some of the finest roads in the world where drivers actually follow rules and allow you to properly experience the power of your car. After a few warm-up miles we planted our foot on the gas pedal, the growling sound from the back kicks in and just a few seconds later we found ourselves driving at speeds that will get you jail time back in America.

The straight and smooth roads are sympathizing with our super M by giving us the confidence to take it all the way. 250…270…300 km/h and the M6 Gran Coupe feels just as confident as it did back in first gear. The car is planted on the road, bodyroll is almost nonexistent while the Ceramic Brakes earn their money. And that’s a lot of money to be earned. 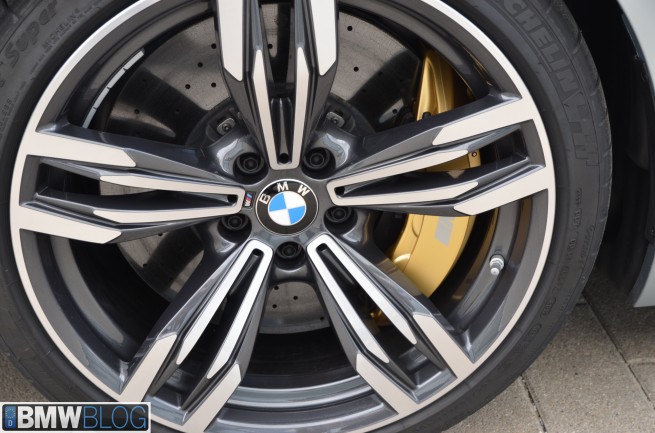 But shortly the long straights get boring and we asked our iDrive Navigation System for some backroads. A few minutes later we’re on the German countryside with narrow and curvy yet perfectly cemented roads. The adaptable dampers and steering on the M6 Gran Coupe can be switched between Comfort, Sport and Sport Plus, the latter being our choice for the moment.

Switching over to manual mode, we quickly run through all the gears via the shifting paddles mounted on the steering wheel. Speaking of steering, BMW decided to stay true to its engineering and kept the hydraulic system in place, therefore precision and road feedback are more evident than in other BMWs. 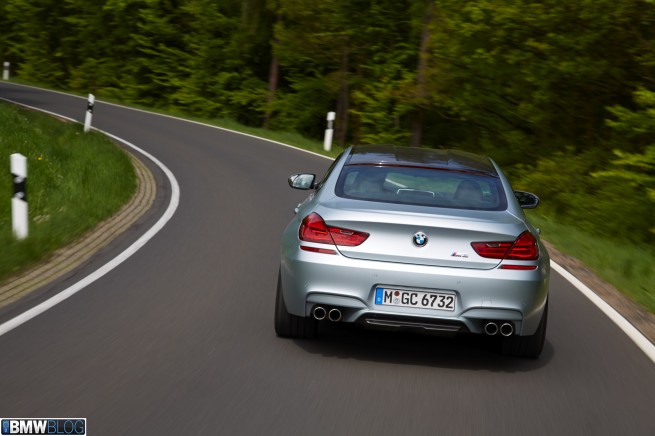 The power delivery is strong and linear and the M-DCT proves itself again to be worthy. 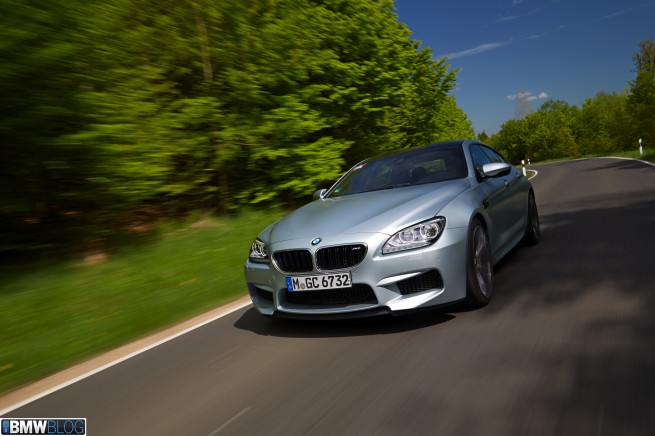 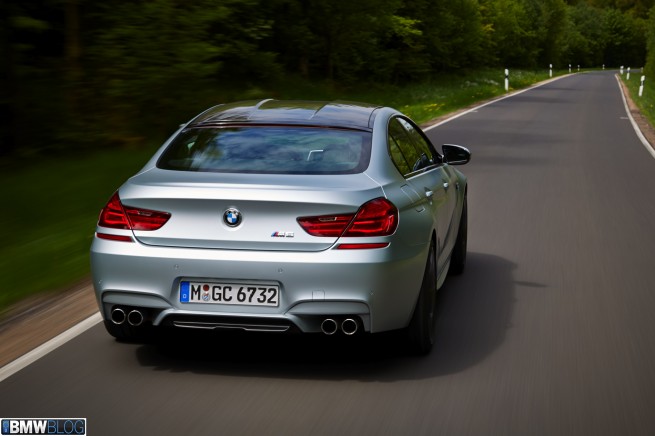 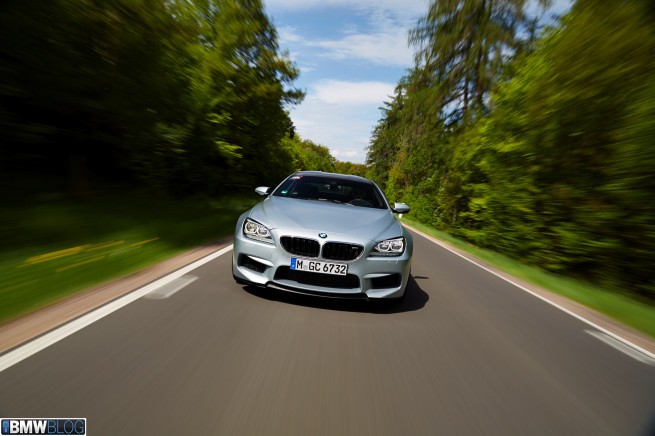 The 4.4 liter V8 turbo spools up without any lag and the DCT shifts up and down extremely fast and precise, all the way up to 7200 rpm. After about 100 miles of spirited driving we were ready to give the M6 Gran Coupe a rest. Strolling through the streets of Prague gave the car a chance to be admired by many bypassers.

The drive back to Munich was far less exciting since we wanted to experience the characteristics of a Gran Tourer, so “normal driving” was instated while enjoying the sublime sound coming from the Bang & Olufsen system.

Next morning BMW M prepared an entire caravan of M6 Gran Coupes. A total of 5 models and two M6 Coupes were getting ready to head towards Nurburgring, for a total of 3,920 horsepower. The “pace car”, an M6 Coupe Frozen Gray, was leading the group and quickly began to set the pace. The speeds quickly rose in the two hundreds and shortly after we got our second 300 km/h. Our test car had the M1 button programmed for comfort plus sport steering feel while the M2 setting was more track focused than anything else. 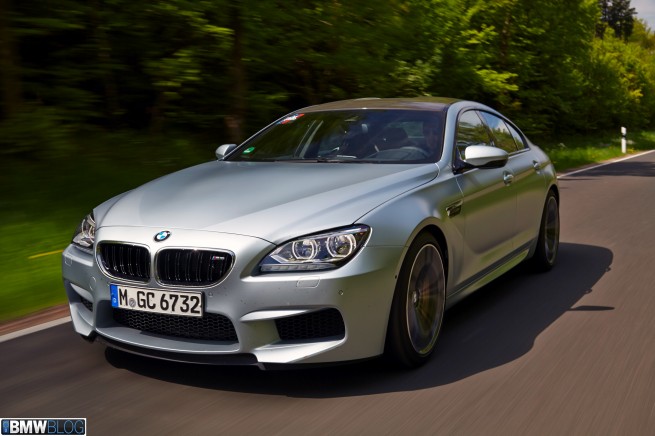 A combination of Autobahn and country roads gave us the driving diversity we have been looking for once again. Long, fast straights, followed by tight and curvy corners where the M6 Gran Coupe excelled once again. Under hard acceleration, the M6 Gran Coupe emits a growling sound, with some of it enhanced by the Active Sound technology as seen in other new M models.

The quickness, speed and balance of the BMW M6 Gran Coupe become even more evident as we conquer mile-by-mile on our way to Nurburgring. 400 miles later and the high-speed cruiser has permanently won our heart.

BMW’s four-door coupe is not alone in its segment, or price range. A thick wallet can buy here a Porsche Panamera Turbo, Maserati Quattroporte, Mercedes-Benz CLS 63 AMG, or the upcoming 560 hp Audi RS7, so the choices are there and more diversified than ever. But if you’re looking to stay loyal to the brand or simply want supercar performance in your daily driver, then the 2014 BMW M6 Gran Coupe fits the bill. 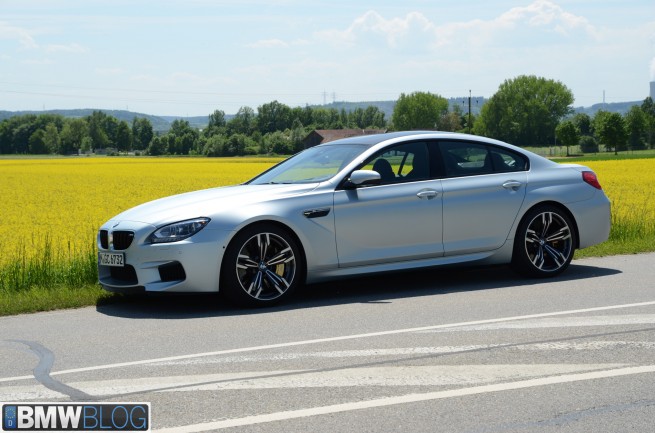