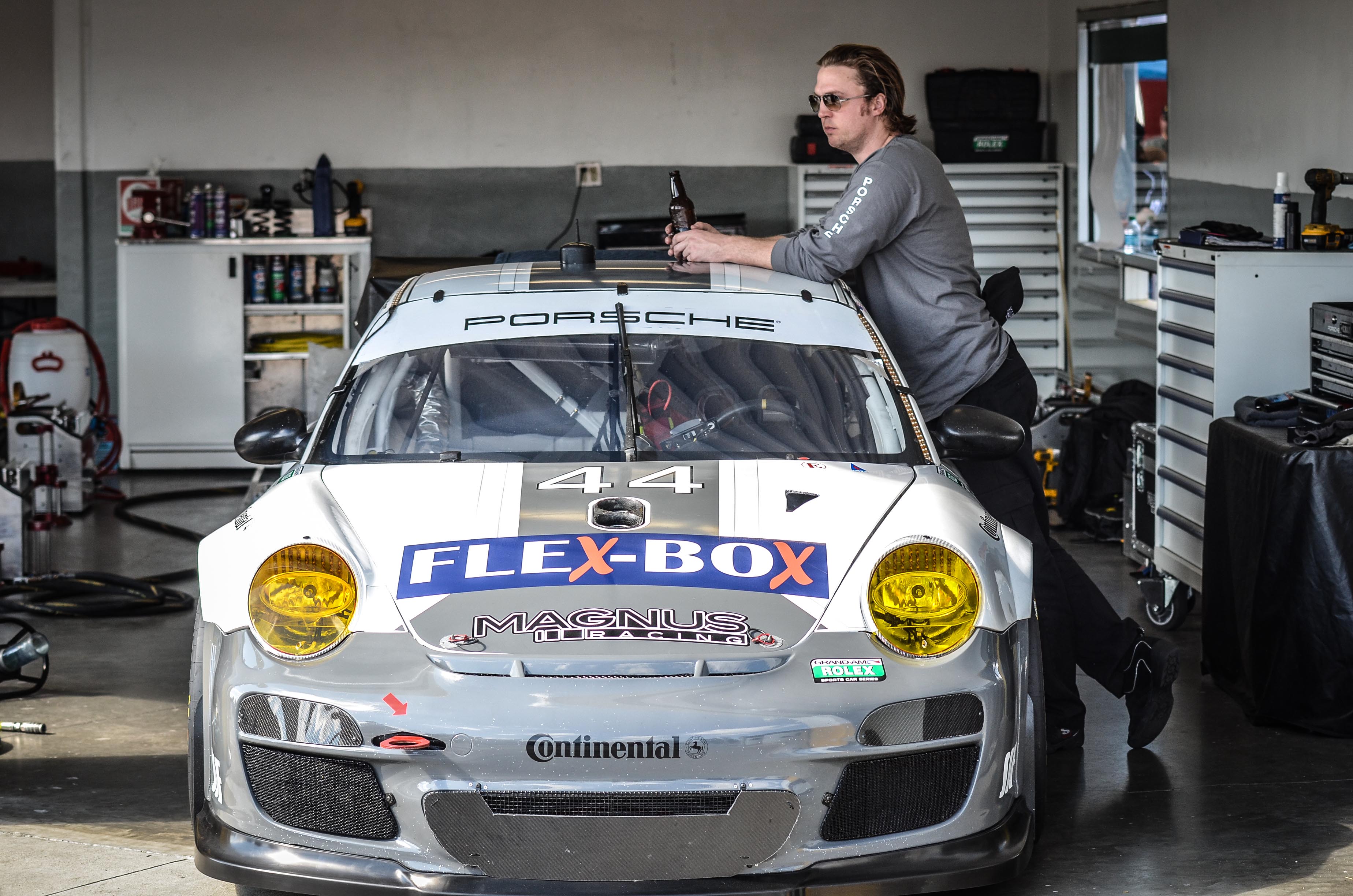 After nearly 23 hours and 50 minutes – the race came down to a successful a single, accurate pit stop for fuel for the BMW-powered  Chip Ganassi Racing with Felix Sabates BMW Riley 01 car with motorsport legend Juan Pablo Montoya in for the final stint. The need for concern? As has become typical for the Rolex 24 Hours in the last few years – the endurance race has become a sprint race to the finish. The 01 car was under attack by Max Angelelli in the Velocity Worldwide Corvette DP car.

Ironically, this late in the race both cars were low on fuel with the 01 Ganassi car leading. In the closing minutes of the race, the Ganassi car dipped into the pits for a splash of fuel, handing off the lead to the Velocity car. Out of the pits and back onto the track, Montoya found himself caught up by the heated battle between the trio of Audi R8’s fighting their own sprint race – luckily, cutting through the GT’s Montoya was back on pace as the #10 Corvette DP dipped back into the pits for fuel giving the 01 Ganassi car a chance to regain the lead for the final two laps. With that the Ganassi team – powered by BMW S62 V8’s won another Rolex 24 Hours of Daytona.

The victory proved historic – while Montoya was the driver to get the Daytona Prototype across the finish line for his third overall win in Daytona, today’s victory marks a fifth with for Scott Pruett. That proves especially significant to Mr. Pruett as it ties him for number of wins with famed Porsche driver Hurley Haywood – legendary for piloting the blue and red striped Brumos cars over the last 40 years. Ganassi’s 02  piloted by  Dario Franchitti, Jamie McMurray, and Joey Hand which had been running very well just behind the 01 car throughout most of the race until a racing incident clipping the wall while exiting the pit lane. After fighting back to within two laps of the leading 01 Ganassi car -the 02 car suffered a mechanical failure with approximately 4 hours to go.

As prosperous as the weekend was for BMW on the Daytona Prototypes front, it was inversely so for the GT class. Turner Motorsport – who was to be represented through two E92 M3’s and with star drivers like Bill Auberlen, Andy Priaulx, and Boris Said ultimately lost ground during practice with only one of the M3’s running versus the two originally planned. The #93 Turner M3 went off during a practice session in which Andy Priaulx crashed heavily due to a potential mechanical failure. While Priaulx was ultimately OK and came away from the accident uninjured – the #93 chassis did not. After a detailed assessment of the damage, the decision was made to not rebuild the car for the Rolex 24 – despite the 93 car qualifying better in class in 18th compared to the 94 car’s 22nd.

The sole Turner M3, and sole M3 in the whole of the Rolex 24, fought hard throughout the day, night and back into the day. However, it was no walk in the park as early into the night session the car developed mechanical issues resulting in a prolonged pitstop in which the car was brought back to the garage for more work. This delay put Turner many, many laps down against the GT competition. Ultimately, it was largely a battle between the Ferrar 458’s of Team Corsa Michelotto and AIM Autosport the new-to-Grand-Am Audi R8’s. Almost a 1-2-3 finish in GT, the RumBum R8 exhausted its fuel on the final lap pushing them down to seventh in class with WeatherTech and Audi Sport Customer R8’s making it a 1-2 with the AIM Autosport 458 rounding out the podium in GT.

As far as GX class, the new, somewhat less regulated class – it was a mix of Porsche Caymans and Mazda SkyActiv diesels with the Napleton Racing Cayman taking first in class while James Clay, owner of the Continental Tire Challenge Series team Bimmerworld was one of the drivers campaigning the Bullet Racing Porsche Cayman which came second in GX class. The Mazda diesels, reminiscent of the Audi R18’s running in the World Endurance Championship with their eerily quiet speed through the corners, had a poor showing with two retirements earlier in the race and the third sometime later. Despite a difficult weekend, it’s a welcome sign to see new technologies like diesel racers finding their way into Grand-Am.

All in all, the 2013 Rolex 24 Hours of Daytona proved to be an exciting race. Though predictable in its nature, the sprint race that comes in the closing hours of the race is nothing short of impressive to see so many contenders still in it all the way down to the finish. Beyond the finish, the diversity seen in the field with the new GX class and the addition of the Audi R8’s in GT plus a strong showing for the Corvette DP’s keeps things interesting across the entire field. No doubt the 2014 24 Hours of Daytona will be even more exciting as the merger between Grand-Am and the American Le Mans Series will be in full effect this time next year. Here’s hoping to see a Z4 GTE or M3 taking its class next year!