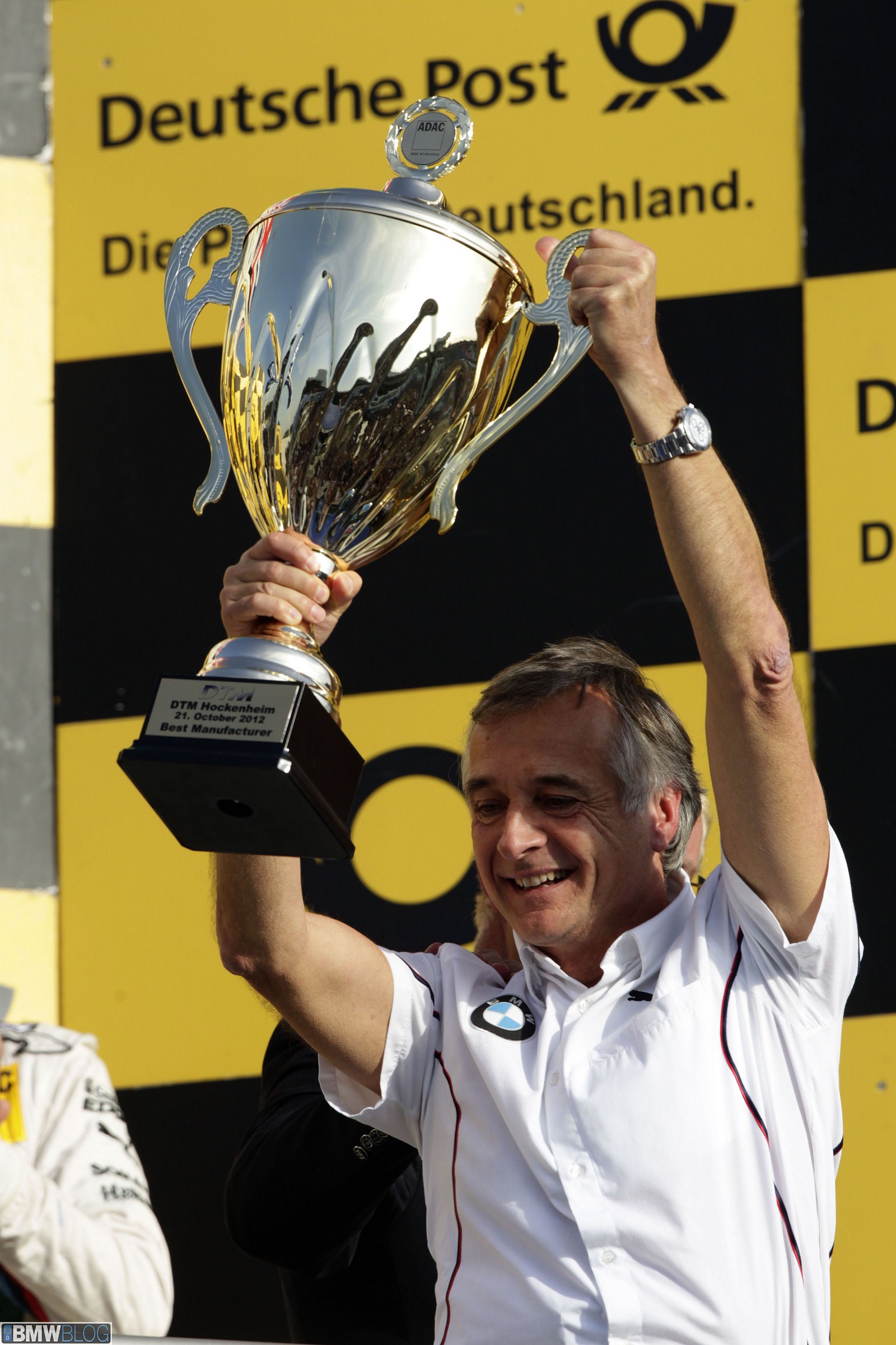 After 20-year absence from DTM, BMW returned this year and won the exciting racing championship. In a electrifying race at Hockenheim, Bruno Spengler finished first ahead of Gary Paffett from HWA Mercedes.

Here is a quick recap from Autosport:

The key to the Canadian’s race was a great getaway from third on the grid as he passed the slow-starting Paffett to slot in behind polesitter Augusto Farfus.

While Paffett dropped from second to fourth, Spengler was gifted the lead by fellow BMW man Farfus at the Mercedes Arena on the opening lap.

HWA driver Paffett climbed to third when Mattias Ekstrom – who had already hit Joey Hand at Turn 1 – pushed the American and himself wide at the Spitzkehre.

The Briton then passed Farfus during the first round of pitstops to climb to second, escaping censure from the race officials despite being initially investigated for an unsafe release from his pit stall that resulted in him and his rival running side-by-side momentarily.

Paffett put Spengler under immense pressure following the second stops, trimming his deficit from 4.1 seconds to 2.0s within just five laps and then continuing to close until he was within 1.1s of the black BMW.

He could get no closer though and was unable to prevent Spengler from taking his fourth win of 2012 and securing the championship by just four points.

Farfus was a comfortable third in his RBM-run M3 while Jamie Green, the third driver to start the race with a chance of the title, drove superbly to climb from ninth to fourth during the race. His highlight was an excellent move on Hand’s RMG BMW at the Spitzkehre during the opening stint. 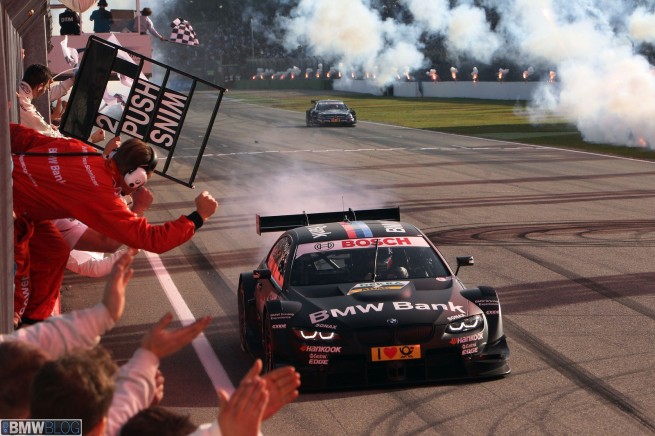 Dirk Werner made it two Schnitzer cars inside the top five. He passed Edoardo Mortara and Hand at the first round of stops and gained a further spot when Ekstrom retired with a loose right-front wheel.

Mortara was sixth, less than a second ahead of the BMW of the impressive Andy Priaulx, Hand, Ralf Schumacher and Christian Vietoris.

David Coulthard retired from his final DTM race after being spun by Timo Scheider at the Mercedes Arena. The Audi man was given a drive-through penalty for causing the collision.

Adrien Tambay and Mike Rockenfeller both retired early on, each Audi driver a victim of contact, while Miguel Molina’s race ended when he slid into the Sachs Kurve gravel at mid-distance. 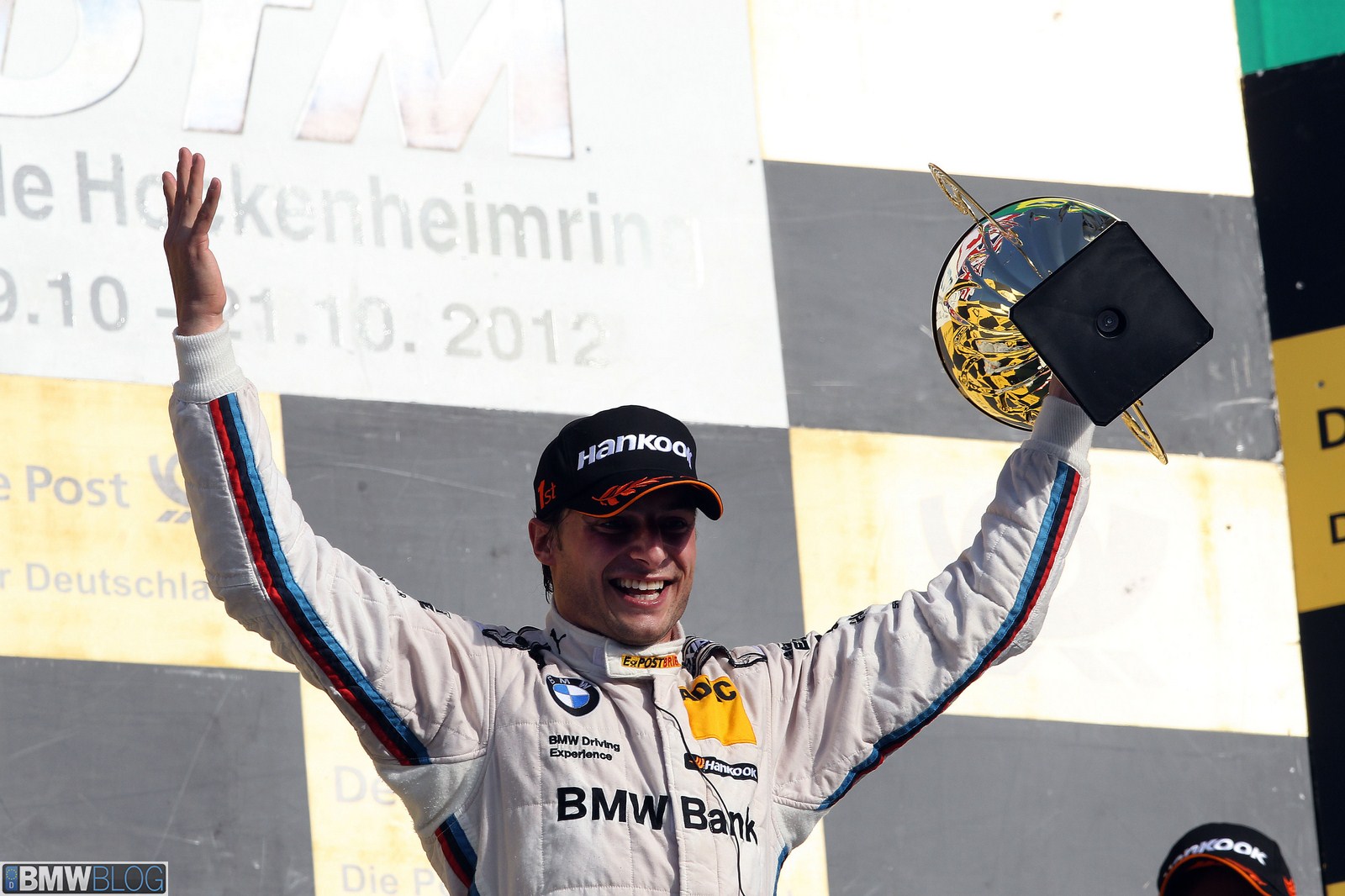 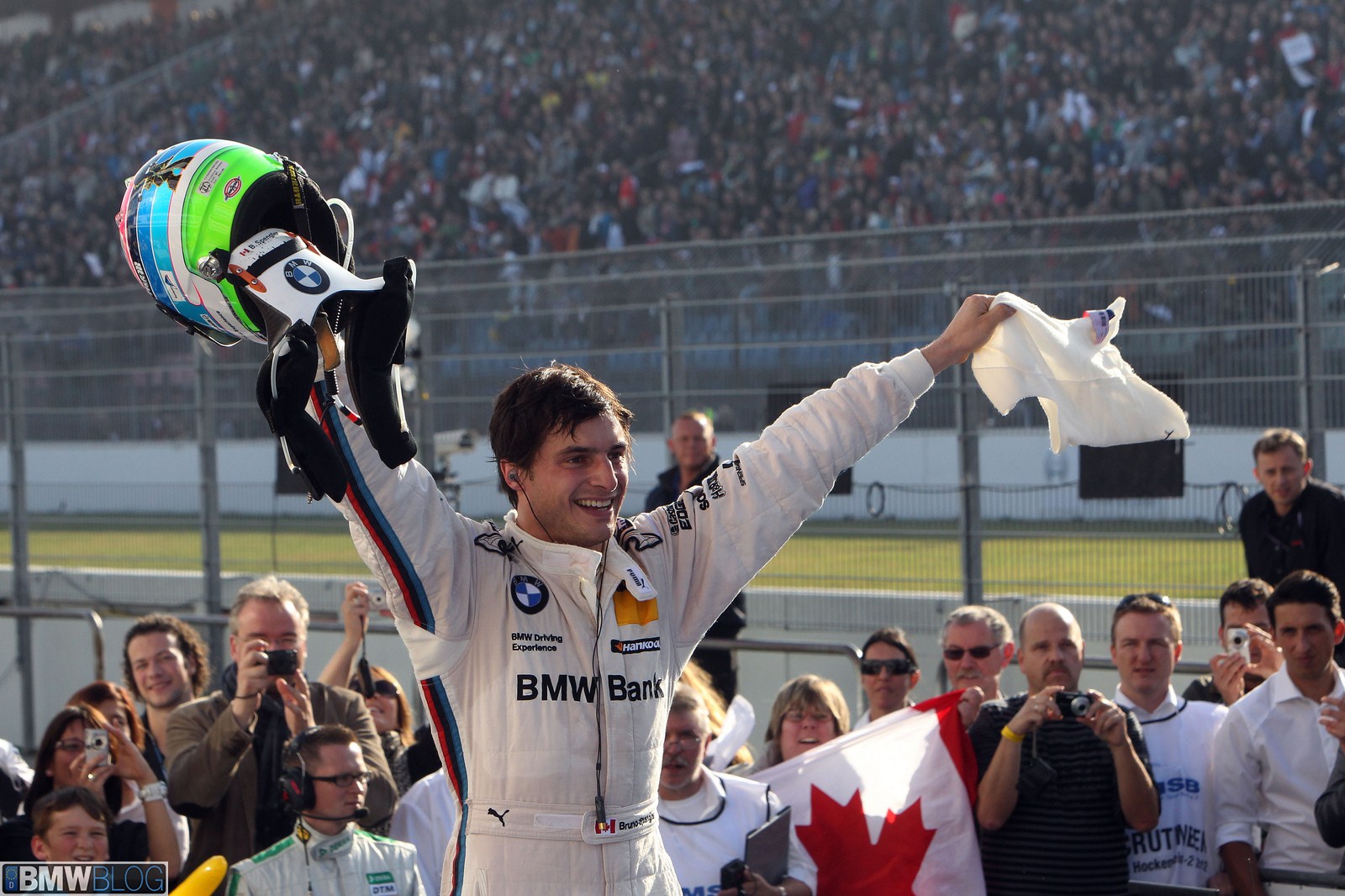 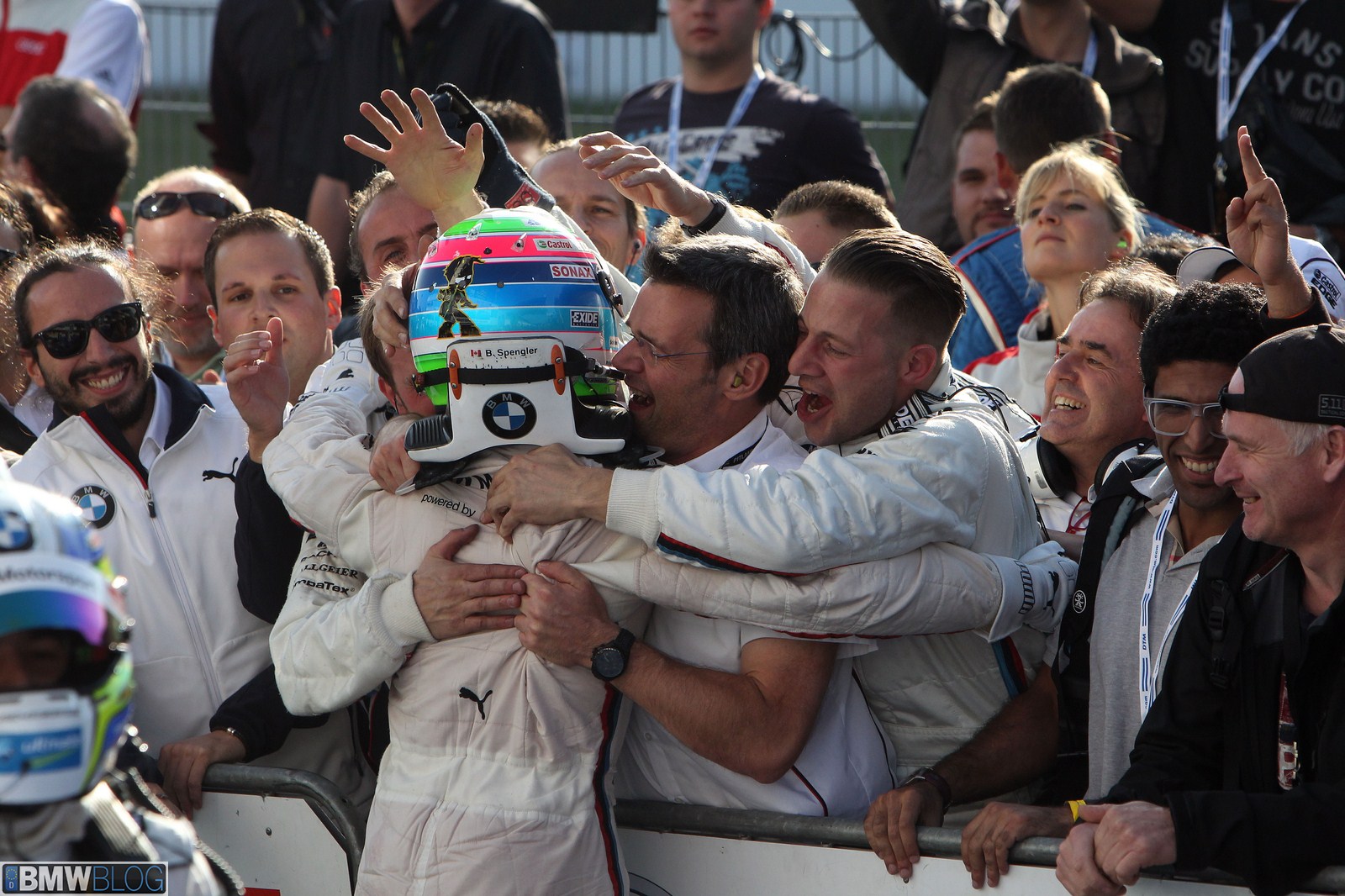 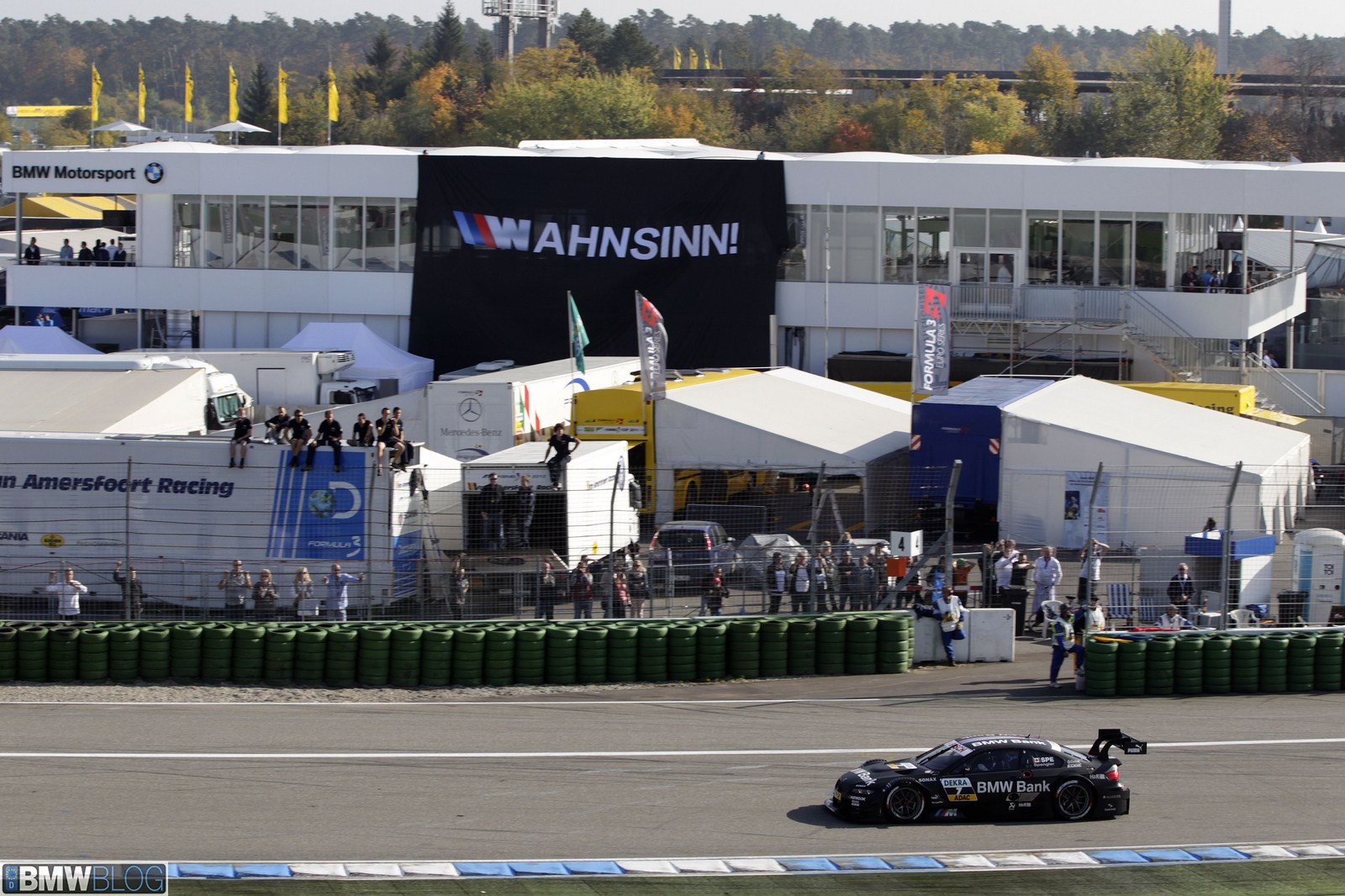 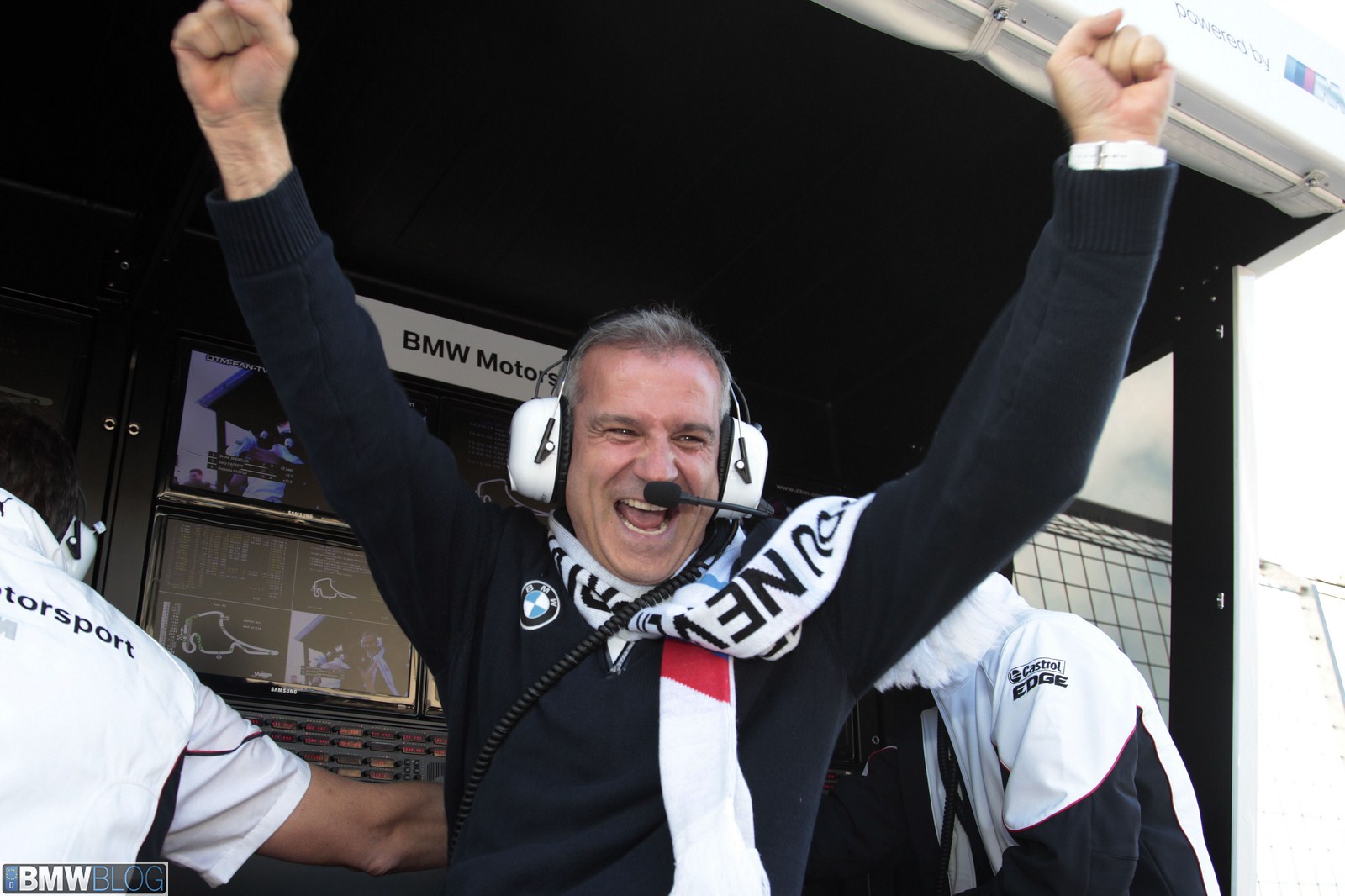 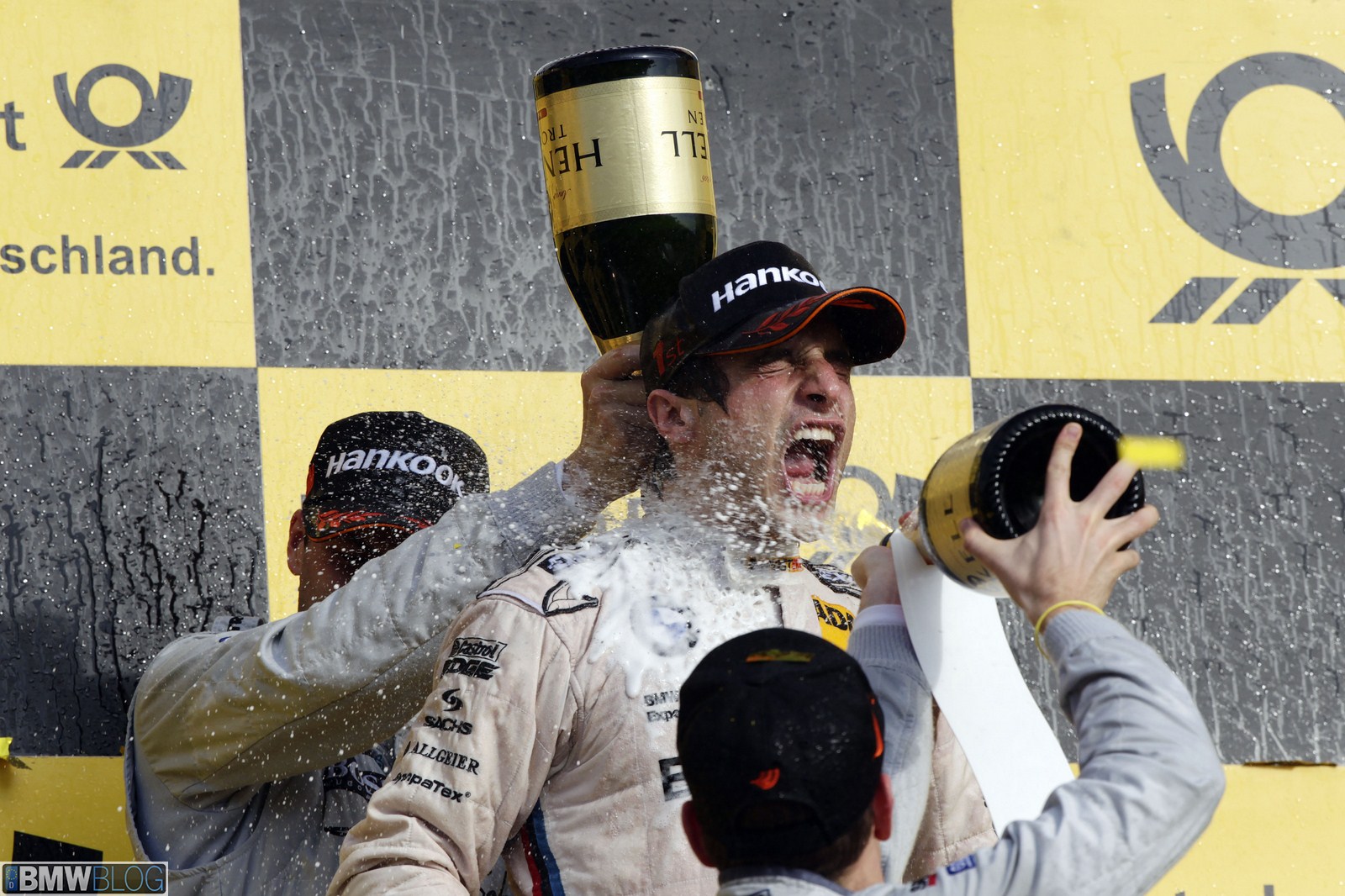 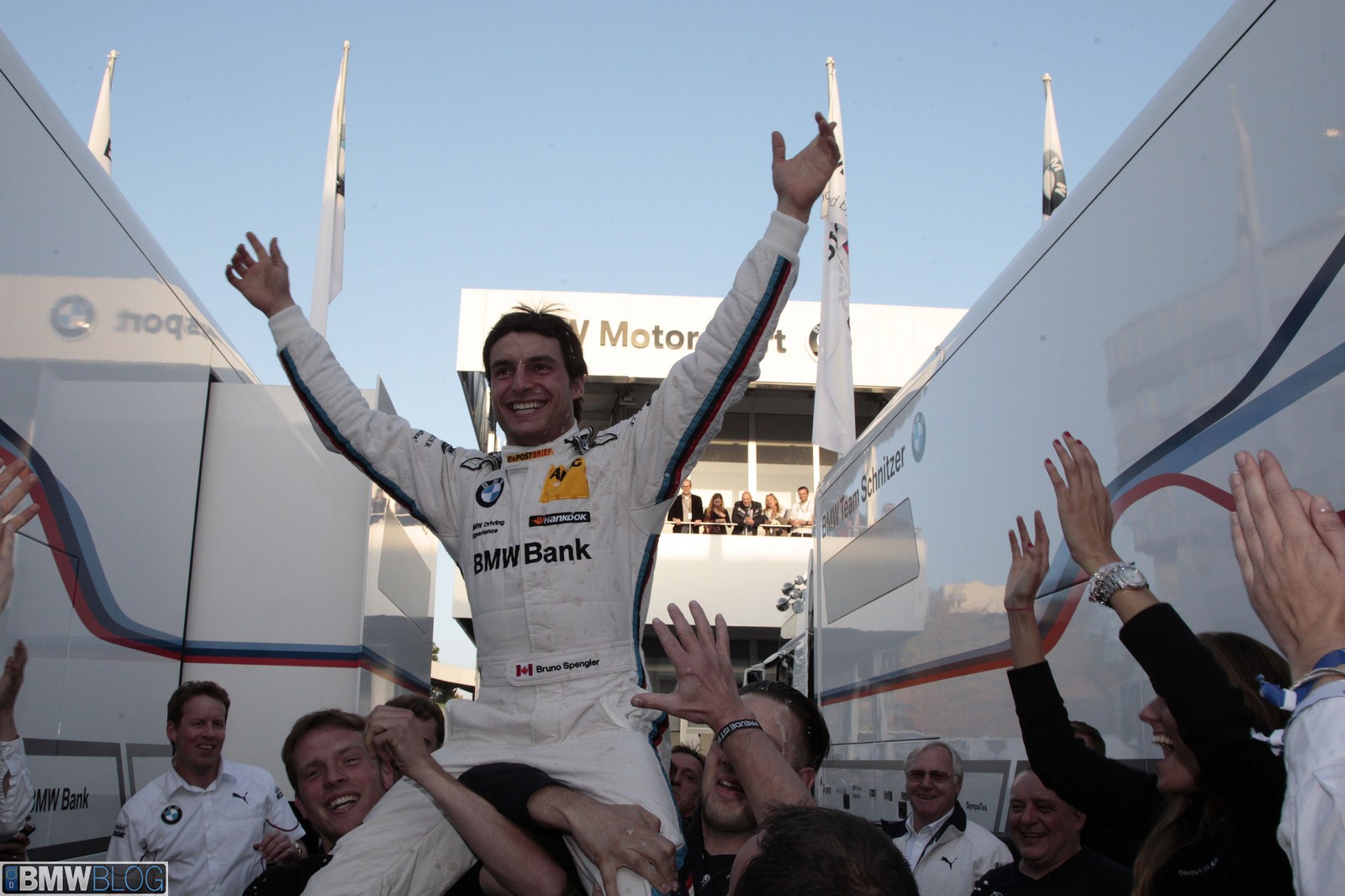 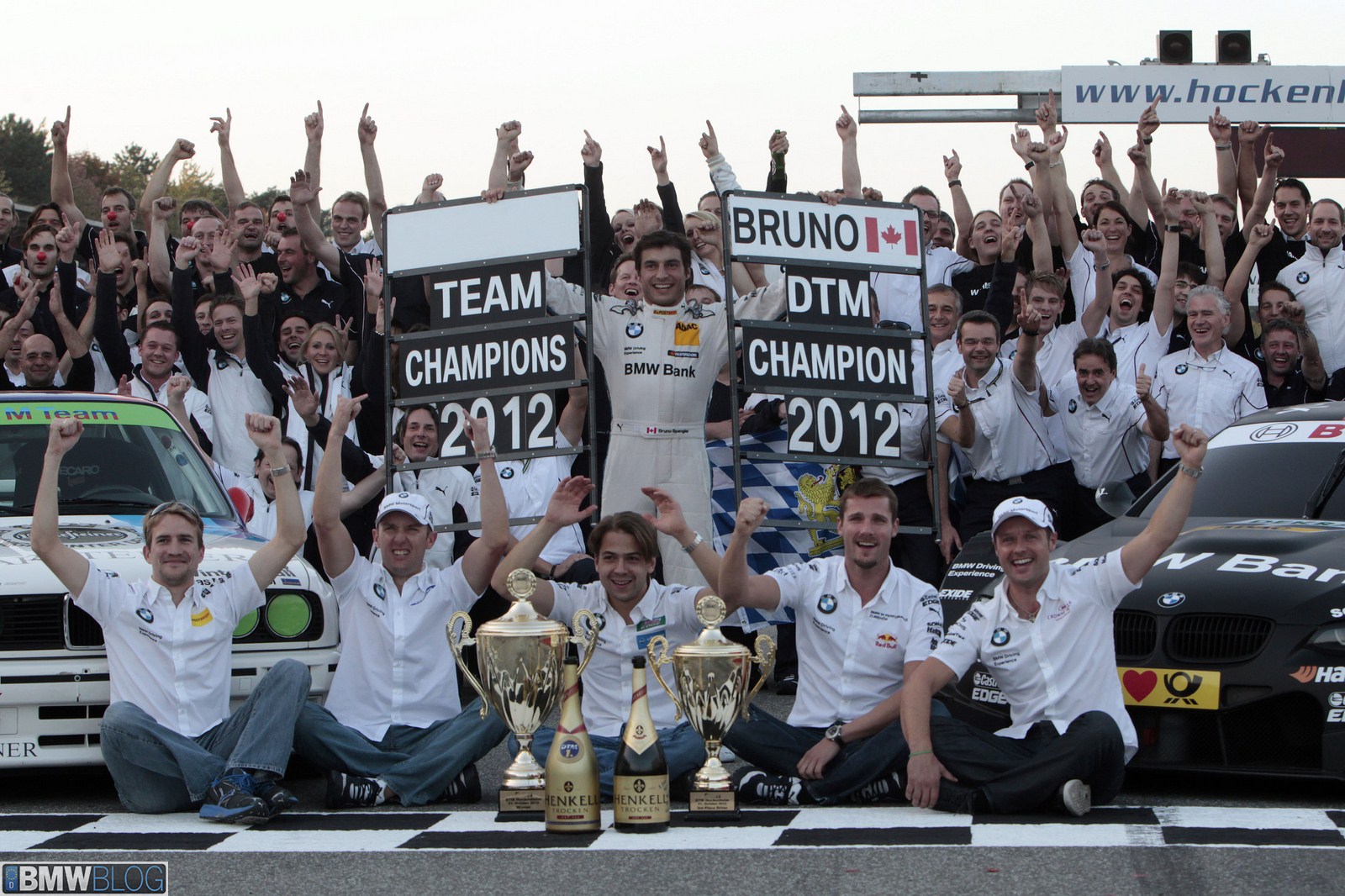 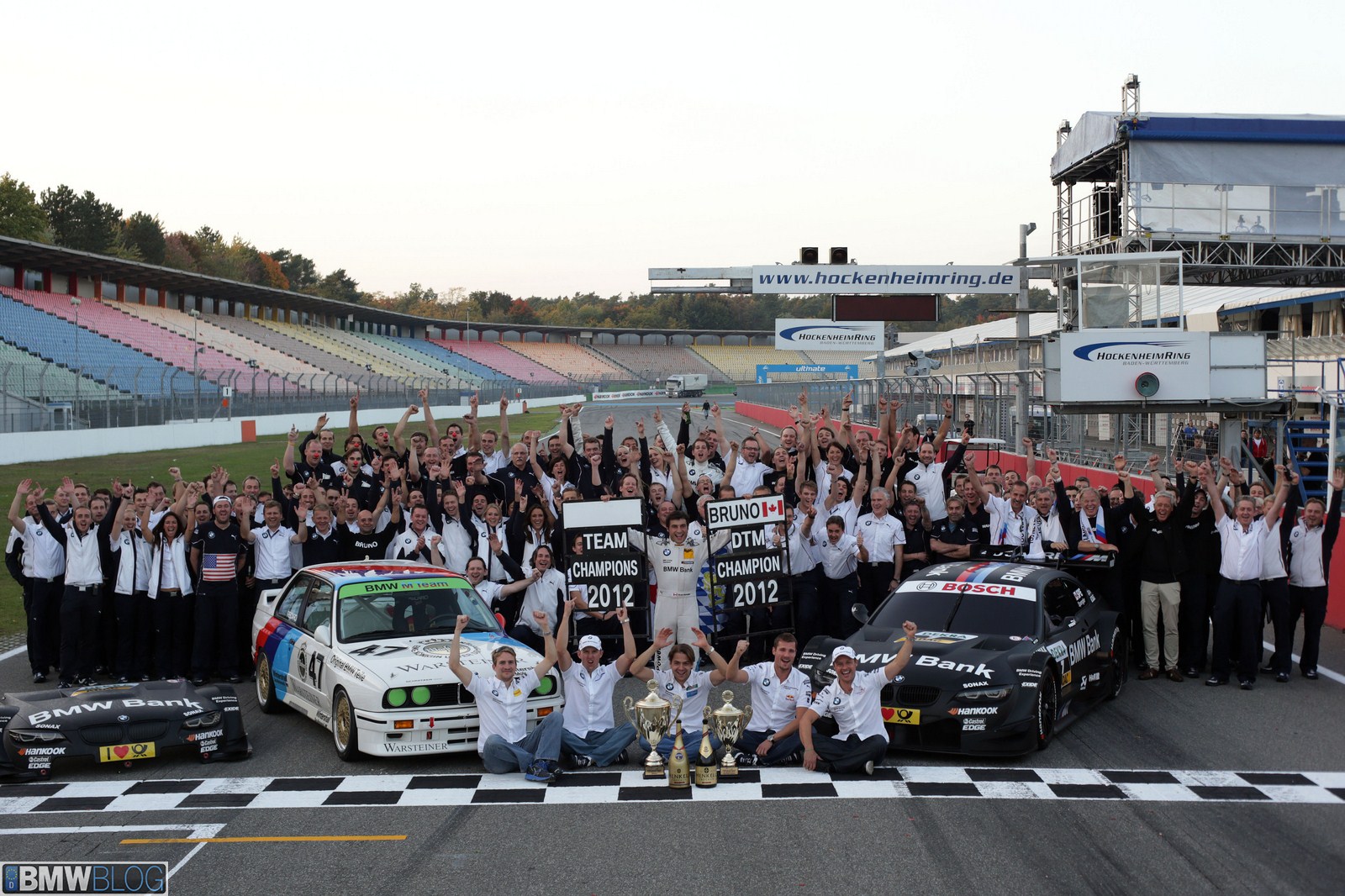 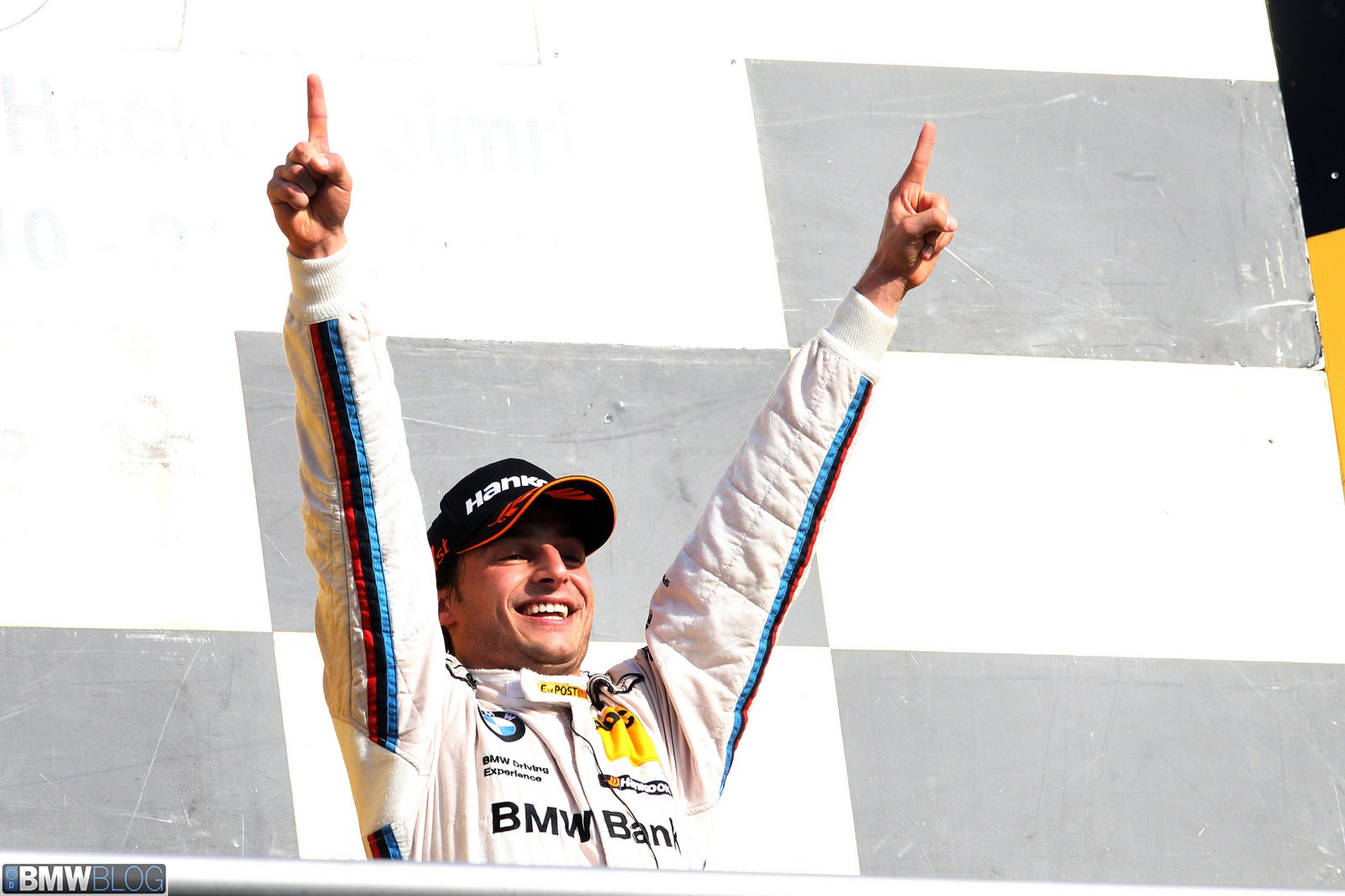 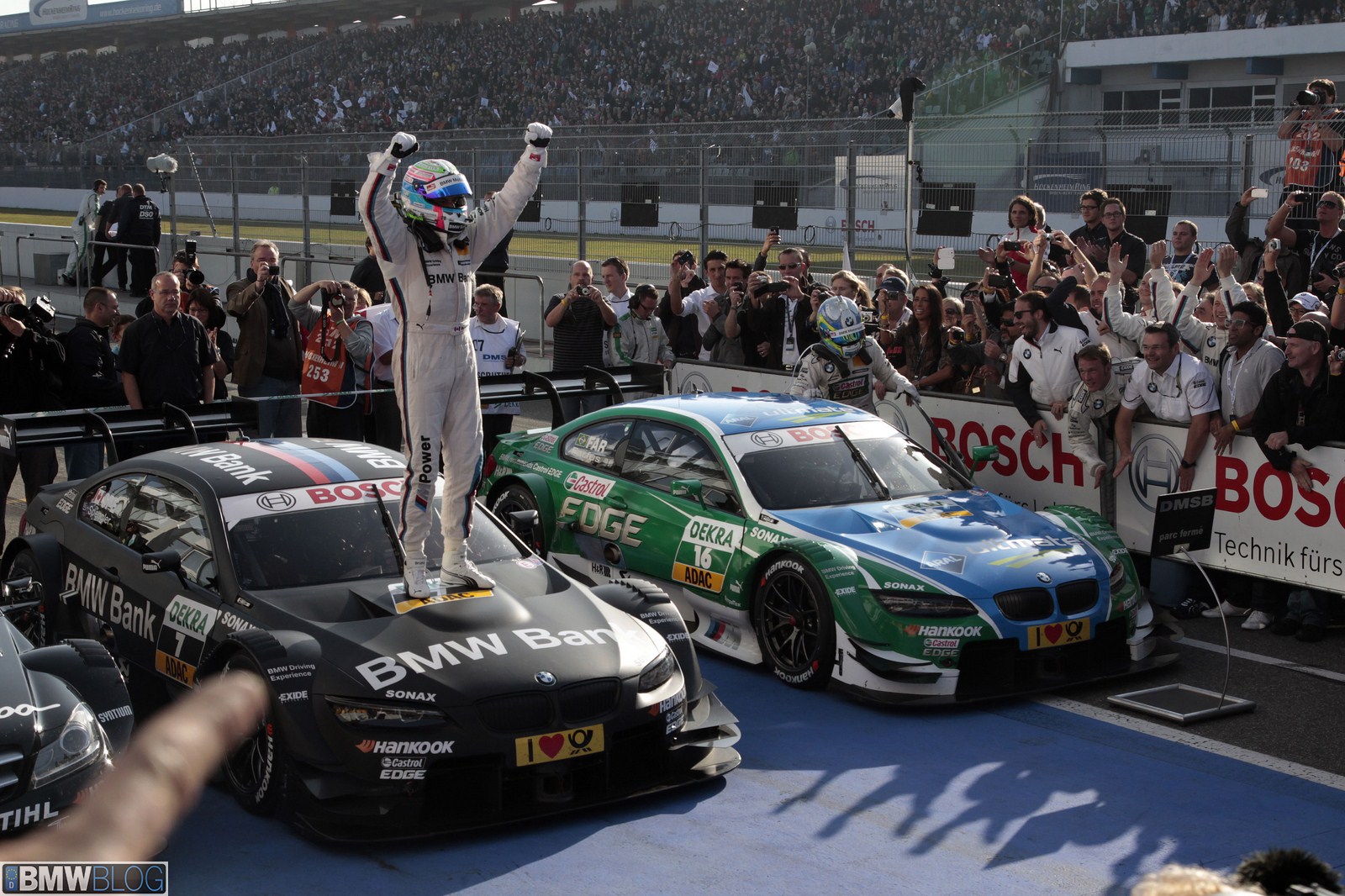 Hockenheim (DE), 21st October 2012. A dream come true: A fourth win of the season at the wheel of the BMW Bank M3 DTM in the tenth and final DTM race of the year saw Bruno Spengler (CA) win the drivers’ title and cap an outstanding comeback season for BMW Motorsport. BMW also won the manufacturers’ title in Hockenheim (DE), while BMW Team Schnitzer ended the season at the top of the team standings after a dramatic finale. Augusto Farfus (BR), who started from pole position, came home in third to finish the season on the podium. Gary Paffett (GB, Mercedes), who was leading the standings coming into the race, crossed the finish line in second.

In a remarkable finale, Spengler was able to leapfrog Paffett at the top of the overall standings. A magnificent start allowed the Canadian to move into the lead on lap one, and he then set about pulling away from the chasing pack– a task made far easier thanks to the excellent pit stops performed by BMW Team Schnitzer. Paffett closed the gap to Spengler consistently after the second round of pit stops, but was unable to catch and overtake the champion, who showed nerves of steel in a dramatic climax to the season. Spengler ends the year on 149 points, just four more than Paffett in second.

After Volker Strycek (DE, 1984), Eric van de Poele (BE, 1987) and Roberto Ravaglia (IT, 1989), Spengler is now the fourth driver to clinch the DTM title in a BMW. BMW Team Schnitzer came through at the end of the season to win the team competition with 178 points.

In the manufacturers’ competition, BMW ended its comeback season in the DTM at the top of the championship on 346 points. Spengler, Farfus, Werner, Priaulx and Hand all finished in the points in Hockenheim – the first time five BMW drivers had come home in the top ten. Together, they picked up 60 points – enough to clinch the manufacturers’ title, despite BMW lining up with just six drivers, while its two rivals fielded eight cars at each race.

BMW Motorsport can look back on a DTM season, in which the three teams and six drivers exceeded all expectations with the BMW M3 DTM. As well as Spengler, who had previously won at the Lausitzring (DE), Nürburgring (DE) and in Oschersleben (DE), Farfus also joined the list of BMW DTM winners in Valencia (ES). BMW also scored a further seven podiums, five pole positions and two fastest laps. All six BMW drivers finished in the points at least twice over the course of the season, with all three teams achieving podium finishes. BMW Team Schnitzer recorded six podiums, while BMW Team RMG and BMW Team RBM both claimed three each.

In winning the 2012 title, the BMW M3 has once again proven that it is at home in the DTM. To date, the most successful touring car of all time has 46 DTM wins to its name. Like Spengler this season, van de Poele 1987 and Ravaglia 1989 were also at the wheel of this BMW model when they claimed their DTM titles.

“Sensational. Awesome. Unbelievable. I still cannot believe what has just happened here. Massive congratulations to Bruno Spengler and BMW Team Schnitzer on winning the Drivers’ and Team titles. This is a big day for everyone at BMW Motorsport. We returned to the DTM after an absence of almost 20 years and wanted to be competitive as quickly as possible. Now we are here in Hockenheim, and I am talking about winning three titles in our comeback season. BMW Motorsport has written another chapter in motorsport history today. I am unbelievably proud of my team. It is going to be a long night.”

“I am speechless. This is a very big moment in the motorsport history of BMW Team Schnitzer. To win the title in a final race like that – in such a close battle that came down to Bruno’s nerves and perfect pit stops – fills me with an incredible amount of pride. It still hasn’t sunk in what just happened here.”

“What a fantastic result. I am happy for Bruno, for BMW for winning the manufacturers’ championship and, of course, for BMW Team Schnitzer. I am also happy for BMW Team RBM because in the end I think we played an important role in the way this race unfolded. Unfortunately we didn’t have the top pace to stay up front. It was very close in the pit stop with Gary (Paffett) but it was fair. I am happy with Augusto’s podium and also with Andy’s seventh from 13th on the grid. I am now looking forwards to the winter and next season.”

“We were all able to reap the rewards of the work we have put in all year long. BMW sent the best car out onto the track this season. This title belongs to us all. The incidents in the second half of the season have seen our team drop out of the race for the title, and we saw again today we still have some work to do before next season – particularly on our pit stops. Generally speaking, however, I would like to congratulate the team on our first season in the DTM. My team did a great job. I would obviously also like to congratulate Bruno Spengler, BMW Team Schnitzer and BMW Motorsport.”

“I can hardly believe we have won the title with BMW in our first year back in the DTM. Congratulations to my rival Gary Paffett, who performed brilliantly throughout the entire season and put up a fair fight. He would also have been a worthy champion. He is a great sportsman. He put me under a lot of pressure in the final race today. I spent a lot of time looking in the rear-view mirror and he just kept getting closer. However, I was able to maintain my pace and close the race out. My pulse was really racing. Thank you to BMW Team Schnitzer. My team did a great job all season. Once again, everything went exactly to plan today. In a race, in which we were under extreme pressure, the team did another amazing job on the pit stops. You never win on your own – only as part of a team. I am totally confused and have no idea how I should be feeling. Standing on the top step of the podium, raising the trophy to the sky and seeing all the many fans cheering for me is an amazing experience. I have waited for this for so many years. It is simply sensational.”

“Congratulations to Bruno Spengler on winning the title. BMW’s return to the DTM has been awesome. Having five cars in the top ten in today’s race was crucial to winning the Manufacturers’ title. And to top it all off I was the best DTM rookie. Everything is perfect today. Ending the season on the podium is just fantastic.”

“What happened today is simply unbelievable. It feels great to be part of this magnificent project. The whole year has just been a dream for me. I can hardly believe my team-mate Bruno Spengler has been crowned champion in BMW’s first year back in the DTM. I am particularly proud to have played a role in BMW Team Schnitzer winning the team competition. We made motorsport history today. I will never forget this day.”

“I have to say well done to Bruno and to BMW Motorsport for the fantastic job they have done. I am proud to be a part of this amazing programme. As for me, I was confident of a good race after a great warm-up. I had a great start, but a really awkward first lap. I am happy to have finished in one piece. The car was very good.”

“Well done Bruno and everyone at BMW Motorsport. This was the way I wanted my season to end. I equalled my best qualifying session and then had my best finish. In the race it was the best car I have had this year. Unfortunately we had something happen on the first pit stop which cost us a lot of time. There was also a little issue in the second pit stop, which cost more time, then we were just in traffic and it is tough to race past those guys. This new team has stayed tough and bounced back from all our problems. I am pretty proud of what we have done this year.”

“Congratulations to Bruno, BMW Team Schnitzer and everyone at BMW Motorsport. I know exactly how Bruno is feeling now. It is the best feeling you can have as a racing driver. To win the title with BMW in the very first year is simply sensational. I am pleased my start number ‘1’ will remain in the BMW family. Unfortunately my own season has been rather mediocre. The second half of the season, particularly with the four retirements, was very depressing. However, that is not important today.”