Tourings. You either hate them or love them, and I for one have never been a fan of the sports wagons that Europeans simply adore. Whenever I had the choice between a BMW SUV or a bimmer sports wagon, I always picked the very same type of vehicle that is so popular among Americans: an SUV or in BMW’s world, SAV, short for Sports Activity Vehicle.

But as a reviewer of BMWs I have to keep an open mind and not let my personal choices interfere with my writing. Therefore, in my last trip to Munich, I decided to give the Tourings another shot, but not just any touring, THE BMW M550d xDrive. 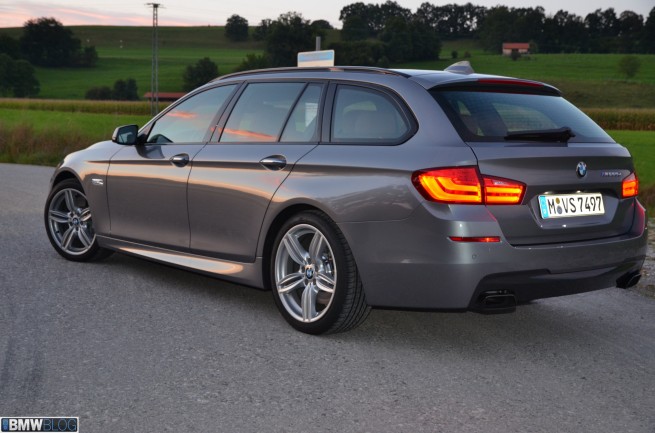 The Heart Of The Uber Diesel

The M-tuned touring diesel is one of the first models to launch from the new M Performance Automobiles family. While not a “pure M”, the M550d carries some of the traits of an M model. First, it has lots of power and mindblowing torque, all thanks to the new and innovative N57s 3.0 liter tri-turbo engine that develops 381 horsepower and 740 Nm (546 lb-ft) of torque served up between 2,000 and 3,000 rpm. Those figures need no further presentation.

To handle all that torque, while still providing decent MPG figures, the Bavarians matted the diesel engine to the ZF 8-speed automatic transmission. The car we tested also make use of BMW’s rear-wheel biased xDrive system that helps quite a bit during spirited driving.

All the BMW tourings share the same driving dynamics as their sedan’s siblings, but make no mistake, the M550d Touring is much more than just another touring.

Along with the power upgrade, the M550d takes advantage of M-tuned technology: suspension, bodyshell mounting, engine and transmission mounting, springs and dampers. Driving the car through fast corners and back roads gave me the opportunity to experience one of the most balanced sport wagons ever built by BMW, with virtually no body roll. Despite its overweight body (around 4,350 lbs), the M-tuned chassis handles the car superbly, a feeling also enhanced by the hydraulic power steering that has more in common with the M5 than the regular 5 Series sedan. It is still not up to the standards seen in M cars, but satisfying enough for the touring demographic. 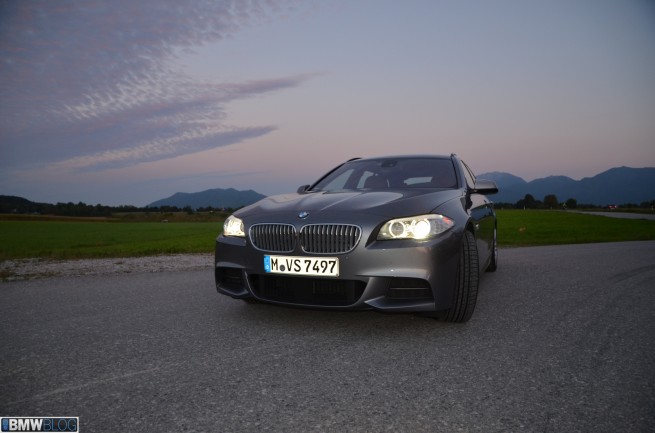 The xDrive system lives up to its reputation and even on slippery roads, it handled the corners with confidence and safety, just as you would expect from a touring, and an all-wheel drive platform.

Jumping onto the Autobahn and into triple digits speeds showed me how much soul this car really has. Official times say 0 to 62 mph in 4.7 seconds, but from behind the wheel, the M550d felt insanely quick. The throttle response is instant, throwing you back in your seat, thanks to that high torque at low revs. Reaching 155 mph (250 km/h) would make you think that the redline is near, but in the case of the M550d, the rev needle was below the 5,000 mark.

I can even say that the car lives for high speeds, with still effortless acceleration when above 120 mph. Of course, there is a slight lag, typical to not just a diesel engine, but a turbocharged unit as well. But then again, this is not an M5 nor it was built on the same principle, so most of the drivers won’t take an issue with this.

Over a few hundred miles, at high speeds and revs, the M550d Touring showed us a fuel consumption of around 25 mpg.

BMW’s Adaptive Drive system is standard on the M550d xDrive Touring and comes with the usual Comfort, Normal, Sport and Sport + modes. A wide range of pre-defined settings that cater to all, from moms driving her kids to school, to the young buck that jumps behind the wheel to enjoy a long, sporty road trip.

Would I Buy One?

If one would have asked me that question months ago, the answer would have been simple and straightforward: “Great bimmer tourings, but they don’t fit my style.” Well, the often used “Never say never” phrase couldn’t come at a better time. In just a few days and over a few hundred miles, the M550d Touring has won my heart, not only with its power, but also with its elegant and aggressive design, and versatility.

The only downside: not available in the United States. So if you’re looking for a great BMW sports wagon, either move to Europe or settle for one of the great BMW SAVs we have here. 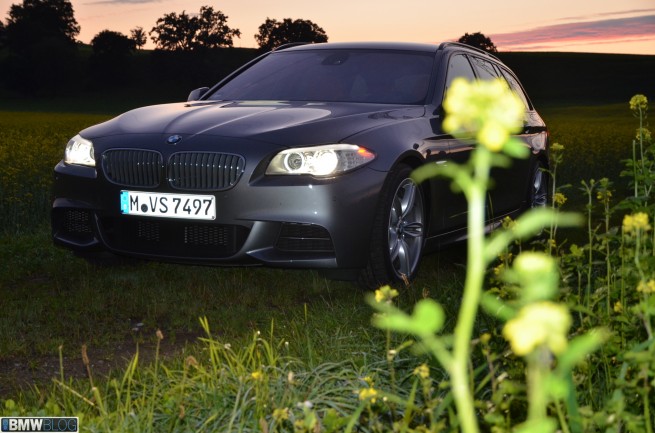